A writer by trade, who splits her time between New York and Rhode Island, fell hard for Little Compton. 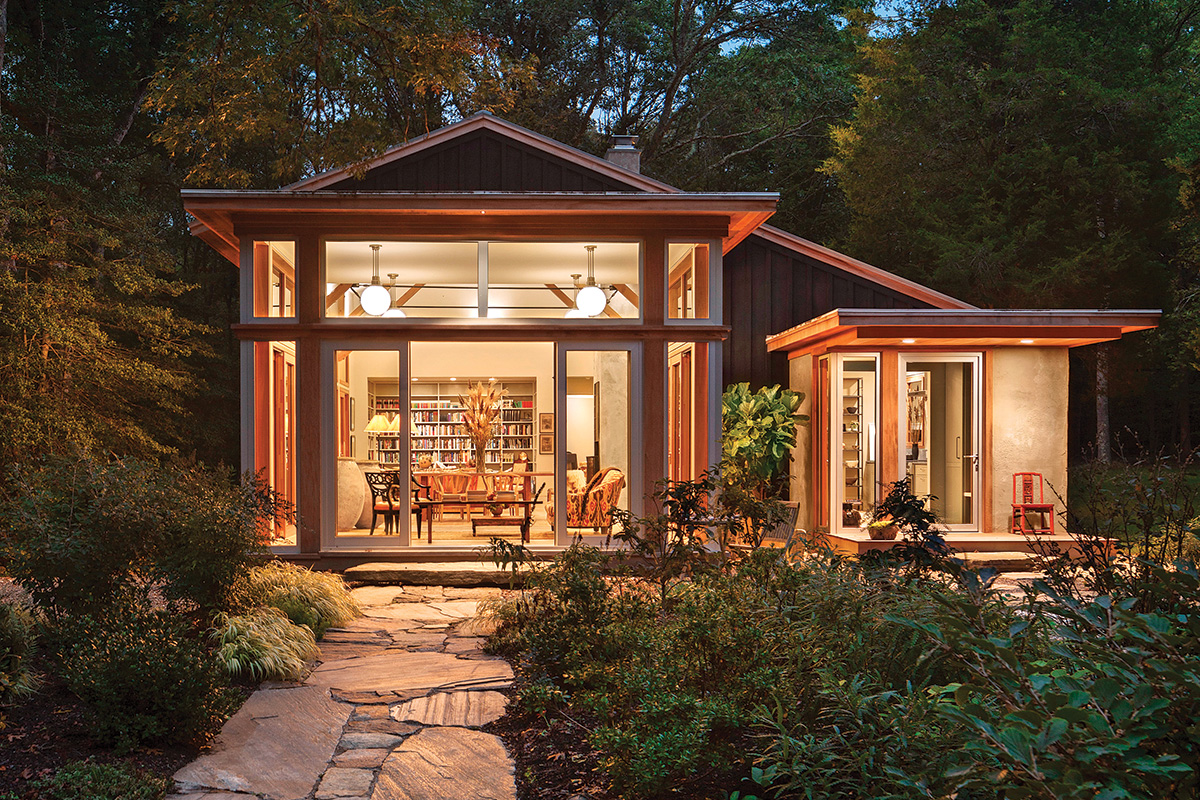 The reimagined barn is now a two-bedroom primary residence. A sunroom (left) and mudroom (right) were new additions to the existing structure. Photography by Anthony Crisafulli.

Writer’s Retreat
Had Thoreau walked South Shore Beach and experienced the serenity of Little Compton’s secluded spaces, perhaps he would have located his transcendental experiment there, 100 miles south of Walden Pond, as the owner of this retreat did. 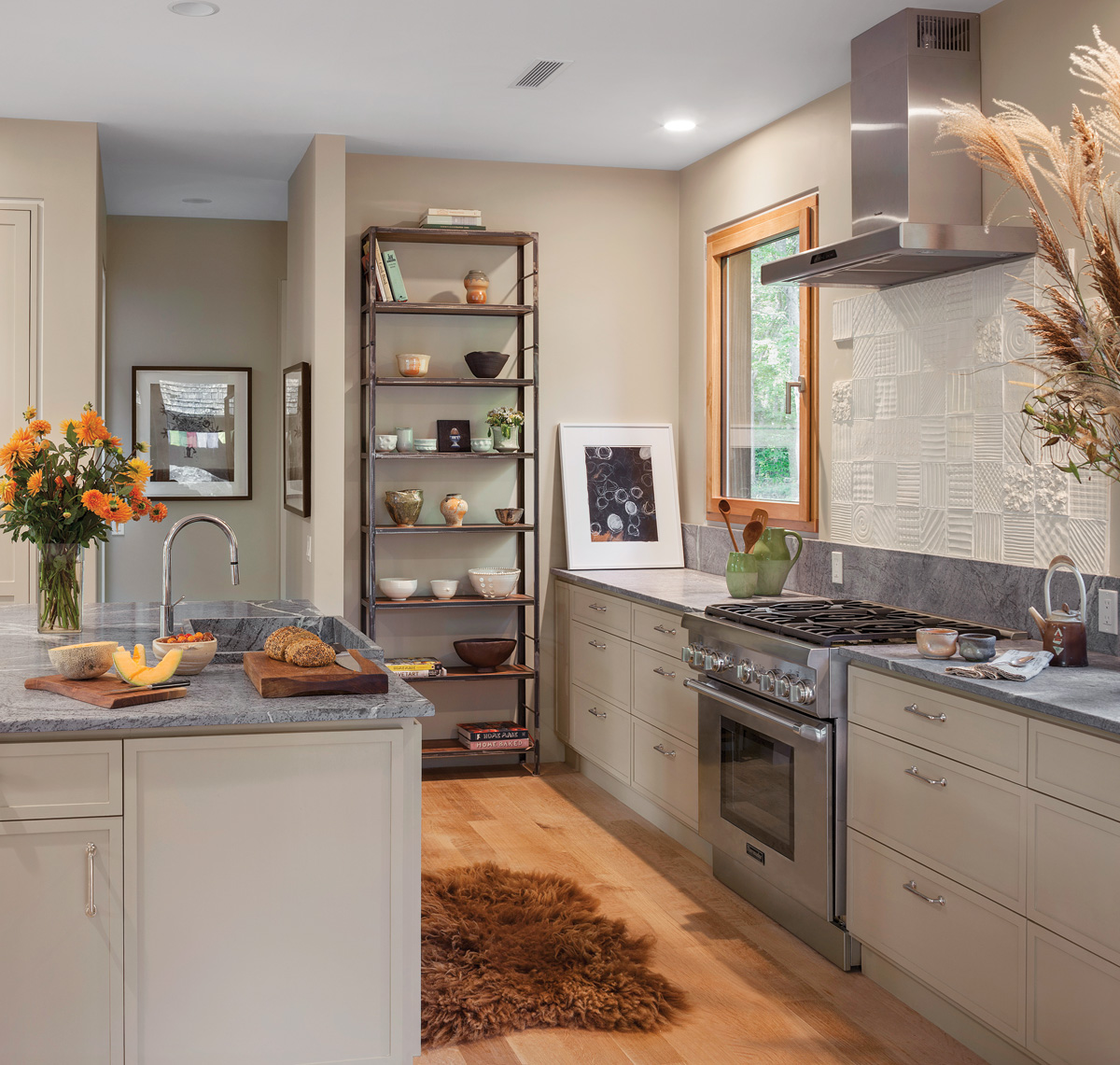 In the kitchen, an oversized square island was included to accommodate large gatherings, and the refrigerator was intentionally located out of sight in a pantry. Avoiding overhead cabinets keeps the space open. The tiles behind the stove were crafted by a local ceramist, and Goff designed the steel shelves, which play off the steel trusses overhead and the steel detailing on the fireplace. Photography by Anthony Crisafulli.

A writer by trade who splits her time between New York and Rhode Island, she fell hard for Little Compton years before this project came to be. Her first home in town had been on the water, and when she was ready to downsize (but not leave) she looked inland. Down a long driveway bordered by a stonewall on one side and a creek on the other, she found a simple, one-bedroom cabin on nine very private acres. In addition to the cabin, the property housed an RV barn with gloriously high ceilings (RVs are tall, after all). Charmed by the location and intrigued by its possibilities, she approached architect Gale Goff.

“I thought it was this wonderful opportunity to be creative,” says Goff.

But it wasn’t so much the cabin that stoked her creativity; it was the barn. Tucked behind the house and flanked by a natural curtain of trees, the barn’s potential was ripe but untapped. 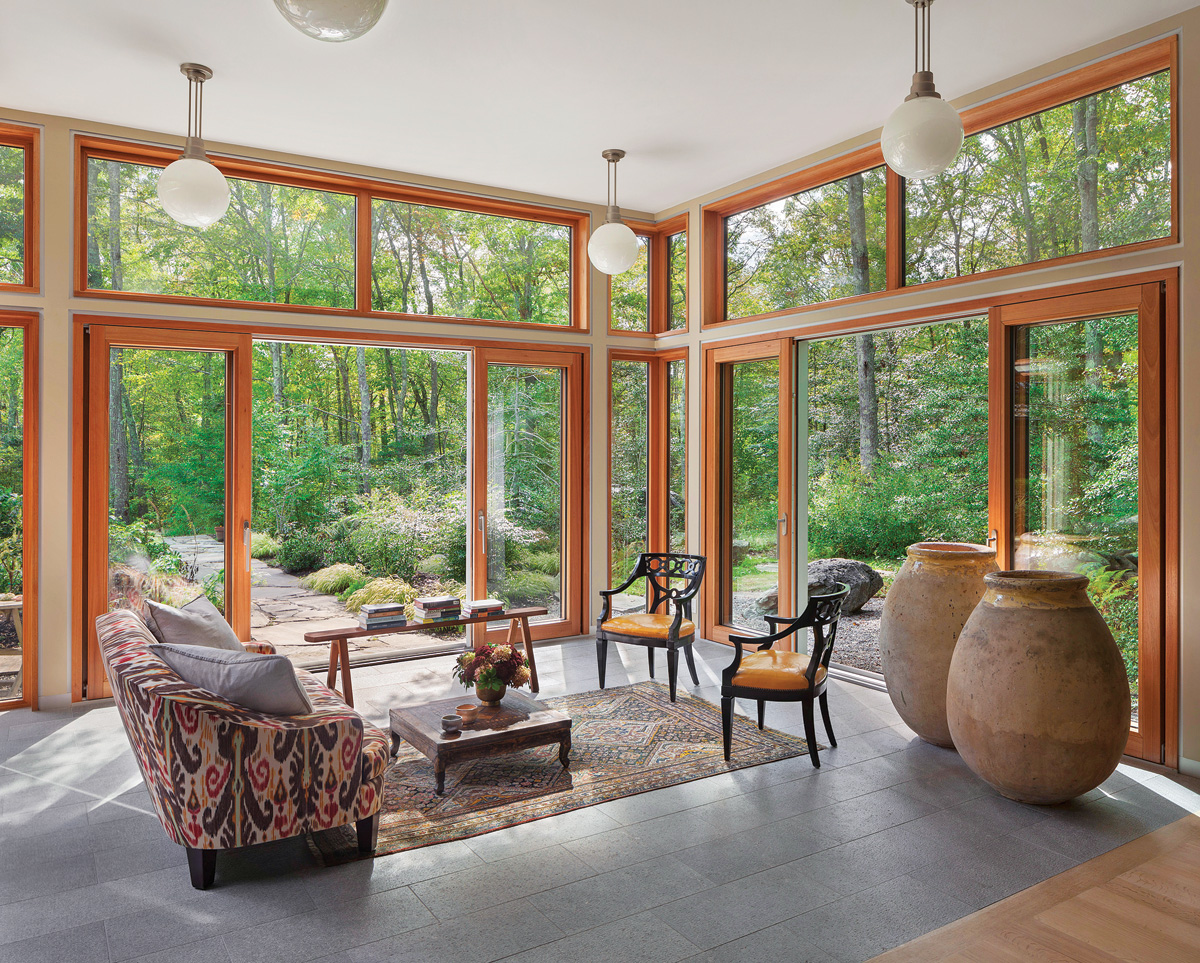 Goff’s design cleverly conceals the home’s mechanical systems in the lower ceilings above the kitchen and the guest room, while radiant heating is hidden under the floors. Photography by Anthony Crisafulli.

Open House
The structure itself was sound, so Goff used the barn’s bones as her skeleton. “We gutted the interior but used the column line that was already there, and then we added a sunroom and mudroom,” she says.

The kitchen side of the home flows freely into the open dining and living area, where dramatically high ceilings make the square footage feel large. Custom steel and fir trusses designed by Goff and manufactured in neighboring Massachusetts accentuate the room’s loftiness, as does a towering stucco fireplace that stretches along the length of the wall, from schist hearth to pitched ceiling.

The adjoining sunroom appears to “jump out into the garden,” notes Goff, enhancing the illusion of interminable space and blurring the distinction between interior and exterior. Transom and corner windows above the sliding doors in the sunroom flood the space with light, while thick red grandis windows create framed, immersive portraits of the bucolic scenery.

While the house is airy and its flow open, variations in vertical space and flooring — which transitions purposefully between white oak and tile — create distinct living areas. 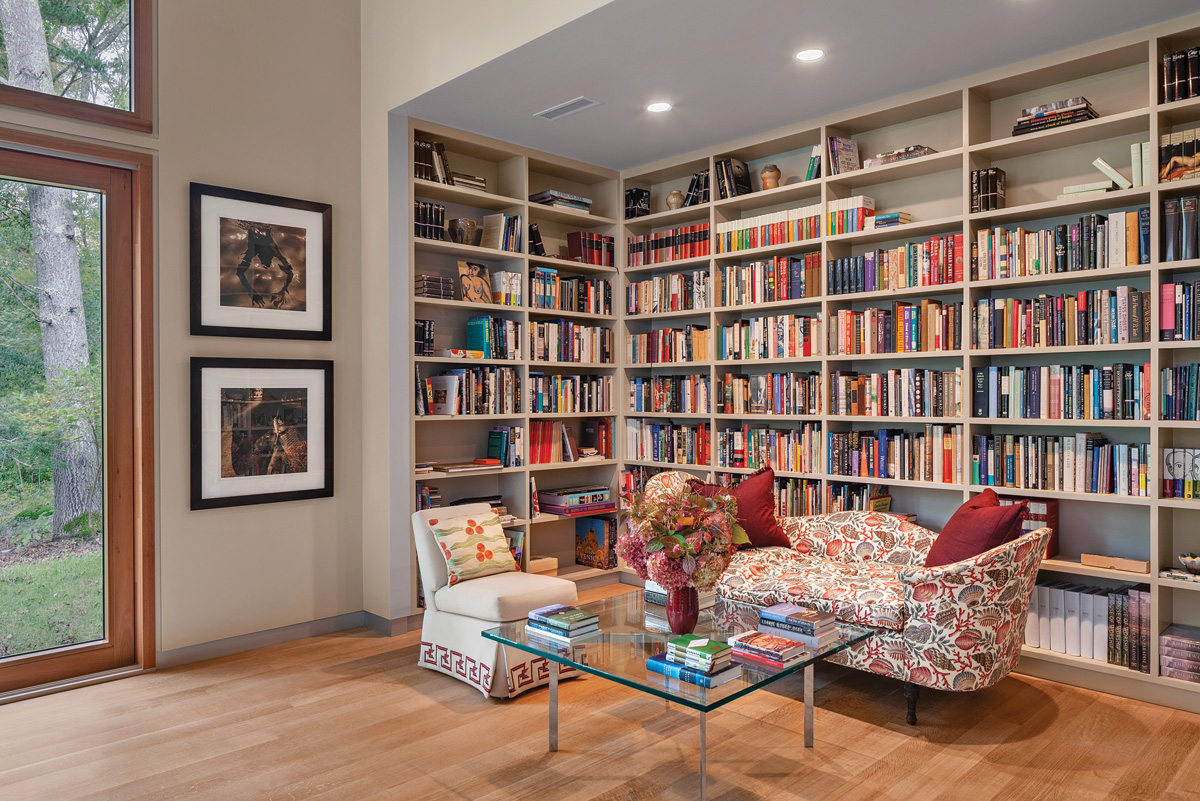 “All the furniture was the client’s,” says Goff. “She had a wonderful collection of eclectic furniture and creative sense.” Photography by Anthony Crisafulli.

Bespoke Sanctuary
As a whole, the owner very much wanted her new home to be a retreat — a serene, inspired place that capitalized on its secluded location and natural surroundings.

And what writer’s refuge would be complete without at least a small library? Although the library is part of the main living area, like the kitchen and sunroom, it achieves individuality through a clearly defined vertical space: A lowered ceiling around the built-in shelves creates an intimate niche-like feel, ideal for getting lost in the pages of a book as either writer or reader.

The master suite is, quite possibly, the ultimate reprieve. “In the way back of the structure there was an add-on and that became the master bedroom and master bath,” says Goff. “The room is very large; it is its own retreat.” The suite includes a sitting room with a large window that overlooks the property, a new wood-burning stove and a spa-like bathroom, complete with an indulgent soaking tub and walk-in shower. 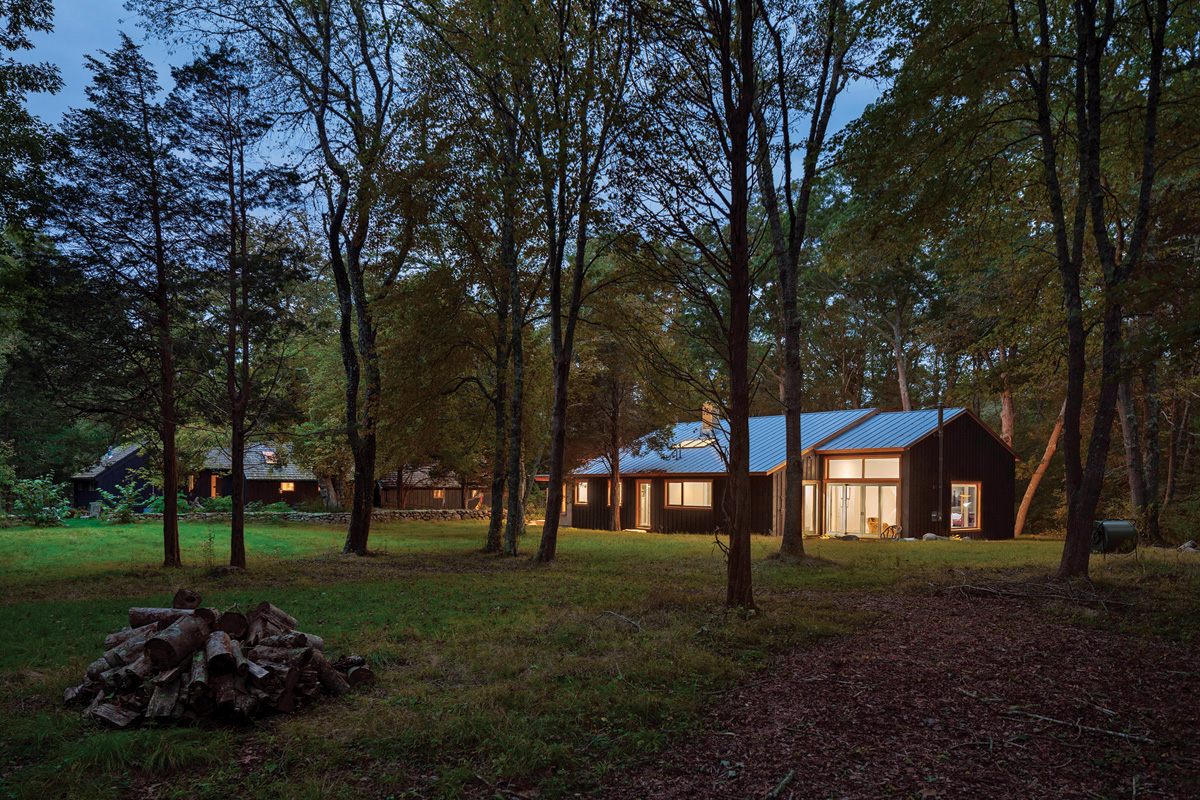 Natural Habitat
Details were equally as important outside. Although the home is not on the water, the board and batten siding chosen for the exterior nods to classic coastal New England style. In contrast, the standing seam metal roof has modern appeal. The stucco finish on the new mudroom was carried inside via the living room fireplace. 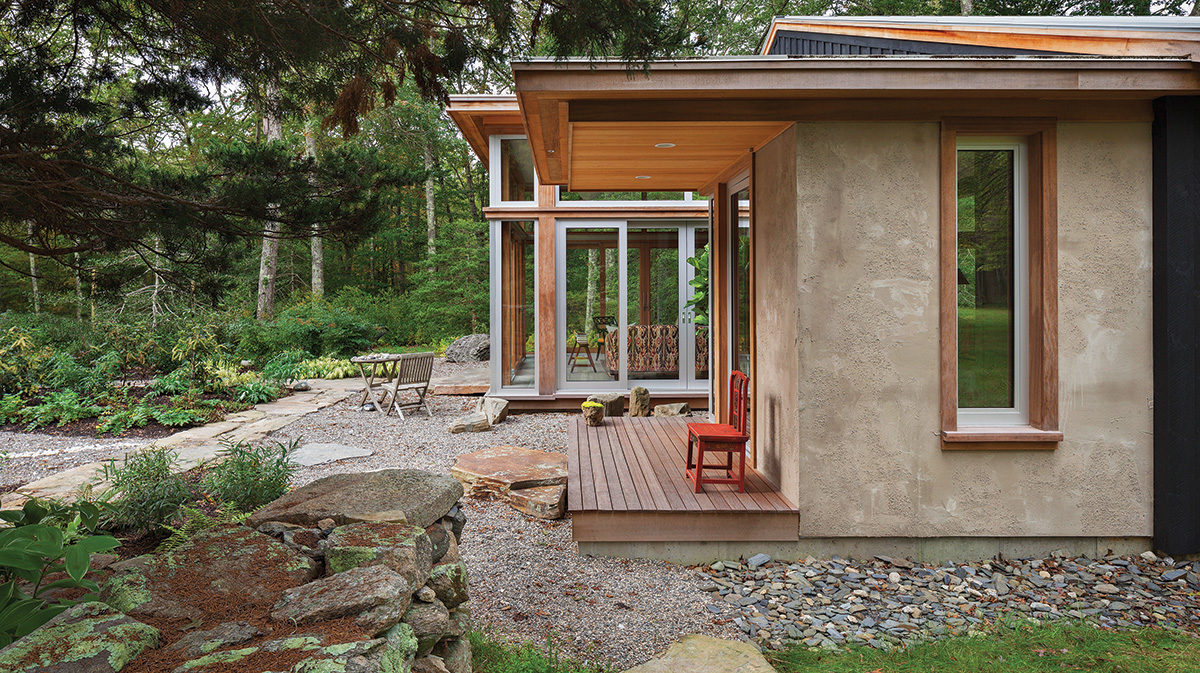 Having authored several gardening books, the homeowner did her own landscaping, which was augmented by hand-selected stones from mason Kevin Baker’s stone yard. Coincidentally, says Goff, the homeowner came across a familiar face while there. “She recognized a particularly gnarly stone that had come from her original house in Little Compton, so she bought it back and it came home to her new house.”

Baker also installed the natural stone paths that lead to the mudroom and sunroom doors. In addition to the landscaping immediately adjacent to the house, the homeowner has installed little “log fires” around the property and the creek that lines the driveway. Goff says the sculptures are reminiscent of a camp, apropos for the locale.