At This Self-Taught Designer’s Home, a Taste of Napa in the Ocean State 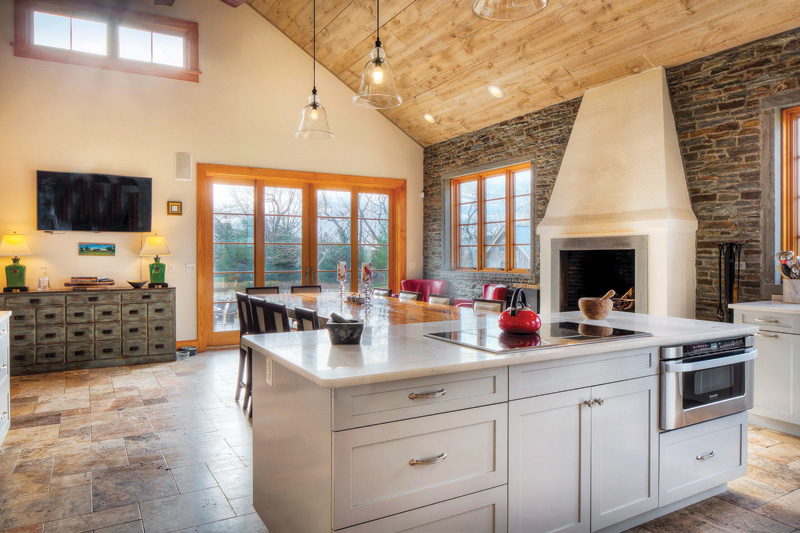 Practical Magic
When you design a house from scratch, you get to put fireplaces in the living room and in the kitchen. It’s that simple.

“I love to cook,” says Heidi Holland, who, ten years ago, transformed a vacant plot of land in Middletown into this custom home for herself, her husband and their two youngest children. “Before, I was always in the kitchen thinking, ‘You guys all get to be enjoying the fire. Why can’t I have that in the kitchen, and the company?’ Our kitchen really is our hang-out place.” 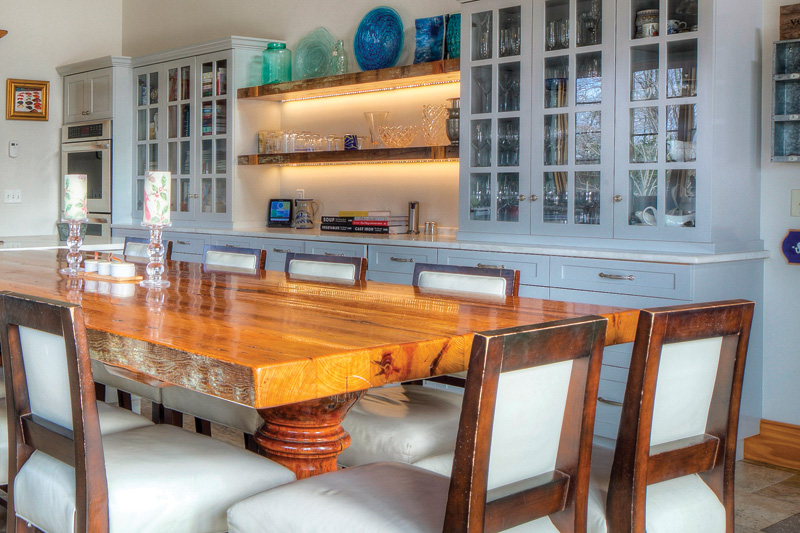 Craftsman Sam Clidence made the custom counter-height table, which sits flush with the white rhino marble cook island, from antique heart pine from a mill in Georgia. The table legs were crafted from dock wood. Photography by Michael Osean.

As both the owner and the general contractor of the Middletown property, Holland had supreme rule over such decisions. It’s the fourth project house she’s helmed in two decades; the first, in Jamestown, sprung from necessity.

“We got the property and figured out it was more cost-effective if I did all the general contracting myself,” she says. 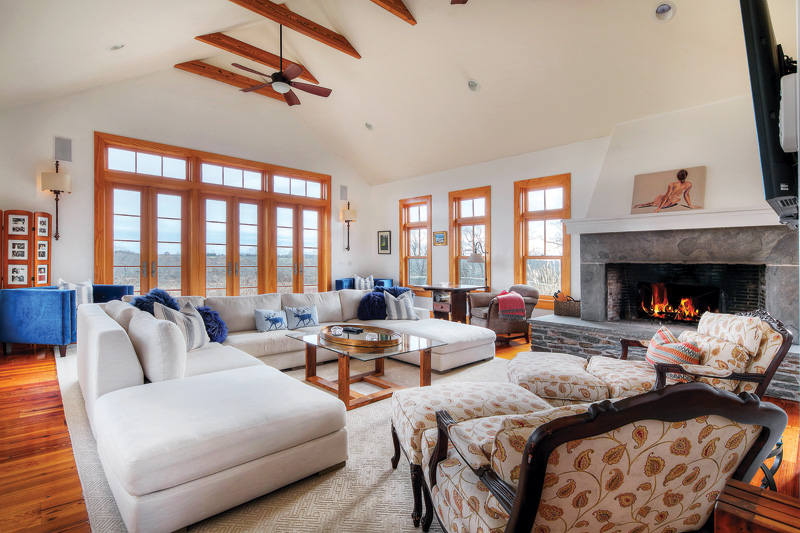 Holland hired an engineer to draw the designs on the Jamestown house, but took it upon herself to hand-sketch the three that followed. She bolstered her creative instincts with design courses at Rhode Island School of Design and New England Institute of Technology.

“My grandparents were architects, so maybe it’s in the bloodline,” she says. 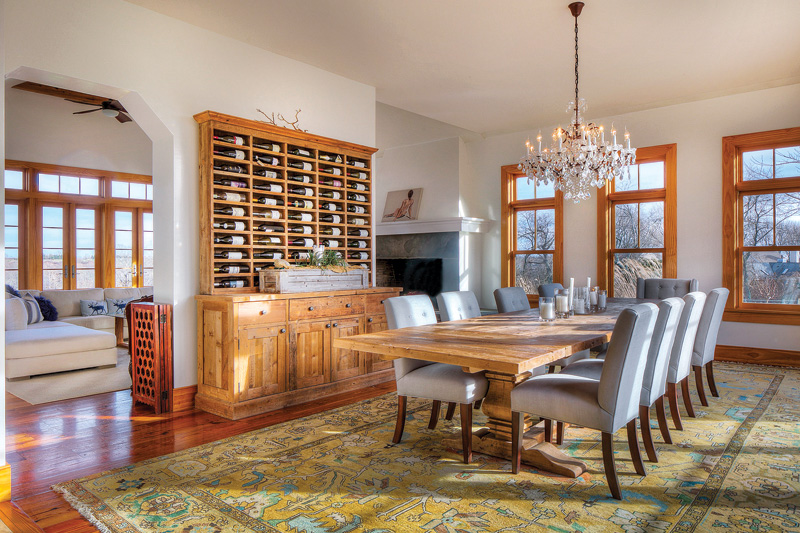 The living and dining rooms are divided by a narrow wall, which allows for unobstructed views of the raw bluestone fireplace in both rooms and hosts an out-of-the-way television. Photography by Michael Osean.

Give and Take
Friends always assume that, by designing her homes herself, Holland gets exactly what she wants. 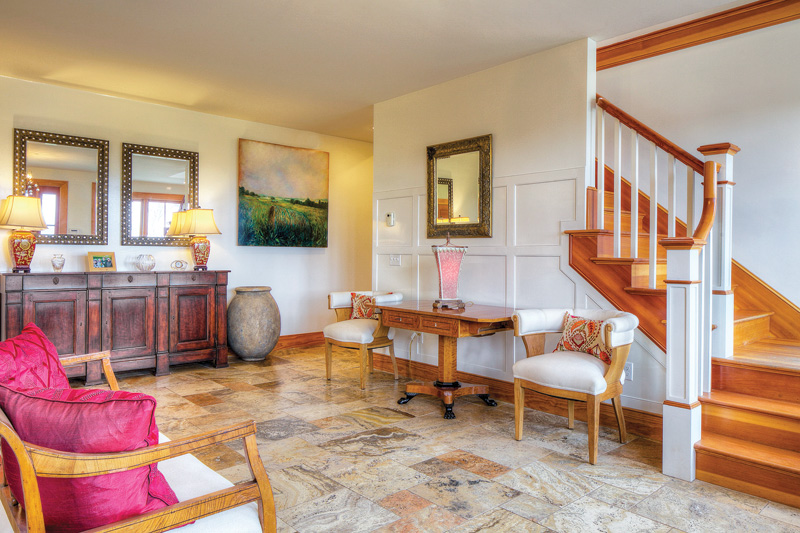 a staircase leads to the master suite, which spans the entire second story with an array of French casement windows. Photography by Michael Osean.

“In reality,” she says, “you start out with plan A, you get your quotes, and you might end up with plan G.”

An example: Holland hoped to build the Middletown property off the electrical grid. The former farmland didn’t have any utilities in place, so she designed the house to harness wind and sun and let solar panels do the rest. But plans changed and, in the end, a whole lot of engineering went into electrifying the property.

“We lived for almost a year off a generator,” she says. 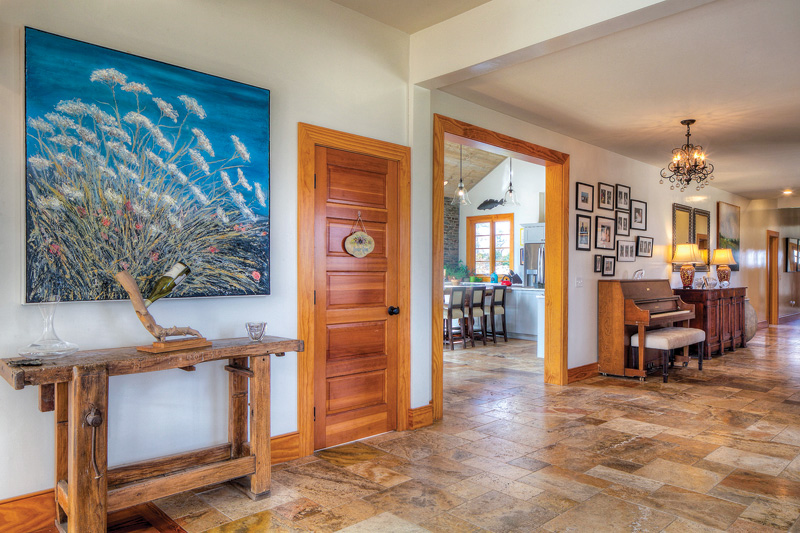 An old workbench, sourced from an antiques shop in Maine, is repurposed as a console table. The entry, main hall and kitchen all feature travertine tiling. Photography by Michael Osean.

Nevertheless, the home’s intentional siting, at one of the highest points in Middletown, captures breezes from nearby Second Beach. The ocean air crosses through transom windows and French doors, cooling the house on the hottest summer nights without any need for air conditioning.

Along with the two fireplaces, radiant floors help ward off the chill. They were an easy install under travertine tiles but presented a conundrum beneath antique heart pine flooring, which might warp when exposed to heat.

Other GCs might’ve pushed for porcelain or stone, but Holland knew what she wanted and made it work, thanks to some creative design and a trusty buffer of engineered planks. 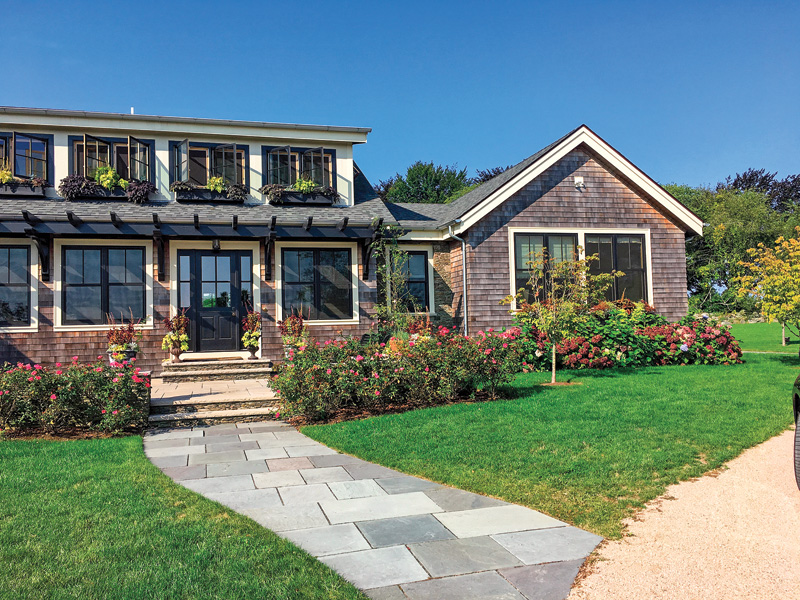 Moving On Up
Holland’s aesthetic is informed by the land, and the property in Middletown — with views of Sweet Berry Farm, Newport Vineyards and Hoogendoorn Nursery — reminded her of Napa Valley. She incorporated neutral raw wood and stone throughout and let Mother Nature do the rest.

“It’s really private, and we just fell in love with the view,” Holland says of the eleven-and-a-half-acre parcel, which was in Middletown’s first book of deeds. The land also offered adventure for her children and, in gathering wood for fires and observing wildlife, taught them a few life lessons, too. 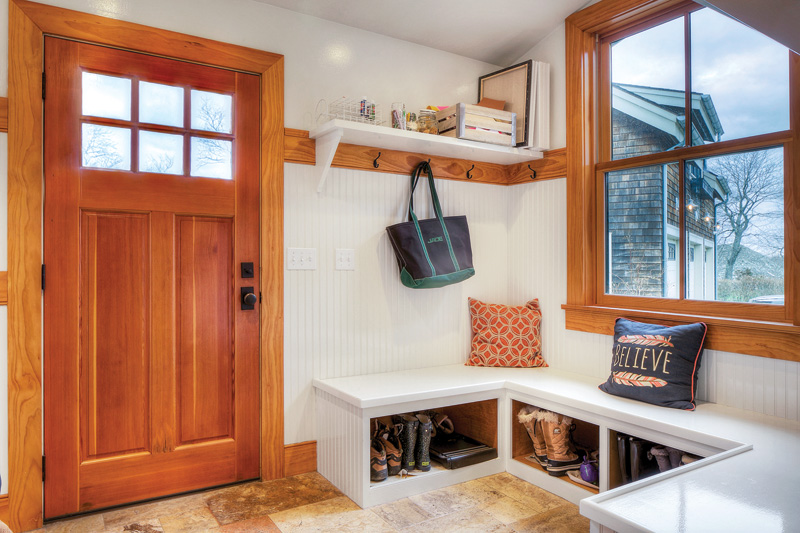 Holland designed the house to suit her family’s needs, from the host-worthy kitchen to the dedicated mudroom at the garage-side entrance, which leads to the kids’ wing. But, after a decade in Middletown, and with her youngest headed off to school in the fall, Holland and her husband are moving on. In midwinter, the property was listed with Gustave White Sotheby’s Michelle Kirby for $2.85 million.

“Two years after we finished this place, we bought a house in Maine,” she says, adding that it was always their dream to live up north. But Holland is hopeful her design will speak to someone who also appreciates the well-framed views, the fireplaces, the big kitchen table — namely, the many-splendored things that inspire togetherness and make a house a home.