Rhode Island's quahoggers are a resilient bunch, even in the face of a pandemic.

Just as the sun peeks above the east bay, Jody King completes his 500-foot commute to work from his home in the Oakland Beach section of Warwick to his twenty-five-foot boat docked at the marina at the end of his street. As soon as he starts the engine, he takes off across the water. Today his destination is a few hundred yards off Barrington Beach, where he will spend four hours digging for quahogs.

It’s a job King stumbled into in his thirties, and it’s a job he lives for. A year-round commercial shellfisherman for twenty-five years, he repeatedly claims he wishes there were eight days in each week so he had another day to go quahogging.

Drifting in fifteen feet of water, King assembles his gear: two telescopic poles called stales clamped together with a handle at one end and a bullrake at the other. The rake, a square steel basket nearly two feet wide with pointed tines that dig into the sediment, is manipulated with a series of tugs on the handle as he walks backward across his boat. 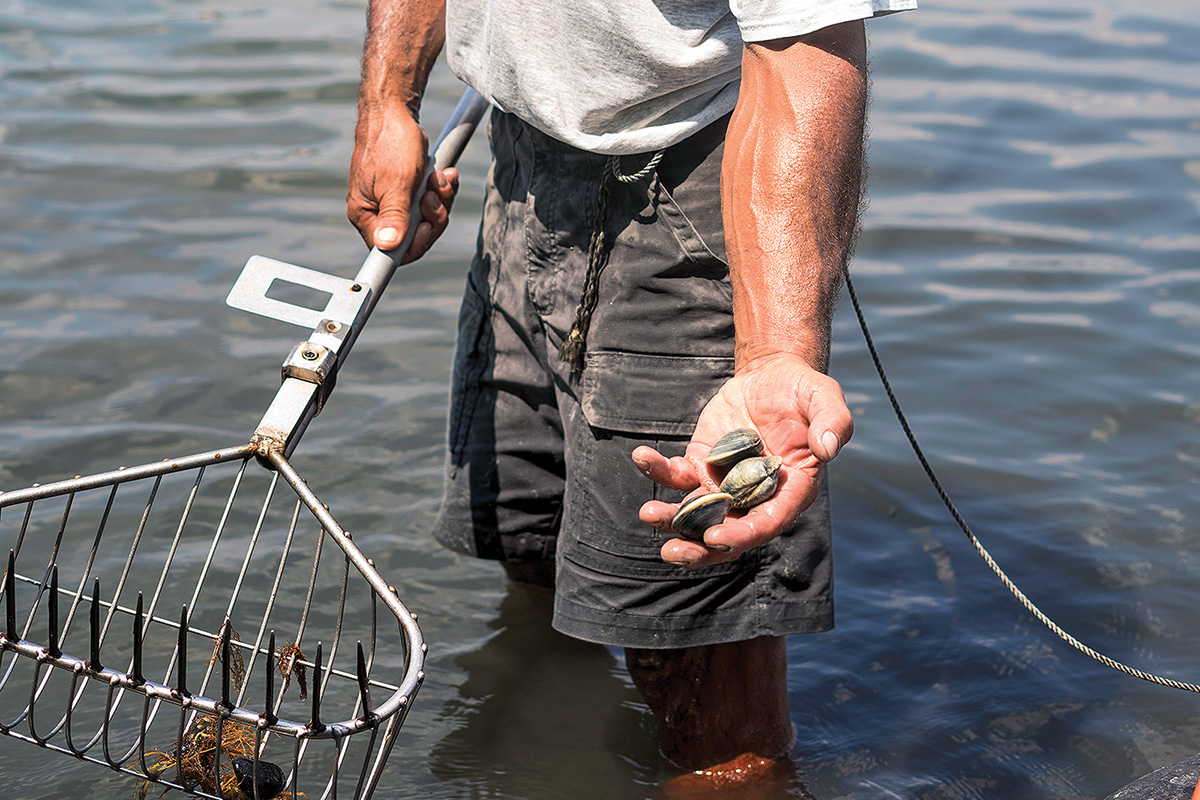 “They call this bullraking for a reason,” King says. “It’s the hardest job you’ll ever love. I’m fifty-nine and in as good a shape as I was when I was twenty-five. I’m strong like an ox. Just don’t ask me to run more than 100 yards.”

Soon after he slides the rake into the water, he knows it’s not going to be a lucrative day. King aims to harvest 600 clams each day in the winter — 1,000 in the summer, when the quahogs aren’t as deep in the sediment — but to do so requires a little wind to ensure that the boat drifts just enough to keep his rake moving across the bottom. He figured out that the optimal winds will push his boat at .35 to .39 miles per hour. But on this day, there is no wind whatsoever.

“The quahogs aren’t in one spot, so in order to catch them you have to drift through miles of bottom,” says King, who teaches a class for the general public called Come Clam With Me. “Sometimes it’s the wind that pushes me, sometimes it’s the tide, and sometimes I have to push the boat myself. Today is one of those days.”

Despite the lack of wind, King seems to dance with his bullrake, creating a distinct rhythm with each tug on the handle as he does a two-step across the deck. “The sound is mesmerizing,” he says. “Every time the rake shakes, I hear a quahog go in.”

King is one of about 450 licensed commercial quahoggers in Rhode Island, though only about 100 of them work full-time and year-round. It’s an iconic industry in the state, but it’s one that is facing considerable challenges as its workforce ages, profits are inconsistent and demand for quahogs ebbs.

And yet those like King who have made quahogging their lifestyle can’t imagine doing anything else. “Every day is a great day because I get to do something I love,” King says. “The only time I don’t love my job is when it doesn’t give back to me, when I don’t make enough money. But overall, it’s given back to me 100-fold.”

After twenty minutes of tugging and dancing, he’s ready to haul in his catch. So he takes a rope tied to his rake and wraps it around an electric hauler. When he turns on the machine, it retrieves the rake from the bottom. King then shakes out the mud and the clams too small to keep, and he dumps the rest in a sorter. As he separates and counts the quahogs by size — from smallest to largest they’re called littlenecks, topnecks and hogs — he calculates how much money he made. Not much.

But he’s not discouraged. Holding up a littleneck, he says, “I paid for my house with these little guys, and multiple trucks and multiple motors on my boat. I don’t know what I’d do if I didn’t have clams to dig.”

Quahogs have been harvested from Narragansett Bay for millennia. Archaeological sites at Point Judith Pond and Potowomut documented large piles of empty quahog shells at Native American camp sites that date back hundreds of years. According to Michael Rice, a University of Rhode Island shellfish scientist, when Europeans arrived in the

The commercial quahog industry in Rhode Island didn’t get its start until the end of World War II, when soldiers returning from war picked up large tongs to harvest clams. They later adopted the bullrake when it was invented in the 1950s. Many oystermen also switched to quahogging at about the same time after rebelling against the families that controlled the state’s oyster industry. The quahog industry peaked in the 1980s after the Clean Water Act forced improvements in water quality and areas that had been closed to shellfishing due to pollution concerns were opened for the first time.

“The general state of the economy has a big effect on the quahog industry and how many shellfishermen there are,” says Rice. “If there’s a good real estate boom, some of the workforce will shift into the construction trade, and as things get worse, they shift back into quahogging.”

It’s not as easy as it used to be to break into the industry, however. The system for allocating quahog licenses was restructured in 2004. Before then, hundreds of shellfish licenses were issued annually to people who seldom dug many clams, making it difficult for the state to regulate the fishery. To reduce those numbers, just one new license was issued for every three fishermen who exited the fishery. Now that license numbers are down to a more manageable number, a new license is issued for every one not renewed.

But just thirty to forty new licenses are typically available each year out of a pool of more than 100 Rhode Islanders who want a license. Permits are awarded through a weighted lottery system, and those with fishing experience have the best chance of winning. In addition, thirty-seven student licenses were issued in 2019 to encourage younger people to enter the fishery, and 372 senior licenses were issued to those older than sixty-five. It’s also possible to acquire a commercial license by buying an existing quahogger’s business, but that can be a costly undertaking.

The greatest concern facing the quahog industry is its aging workforce. The average age of the state’s quahoggers is about fifty-five and getting older, and the physical demands of the job mean that many workers are likely to retire soon. Yet it is very difficult to attract younger people to the fishery. Most fishermen claim the younger generation doesn’t want to work as hard as necessary to succeed as a quahogger.

“They’ve got a lack of drive. A strong work ethic hasn’t been passed on to them,” says Jeff Grant, one of the younger quahoggers in the industry at age thirty-five. “They seem to have the attitude of ‘why would I want to work that hard when I could do something easier and get paid just as much?’ ” 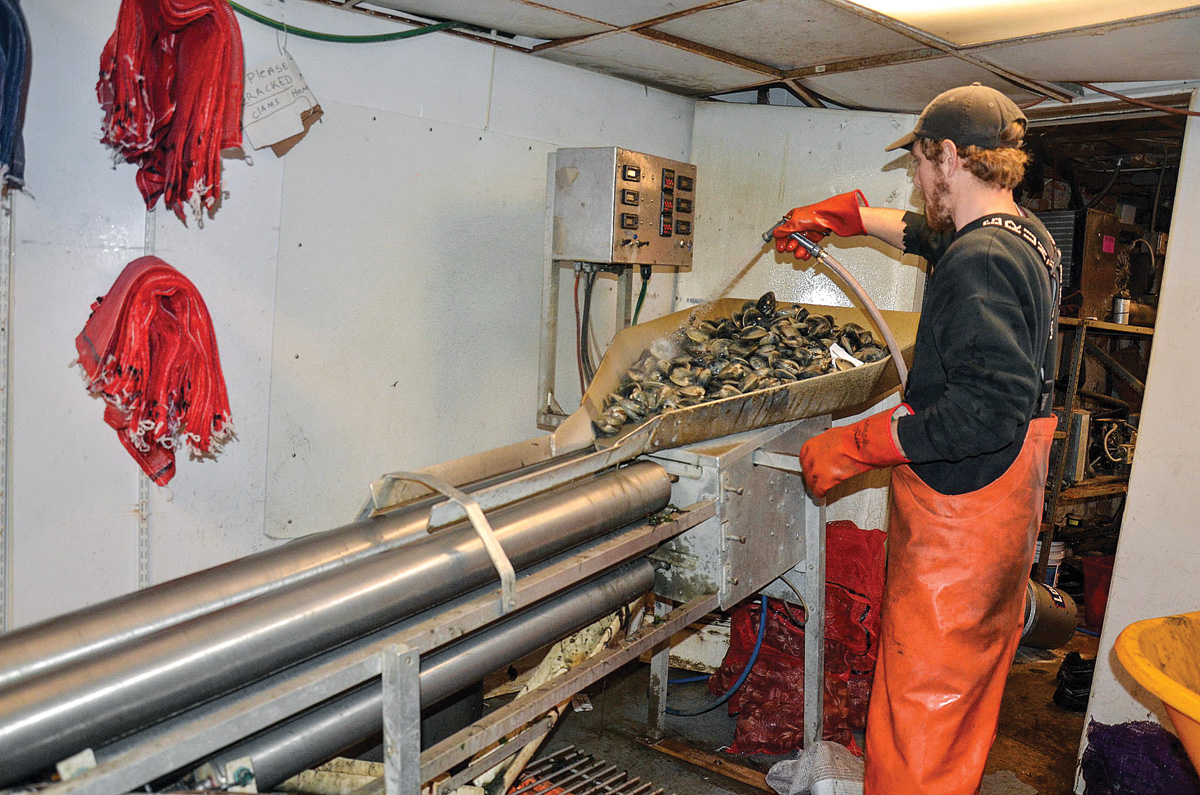 To recruit younger workers, the industry was awarded a grant to launch a paid internship program enabling those interested in becoming a quahogger to work alongside a licensed shellfisherman to learn the ropes and gain experience. Those who complete the internship have an advantage in being awarded a commercial license through the lottery system. Of the twenty internships available in the last two years, nineteen have been filled, and eight of those who completed the program have been awarded commercial licenses.

“Ours is a young man’s game, so we’re working to bring young people in,” says Mike McGiveney, the long-time president of the Rhode Island Shellfisherman’s Association. “It’s a challenge to do, though, because there are a lot of other jobs out there.”

For his part, Grant says there are plenty of positive reasons to be a quahogger, including the opportunity to be on the water every day, to be your own boss, to make your own schedule, and to be home by noon most days to spend time with your family. “You’re never going to get rich doing it, you’re not going to retire early, but it definitely has its advantages,” he says.

Grant is concerned, however, about the aging workforce and how their retirement will affect the rest of the industry. “I think we’re going to lose a big chunk of the full-time workforce,” he says. “And I’m worried that the dealers we sell to won’t have enough product coming in the door and won’t be able to keep their doors open. If a dealer goes from having twenty to thirty guys selling to him down to just ten, that might be enough to force him to close. And when dealers close, that’s bad for the industry.”

It may already be happening. One dealer closed in 2019, and another started a price war by raising prices paid to quahoggers to attract more quahoggers to sell to that dealer.