April showers bring May flowers! Gather a bundle to bring home at these bountiful pick-your-own farms around the state. 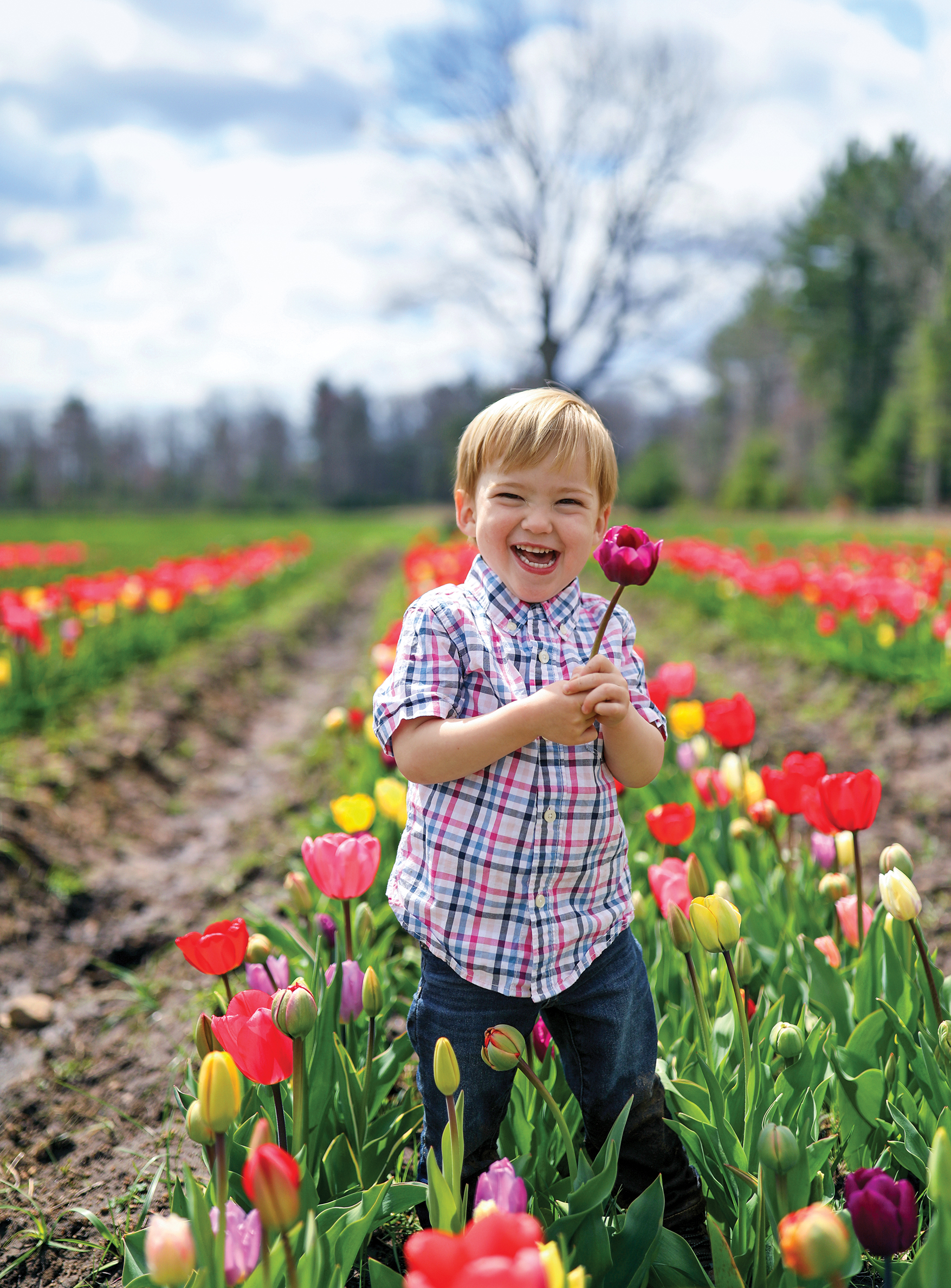 More than just an Instagram-worthy photo opportunity, these local flower farms have dedicated farmers who cultivate a beautiful selection of botanicals for the spring and summer. Even if you’re not picking petals, take in the beauty of the blossoms and the hard work the farms have put on display.

After purchasing the property in 1890, the Dame family first made its farm profits off of dairy cows and apple orchards. The family lost ownership after the state gained control of the property in 1969. For many years following, the farm sat idle. After subleasing the land from the Rhode Island Historical Farm Association in the early ’70s, the family resumed farming and a wholesale market began its operations. In 2012, leasing became an issue and the Dames moved their business across the street. Seven generations later, Dame Farm and Orchards operates as a farm stand and flower farm. In previous seasons, the farm has grown summer varieties of zinnias and sunflowers.

Know before you go: Customers must pay for all flowers they pick. Bring your own clippers or heavy-duty scissors. Backpacks, large shopping bags and other large containers are not permitted.

Opening mid-April to the public. Call before arriving for the most up-to-date information, including hours and admission prices. 91B Brown Ave., Johnston, 949-3657, damefarmandorchards.com

Thanh Luu is a one-woman show who moved to the state nearly a decade ago and began growing lettuce and a single bed of zinnias and marigolds. She was inspired by her aunt’s joyous reaction to receiving flowers. Over the years, her dream has bloomed into cultivating an eleven-acre field of varietals. In addition to her flower farm, she provides florals to a handful of weddings each year and sells to local farmers markets and distributors. In the spring, she stocks ranunculus, anemones, tulips, narcissus, snapdragons, peonies, bells of Ireland and more. From July to

September, her farm is open for pick-your-own flowers. In late summer, her whole field is in bloom. Her fall season features dahlias, sunflowers, eucalyptus, hydrangeas, amaranthus and more.

Know before you go: There are limited parking spaces. Bring your own clippers and buckets; water is provided for your flowers. 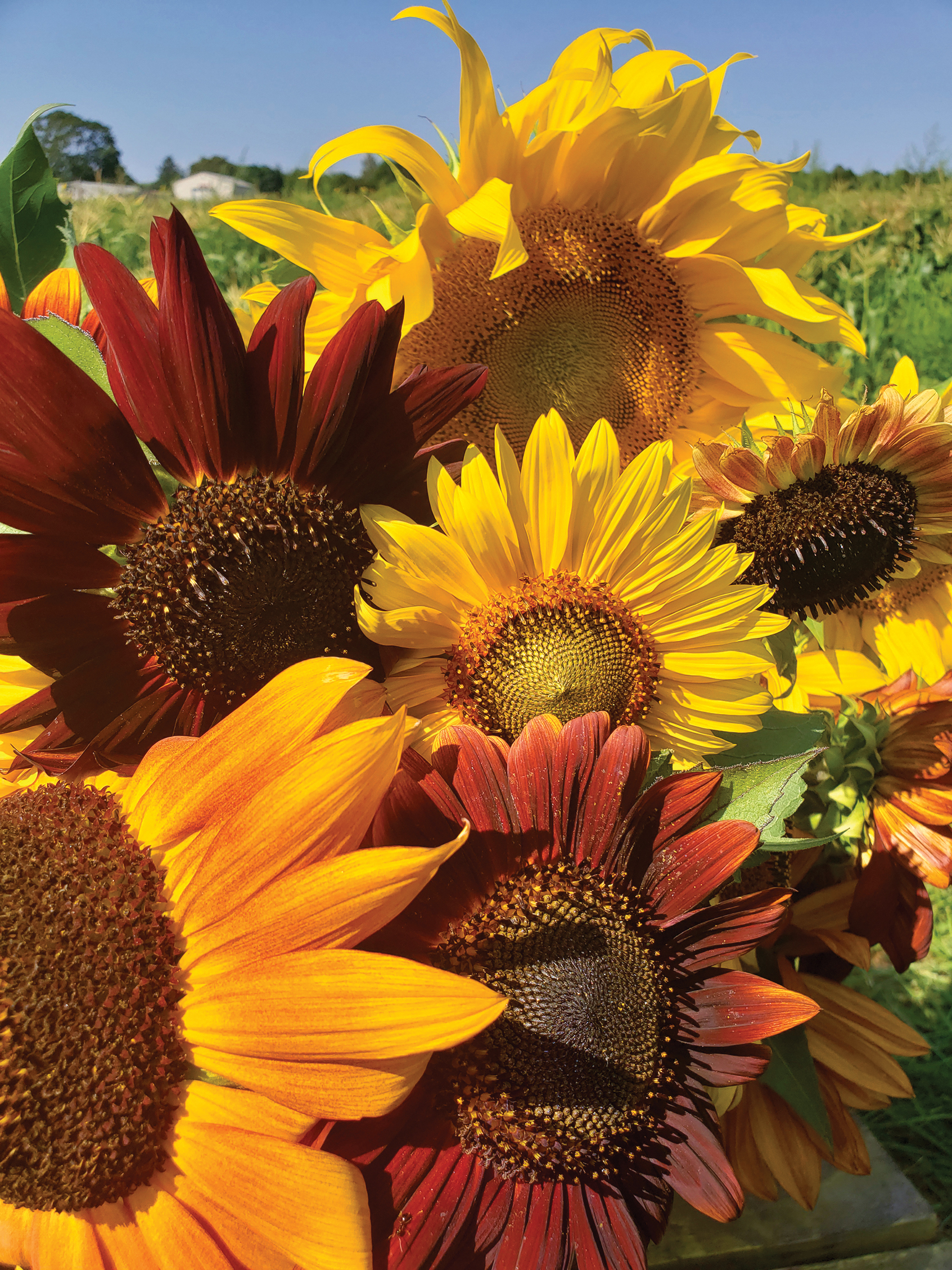 When not offering PYO florals, Manfredi Farms offers farm-fresh produce and a petting zoo full of cows, goats, donkeys and chickens. The farm specializes in a long season of sunflowers. They’re not the tall, black-centered varieties, says manager Melanie Manfredi, but rather the soft, fluffy “Teddy Bear” flowers. Sizes vary from two-inch flowers to eight- and ten-inch blooms in a variety of colors.

Know before you go: Everybody who enters the field, even those not picking flowers, must pay admission and receive a wristband. With purchase of admission, guests are allowed in the play area for kids with a huge sandpile, tetherball, picnic and play area. Guests can pick as many flowers as you can fit in your arms, but no buckets or baskets are allowed. Bring your own clippers.

Wicked Tulips in Exeter began its journey in 2009 when
Keriann met Jeroen Koeman, who comes from a Dutch family of tulip growers. Upon marrying, they started EcoTulips selling organic bulbs. In September 2015, they brought their tulip-growing dream from central Virginia to Rhode Island. Each year, the couple plants 800,000 tulips with a tractor and hosts the largest U-pick tulip event in New England. They have prioritized the purchase and use of certified organic bulbs in an effort to be more eco-friendly. Their second farm, in Preston, Connecticut, is only twenty-five miles away.

Know before you go: Bring your own water for your tulips post-picking. Sign up for the newsletter to be notified of ticket sales and more. Adult admission includes ten tulips. Additional tulips are $1 per stem. 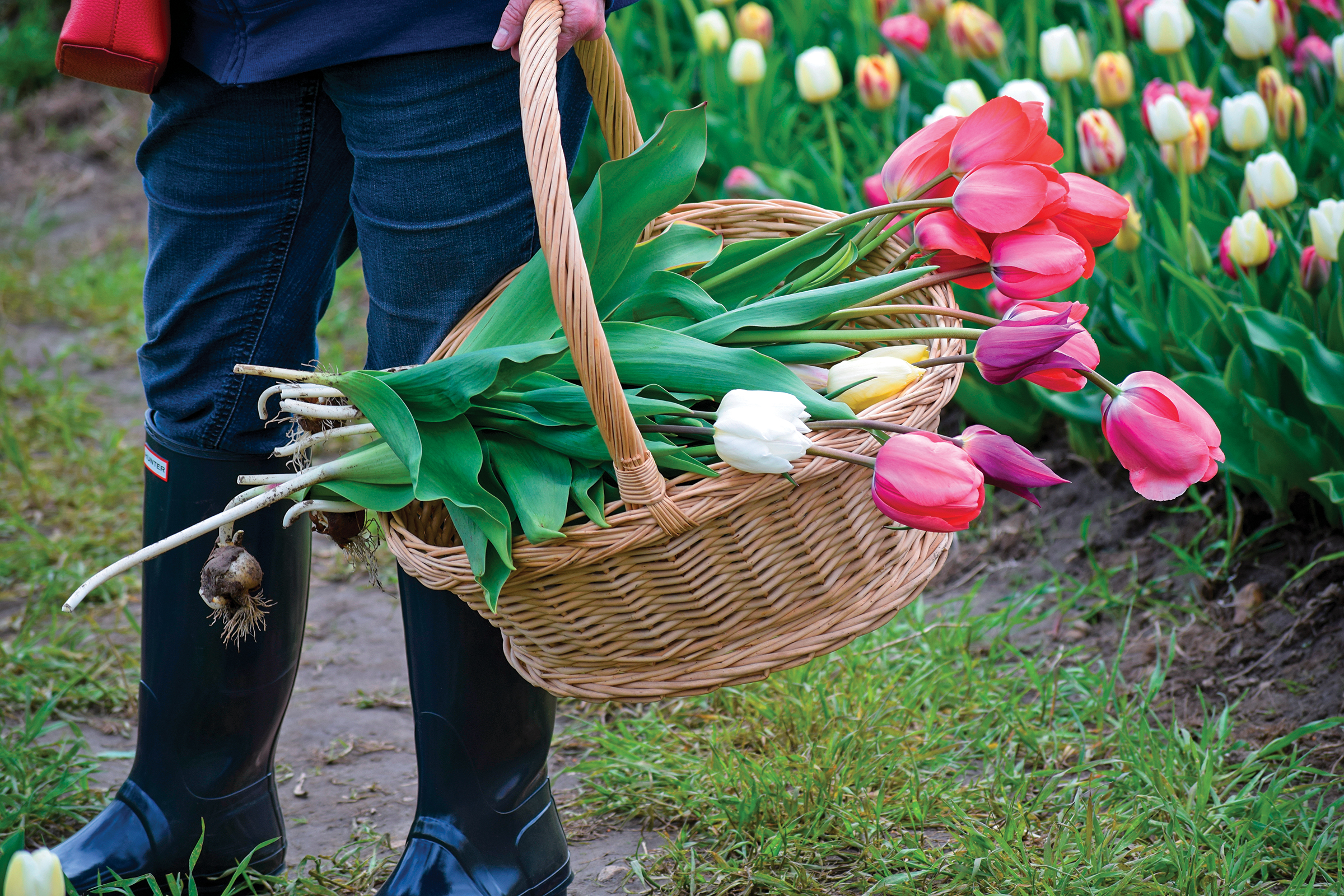 Electric Moon focuses on top-quality peonies. In spring, the farm is open for cut flowers while the fall is reserved for rootstock sales. The farm is open to the public on select days in the first two weeks of June to
observe the growing habits, flower colors and fragrance of individual peony varieties while the field is in peak bloom.

Know before you go: While this isn’t a PYO, guests may view and select which flowers they want cut. Cash or check payment only.

Around the 1900s, David Solomen Peck bought land in Seekonk and passed down the property to his children. Over the next few generations, the farm expanded to thirty acres with a team of field laborers. After distributing to grocery stores, the farm turned its attention to a roadside cart beginning with melon sales. The cart became a stand and expanded its selection to other vegetables and fruits. Today, the farm has grown to supply a farm stand and twenty-three greenhouses. The PYO flower garden has a long season until a hard frost, and at that point the farm turns over into a PYO pumpkin patch complete with a hayride that leads to a corn maze.

Know before you go: Open early July. No admission fee; flowers paid by the pound. 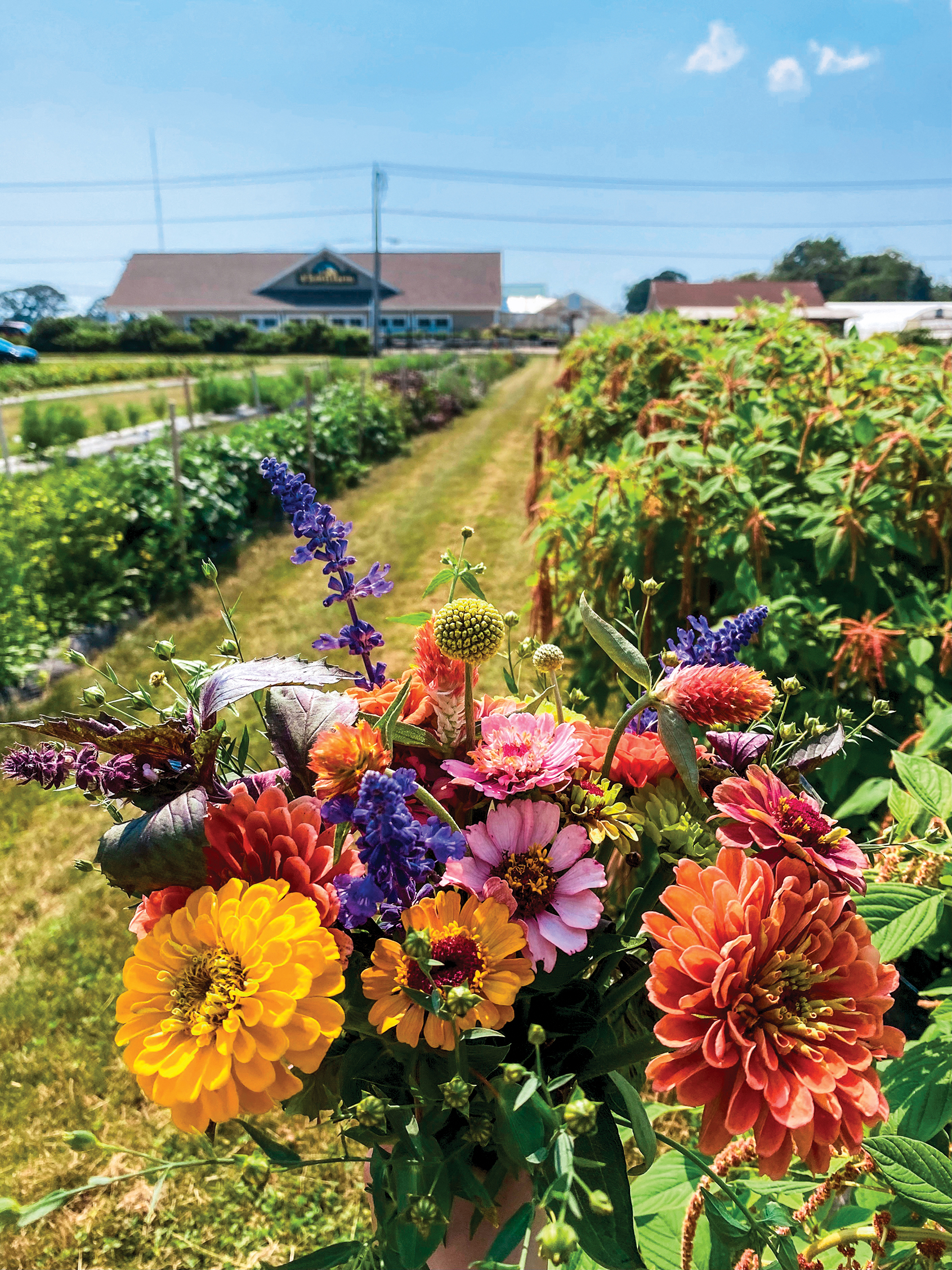 How to Make Them Last

“The great thing about utilizing local flower farms is that sourcing directly from your farmer allows you the longest possible vase life from the beginning,” says Olson, who takes custom orders through Instagram at @moonstoneflower.co. “Grocery stores typically carry flowers that have been cut for a week and flown in so that by the time they reach your hands, you might be lucky to have a few good days with them.”

You’ve cut them, now what? 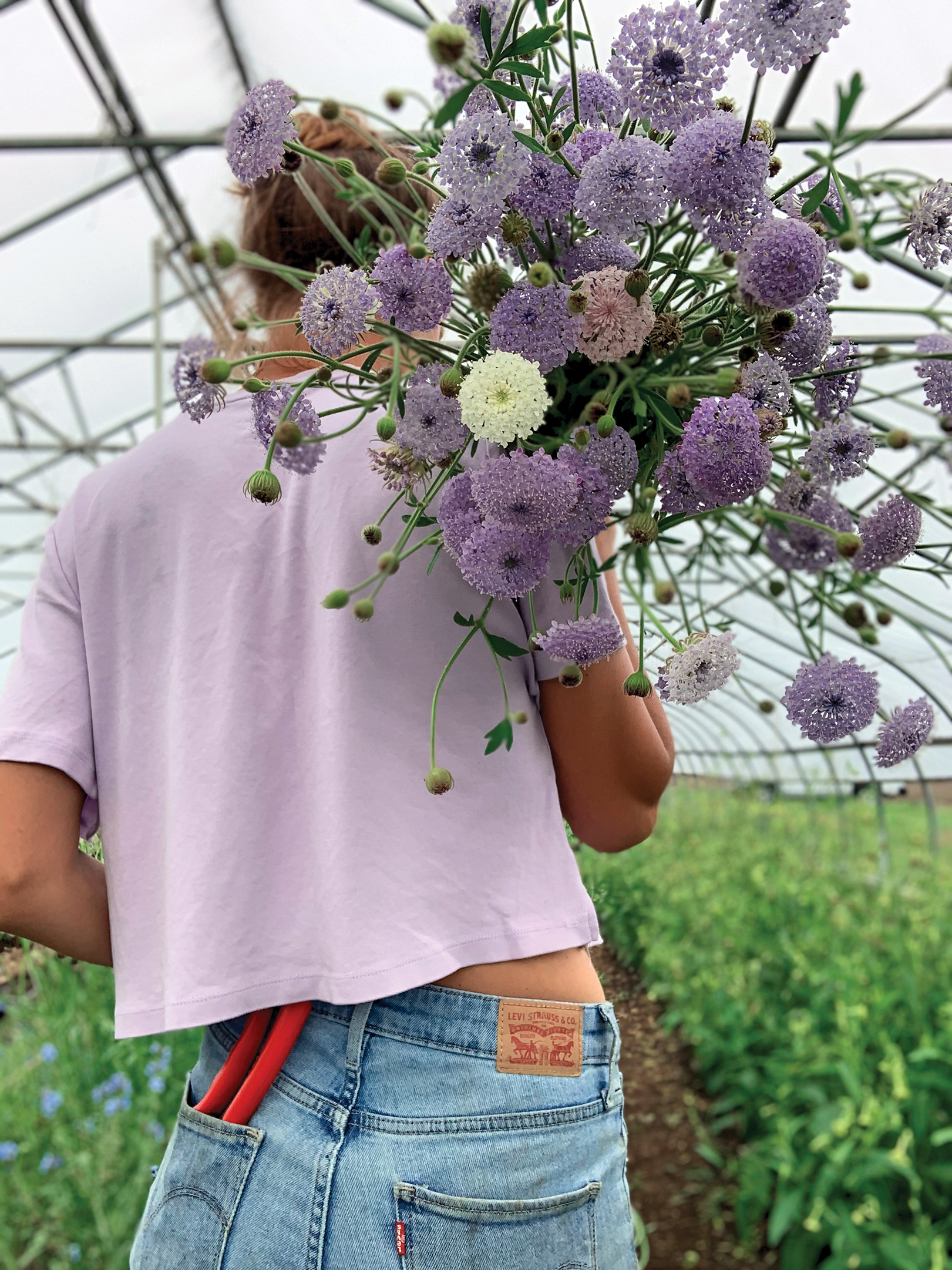 Tags: Flower Farm, pick your own