Our state’s got no shortage of red sauce restaurants. But can the newest, La Masseria, bank on its New York roots to make a mark in East Greenwich?

Rocco’s a good Italian name!” according to the gregarious four-top huddled in the corner, patting (smacking) their server roughly on the arm. Apparently a name will only take you so far. Shortly there-after, the table’s patriarch begins  tossing out Italian idioms for instantaneous translation, which, in turn, leads Rocco — perhaps tired of the whole linguistic affair — to rib another diner on his stumbling pronunciation of pappardelle. It seems everyone at La Masseria has an indomitable way of doing things, including hosts who consider carrying your drink from bar to table an essential element of hospitality. After one polite denial (“no thanks, I’ve got it”), affability turned to insistence, and it was better to acquiesce to the strong arm of the house.

Design is just as determined. The restaurant is broken into two floors and several alcoves, creating pockets of intimacy rather than the spirit of communal dining. But the rustic roadmap that designer Libby Langdon created for Masseria’s New York location plays just as well in East Greenwich, despite the colonial façade. Exterior shingles give way to a bucolic barn setting, complete with bricked archways, assorted pitchfork tines and taxidermal roosters. The result, replete with wide wooden beams, a multitude of decorative wine bottles and eyefuls of Italian majolica, works in an insular but engaging manner.

Executive Chef Pino Coladonato’s original Pugliese menu remains intact, sated with the stews, pasta and legumes that characterize the cuisine of Italy’s most southeastern region. Even the peasant breads and parmesan pepper breadsticks are accompanied by olive oil packed with soft green lentils. And though one might expect the most indigenous dishes to be the most affordable, you can almost count on an elevated price tag identifying Masseria’s best dishes.

Some people may think that twenty-six dollars for a ball of cheese is an outrage; I’ve certainly eaten with more than one of them. That, however, not only overlooks the scarcity of handmade cheese but the effort it takes to produce it. Masseria’s burrata — a buffalo mozzarella stuffed with its own soft curds and cream — is served with an innocuous medley of peeled asparagus and tomatoes, but it’s the cheese itself, slightly salty with just a hint of acid, that garners praise. Its center was a little firmer than expected, but the flavor will capture the attention of any dairy aficionado. Equally simple and just as good is the nightly seafood salad that combines shrimp, squid, clams and a bright lemon vinaigrette in a radicchio leaf bowl. It’s summer sentiment regardless of weather and one that revels in texture without any need for superfluous ingredients. Slightly more complex is a plate of smoky grilled scallops that suffers only from a handful of over-seasoned artichoke hearts.

With few exceptions — veal chops and a prime rib eye — entrees are affordable, even reasonable given the handful of dishes that use freshly made pasta. The dough itself is made by capable hands, dense when it needs to be (as with fettuccine) and tender when warranted (knuckle-sized gnocchi). The difficulty is that strong sauces tend to overwhelm a deft dough. (“Pa-par-DAY-lay,” says Rocco to the man who has now taken to pointing at the menu rather than speaking. “If it’s pa-par-DEL-e, I have no idea what you’re saying.”) The apparent tongue-twister’s covered in a short-rib ragu and it holds up pretty well though it clumps unnecessarily into a doughy ball that needs to be dissected. Tagliolini all astice is served with a seafood stock tomato sauce and lobster meat, flanked by the head and tail of a disinterred crustacean. Certainly not prohibitive at $21.50, though the lobster meat would be more eye-catching in larger pieces. Gnocchi disappoints, however, not in texture — the dough’s quite light — but because of a taleggio cheese sauce so thick and unforgiving that one companion compared it to Stouffer’s, adding quickly and leniently that such a description was “not necessarily a bad thing.” (Yes, it is.)

Meats, too, shine in their most unadorned form; grilled comes off well almost every time. Those drowned into oblivion often taste fine but suffer from a monotonous consistency that makes the dish bland. Coniglio alla caprese (rabbit with fresh herbs and wine) does include tomatoes (hence the influence of Capri), but rather than a clean, vivid plate, it’s a slightly nebulous braise that highlights neither the rabbit, nor the herbs. Nearing $30 and worth every penny is quanto il mare ha dato (“what the sea gave”), which differs nightly but regularly features branzino, roasted whole and boned on request. It’s perfectly unadorned, with the exception of a lemon and herb-scented olive oil, and proof that good Italian has a lot to do with restraint. (We can argue about how Italian a side of duchess-style potatoes is, but the bake of zucchini parmesan leaves little doubt.) 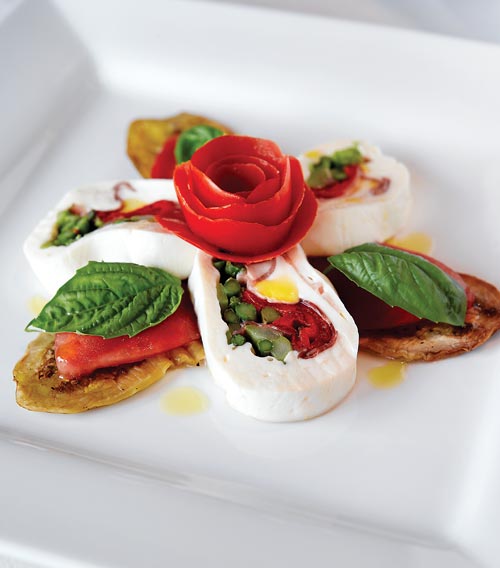 Masseria’s New York progenitor sits in the congested theater district, which may account for some of the menu choices that rely on quick sears or long roasts that can be done earlier in the day. This serves people running off to a show or arriving late, post-play, pretty well. In residential East Greenwich, patrons can take a little more time with dinner and don’t necessarily need a dish delivered or taken away in a mad dash. Is the restaurant willing to bend urban mandates to a suburban clientele? We’ll see.

Of course, all precedents go out the window when it comes to dessert. Order Italian and order often given that the French-inspired creme brulee is the only misstep. (Uncomfortably eggy, unforgivably curdled.) Traditional tiramisu is all cheese, all sugar and all good with just the requisite hint of both coffee and alcohol. Add a slice of smooth ricotta cheesecake and you’ve done as much damage as possible without a larding tool. After all, Masseria may look like a barn, it may operate with a bustle, it may even enjoy putting you in your place on occasion. But, ultimately, it’s homestyle — and that comes with a lot of personality.