An Intimate Look Inside a Contemporary Waterfront Home in Jamestown

A contemporary home on the waterfront honors family history while casting an eye toward the future. 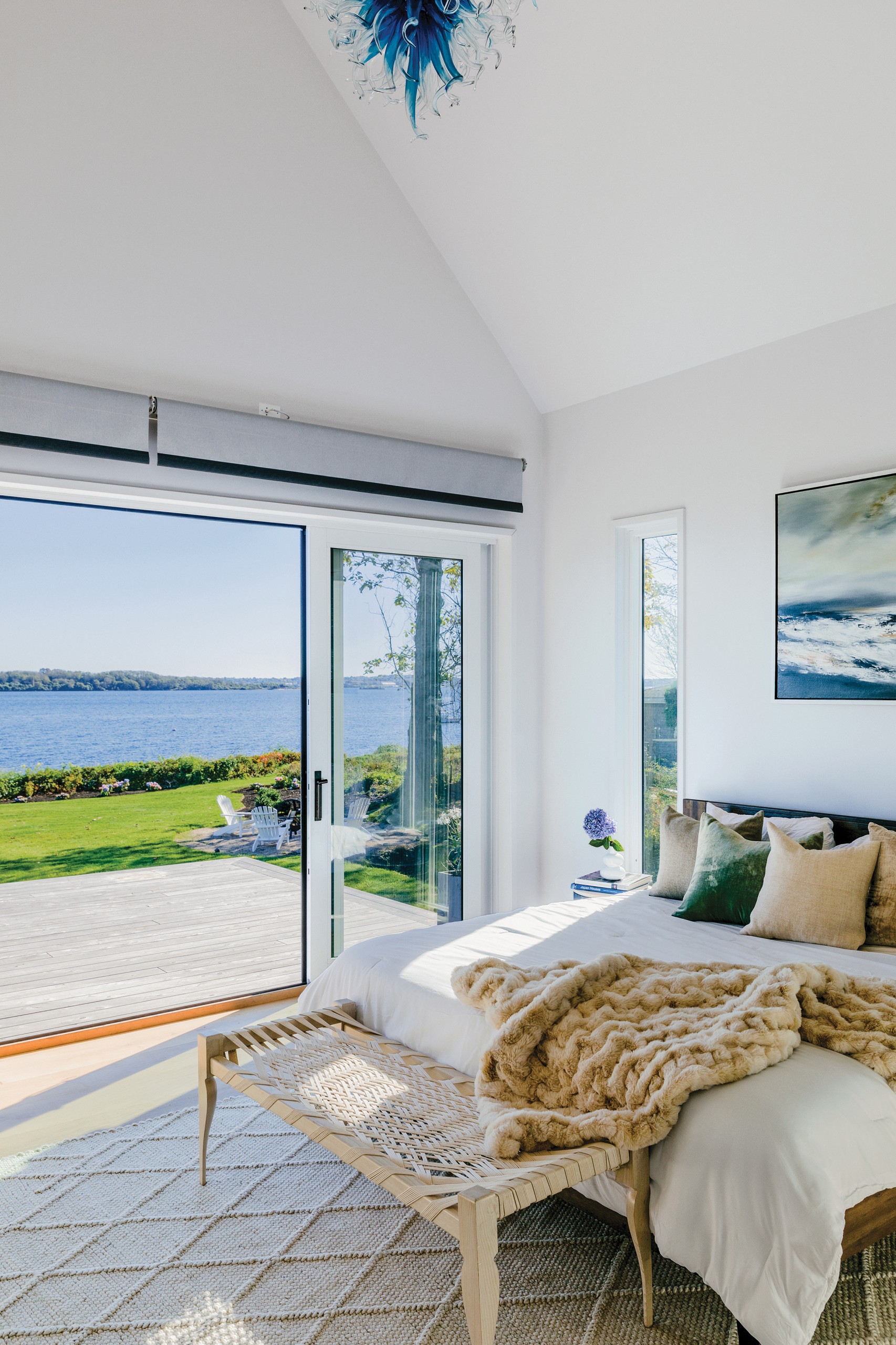 The Alexander family had been talking about building a new home for years.

Linda and her sons, Spencer and Caleb, always spent summers in the family home on East Shore Road in Jamestown, in a 150-year-old converted horse barn built by the boys’ great-great grandfather, who emigrated from Scotland.

The pandemic gave them the jump-start they needed to begin the project. 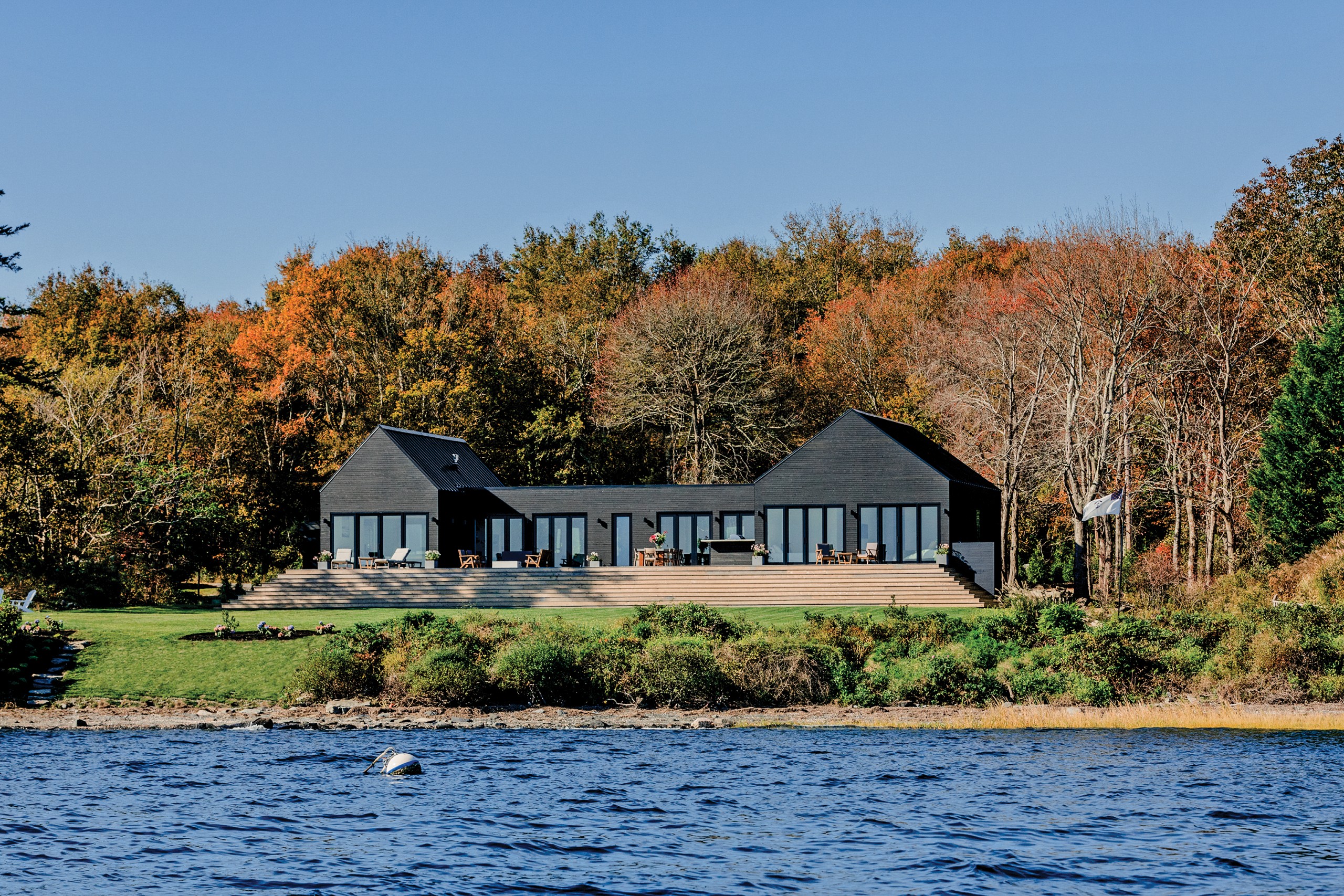 The home has an expansive view of Narragansett Bay. Photography by Max Burkhalter.

Spencer, principal at Anderson Alexander who lives in Newport, started work in earnest in October 2020, after noodling through various designs for five to six years. Demolition started in December 2020.

“I had a lot of emotions that day,” Spencer says. “Sometimes it’s hard to change, especially when something has lasted for 150 years.”

He always knew he wanted to maximize the parcel’s stunning location: the backyard slopes down to meet the East Passage of Narragansett Bay. As children, he and his brother would race from the driveway to the back of the house, which faced the water, when they came home, and spent many a summer day there swimming and sailing.

Spencer situated the 2,200-square-foot home parallel to the water, so that nearly every room has a view of the cerulean sea. The entranceway, flanked by full-length custom cabinetry and built-in shelving, perfectly frames the scene. And a slab of rock that generations of family members crossed over on their way to the shore was brought around to the front entry, where it’s the first thing visitors’ feet touch before they head inside.

Rooms with a View

The converted barn had an open area for family to gather, something Spencer wanted to carry through into the new home. So he crafted a combined kitchen, dining and living space that’s swathed in light, thanks to four eight-by-eight-foot custom windows in the front of the house and corresponding bifold doors that open up completely to the outdoor deck.

They perfectly frame the view of the ocean, both outdoors and inside, earning the home its moniker: the Picture House. 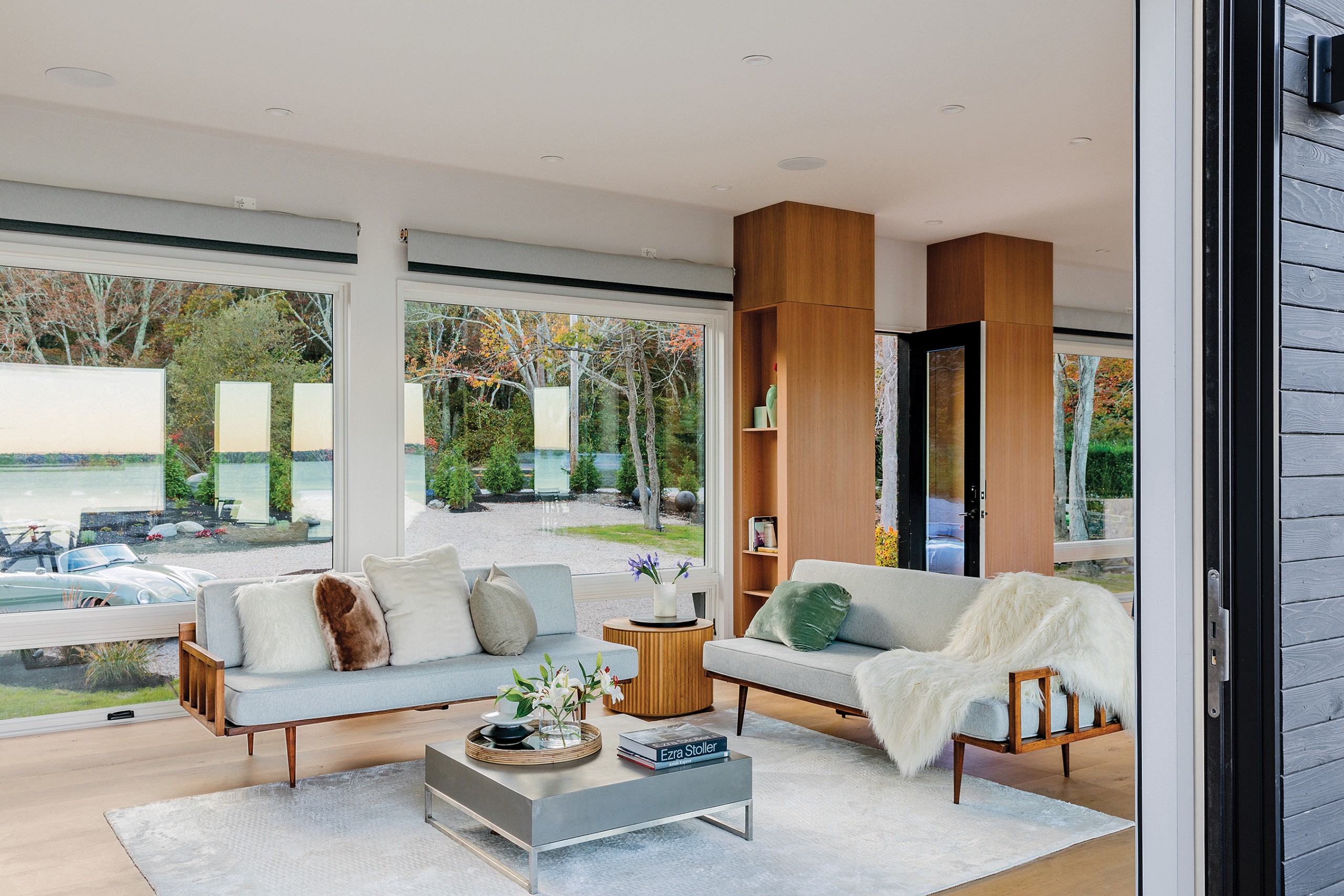 Linda loves entertaining for family and friends, so she needed a hard-working kitchen space: hers features white quartz counters and backsplash, Newburyport Blue-hued cabinets and a professional-grade Fisher and Paykel stove.

An eighteen-foot wooden beam from the old barn was fashioned into a table that seats ten in the dining area. Fanciful glass fish, custom-made by the Glass Station Studio and Gallery in Wakefield, hang overhead, lending a nautical look.

“This area is definitely made for entertaining,” Spencer says. 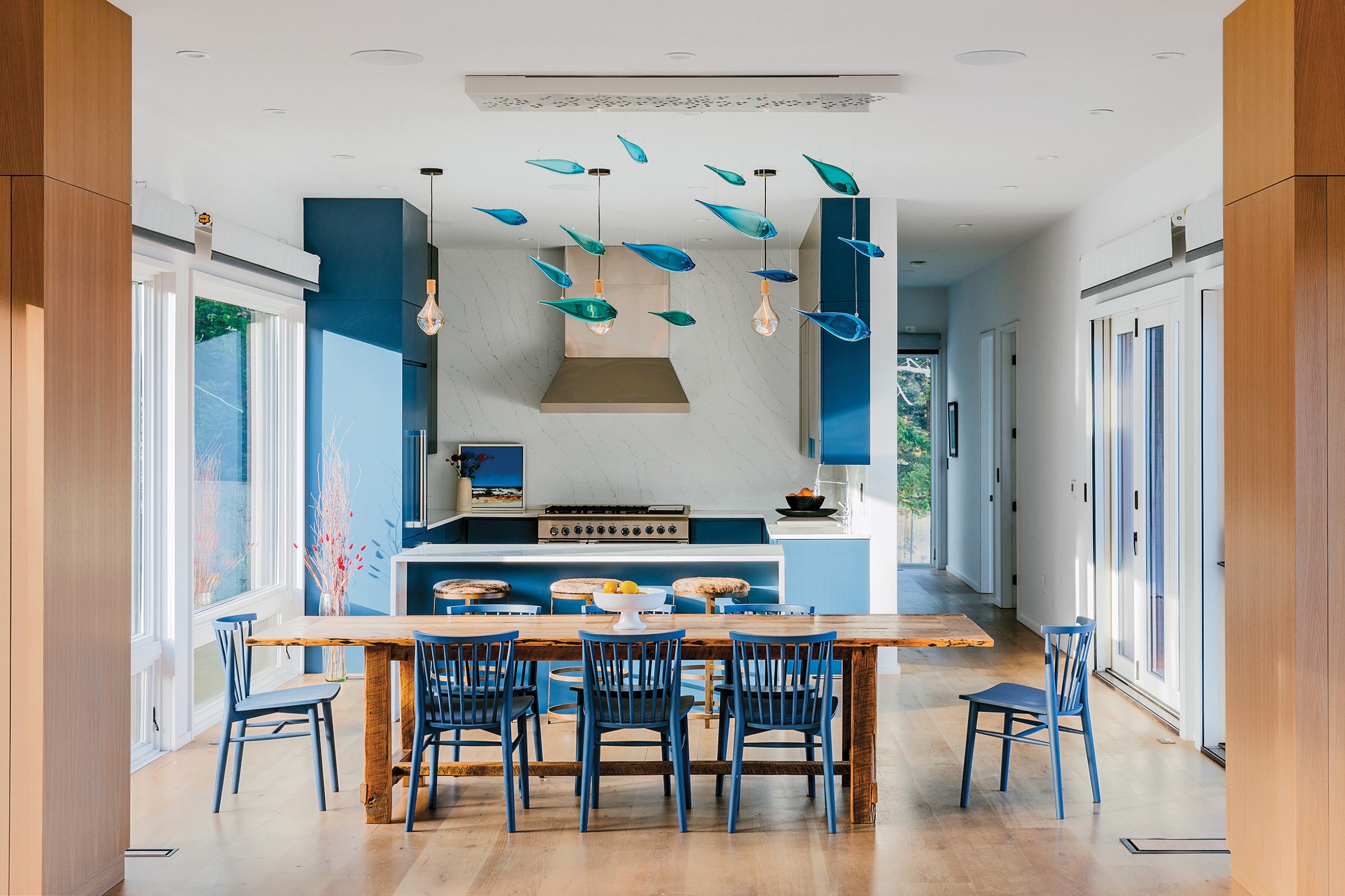 During the planning process, Linda had just one request: She wanted to be able to see the water from her bedroom.

Spencer accepted the challenge, designing the master suite so it has views from both the bedroom and bath areas, thanks to an electrified bathroom window that becomes opaque at the touch of a switch. The 113-by-78-inch pane weighs 800 pounds and took six to seven workers to hoist into place. 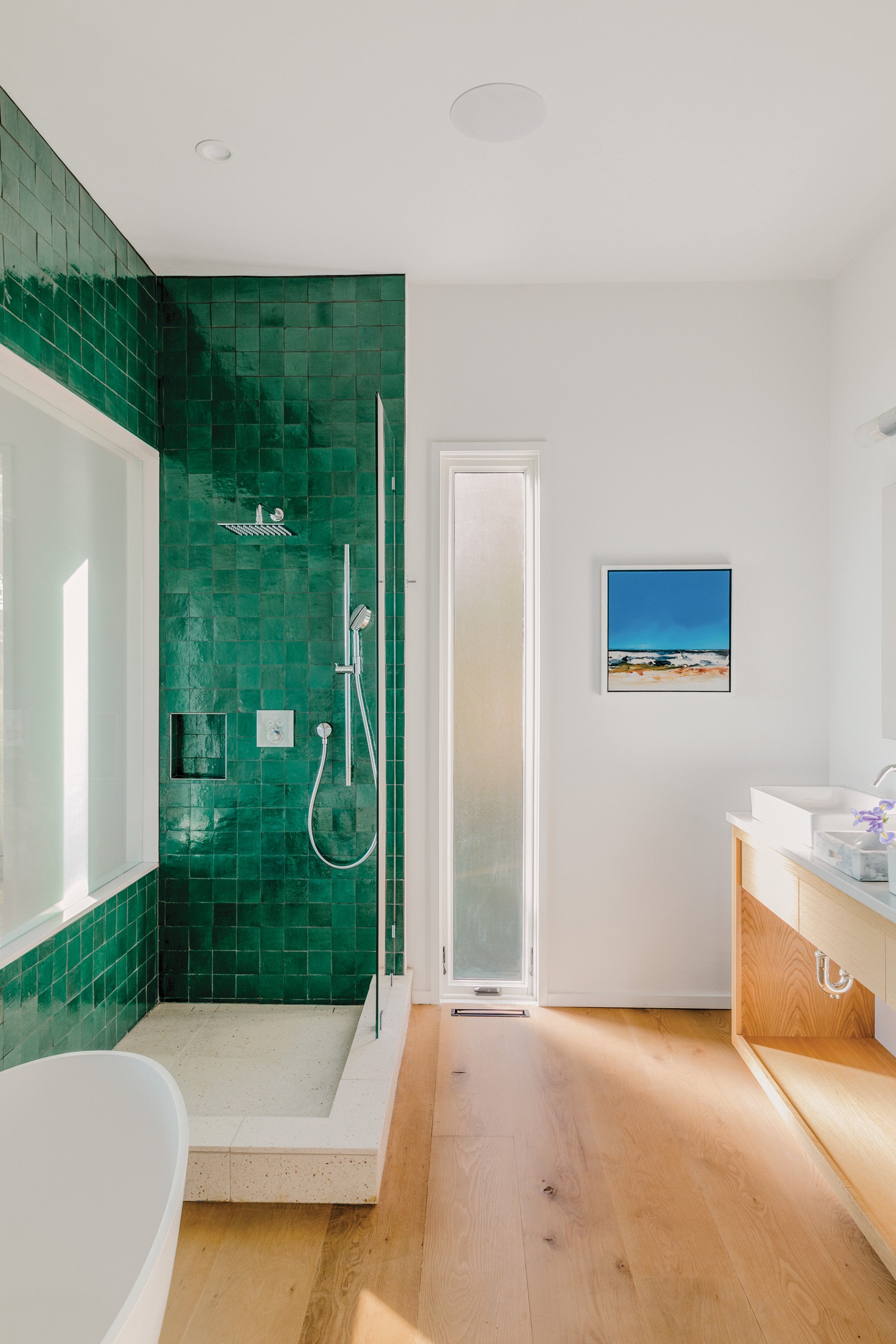 Handmade emerald green Moroccan Zellige tiles — no two are the same — catch the light and frame the shower and freestanding soaking tub. The suite has a spacious walk-in closet, sixteen-foot-tall cathedral ceilings and doors just inches from the sleeping area that open directly onto the deck.

“I love opening my eyes in the morning and seeing the water,” she says. “It’s so peaceful and calming.”

The home has two baths (plus an outdoor shower) and three bedrooms; one in Linda’s suite and two others in the north wing of the home. All three bedrooms face the water and have access to the spacious outdoor deck. 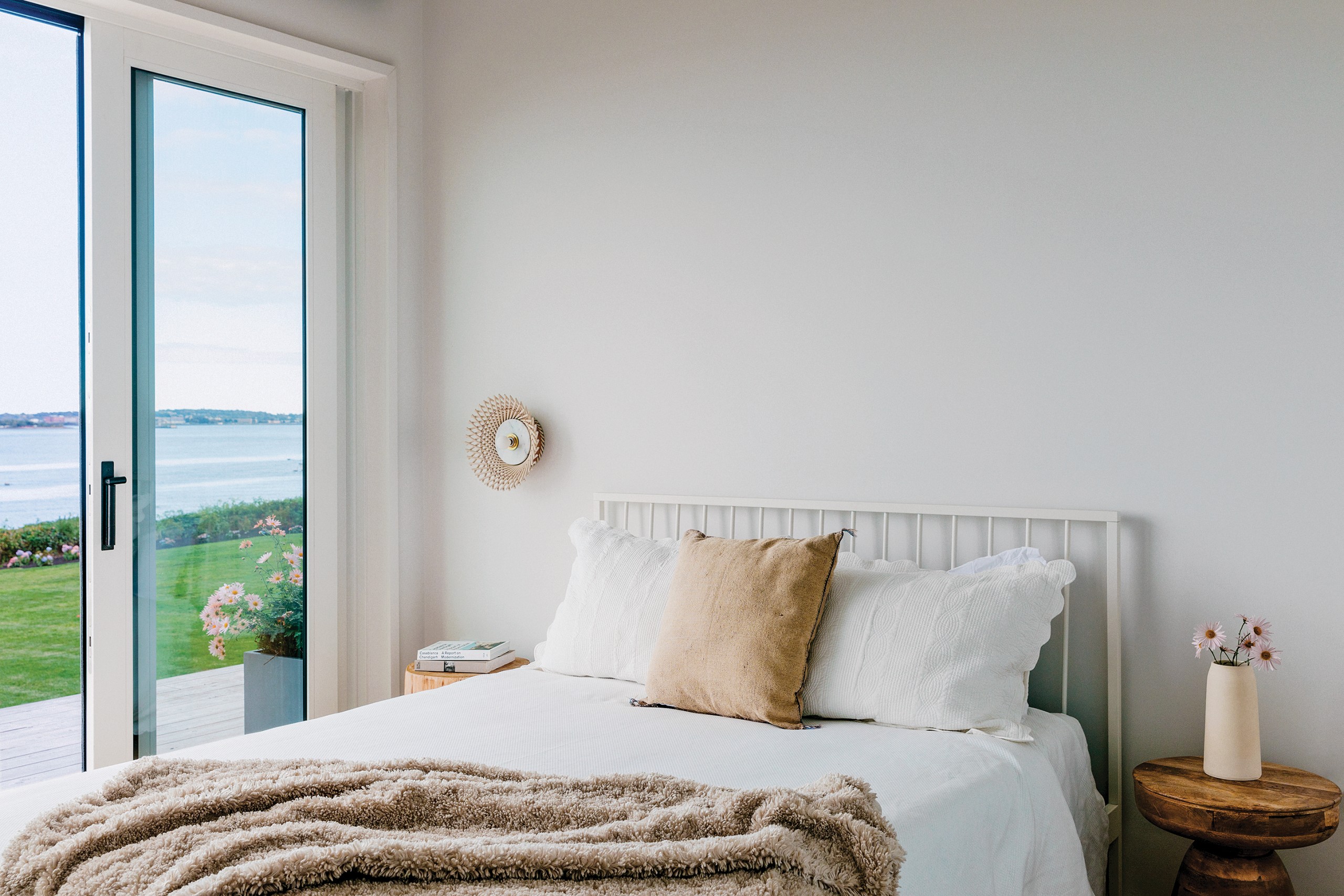 A guest bedroom opens up to a deck. Photography by Max Burkhalter.

The two guest bedrooms are exactly the same, thanks to some good-natured sibling rivalry.

“My brother and I compete about everything,” Spencer says. “So I made both rooms identical. The only difference is the view.”

The bedroom, bath, storage and laundry areas are hidden in the north and south wings of the home, with windows only facing the water. 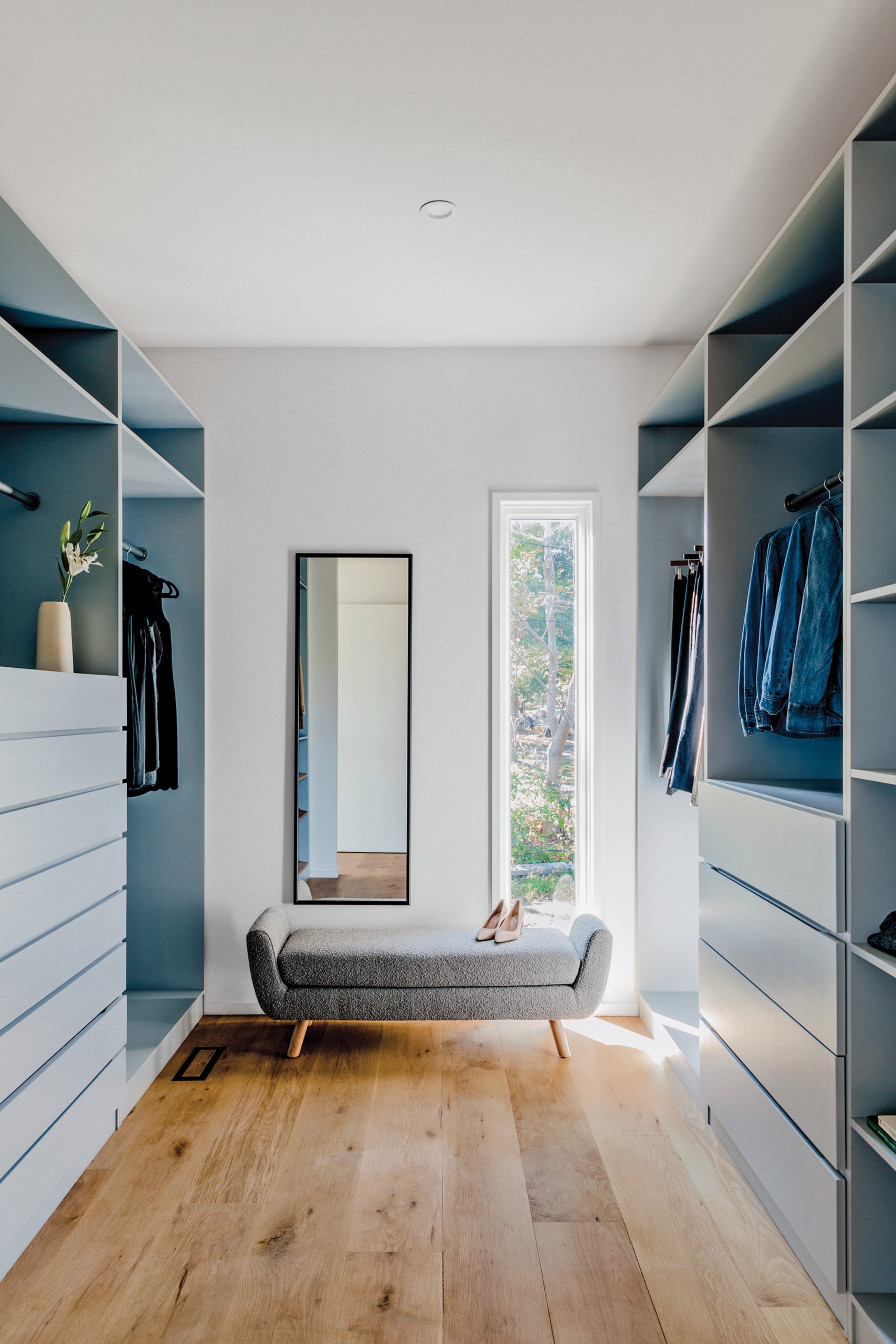 A walk-in closet in the master bedroom suite. Photography by Max Burkhalter.

The home is clad in four-inch cedar siding, charred using a Japanese technique called shou sugi ban. It brings out the wood’s distinctive knots and graining, and the ebony color echoes the dark hues used in Colonial times to keep homes warm. The exterior is all hand-nailed.

“I didn’t want to paint it,” Spencer says. “This gives it an effect it wouldn’t have otherwise.”

The finish is a nod to Spencer’s father, who was stationed in Japan during World War II and died when Spencer and his brother were young. 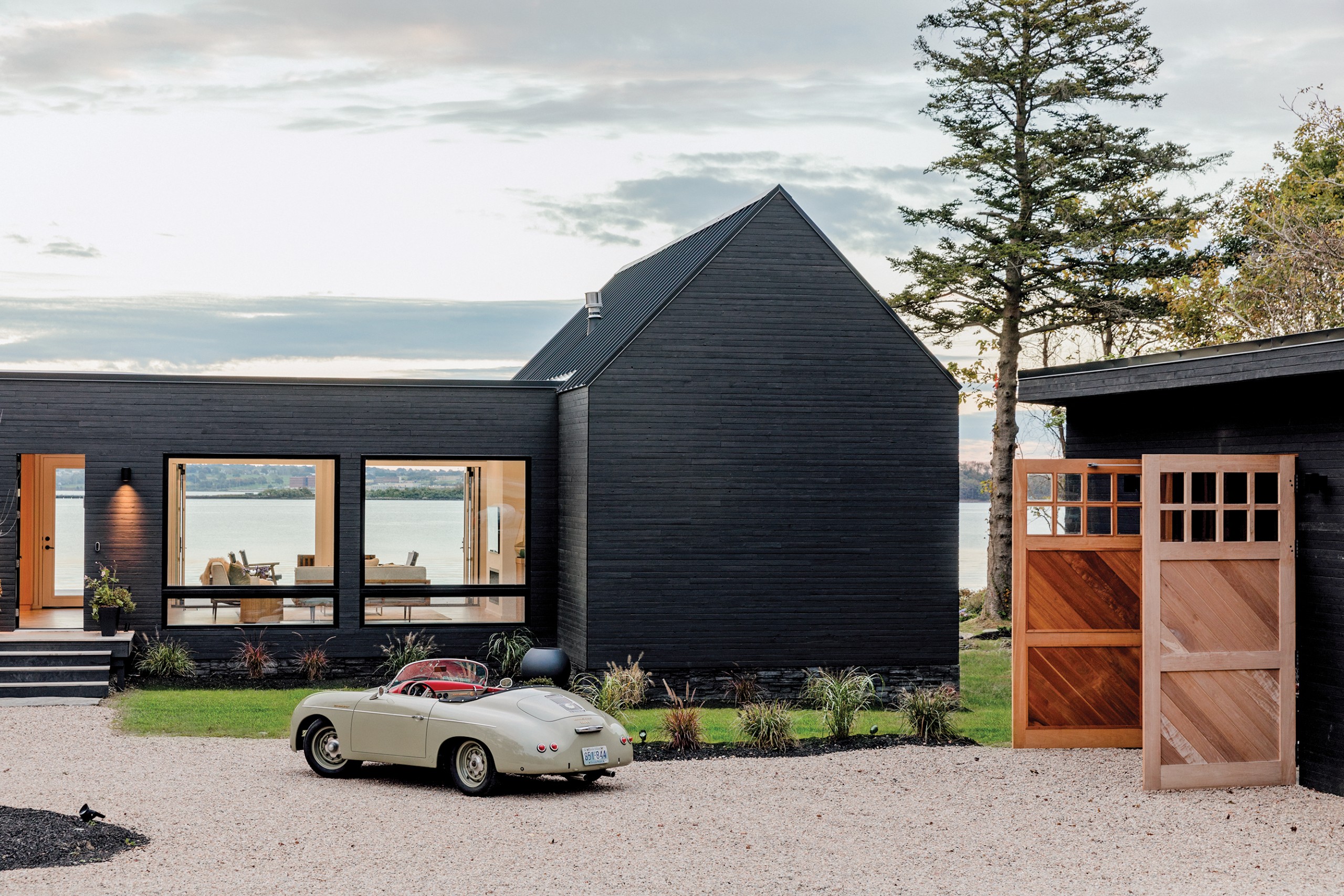 The home’s front entryway and garage. Photography by Max Burkhalter.

At night, the effect is ethereal: The wooden parts of the home disappear into the background, leaving a luminous living and dining area that seems to hover in midair.

A 1,700-square-foot deck — also cedar — runs along the entire length of the home, providing plenty of gathering space in the warmer months. It features a built-in custom barbecue area, which Spencer hurriedly tried to complete on the morning of his wedding last August.

“At noon, he was covered in concrete,” says his wife, Dorit Hershtig. But he managed to clean up in time for their nuptials at nearby Fort Adams.

In fact, the first time they used the home for entertaining was to host a wedding dinner for the couple. Linda also held Thanksgiving dinner in the home, and is looking forward to hosting a Fourth of July celebration as well.

It’s just the first few of many gatherings the close-knit family hopes to hold in their new digs.

“It’s really important for us to be together and do things together,” Linda says. “I wanted to make sure I could keep it. Now they can keep it and have their kids here, and it can go on from generation to generation.” 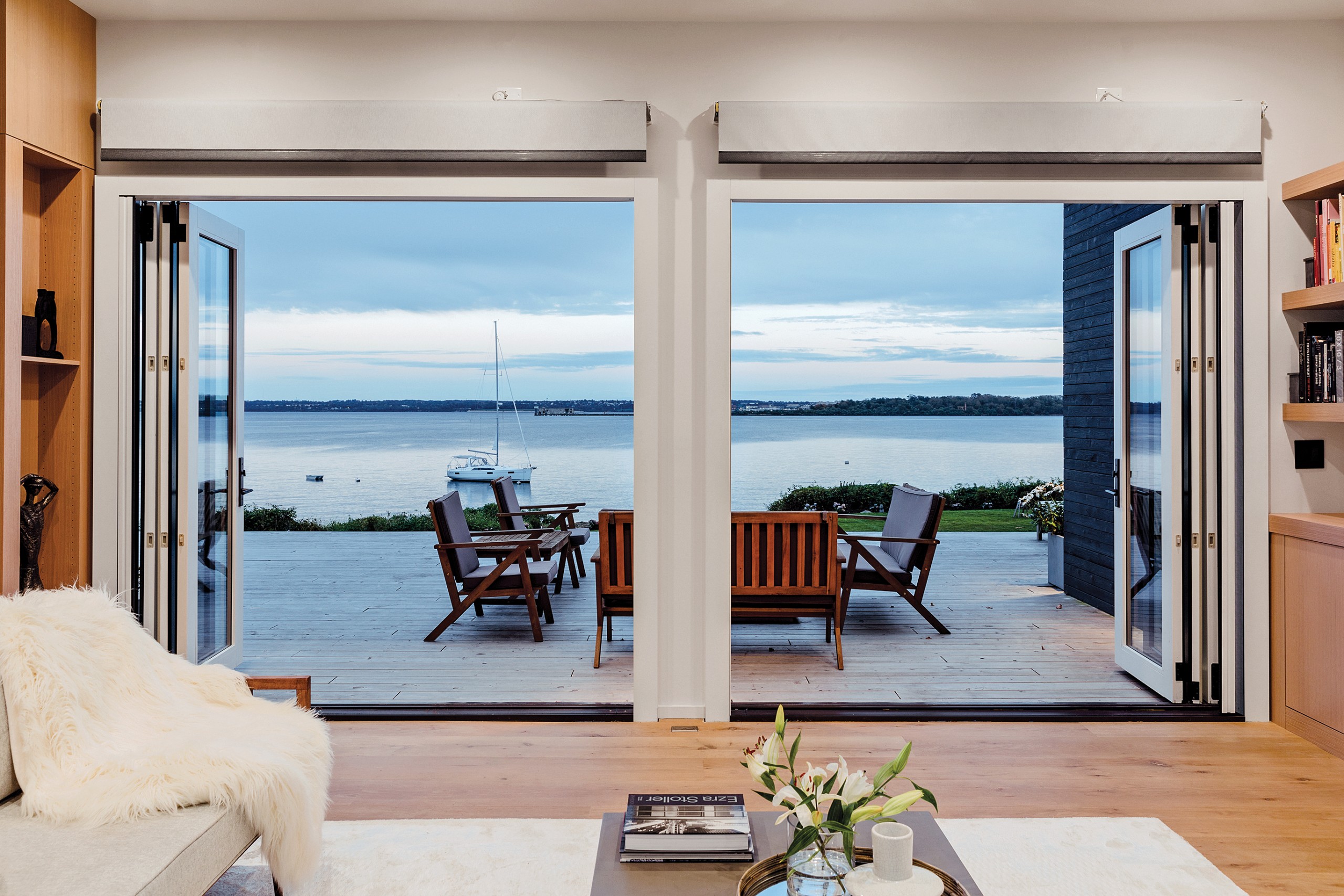 The living area and outdoor deck almost blend into one, with the East Passage just beyond. Photography by Max Burkhalter.