Cross the border and take your tastings to a new level.

The first thing I notice as my husband and I head out to the flagstone patio at Westport Rivers Winery is the bright red Rhode Rage food truck parked a few yards away from the sea of vines blanketing the horizon. I pause for a minute, trying to reconcile the trendy urban vehicle with the bucolic greenery. Before I can ponder too long, my husband beelines for the truck window to scope out his choices, and I immediately realize the brilliance of Food Truck Saturdays. Thriving at its thirty-year mark, the family-owned vineyard has built its success on taking chances.

These days, Westport and the Russells — sons Rob and Bill came aboard as the vineyard manager and winemaker, respectively — are renowned for their sparkling wines (try the delicate-yet-fruity Farmer’s Fizz for a prosecco-style pick-me-up). The vineyard produces nearly 7,000 cases of wine per year, supplying about twenty Rhode Island and a dozen Boston-area restaurants with Westport Rivers selections for their menus. After our tour, I can’t get enough of the crisp, bright pours (six tastes for $10), and my husband and I snap a few photos in front of a vineyard backdrop that’s so picturesque it looks unreal. westportrivers.com

From Westport, we drive about ten minutes east to Coastal Vineyards in South Dartmouth, a little oasis of vines — they yield 800 cases a year — tucked away on a ten-acre tract of land surrounded by a subdivision. Owners Dave and Linda Neilson have grown more than a dozen different grapes since 2005, but today it’s their renowned tasting room personality, Bob Tiedemann, who delights us with every pour at the backyard tasting bar. Not only is his viticulture commentary entertaining and genuine, but Tiedemann is also a star chef, and he serves us homemade chocolate clusters and savory dips while we sip. We love that the tasting notes include food pairings for each wine so we know what to serve with our Asian stir fry versus our pasta bowls, and Tiedemann sends us off with a mouthwatering cassoulet recipe to pair with a Coastal Vineyards’ 2012 pinot noir. coastal-vineyards.com

Another quick shot north leads to Running Brook Vineyards and Winery in North Dartmouth, where a recent management change has shifted momentum in a positive direction. I walk in to find operations manager, Ian Edwards, and his mother, Stacie, running the tasting room floor with easy smiles and banter. The space isn’t the flashiest nor the most polished, but the wine and the company more than make up for it. Their most popular varieties are the cabernet franc merlot, unoaked chardonnay and the vidal blanc. “We’re not just your typical winery experience,” Ian says. “We’re something a little bit more because we’re so laidback. This isn’t a pretentious setting. It’s about being real.” Check out live music on weekends, and don’t overlook the on-site commercial distillery (treat yourself to a bottle of the Black Sheep Aguardente brandy). runningbrookwine.com

Make It a Weekend

Stay: Try one of the lovely tucked-away Farm Coast bed-and-breakfasts; Westport Rivers recommends the harborside Paquachuck Inn in Westport Point, a 200-year-old building with a private dock for fishing or kayaking and salty old New England charm. paquachuck.com
EAT:  Grab a table on the waterside deck at the Back Eddy for a killer sunset view, and order a smorgasbord of Eddy signature stuffies, Block Island squid salad and Lauren’s lazy lobster casserole. Keep it local and pair it with the Westport Rivers chardonnay. thebackeddy.com
DON’T MISS: Nearby Buzzards Bay Brewing is also a Russell family business, with Westport Rivers winemaker Bill Russell pulling double duty as a microbrewer, using ingredients grown on the family farm. Hit up the taproom for a pint of Moby D or Buzzards Bay IPA. buzzardsbrew.com
Or, make your way to New Bedford’s Travessia Urban Winery, where owner/winemaker Marco Montez calls on his Portuguese heritage and upbringing in artisanal winemaking to produce wine with grapes from local vineyards. travessiawinery.com 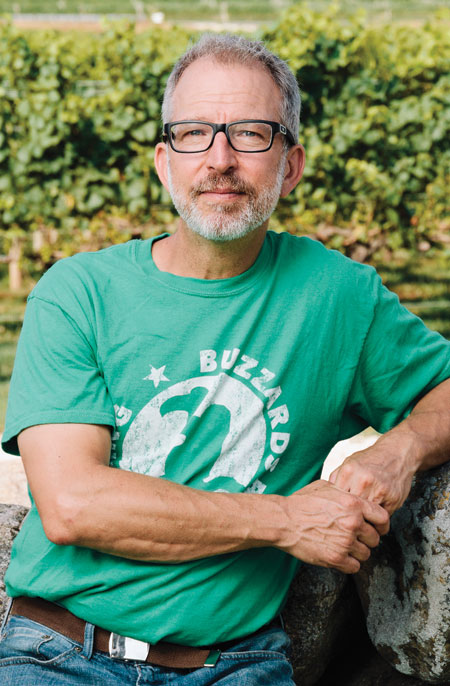 With four generations of viniculture in his veins, this winemaker has carried on a rich tradition at New England’s largest vineyard for twenty-seven years.

Did you always know you’d follow in your family’s footsteps? Being the second oldest son and a bit of a punk, I had no desire whatsoever to be anywhere near my family’s business. That said, if you look at certain precursors, you might have said, “You are destined to do this.” In eighth grade chemistry, we learned how to do fractional distilling, so I built a still at home. I enjoyed making hooch for me and my friends. (No one went blind.) My freshman year of college was the first batch of wine I made — five gallons out of a home winemaking kit under my desk.

You’re part of a fourth-generation duo with your brother, Rob. He grows it, you make it. What’s your relationship like? When I first came to work at the winery, we had significant differences in opinion about when to harvest the grapes. There’s a certain — I don’t know if I would go as far as to say a “philosophical” difference between vineyard managers and winemakers — but there’s a tension in that a vineyard manager wants to get the fruit harvested and off the vines, safe and inside, and the winemaker wants more hang time to get better flavor from the grapes. One of my friends came and worked for me, and said, “If I ever see you and Rob heading toward each other during harvest, I try to get as far away as possible.”

But you’ve resolved your issues? The funny thing is, around year eighteen of doing this together, he started being more concerned about the wine than even I was. We were at least more aligned in that we were both thinking about the flavor that would be in the bottle at the end.

You are also a microbrewer at Buzzards Bay Brewing — yet winemaking is in your DNA. Can you really love both? It takes a lot of good beer to make good wine. In harvest, at the end of the day, we’ve done nothing but taste super sweet grape juice and ferment things with super sweet acidity and sugars. Having a nice beer is tremendously necessary. In the mid-’90s, I was doing some moonlighting at brewpubs because I became very interested in beer and where the flavor came from. Quite frankly, when you start screwing with yeast, why stop at wine?

Westport Rivers has been described as a winery with “bold vision and daring tactics.” Can you elaborate? My dad’s spirit is really entrepreneurial, and he wanted to plant a vineyard somewhere that wasn’t so established. He settled on Westport of all places, partly because no one had done it here. We carried that adventurous spirit forward, and don’t mind doing things in the vineyard or winery that no one has attempted, or that are minority concepts in the wine world.

Like what? Give us an example. The Farmer’s Fizz: Recently, Rob and I were looking at the beer world; in particular, our friends up at Allagash were buying grapes from us every fall to use in beer and brewing, and coming back with it in Champagne bottles with a cork finish and wire hood. We said, let’s flip this over and look at the other side: What if we put wine in a beer bottle? It wouldn’t be so different from ciders, and it might be perceived as fun and interesting. We decided we’d do some and throw it out on the marketplace. And people really liked it.