What’s in the Water in Scituate?

The best water in the state flows from the Scituate Reservoir. But it came at a huge cost to residents.

Growing up, I learned to be specific about where I lived. Talking to an out-of-stater (or even a Rhode Islander unfamiliar with the state’s rural recesses) about my hometown almost always resulted in confusion. “You live in Scituate? That’s just north of Cape Cod right? Oh, the Scituate in Rhode Island. Are you sure it’s not in Massachusetts?”

If a Rhode Islander happens to know about Scituate, it’s usually for one reason: the clear stuff coming from their faucets. Water is the town’s main export. Sixty percent of Rhode Island’s population, and almost all of the city of Providence, gets its drinking water from the Scituate Reservoir. But an uncommonly history-savvy Rhode Island resident might also be familiar with the tragic story of the reservoir’s construction.

“My mother’s family had to move because of the reservoir, and it was heart-breaking. They were here even before the town was incorporated in 1731,” explains town historian and longtime Scituate resident Shirley Arnold. “They never did get over it.”

In 1915, legislation passed allowing the construction of the reservoir. Using eminent domain, the residents of central Scituate were forced to relocate. Mills, homes, farms and even cemeteries were destroyed or relocated to make way for Providence’s new water supply. The reaction of the townspeople was vitriolic to say the least.

“There were about nine documented suicides when the reservoir was built. It was absolutely devastating for some people,” Arnold says. “My mother’s family never wanted to talk about it, that’s how difficult it was for them.”

Although it had negative repercussions, Scituate wouldn’t be what it is today if not for the reservoir. 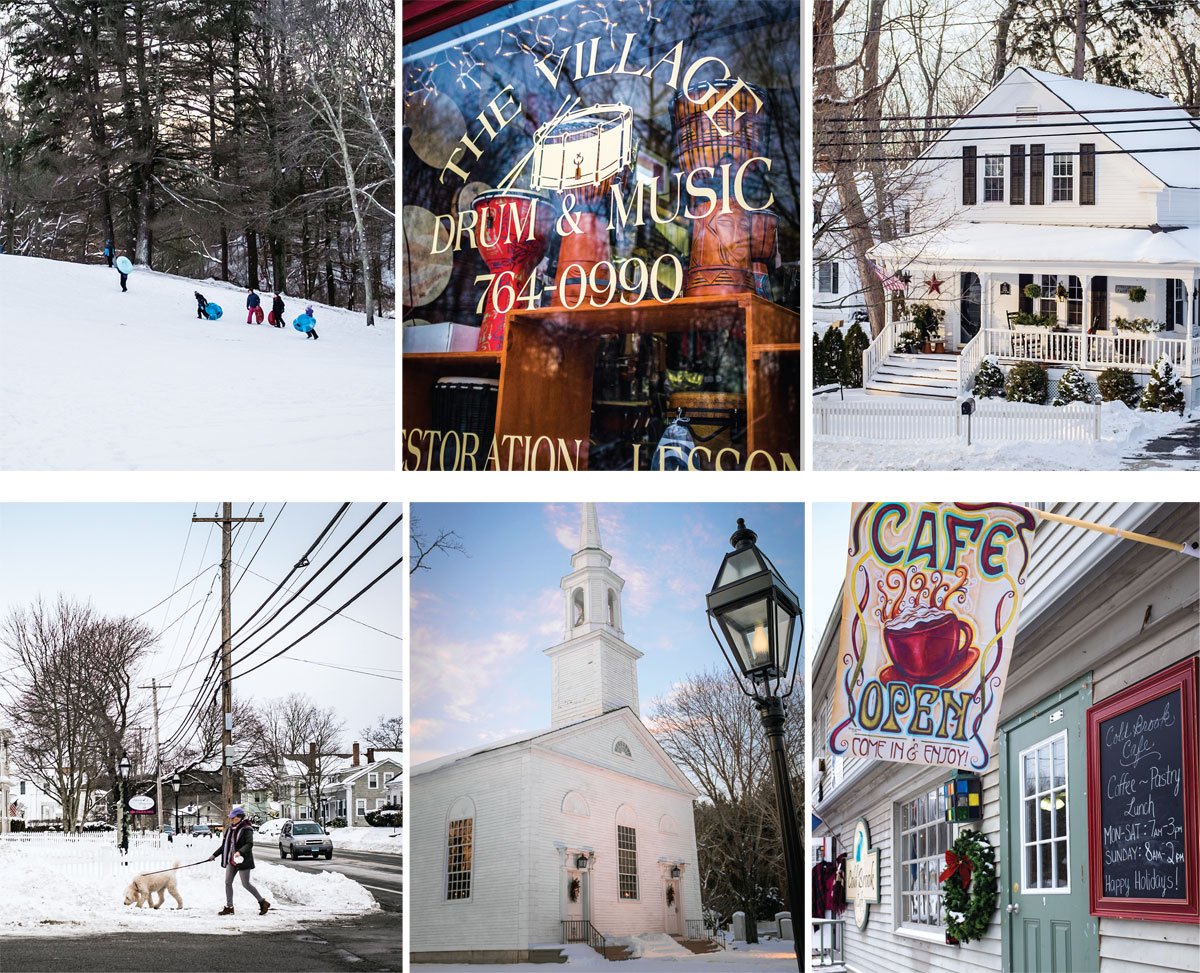 Children sledding down Esek Hopkins field; the Village Drum and Music, a shop in the town’s center; one of the many picturesque houses in North Scituate village; the Cold Brook Cafe, one of the town’s newer eateries; the historic North Scituate Baptist Church; a woman walks her dog in the town center. Photography by Chris Vaccaro.

“It was a blessing in disguise. The reservoir has kept the town rural and insulated it from too much change,” Arnold explains. “Despite the initial trauma, the town just wouldn’t be the same without it. Overall, it’s a great place to live.”

Besides the story of the reservoir, few people, even Scituate residents, know the other quirky roles the town has played. It’s been the home of intelligence agents, a battleground in the fight for racial equality and even the potential headquarters for a well-known political organization.

“They almost built the United Nations here. It was all very hush hush. In the end though, I think it was just too rural for them. I suppose it’s for the better. Imagine how bad the traffic would have been,” Arnold says with a laugh.

Chopmist Hill in western Scituate was visited by an inspection team charged with finding the United Nations’ new headquarters. The area met many of the geographic requirements that the team was looking for but, unfortunately, they were missing one thing: an enormous heap of cash. John D. Rockefeller spent $8.5 million to purchase a property in his hometown of New York City and offered it to the United Nations. They happily accepted.

One reason Scituate was such a serious contender for the UN headquarters was its top secret role in helping the Allies win World War II. The town was home to some first-class espionage.

“During the war, they built a radio station here. They picked up communications from Japanese ships in the Pacific that helped us win. It was all a big secret.”

An old Scituate farmhouse was decked out with sixteen miles of antenna wire and a team of forty eavesdroppers. The station picked up everything from spy communications within the United States to encrypted messages sent from German submarines, and it was kept a secret from the townspeople and the world at large.

Before being at the forefront of intelligence gathering, Scituate led Rhode Island in providing education to the state’s black community. The Watchman Institute, painted a crisp-white and supported by austere columns, seems at odds with the rest of North Scituate Village’s quaint Colonial architecture.

“It started out as a prestigious school for kids from around the state in the 1800s but eventually changed into a school for African-American kids in 1923.”

The building made it on the National Register of Historic Places for its role in local black history. But unfortunately, Scituate in the early twentieth century was a product of its times.

“The Ku Klux Klan started a couple of fires there and almost destroyed the building. It was a hard thing for those kids.”

Despite the aggression, the school continued to operate well into the ’50s, at which point it closed due to the death of Reverend William S. Holland, who ran it. For decades it was left derelict, crumbling with each passing season, until it was finally transformed into apartments. Although the Watchman Institute no longer exists, the town continues to have a solid school system, one that I experienced myself.

Growing up in Scituate, I found it hard to believe that anything more exhilarating than a barn fire or runaway cow had occurred in our sleepy town. But the memories of its longtime residents and the records they left behind prove otherwise. Maybe the most exciting events and changes have passed. Maybe they’re yet to come. 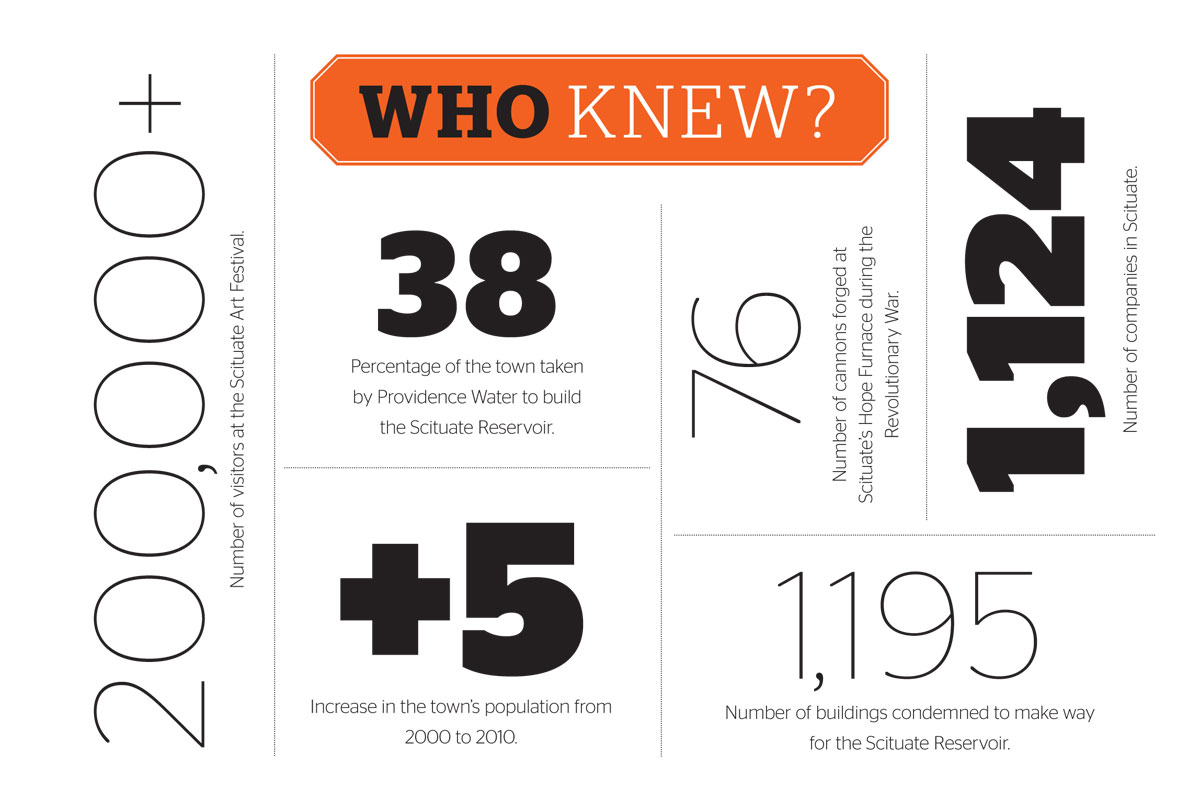