The women are donating their time to fulfill the Junior League of Rhode Island’s community focus to support youth aging out of foster care.

“We wanted to find a niche where we could make a difference,” says Junior League President Tory Trainor. “Most people move into a dorm or their first apartment, and they have family to help. Kids in foster care have no support system.” 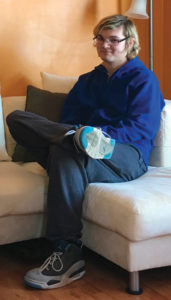 Jeff Wilson sits in his new apartment in Central Falls. Photo courtesy of the Junior League of Rhode Island.

On this day, they’re making over the apartment of Jeff Wilson, a young man who aged out of state care a month earlier and moved into the third-floor apartment with an acquaintance. Jeff stayed in state care three years longer than most. Under the disability provision, youth with emotional disturbances, autism or developmental disabilities are legally entitled to DCYF services through age twenty-one.

Jeff hung out at a friend’s house while the Junior Leaguers organized and cleaned the kitchen, installed a bed frame, built a bookcase and screwed in lightbulbs. They also arranged a pristine couch and chair in the living room, which was donated by another Junior League member.

Peters says they find young adults through individual caseworkers or agencies like Foster Forward. On makeover days, a handful of members stuff their SUVs with furniture and cleaning supplies.

“We generally do a huge clean, and sometimes it can take all day,” says Peters. “Lots of times they don’t have a full bed. Jeff, for example, had a mattress on the floor. Sometimes they might think it’s okay, but we want them to have a whole bed.”

Jeff entered foster care at birth; his mother, who was fifteen, gave him up for adoption. He was adopted at age two and reentered state care at fourteen after his adoptive mother died of cancer. He spent most of his teen years in residential foster homes, but after he turned eighteen, he toggled between two group homes in Pawtucket.

“The group homes sucked,” he says. “People stole my stuff, like my TV. I could never relax.”

Jeff says he appreciates the work the Junior Leaguers put into his apartment, who heard about his situation from his caseworker. Before the makeover, Jeff had little more than a few bags filled with clothes.
“It’s a lot more than I expected,” he says. “They really went above and beyond for me. I think it’s really great that they help kids who need this stuff.”

Although Jeff has new plates and cooking utensils, he struggles to afford food. He is eligible for SNAP benefits, but he has not yet enrolled in the program; the long lines and glitchy computers at the Department of Human Services office in Pawtucket are daunting.

He finds ways to stay busy. A talented pianist, he studies music at CCRI. He also belongs to on-campus social groups including the Role Players Guild and the Anime Club, and he is involved in a paranormal investigation group.

Jeff says a recent investigation revealed that a female spirit is following him. He thinks it could be his birth mother, whom he has never met and he assumes is dead, or his adoptive mother.

“It makes me feel good that at least I have somebody with me — but that’s if you believe in ghosts,” he says. “Joining the group was like a childhood dream for me. All of my friends are my family at this point.”

Jeff reiterated the phrase — “My friends are my family” — shortly after an overwhelming week in the spring. In the span of a few days, he’d gone off his medications, dropped his class at CCRI and moved in temporarily with a friend’s family. His doctor didn’t want him to be alone in his apartment.

Over the course of Easter weekend, Jeff tried to break through the dark cloud in his mind. But he knew that, eventually, he’d have to go back to his well-furnished apartment and deal with it alone.

Denisse, who is twenty-three, entered at seventeen. She was living with an aunt and making a living selling crack on the streets of Providence. She’d had a rough childhood; her mother was serving twenty years in a Texas prison and her father asked her to leave when she became pregnant with her daughter. Selling drugs was a quick way to make money. Until she was caught.

Denisse was sentenced to six months at the Rhode Island Training School and her daughter was placed in foster care.

“That was the worst pain in the world,” she says. “That was a wakeup call. I wasn’t allowed to see my daughter, and even when I got out, I wouldn’t get her back right away. It could take up to a year. But then I learned that to get out of jail sooner, instead of doing the whole six months, I could ask to be released to DCYF.”

Denisse was released to a halfway house, where she could see her daughter during supervised visits.

“While I was there, I started my [certified nursing assistant] course and I got my GED at the same time,” she says.

Then, together, Denisse and her daughter moved to a group home for pregnant and parenting teens, where they lived for nine months before she aged out.

With financial assistance from the YESS program, Denisse rented an apartment with a roommate and started work as a nurse’s assistant. Over the years, her monthly YESS checks decreased in amount — a feature of the program that helps participants ease into paying rent independently.

“They basically put me on my feet until I could walk on my own,” Denisse says. “By the time I graduated from the YESS program when I was twenty-one, I was stable.”

The course of Denisse’s life changed after she entered DCYF care. She avoided a long sentence at the training school, she was reunited with her daughter and she discovered her life’s work. But other former foster youth, like eighteen-year-old Hailey Salemi, feel betrayed by that same system.

“The only thing DCYF has done for me is give me health insurance,” says Hailey, who lives with debilitating stomach pain. “I had such good health insurance before DCYF, through my dad’s life insurance policy. I had to switch all of my doctors.”

Hailey lost both parents to cancer before she turned fifteen. Her dad was her hero, but she doesn’t remember much about her mom, who died when she was four. On her left hand, Hailey wears her mom’s onyx class ring from Coventry High School. Hailey graduated from the same school last year.

Just before her dad died, Hailey was adopted by her stepmother. After a traumatic year together, Hailey was removed from her stepmom’s care by a family court judge, who cited financial and medical abuse as the reason for removal.

“We didn’t see eye to eye on my medical situation,” Hailey says, recalling the day when her stepmother sent her to school with mono, which prompted an administrator to call the police.

And although Hailey’s stepmom received sizeable social security checks, they were evicted from their Coventry home, where Hailey was raised.

“I wasn’t supposed to get ripped out of my home,” she says. “I was supposed to stay with the same people in the same place. But that didn’t happen.”

After the eviction, Hailey’s stepmom moved to Scituate to live with her daughter from a previous relationship. Hailey lived with a friend in Coventry for a year, then moved into an apartment in Warwick with her older sister, Ashley.

Hailey aged out after her eighteenth birthday last October, and she works full time at Characters Cafe, a nonprofit restaurant in Cranston that also employs people with disabilities. Hailey loves the work. The colorful restaurant, which is outfitted with globe string lights, mismatched chairs and felt wall monsters, has a strong regular clientele. Hailey banters with customers and signs her checks with loopy hearts, smiley faces and custom “thank you” messages.

“I try to write something different for every person,” she says. “This isn’t any other restaurant, and I want people to know how special it is.”

Hailey tried to enroll at CCRI last fall to study math, but a problem with her financial aid paperwork kept her from starting classes on time. She decided to put off school until she’s on her feet, financially and physically.

“I just can’t stress about work, school and being sick,” she says.

A self-described country girl, Hailey likes to work on her dusty Jeep Wrangler and go off-roading with friends in the woods of western Rhode Island. She receives financial assistance through Foster Forward and uses the money to help with monthly expenses. She still lives with her sister, who plans to move to Florida after graduate school.

“Here she is, trying to start a life, and she’s being set back by me,” Hailey says. “It’s the least I can do.”

At a recent visit to the Foster Forward offices, Hailey signed up for a program that sends automated text messages encouraging participants to quit smoking cigarettes. She’ll get a text asking how many cigarettes she smoked the day before, she’ll respond, and then she’ll receive a text either congratulating her on smoking less or pushing her to do better. The service also reminds her of her answers to previous questions.

“It’s crazy; it uses what I said against me,” she says with a laugh.

First thing every morning, Hailey reads the texts from bed, responds, and waits for a reply.