“So, the wand is going around if you’d like to say anything. Whoever has the star has the floor,” says Merry Caswell, director of the First Star URI Academy, a nonprofit program that shows foster kids that college is a viable choice. The program, which is funded by Hasbro, is a partnership between the University of Rhode Island (URI) and Adoption Rhode Island. The big draw is a four-week summer camp where students stay in URI dorms, eat in the dining halls and take courses in math, poetry and music.

On this day in March, Caswell, a former middle school principal, stands before a dozen First Star students at the program’s annual luncheon. The event, with lasagna, meatballs and salad from B Pinelli’s, feels less like a reunion and more like an Irish funeral. The silver wand serves as a placeholder for a pint glass as the young people — most eighteen or nineteen years old — praise First Star, five years old and a national model but already dead. Hasbro can’t carry it alone, and cash-strapped DCYF has not committed to support the program.

The youngest First Star students are graduating high school this year. The oldest have gone on to college or vocational school or found work. In 2016, ten out of eleven First Star seniors graduated high school — a great success. According to national studies, more than half of kids in foster care drop out.

Caswell hands the wand to nineteen-year-old Lesly Franco, who entered foster care at age seven after years of abuse and neglect from her biological mother. She moved in and out of six group homes and residential placements and sometimes lived with her dad. Shortly after her eighteenth birthday, Lesly’s foster mom told her she had to leave.

“One thing I carry on is just learning about college,” she tells the group. “That was one of my biggest moments. And actually finishing high school.”

Lesly, who attended Toll Gate High School, was one of First Star’s earliest enrollees. She applied to Johnson and Wales to study criminal justice and was accepted, earning two scholarships from the school. But without a cosigner for a loan, Lesly was forced to make monthly tuition payments. She dropped out after one semester.

“Mentally, I wasn’t there,” she says. “The money wasn’t there. I just couldn’t do it. I was living on campus at the time, and I didn’t know what to do. I had nowhere to go. I had nobody.”

Lesly called First Star’s Caswell and moved in with her. After about a month, she found a room in an apartment in Providence. She now lives a few blocks from the Johnson and Wales Harborside campus and works for an aunt who runs a Salvadoran bakery.

Also at the luncheon is eighteen-year-old Elizabeth Harney, who attended First Star with Lesly. Elizabeth is running on zero sleep after an overnight shift at Au Bon Pain. She’s about to graduate from the Metropolitan Regional Career and Technical Center in Providence and will start classes at URI in the summer. She’s hell-bent on making college work for her, both to set an example for her four younger siblings and to repent for her mother’s mistakes.

“I love my mother to death, rest in peace, but I will not be like my mother,” she says. “Yes, we share traits. But that doesn’t mean I’ll go down the path she went down. I’m here to graduate, go to school.”

When Elizabeth was eleven, she found her mother in bed with her youngest brother, dead after mixing pills and alcohol. But, even before her mom died, Elizabeth and her siblings had been in and out of foster care.

They were separated for years. Elizabeth lived with her paternal grandmother; her younger siblings, who all have different fathers, were split up between two foster homes. They reunited with their mother for about a year before she died. Finally, their maternal grandmother took them all in under kinship care.

An exuberant natural leader, Elizabeth says she isn’t concerned about keeping up in college. Her catchphrase is “You heard my story, now you see my future.” She overcame adversity and she’ll continue to do it.

But she worries about leaving her siblings behind, who range in age from eight to fifteen. For a while, all five of them crammed into one bed in their grandmother’s studio apartment. They shared a blanket that Elizabeth still sleeps with today. Elizabeth stands up for them on the bus, cooks for them and makes sure they look presentable.

“This morning, they called me to ask how to make boiled eggs,” she says, shaking her head. “My sister — she can’t braid her hair. They’re all on technology. So now I’m saying: ‘Figure it out.’ They need to learn how to do it like I learned how to do it.”

Elizabeth is a mother to her siblings, and she’s better for it. Tanya Townsend, a twenty-six-year-old mother of two, experienced a similar thing. Tanya entered foster care at birth; she was born addicted to drugs. She periodically returned to her parents but eventually aged out of state care at eighteen.

Tanya bounced between group and residential homes, did drugs and spent more than a year in a shelter for truant teenage girls. During one months-long stretch, she moved placements every week, never staying more than a few days at each school. She dropped out in the ninth grade. But after her first daughter, Alyssa, was born, she changed.

“I stopped focusing on why I didn’t have my parents and I focused on why I had her,” Tanya says.

They left foster care the day before Tanya’s eighteenth birthday, their belongings stuffed in garbage bags. Their apartment was empty but for a mattress on the floor, and Tanya struggled to afford food. By her nineteenth birthday, she had memorized the local food pantry schedules.

“I’d be lying if I said there weren’t days we went hungry,” she says. “That first year was horrifying. And on top of that, I lived with the fear that my kid was going to be taken away from me because I couldn’t feed her.”

But things got better. By the time Tanya’s second daughter was born, she’d gained some footing.

“I got more experience, I learned more, I figured out how to navigate better and I built more relationships,” she says. “It got easier every year.”

Tanya enrolled at the Community College of Rhode Island (CCRI) and transferred to Rhode Island College (RIC) to study secondary special education. Now that her two daughters are in school, she can go to college full-time. She also works at the on-campus Paul V. Sherlock Center on Disabilities.

Additionally, Tanya is helming a collaborative workshop on foster youth, which will bring together RIC’s schools of nursing, social work and teaching. With all the attention paid to disadvantaged youth, Tanya says, she’s never taken a class where foster kids were part of the discussion.

“I’ve argued with my professors about this. It makes people extremely uncomfortable. They don’t know how to engage in that conversation,” she says. “People feel guilty about having what they have, but they’ve probably come in contact with a student in foster care without knowing it. And if they knew, they could’ve helped.”

The impermanency of state care — moving from school to school, bouncing from kinship placements to foster homes to group homes to shelters — is only part of the problem, says Dr. James Greer, a child and adolescent psychiatrist at the Providence Center who works with youth in foster care. When a child is exposed to significant, persistent trauma, the brain changes.

But all is not lost, Greer says.

“In the context of neurologic development, we know the brain is not completely formed until well into the twenties,” he says.

The cognitive capacities of eighteen year olds are equal to adults, Greer says, but the youngest of young adults haven’t developed the ability to regulate emotions, to stop and think, to weigh decisions.

“Those extra three years can have a huge impact in terms of outcome. They can have more of those positive experiences,” he says. “They need those additional supports, and not giving them is a setup for negative outcomes.”

Greer — who counseled young adults when they aged out at twenty-one and, now, when they’re aging out at eighteen — says most foster kids would be better served if they had the option to age out later.

“Just at a time when they’re reaching adulthood and being accountable as adults, their support system is pulled out beneath them,” he says. “If you want to talk purely dollars and cents, supporting them for two or three years longer — as opposed to costs accrued in corrections, increased rates of psychiatric hospitalization and lack of productivity — the payoff will be life long.”

According to an analysis by the University of Chicago, the extension of care to age twenty-one could result in per-person lifetime earnings benefits ranging from $43,000 to $113,000 — “roughly double the estimated amount spent on each foster youth supported beyond age eighteen, or a $2 return for every $1 spent.”

As it stands, young adults who age out of foster care in Rhode Island are eligible for state-funded supports. They receive health insurance through Neighborhood Health Plan until age twenty-six. And from eighteen to twenty-one, they qualify for up to $600 per month towards living expenses from the nonprofit, Foster Forward. 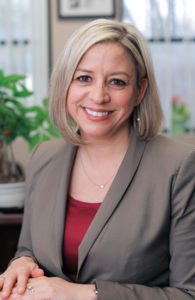 Lisa Guillette is the executive director of Foster Forward. Photography by Jose Navarro-Robles.

One young man, for example, recently aged out of foster care after living in a strictly monitored group home. He enrolled in YESS and moved in with a supportive adult, but he was also hanging out in Kennedy Plaza and smoking synthetic marijuana. One night, the young man went home high and assaulted someone. He was arrested and locked up for the night. When he was released, he went right back to Kennedy Plaza.

But that afternoon, a Friday, he also showed up at the Foster Forward offices looking for help.

“He was rocking back and forth, saying he just wanted to go swimming,” Guillette says. “We fed him a meal and tried to work with him to develop a safety plan. He insisted on spending the weekend in the woods.”

On Monday morning, he returned to Foster Forward and agreed to go to a sober house. His caseworker bought him clothes and took him to the facility where, not long thereafter, a staffer took him swimming.

“I can’t tell you how many of these kind of epic fails I see come through our door,” says Guillette. “How on Earth could the state of Rhode Island abdicate their responsibilities for this kid?”

There’s also no guarantee Foster Forward’s financial assistance program will cover all of the kids who need it. The YESS program, which piloted in 2007 and was revamped in 2010, was intended to support 165 kids. The pool of former foster youth has since ballooned to 222, while the DCYF contract award that funds the program has been cut by 15 percent. Guillette says the nonprofit has two options: Get more money from DCYF or reduce supplemental living expense payments across the board.

Guillette, who was a vocal opponent of the 2007 changes, says the federal government now offers incentives for states to expand services for foster youth. One year after Carcieri’s cuts, the Fostering Connections to Success and Increasing Adoptions Act of 2008 included a provision that helps states extend their foster care services to twenty-one.

Rhode Island’s DCYF is completing a fiscal analysis to determine how much it could benefit from the program, which would match the state’s contributions for youth who are income-eligible.

“We weren’t leaving money on the table before,” says Guillette, “but we are now.”