What it Feels like to be a Boston Marathon 2012 Finisher

I ran 26.2 miles through eight different towns and cities in eight-eighty-degree heat. It was one of the biggest accomplishments of my life, and I am so proud that my hard work and common sense powered me through the Boston Marathon. 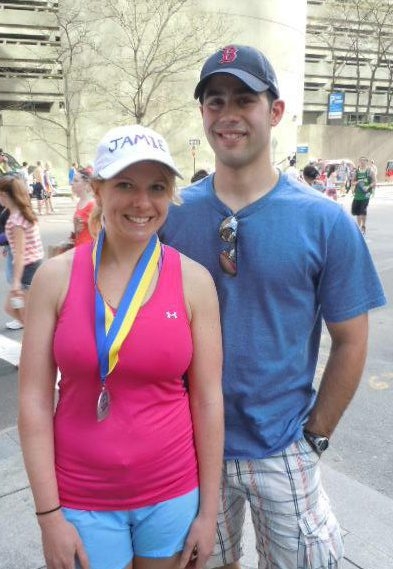 I did it! I ran 26.2 miles through eight different towns and cities in eighty-eight-degree heat. It was one of the biggest accomplishments of my life, and I am so proud that my hard work and common sense powered me through the Boston Marathon.

As many of you know, on Saturday, all registered marathoners received an email from the Boston Athletic Association that gave runners the option to defer entry until 2013, due to the dangerously hot weather that was predicted. There were 26,716 registered runners and 22,426 started the race on Monday. While some sources are reporting that the 4,290 people that did not pick up their numbers deferred until next year, that is not the case. In order to officially defer, they had to pick up their number at the expo, and they could not have started the race. Only 427 runners officially deferred, according the Runner’s World magazine’s website.

Deferring was not an option for me. I had trained so hard for this moment, and I knew I might not be able to run next year. I told myself I would take it slow and take care of myself. If I had no choice but to drop out, I would, but I wanted to give it a shot. I channeled my days of double sessions while training with my high school soccer team in the middle of August. Those memories made me realize I could do it.

Of the 22,426 that started the Boston Marathon, 21,554 actually finished it. That’s not too bad considering the conditions. I can tell you from personal experience that it is because of the organizers, spectators and volunteers that so many were able to finish in the heat.

As I waited in my corral to cross the starting line at 10:40 a.m., I began to wonder what I was getting myself into. As I said before, I am not an elite runner by any means, but I stuck to my training program, so I knew I was capable of finishing. But the temperature was already climbing. I was beginning to sweat, and the closely packed bodies around me made me dizzy. The stink of body odor was overpowering. My stomach felt unsettled. Sweat glistened off of everyone. And we hadn’t even started running yet. It took about fifteen minutes of waiting, but we finally crossed the starting line, and thankfully runners began to spread out so we could breathe more fresh air.

I kicked off my pace with a light jog. I had researched how to get through a hot marathon, and a chart provided by a friend told me to adjust my pace by at least a minute and half. That meant that my usual eight and half to nine-minute miles, would have to become ten-minute miles or slower. It seemed like a lot, but it wasn’t hard to slow down in the heat.

Early in the race, I managed to pass Flo Allen, mother of Boston Celtics star, Ray Allen, who ran for Team Joslin of the Joslin Diabetes Center in honor of her grandson, Walker. She was wearing a shirt that said “Mrs. Allen,” and as I ran past her, I screamed, “Thank you for bringing him into this world!” Earlier in the day, I had also seen former New England Patriots linebacker Tedy Bruschi, who had organized a team of runners for his foundation, Tedy’s Team, which supports the American Stroke Association.

Volunteers had water and Gatorade for runners at nearly every mile. But we didn’t even have to wait that long to quench our thirst because everywhere you looked, a spectator stood on the sidelines, handing out fluids. I did not skip a chance to sip, but was careful not to drink too much, as that can also be dangerous. Bystanders also had blocks of ice, freeze pops, oranges, jelly beans, pretzels, watermelon, sponges; you name it. I felt like I was trick or treating for goodies along the whole route!

As we reached some of the more residential areas of the route that included Hopkinton, Ashland, Framingham, Natick, Wellesley, Newton, Brookline and Boston, people had their garden hoses and sprinklers spraying water to cool off all the runners. I did not waste a chance to get doused in order to stay cool. Not only was I collecting goodies like Halloween, but I got to be a kid running through the sprinklers on a hot summer day. 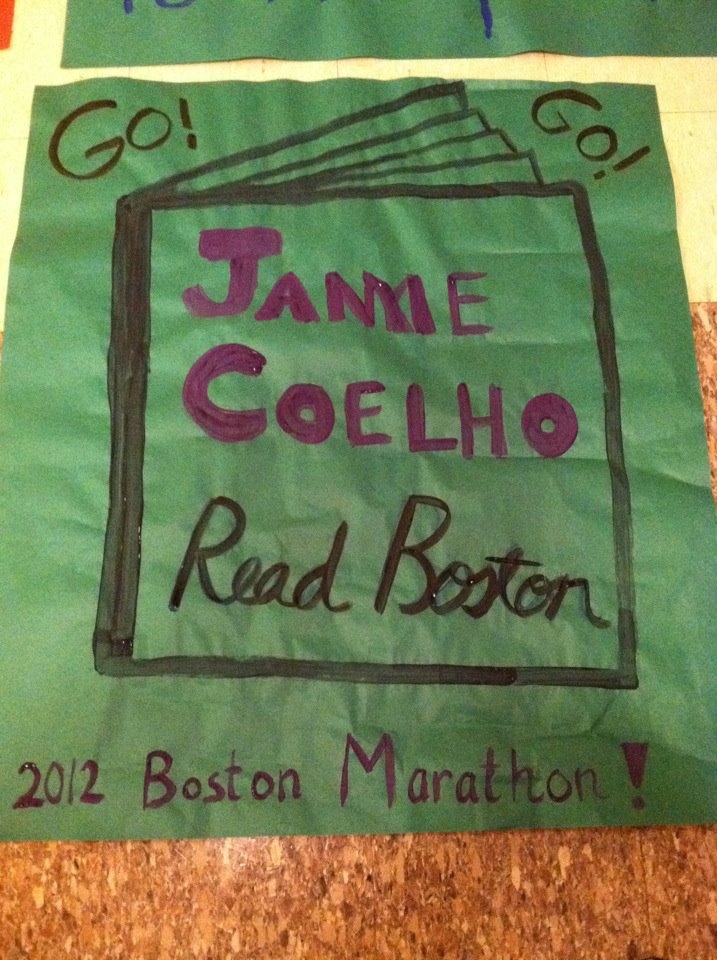 Then there was the cheering and screaming that kept me alive. I wrote my name on my hat, so that strangers could cheer for me. Originally, I had planned to run with music, but there was no need, because the screaming was so loud, I could not hear my music anyway. Everywhere I ran, I heard “Come on, Jamie!!” It freaked me out sometimes because I kept turning and expecting to see someone I knew. The screaming was the loudest at Wellesley College’s Scream Tunnel at Munger Hall, where the women make signs for you if you request one on facebook (I did). The ladies also hold up signs asking for kisses. Many of the male runners will stop to get kisses from the women who are holding signs that say, “Kiss me, I’m from Maine,” “Kiss me, I’m a Hungarian Gypsy Princess,” and “Kiss me, I’m a feminist.” You get the idea… I skipped the kisses, but got high fives along the entire halfway point of the race.

At mile seventeen in Newton, my family (mom, dad, sister, brother and a family friend) waited for me with an icy towel, ice packs and water, and four smiling children—my two nieces and two nephews—who were so proud of their auntie. Seeing them brightened my spirits and gave me the strength to run nine more miles. Then I knew I would see my husband and more friends at mile 25 near Fenway Park, so that gave me something else to look forward to. They were waiting with a hot-pink sign and ice cold beers, which they were handing out to runners as they neared the finish. My cousin and more friends were also waiting at the finish.

I am so thankful to my family, the volunteers, medics and spectators who took the time to help all runners, and especially those kind people who sacrificed their water bills to help runners stay cool. While I was lucky enough to keep my cool, other runners were not so lucky. I saw many people who were in need of medical assistance. It was scary to see so many runners on the side of the route lying down passed out with the medics around them trying to deliver oxygen. Others got taken out in ambulances and wheelchairs. A few times on the route, runners had to move over to let an ambulance through. 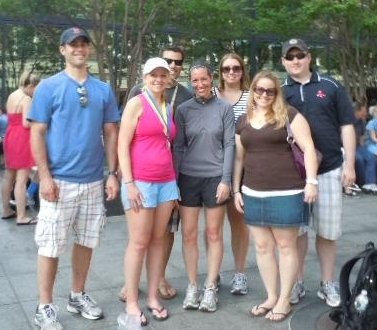 At mile twenty-two, I just happened to look over at a medical tent and I saw my good friend lying on a stretcher on her back with her eyes closed. I ran up to her, and lightly kissed her on the forehead. She opened her eyes and couldn’t believe it was me. I don’t know how I spotted her. She had low blood pressure, and the medics made her lay down. They weren’t going to let her leave to finish the race. She wasn’t feeling well, but I thought she looked okay. She had come so far, and I was hoping she would be able to at least walk the remaining three miles to the finish. I stayed with her for a few minutes, then told her I would call her boyfriend to let him know what was going on at the finish. I was worried, but I still hoped she might be able to finish after some rest.

I ran through the Boston College area, and all of the students were screaming relentlessly. They all wore matching yellow wayfarer sunglasses, and they were too cool for words. One student held a sign that said, “I want sweaty hugs,” so I ran up to him and delivered.

Coming down Boylston Street to the blue and yellow finish line at mile 26.2 felt like gliding through heaven. All of a sudden my legs felt lighter as I was pulled like a magnet to the volunteers holding those medals. As they put the shiny object around my neck, I realized not only am I a Boston Marathon finisher, I am also a survivor. My time was four hours and thirty minutes.

As for my friend, she rested for about twenty minutes, got some fluids, and knew she would be okay to walk to the finish. She had to sign a release form in order to do so, but she earned her medal, too!

The Best Running and Exercise App Ever Invented

Training for the Boston Marathon on Heartbreak Hill

What to Eat Before Running a Marathon