What Came First, the Turkey or the Ham?

A brief and varied history of local Holiday dinner traditions.

What came first, the turkey or the ham?

Throughout history, Christmas dinner has morphed and changed with the food trends of the time. In the puritan days it was outlawed (a serving of jail time anyone?) while in the ‘80s a Christmas spread included big-money masterpieces like caviar dip with crudites and braised, stuffed flank steak. Today, we often hear of ham and turkey weighing down the table or, more locally specific, a table laden with the Feast of the Seven Fishes.

To figure out just why there’s a glistening ham, butter-basted turkey or feast of fish sitting in the middle of your Christmas food spread, we talked to chef Peter Kelly from Johnson and Wales, and Erin Williams from the JWU Culinary Arts Museum. 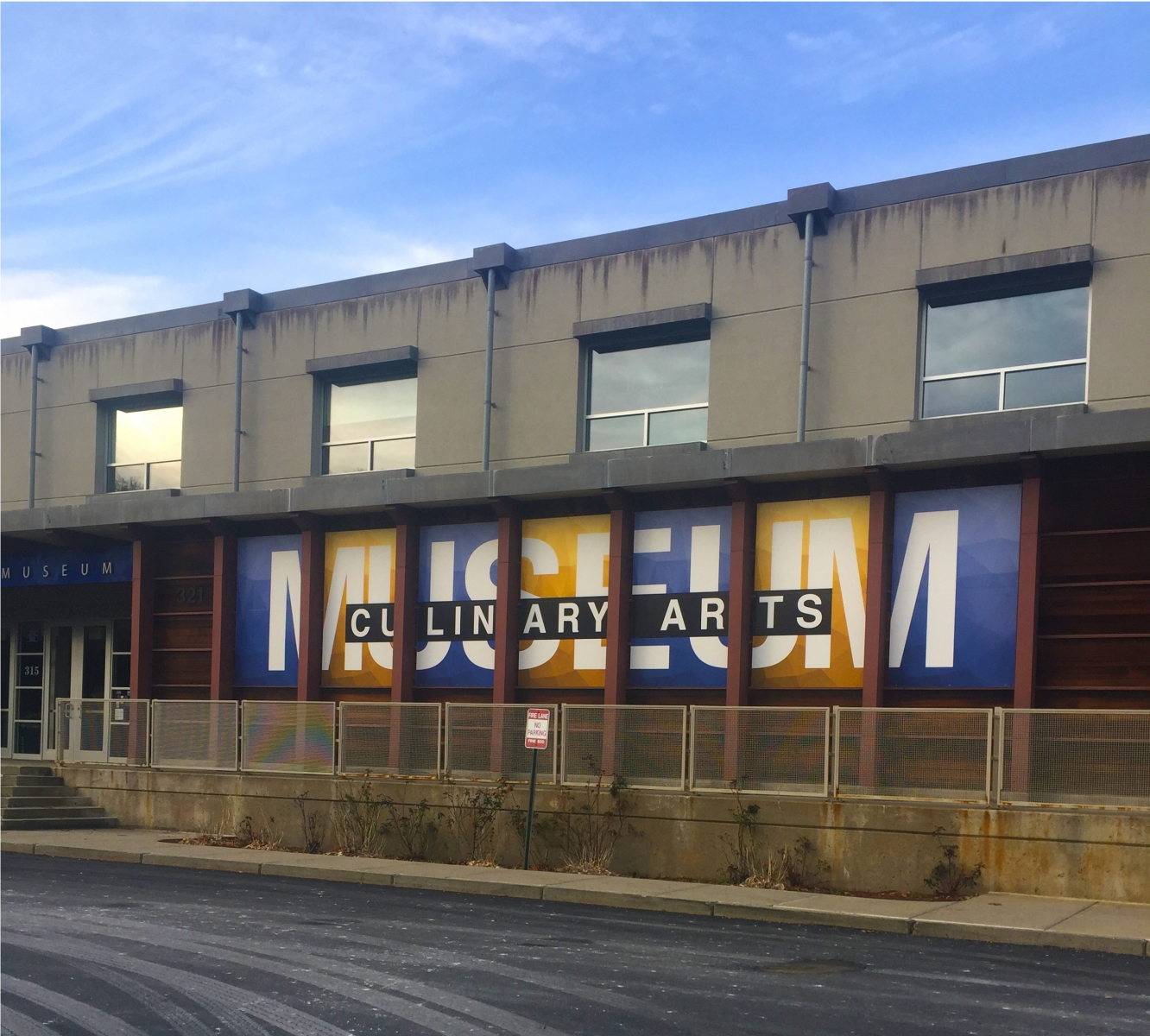 Turns out a lot of our Christmas meal traditions began with the poor land-workers who were just trying to get by in the cold winter months.

“The early settler used to refer to winter as the starving time,” Kelly says, “whereas we think of it as a time to stuff our faces.”

Frugality and the need to preserve food over the winter prompted the settlers to look towards what they had in surplus, which turned out to be the great, gobbling turkey.

“Turkeys were annoying birds that used to swarm the country and eat up the crops, so people didn’t hunt them for the festivities, they hunted them because they went after the crops that they needed to get through the winter,” he says.

The great Christmas ham, in all its crackling, shiny-glazed glory, was also a product of this self-preservation.

But, unluckily for the pig, it wasn’t so needed. When tasked with feeding a family and a pig during the cold, harsh winter months, the pig got the short-end of the stick to keep the family’s tummies full.

“You don’t want to feed the pig all winter, you’d rather feed your children.”

So that’s where the ham and turkey come from, a pilgrim past where frugality and winter survival pressed certain foods into wanting mouths.

But today, Christmas and holiday tables in Rhode Island are laden with so much more than just trussed up fowl or glistening pork legs.

Rhode Island has always been, as chef Kelly calls it, a bit of a “beef stew” instead of a “melting pot.” That is, a place with a rich immigrant past (looking at you Italy, the Azores and Portugal) that brought and forged new Christmas traditions that are still visible today.

The Feast of the Seven Fishes is a prime example. Called La Vigilia in Italian, you will find plates heaped with baccala, smelts, calamari tendrils and rings, eels, mussels, snails and clams. Since Rhode Island is the Ocean State, this Christmas tradition was an easy one for Italian immigrants to re-create. 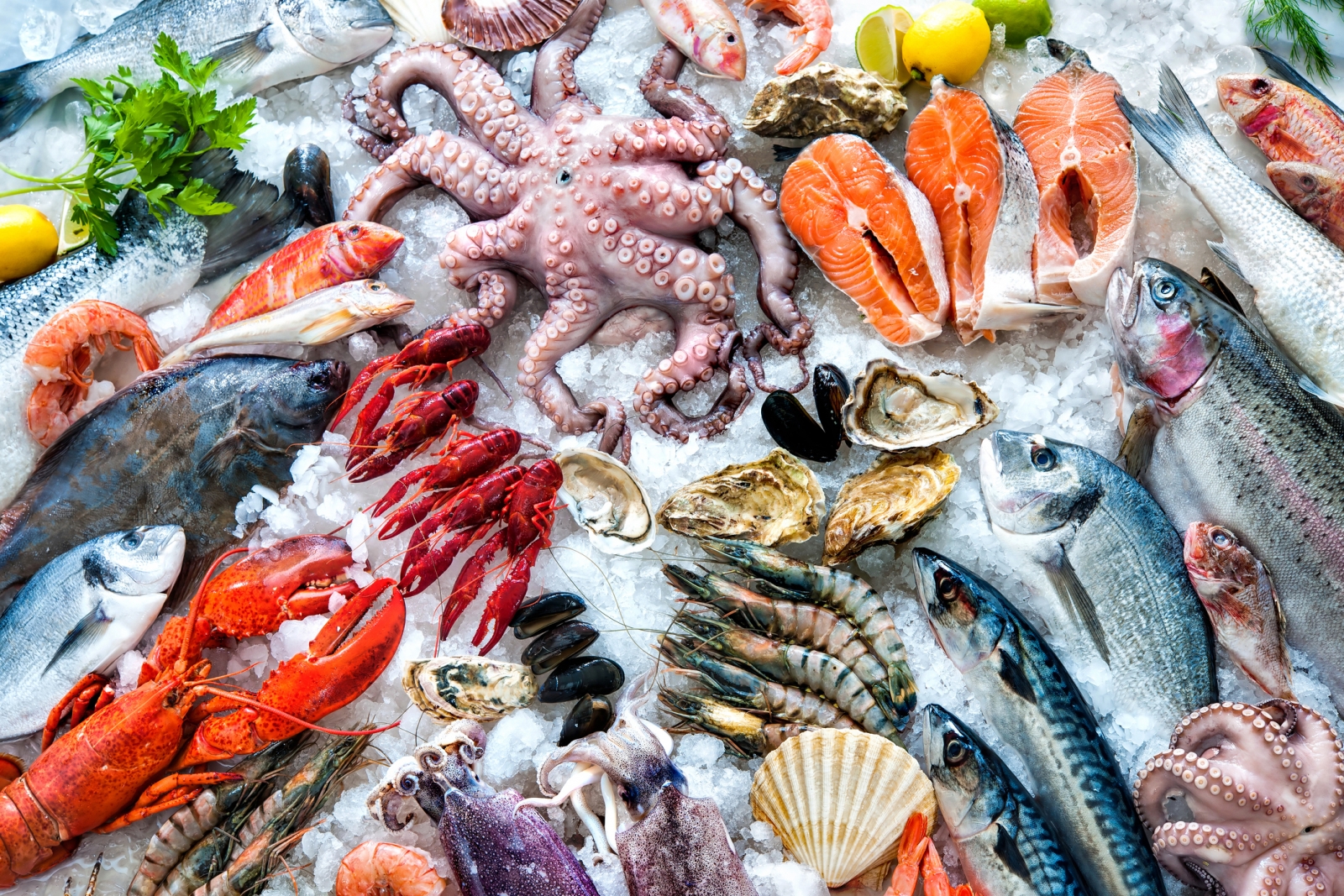 Then there are new traditions being made, like my own family Christmas staple of pierogies; doughy dumplings oozing with potatoes and cheese and draped in caramelized onions, a remnant of my Eastern European heritage.

Rhode Island Holiday cookbooks in the Culinary Arts museum collection showcase a smorgasbord of cultures that came to Rhode Island’s hallowed shores, from Sweden to French Canada to the Caribbean islands. There are recipes for Swedish coffee bread, rosti, pickled herring;Jewish recipes for latkes and applesauce; French-Canadian meat pies; ‘50s convenience concoctions like lime jello salad, and even an odd but endearing gem of cookbook called “Emeril’s Creole Christmas” (BAM!). 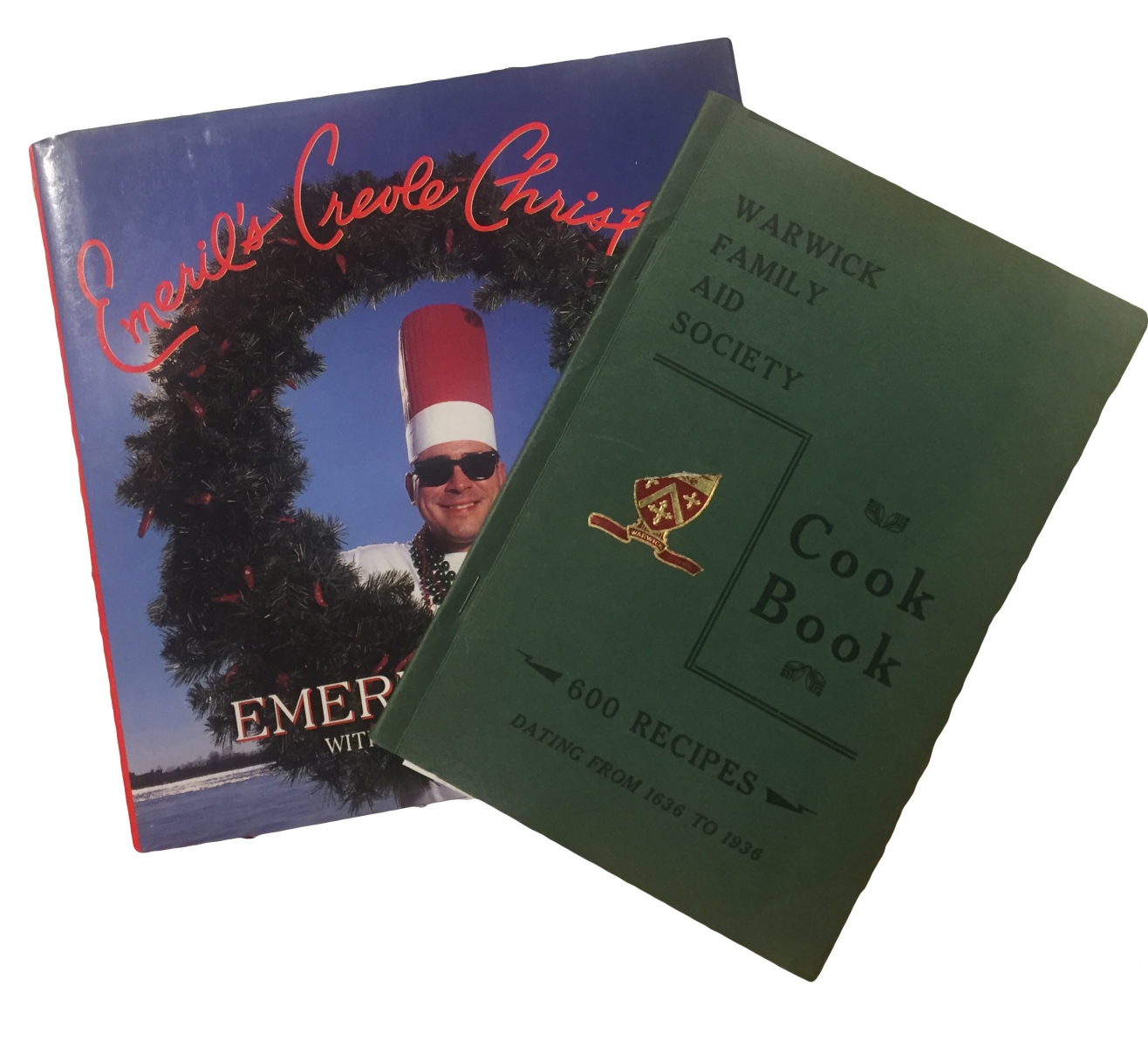 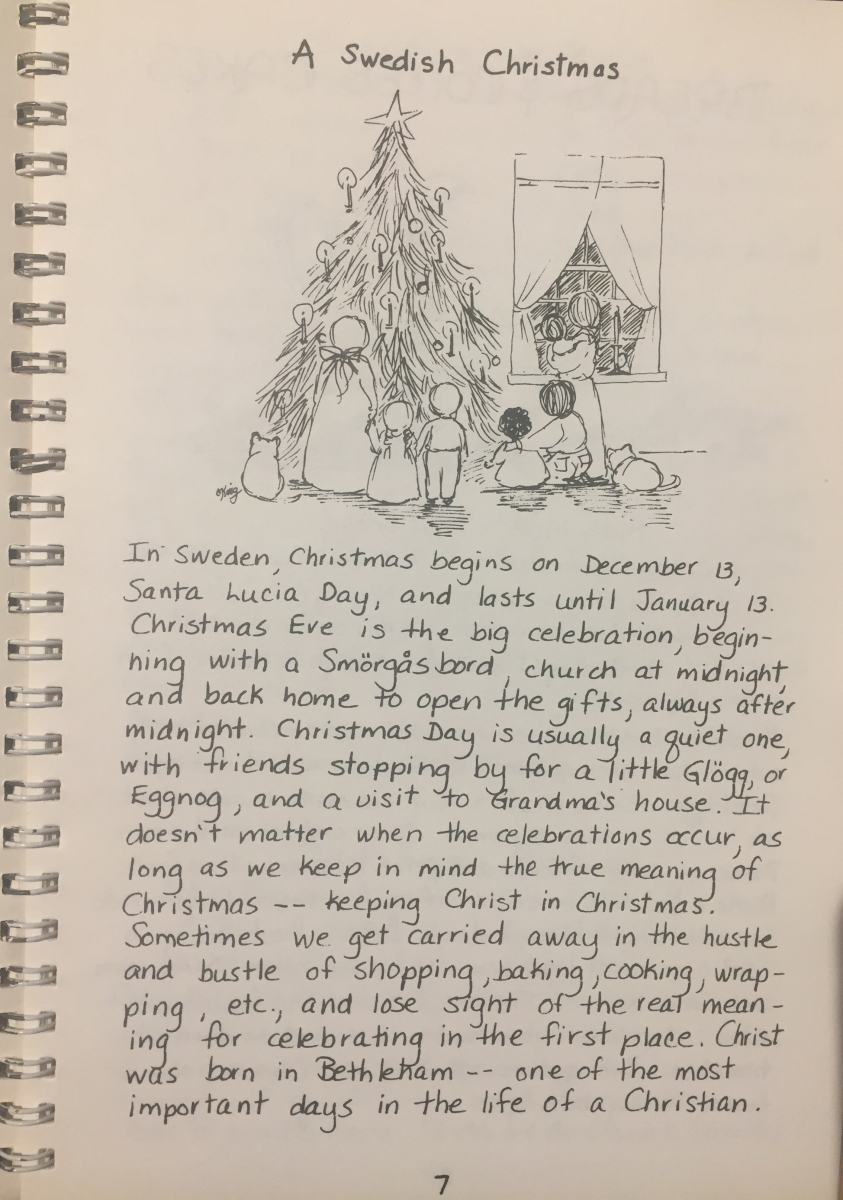 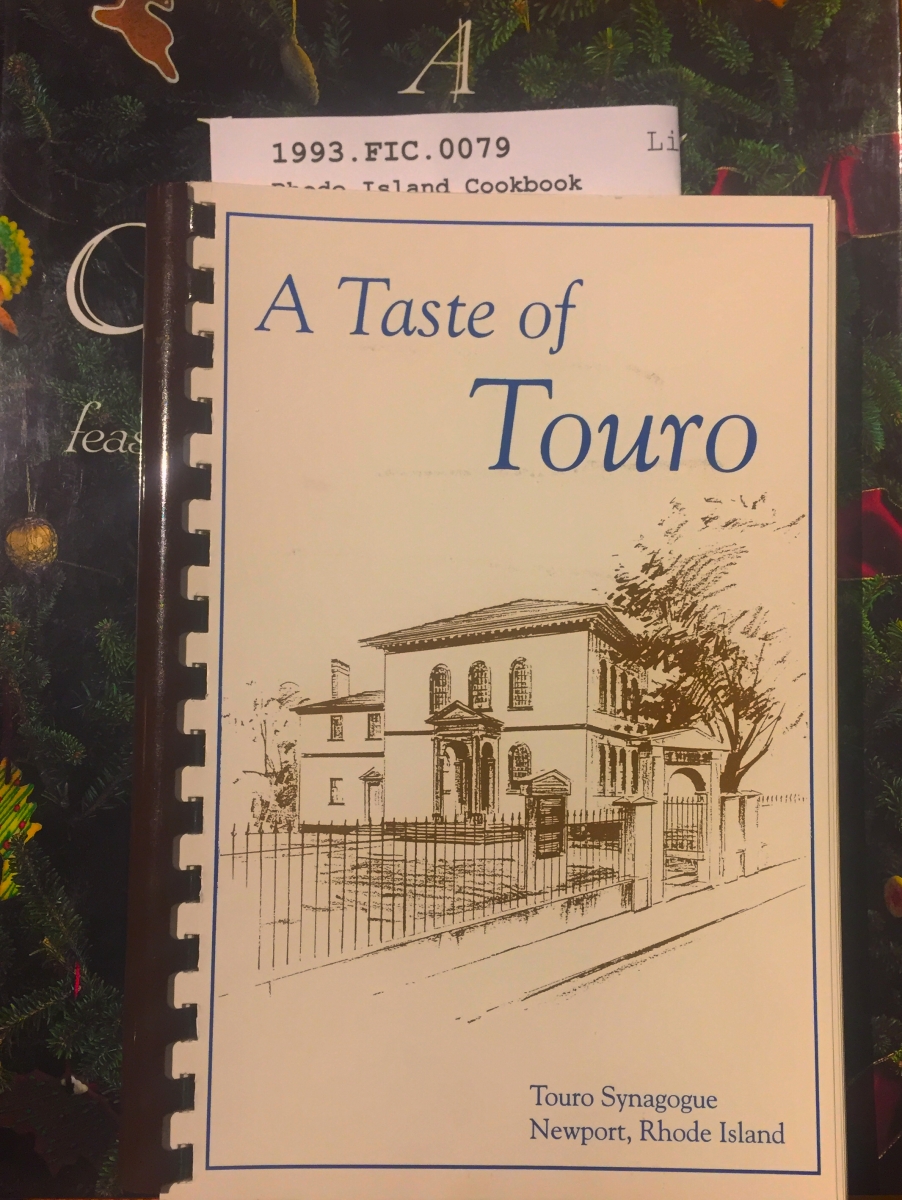 Kelly, an expert in local food history, sees this diversity in meals outside the ‘food sphere,’ in his own life.

“My older daughter went to Classical High School and there were people from all around the world in her friend group; they called themselves the library crew,” he says. “They developed their own little holiday tradition where my daughter would make cookie cake and lasagna because that’s what she learned to make when she was a little girl, another girl would bring jollof rice and someone would bring some sort of jerk chicken from the islands.”

So whether your holiday table is laden with latkes, pierogies, turkey, ham, jollof rice or squid, it’s all quintessentially Rhode Island, part of a time and place where traditions collide and a tasty outcome is produced.