YouTuber Matt Oliveira flew one of his subscribers to Rhode Island to embark on the Most Rhody Day Ever, and here are the results. 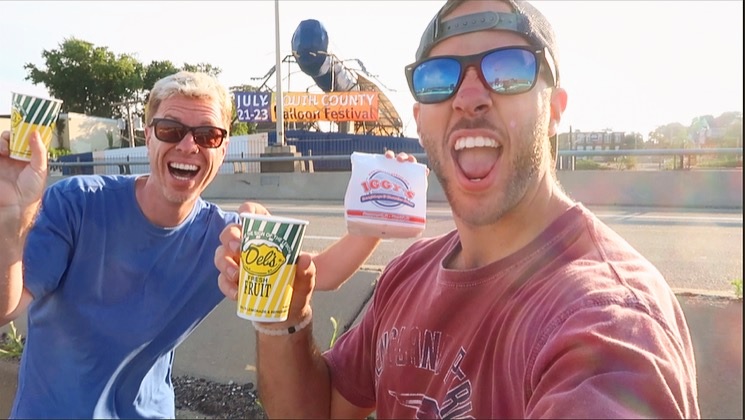 Imagine the most Rhody day ever full of adventures from sunrise to sundown. A non-stop culmination full of epic activities and, of course, lots of food from the top of the state to the bottom… in just one day. That’s just what Matt Oliveira, a twenty-five-year-old flight attendant and YouTuber from Lincoln did. Oliveira recently released a video on his YouTube channel, Molives TV, which features an unreal trip around the smallest state, featuring the most Rhody day ever!

Oliveira ran a giveaway for fans to embark on the Most Rhody Day Ever, filled with classic food staples and landmarks found in Rhode Island. In order to have won the contest, fans had to subscribe to his YouTube channel and upload and tag him in a picture of the most adventurous thing they have done in their entire life on Instagram. Oliveira flew the lucky winner, Gary Vaughn from Atlanta, Georgia, to Rhode Island to set out on this awesome experience.

This whirlwind Most Rhody Day Ever featured a jam-packed itinerary including twelve different stops around Rhode Island. Oliveira and Vaughn watched the sunrise at 5:30 a.m. at Hazard Park in Narraganset and then had a pretty sweet breakfast at Allie’s Donuts. The two then took an early morning ferry to Block Island, where they scootered around to view the different lighthouses and the Mohegan Bluffs. By the time they got back to the mainland, Oliveira and Vaughn ate stuffies off the shell at Champlin’s Seafood in Galilee, followed by clam cakes, doughboys and chowdah at Iggy’s. They used a plunger to catch quahogs, walked the Newport Cliff Walk, had a Mr. Lemon versus Del’s taste test and they even took a selfie with the famous Big Blue Bug! Oliveira also introduced Vaughn to New York System hot wieners and our state’s signature drink, coffee milk.

What would a trip to Rhode Island be without watching a ball game at McCoy Stadium, home of the world’s longest game? Oliveira acquainted Vaughn with sauce pizza and then took Vaughn inside for an evening of baseball and rooting for the home team. To end the night, Oliveira and Vaughn went to a local bar in Narragansett to check one last thing off of their ultimate Rhode Island bucket list: run into someone you know from high school (because we all know you can’t go anywhere in this small state of ours without seeing someone you know).

Seems exhausting right? Well it just goes to show how awesome Rhody is and how much there is to do even in such a small state. It looked as though Gary Vaughn from Atlanta, Georgia, enjoyed his trip to our little state of Rhode Island, thanks to Matt Oliveira, the ultimate “most Rhody day ever” tour guide!

A to Z Guide to Food in Rhode Island

Who Has the Best Clam Cakes in Rhode Island?