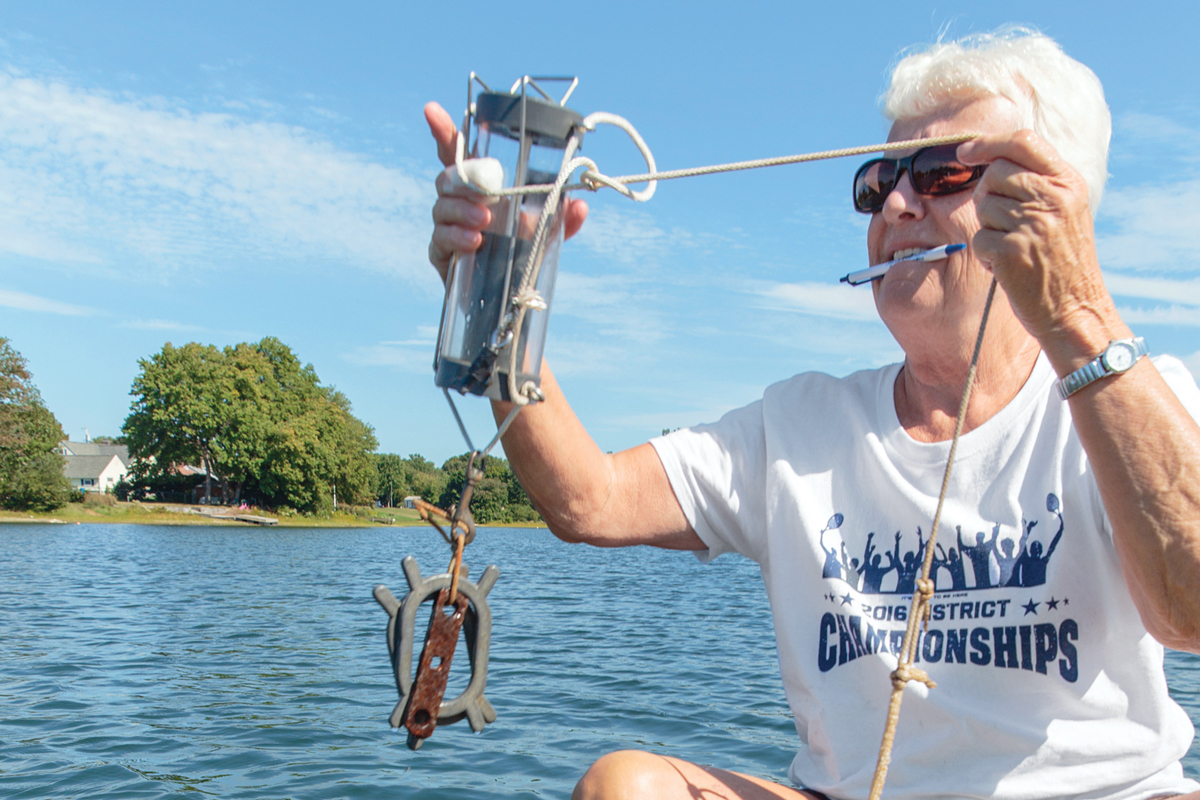 When Betty Law heard that the water quality in the pond behind her house in Warwick was so poor that it was unhealthy to swim in, she attended a public meeting at City Hall to learn more. That’s when Law, now ninety-four, first met neighbor Gisela Meyn, seventy-four, and they decided to do something about it and become volunteer scientists.

They teamed up as volunteer scientists with the Watershed Watch program at the University of Rhode Island (URI) to conduct tests of the water in Little Pond every week from May to October. It’s a project they have now undertaken for twenty-one years in a row, with no plans to stop. They have the distinction of being among the longest-active participants in a program that boasts about 350 volunteers monitoring water quality in more than 250 water bodies in the state each year. Law is the program’s oldest volunteer by far.

“It was a shame that we lived on the pond and couldn’t go in the water,” says Law. “I’m not a great swimmer, but I like to cool off in it.”

The Watershed Watch protocol requires that the pond be monitored at its deepest point, so every week the women row a small boat from the shoreline behind Meyn’s house to the middle of the pond to collect water samples and measure various characteristics of the water.

“Gis treats me like an old lady,” jokes Law. “She helps me into the boat and she rows the boat, but we do the rest together. I still drive, tap dance and sing in the choir at St. Kevin’s, too.”

When they reach the middle of the pond — both barefoot and wearing flowery blouses and colorful shorts — they go to work. To measure water clarity, Law leans over the edge of the boat precariously to lower a black and white patterned device called a secchi disk into the water, then looks through a tube to determine how far below the surface she can still see the disk. At the same time, Meyn measures the water’s temperature and depth, and submerges a complicated instrument to collect water samples at various levels. Law then conducts another secchi disk test to verify her original results.

Twenty minutes after they start, the women row back to Meyn’s house, with Law serving as navigator while Meyn pulls on the oars.

Watershed Watch is one of an increasing number of citizen science projects in Rhode Island that engage volunteer scientists and non-scientists in collaborative efforts to collect data for scientific research. Now in its thirtieth year, the program provides information that is used by water conservation organizations, policy makers, regulators and state and local officials to make decisions that affect the health of the state’s water bodies.

According to Linda Green, who directs the program, Watershed Watch volunteers play a critical role in helping scientists understand the effect that weather and land use have on water quality in the state. The volunteers are the first line of defense against pollutants creeping into local waterways.

“We’re still doing it because it feels like we’re doing something worthwhile,” says Meyn, a retired nurse at Roger Williams Hospital. “Our results have always come up positive; the bacteria count has never been high. It’s reassuring to know that the pond has been fine all of these years.”

“Citizen science” is a relatively new term, but engaging volunteers in science-based research projects isn’t new. Some experts suggest that Benjamin Franklin and others in his day were among the first citizen scientists, since few people were trained scientists at the time. The National Audubon Society’s annual Christmas Bird Count, which got its start in 1900 and now uses 72,000 volunteers each year to tally birdlife, may be the longest-running citizen science project in the nation. And weather watchers around the country have been contributing local weather observations to scientists for decades.

But it has only been recently that citizen science has grown dramatically in popularity and stature, gaining legitimacy among scientists and government agencies. The White House Office of Science and Technology Policy recently encouraged federal agencies to develop research projects that engage the public in collecting data, and it established a website (citizenscience.gov) that aims to help the agencies “accelerate innovation through public participation.”

According to Darlene Cavalier, a professor at Arizona State University and founder of SciStarter, a website that links scientists with volunteers, most of the science-based federal agencies now sponsor citizen science projects, including NASA, the Environmental Protection Agency, the National Institutes of Health, and the United States Geological Survey. A law was even recently passed in Congress to “harness the expertise, ingenuity and creativity of all people to contribute to innovation in the United States and to help solve problems or scientific questions by encouraging and increasing the use of crowdsourcing and citizen science methods within the federal government.” The legislation aims to resolve any lingering doubts government agencies may have about the value of citizen science.

Cavalier says there are still barriers to the full participation of the public in science research, but things are improving.

“Not long ago only scientists in laboratories had access to the equipment required to do these kinds of projects,” she says. “But now the public is getting access to low-cost versions of sensors and other equipment, and more and more it’s getting easier to access the data as well, though it’s still not easy to interpret and translate the data.”