Turns out, toddlers don't really tiptoe through the tulips. They storm and pillage.

Last year, the farm saw swells in the thousands over the course of a three-week run, from April 20 to May 13. At the tail end of the 2017 season, my cousin (a.k.a. Auntie Abi) and I brought my daughter, Willa, who was one and a half at the time, to the farm for tulip picking. We left the stroller behind — I saw another mom finagling hers along the bumpy dirt rows; she eventually abandoned it by the entrance — and set out in the gray afternoon. The shock of color against the dreary backdrop was truly breathtaking, as is the scenery all around. Snake Den Farm, where Wicked Tulips is sited, is a state-owned stretch of farmland in Johnston and North Scituate and it’s home to six other farm leases.

We’ll go again this year, and at two and a half, Willa is peak toddler. I don’t want to make it sound like it’s not fun. It’s super fun, I swear. But just like anything else, tulip-picking with toddler takes some flexibility, preparation and dirt-low expectations. Here’s what I learned from the first go-around:

Book tickets for a weekday. We went on a Thursday after work last year, and we often had whole tulip rows to ourselves.

Don’t even try to chase the kid. I learned this the hard way. The more you chase, the faster she runs down the row, risking a face plant into a crop of perfectly poised tulips. It’d be funny, sure. But it’d also be expensive, should any tulips be plucked in the process. The farm operates on a “you pick it, you buy it” policy.


Enlist someone who loves your kid enough to find it funny, but not enough to also scold him/her in public. All hail Auntie Abi. She lugged Willa around on her hip, coaxed her out to less-populated rows and watched her roam while I hungrily snatched the loveliest tulips I could find. She also left the nagging to me, so there weren’t two people reminding the free-range toddler to be kind to the flowers. Here, Auntie Abi laughs as Willa breaks a tulip mid-gallop (we picked it; we bought it): Give your kid something to hold to prevent grabby hands. I had a mind to bring a tiny basket for her. Alas, Mama forgot. Next time. I also tried to implement the “hands in pockets” rule, and that worked for about a second. Eventually, Willa found some rocks to carry around. Toddler brains are awesome. 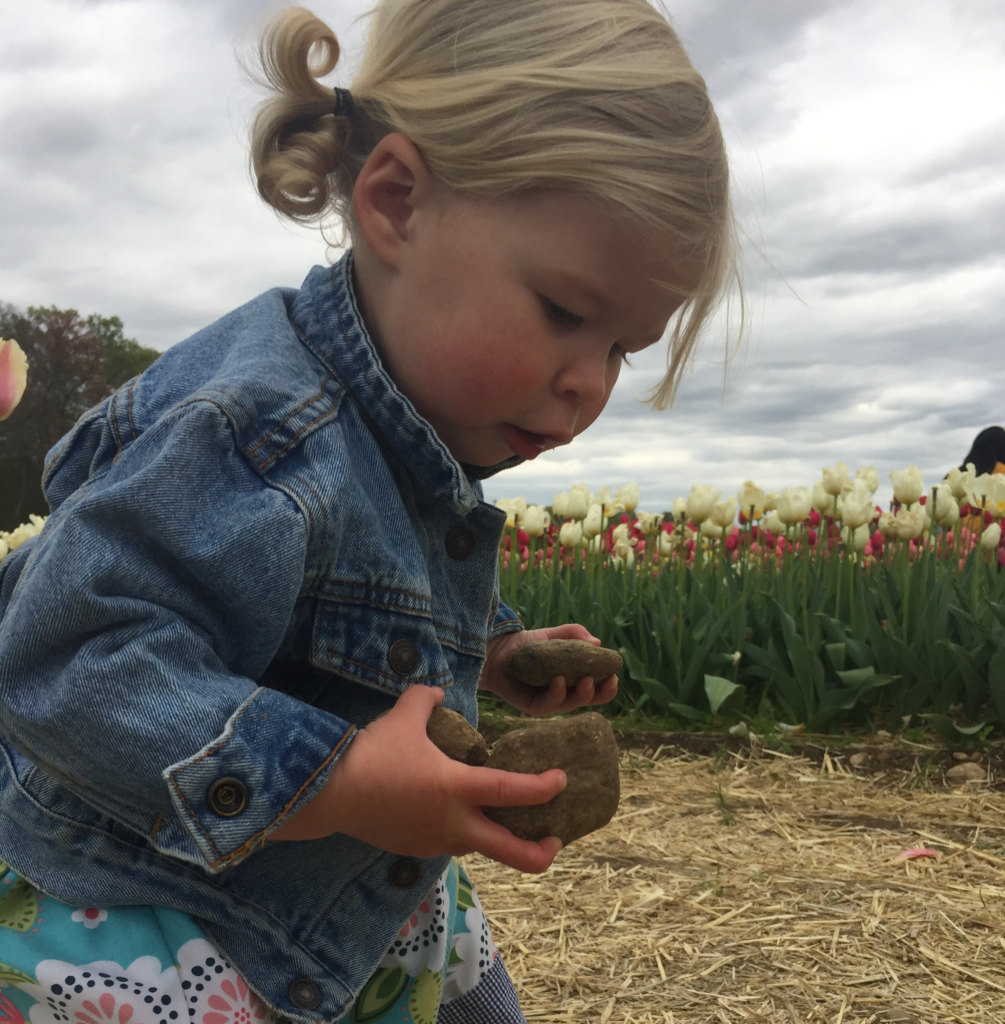 Keep your photography expectations low. I got more photos of my daughter running away from me than standing still. But I did get her to sit, somewhat begrudgingly, next to this sweet pair of Danish clogs. 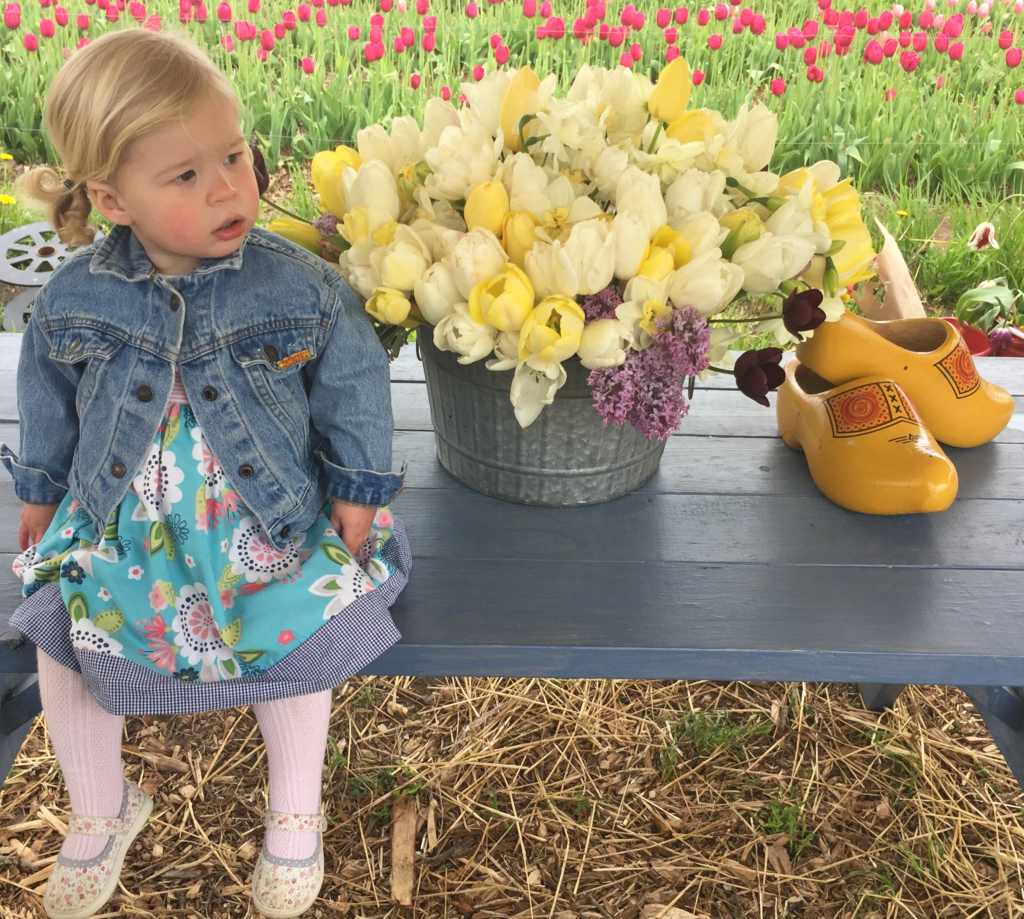 Keep your tulip-picking expectations low. I got out of there with nine whole tulips and one broken one, in about an hour. But we got our steps in. Fun fact: My colleague, Jamie Coelho, learned during her own Wicked Tulips excursion that you should pick the flower at base of the stem, nearly uprooting it. 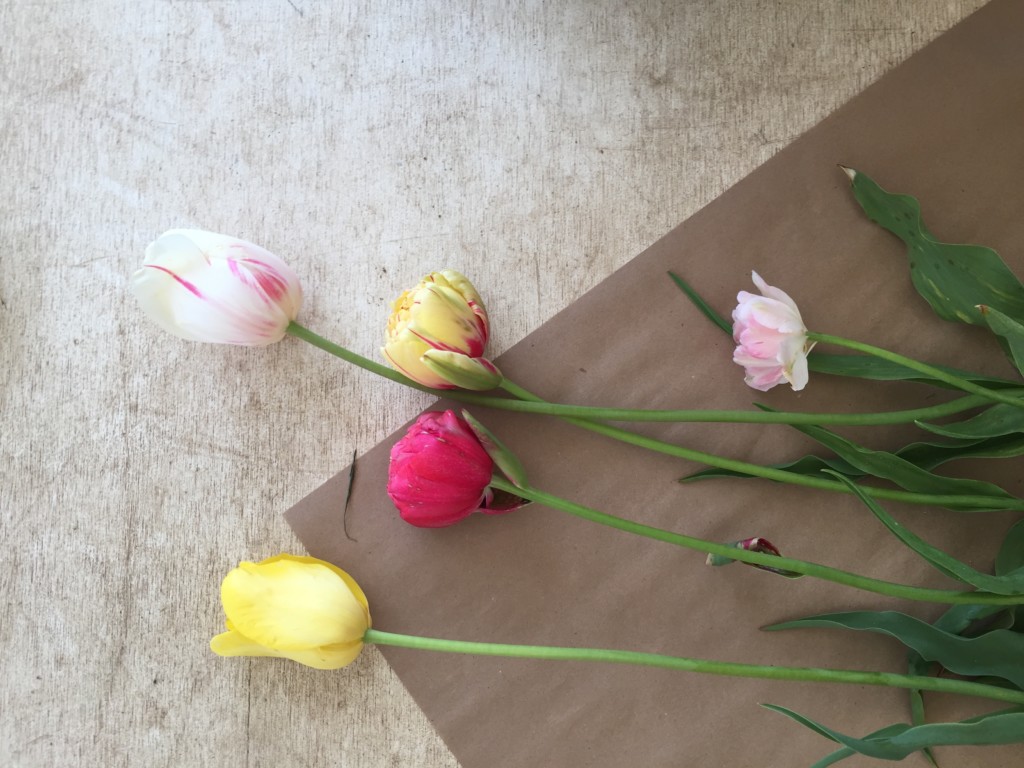 Stick to the outskirts. When the periphery growing fields shut down towards the end of the season, some land opens up for picnicking and roaming. We spent most of our visit running by an old barn. I’d chase Willa then look up and remember I was in a tulip field. Pretty dreamy.

Pack snacks. Make the admission fee worth your while and pack a picnic lunch or some snacks.

It helps if your kid looks really, really cute. Some tulip pickers are way into it. They dress up; they bring fancy baskets; they bust out expensive cameras. Your kid will photobomb a young woman as she poses for that perfect Instagram shot. It’s unavoidable. But if she looks cute, then you’re more likely to get a dismissive smile than a dismissive frown. And on to the next photobomb.

Proprietors Jeroen and Keriann Koeman — who have a brand new baby of their own — are releasing tickets on the website in two-week increments, as the flowers bloomed a bit late this year and the duration of the growing season is difficult to predict. Weekend tickets, which are $17 for adults and include ten you-pick tulips, are already sold out for the next two weeks. Weekday tickets are $5 for adults, with $1 for each you-pick tulip, and there’s decent ticketing availability mid-week. Youth are always $3 and kids three and younger are free. The farm is closed on Mondays. Visit wickedtulips.com to buy tickets for this year’s event.

RELATED ARTICLES
The Scoop on Wicked Tulips
Behind the Scenes: A Hollywood Producer’s Lush Newport Garden
5 Farms for Pick-Your-Own Strawberries