The Providence Performing Arts Center was built in 1928 and still remains the jewel box of the city. But did you know it was almost turned into a parking lot during the recession in the late-1970s? 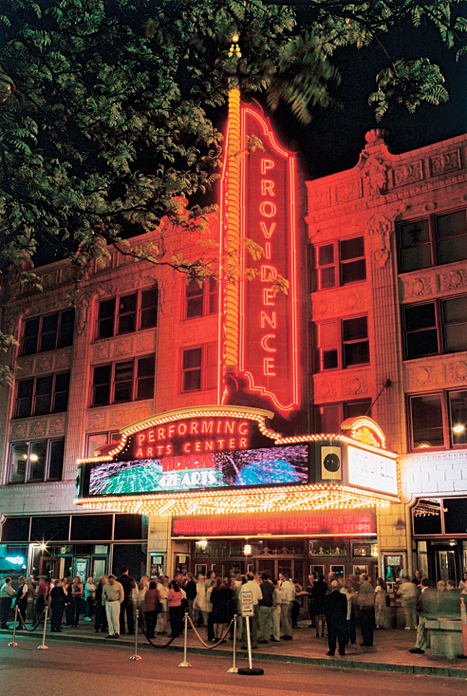 Rhode Island Monthly is celebrating twenty-five years. We’ve changed a lot since 1988 (while you're here, check out our new website), and in some cases, so has the rest of the state. For #ThrowbackThursday, we’ll take a weekly dip into the archives to show off an image that has appeared in a past issue of Rhode Island Monthly. We’ll see what’s changed a lot and what really hasn’t changed all that much.

The Providence Performing Arts Center was built in 1928 and still remains the jewel box of the city. But did you know it was almost turned into a parking lot during the recession in the late-1970s? Thank goodness it was saved by a nearly $1 million renovation that brought back the splendor of the gold leaf fleur-de-lis, starbursts and scrolls accented by red and blue paint. The marquee is relatively new having been installed in 2000. In our December 2001 issue, Rhode Island Monthly highlighted the behind-the-scenes work that goes into making musicals and concerts happen. Audience members are never aware of all the activity going on backstage, but these are the people who help ensure each show is so spectacular.

Sometimes while watching a performance and listening to the music, I’ll allow my eyes to drift from the stage to take in the majesty of the incredible theater. Everyone should get the chance to experience PPAC at least once in their lifetime. But sometimes the cost of the shows might prevent one from doing so. Our annual Best of Rhode Island party, held at PPAC, benefits a charity called Learn it to Earn it, which allows underprivileged schoolchildren – who may never have the chance otherwise – to go see a show at the theater. PPAC has also been making efforts to release a limited amount of more affordable tickets.

Wicked (read our review) is at PPAC through January 12, and PPAC is offering lottery tickets to audience members. Go to the theater two-and-a-half hours before showtime, and you will be entered in a lottery to have your name drawn for a limited number of orchestra seats at $25 each, cash only. This lottery is available only in-person at the box office, with a limit of two tickets per person. Lottery participants must have a valid photo ID when submitting their entry form and, if chosen, when purchasing tickets.

Wicked is onstage at the Providence Performing Arts Center, 220 Weybosset St., Providence, through Jan. 12. Tickets are $53­–$153; a limited pool of $25 tickets may be purchased at the box office two-and-a-half hours before each performance. Call 401-421-2787 or visit ppacri.org for more information. Want to share your memories with us ? Tell us in 140 characters or less on Twitter using hashtag #401Love or pin to our open Pinterest board, 401Love: Rhode Island Memories.