While the stars were aligned for To Kill a Mockingbird to hit the stage, the theater's production was, with a few exceptions, a tad less celestially blessed.

While the stars were aligned for To Kill a Mockingbird to hit the stage, the theater's production was, with a few exceptions, a tad less celestially blessed.

With its treasured characters and revelation of the seedy undercurrent of American history, the story of To Kill a Mockingbird speaks for itself. The year is 1935, the place is Maycomb, Alabama. Local lawyer Atticus Finch defends African-American Tom Robinson from a false accusation of rape. The story is told through the eyes and actions of his children, Scout and Jem, along with their friend, Dill. Their innocence brings the injustice at hand into sharper focus, their naivety and “from the mouth of babes” demeanor unpeeling the shrouds that adults often throw over complex situations. In the end, while you would love justice to prevail, injustice wins and the children seem to grow a little through the plot, more aware of the strange ways of adults.

In Trinity Rep’s rendition of this classic tale, Stephen Thorne is, as usual, brilliant. Thorne, with his slight physique and rather ubiquitous face, was a surprisingly convincing Atticus Finch, who in my mind had always looked like Gregory Peck. Thorne wore round rimmed glasses and a creamy suit, making him eerily similar to Peck’s formidable portrayal of the beloved lawyer. 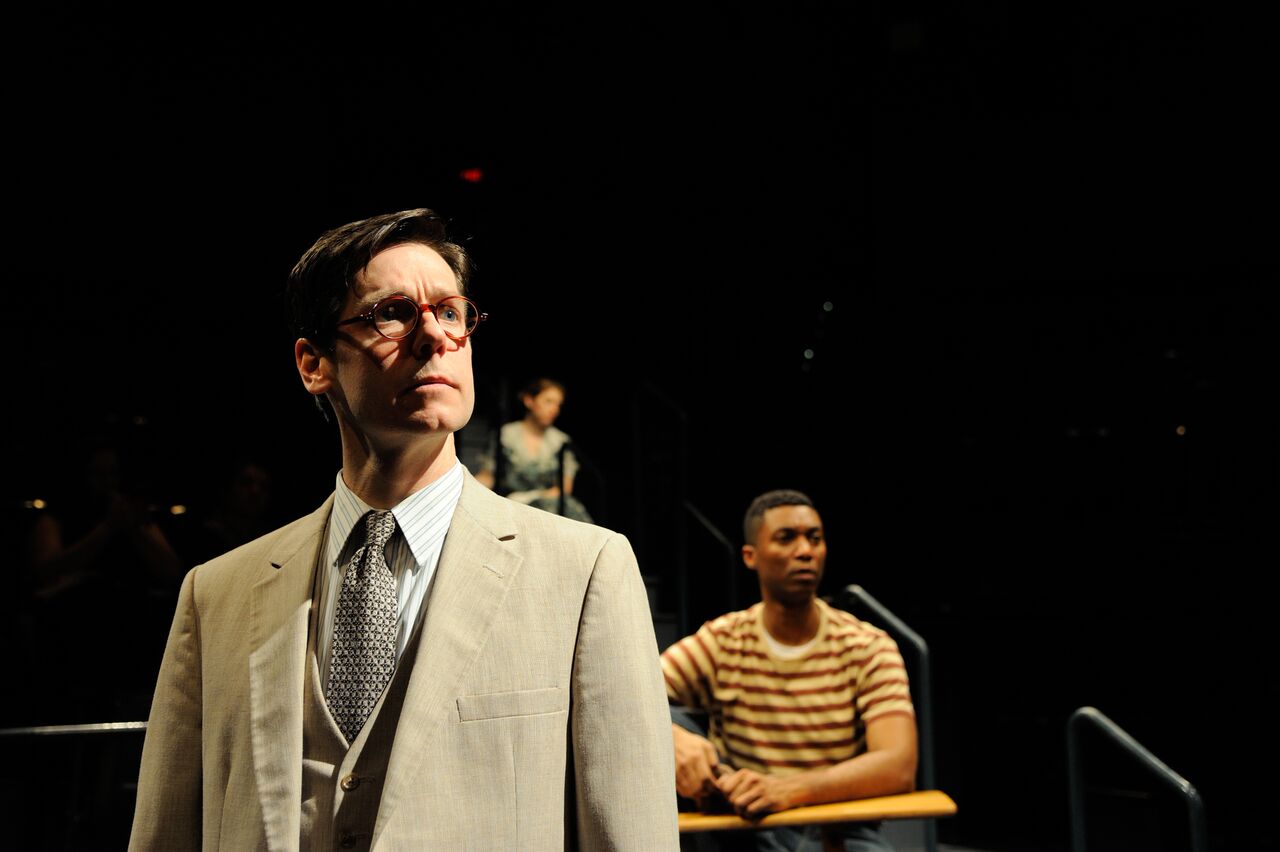 Thorne also has the talent of making you feel what he feels, see what he sees. On the hot Alabama summer day in the steamy courtroom, he takes off his blazer and mops his brow. The simple gesture could be easily missed, but with Thorne, this tiny detail made me feel like I was perspiring in a Southern heat wave as well.

The entire trial scene was gripping, the tension like the pluck of a sour note on a violin vibrating through the audience. We were the audience in the courtroom, watching a sad event unfold with no power to aid the sweating Atticus or the innocent Tom Robinson.

Like Scout, Jem and Dill, the audience watched from the rafters like birds watching an accident from a telephone wire.

These poignant moments, inherent to the very plot of To Kill a Mockingbird, were beautifully portrayed.

But in other moments, it was as if Trinity Rep was trying too hard to emphasize what was wrong in the courtroom, what was, and is, still wrong with society. Instead of relying on the story, the talent of their actors and the silence that speaks louder than words, they chose to interject the actor’s personal encounters of, well, I’m not sure exactly what. Not racism, entirely, though some of the personal tales demonstrated that this dark mark on the heart of man still exists, but in keeping with trend-words of today, intolerance. 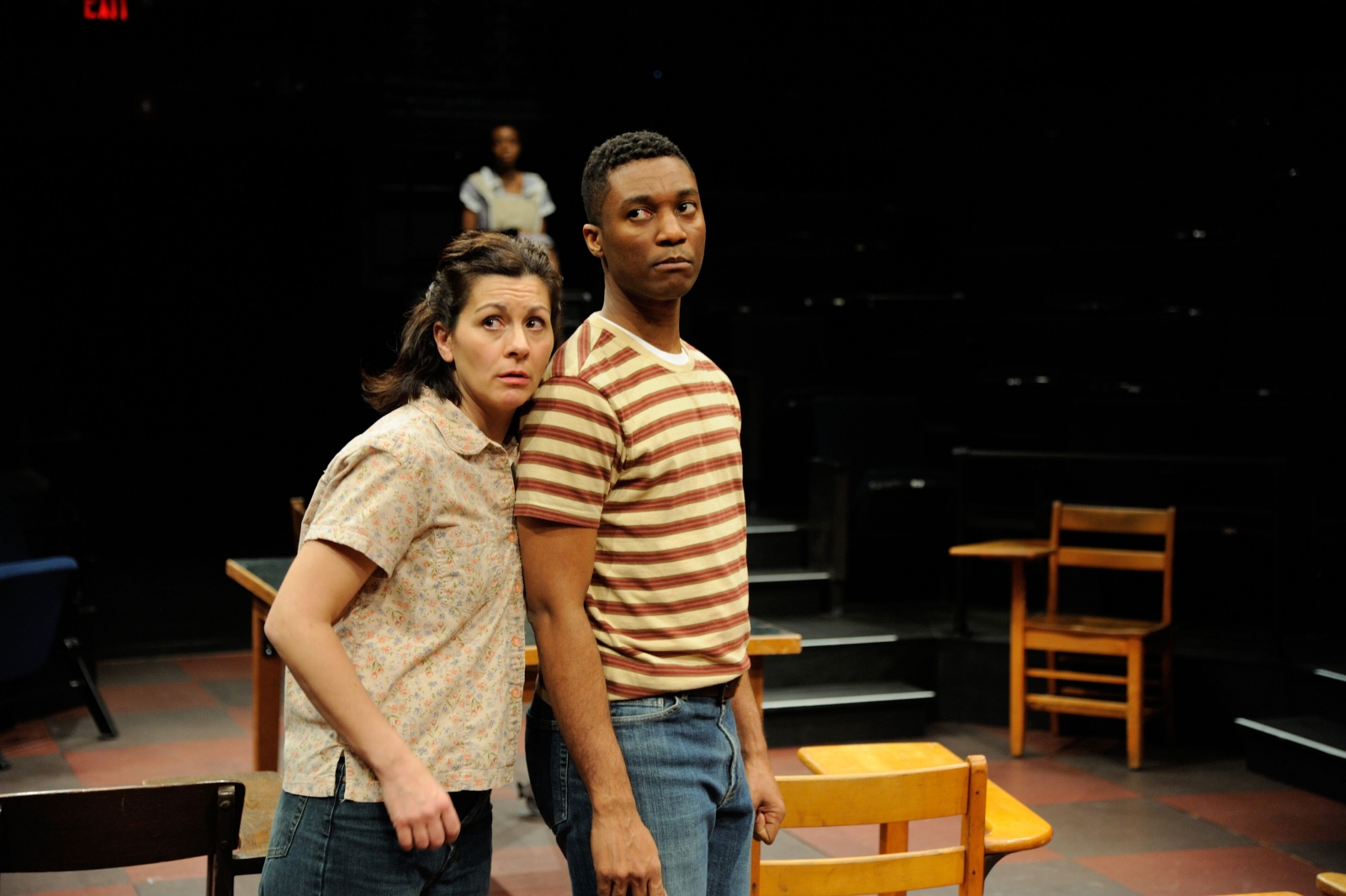 We hear one actress talk about her ex-boyfriend who broke up with her because he didn’t want to take her virginity. Another talks about his experience discovering he is gay and the reaction of his immigrant parents. Thorne tells of how, in college, a man had feelings for him, but he did not feel the same and he still feels guilty about his reaction.

While these stories are commendable, when the fourth wall was broken, so too was the flow of the performance. Spunky Scout became a grown woman, sporty Jem an aspiring actor, and Dill a middle-aged man with a questionable sense of style. The magic of the story, the innocence of the children, the hot summer days and fearful night of Scout and Jem’s assault, were dulled.

They became a distant memory written in a book, merely characters that the actors slipped on and slipped off.

Trinity Repertory Company’s To Kill a Mockingbird is onstage now through April 3. Tickets range from $35 to $71. For more information, call 401-351-4242 or visit trinityrep.com.