Like to laugh until your side hurts? Raunchy humor give you all the feels? Boy, have we got a show for you. 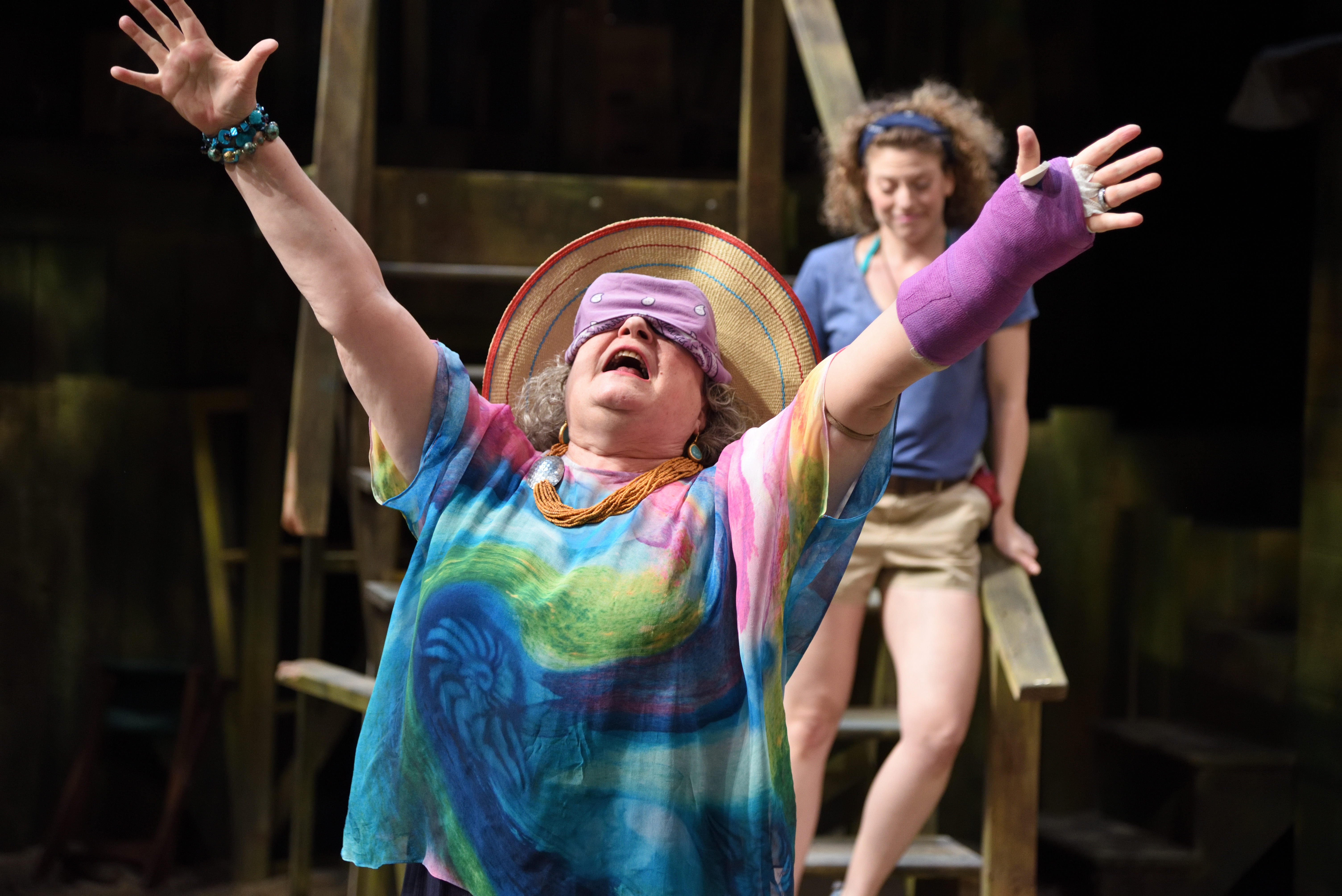 Ann Scurria as Marion provokes laughs throughout the show.

“What a challenging performance! So topical, controversial…. so… interesting.”

Do you really enjoy that show that “challenges” you? Maybe you do, maybe you don’t—but who doesn’t love a good laugh?

Faithful Cheaters, Trinity Rep’s latest show, is chock-full of humor, and not of the highbrow variety. Sophistication, subtle satire and incisive witticisms are all thrown out the window for hilarious effect. German threesomes, spineless men waddling around in constrictive pants and hotels named after anatomical bits: Nothing is off limits. This is farce at its best — bear suits, pot brownies, off-color jokes and all.

I know it sounds lewd and rude, and it absolutely is, but there’s purity in this kind of theater that has been largely forgotten. From the ancient Greeks to the venerable Bard himself, crudity has been the linchpin of comedy for millennia. It’s about time we brought it back (lest we forget that much of Shakespeare’s humor relies on the consistently comical phallus).

The play opens at the lakeside cabins of Sonoma, whose primary inhabitants are a sizable family of belligerent raccoons and a loincloth-clad man named Phil, played by the delightfully dimwitted (when in character at least) Mauro Hantman. The not-so-happily married couple of Theo Klein (Stephen Thorne) and Poppy Stevens (Rebecca Gibel) have decided to buy the crumbling dump, and they’ve brought along Poppy’s mamas to try to convince them to help make their dream a reality. 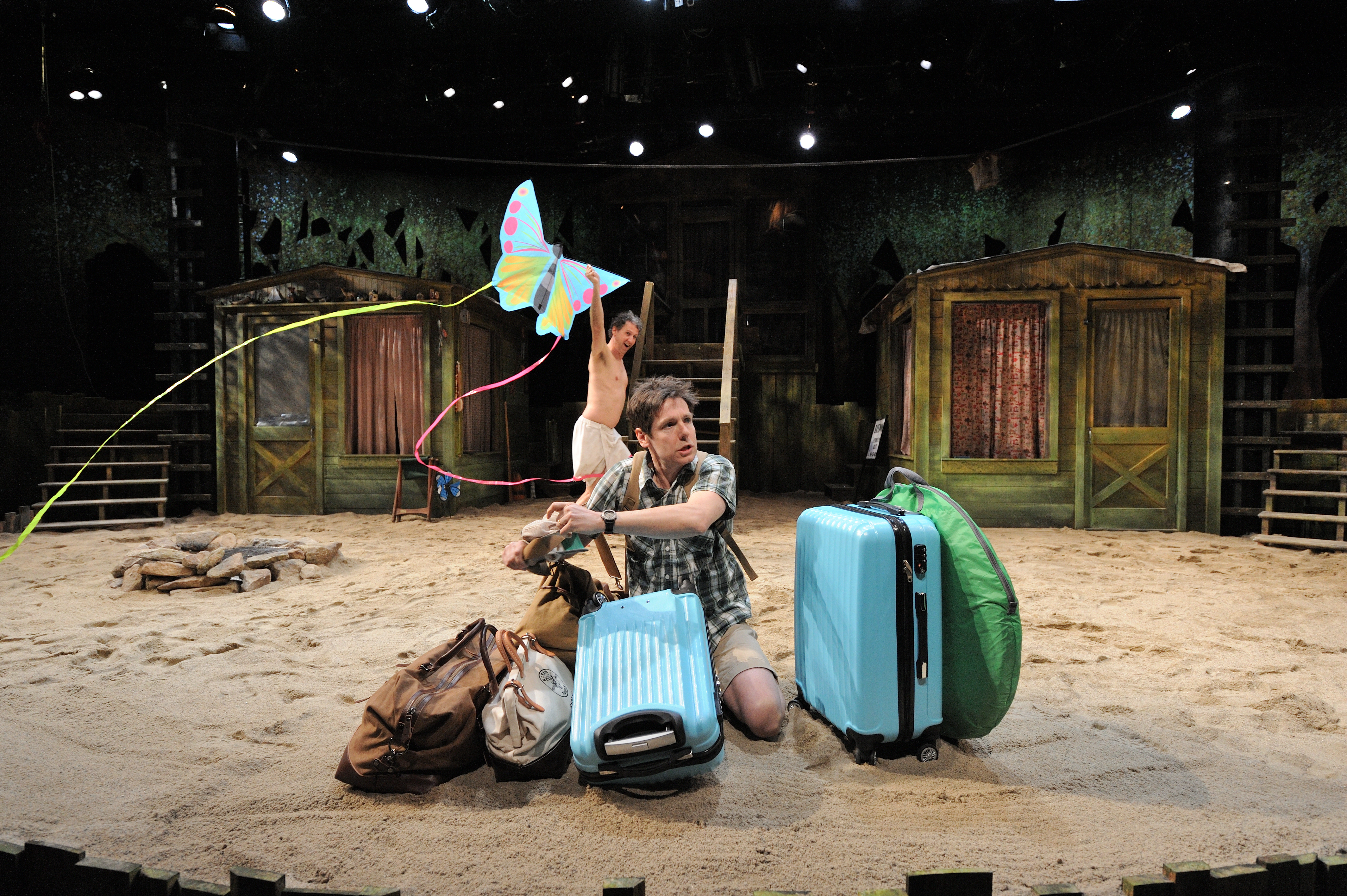 Stephen Thorne as Theo and Mauro Hantman as Phil.

In the first few minutes, Marion Stevens (Anne Scurria), Poppy’s wholesome-seeming mother, begins sweetly jabbering about a kinky game of “dirty hostages” she learned about. Right from the get-go, it is pretty clear this isn’t going to be a night of sophisticated laughs. Several rows behind me, I think I hear a troop of tail coated gentlemen gathering their top hats in disgust and angrily twirling their mustaches as they leave. So be it, you poor souls; enjoy your avant-garde theater and performance art — brooding themes, eerie soundscapes and all.

But even with the slapstick humor, in Faithful Cheaters, there’s a lot more going on than meets the eye. Blonde and blue-eyed Poppy isn’t as innocent as she seems (Are blondes ever?). She makes a confession to her mothers: She had a one-night affair with Butsy Benini, Jr. (Charlie Thurston), Sonoma’s realtor. 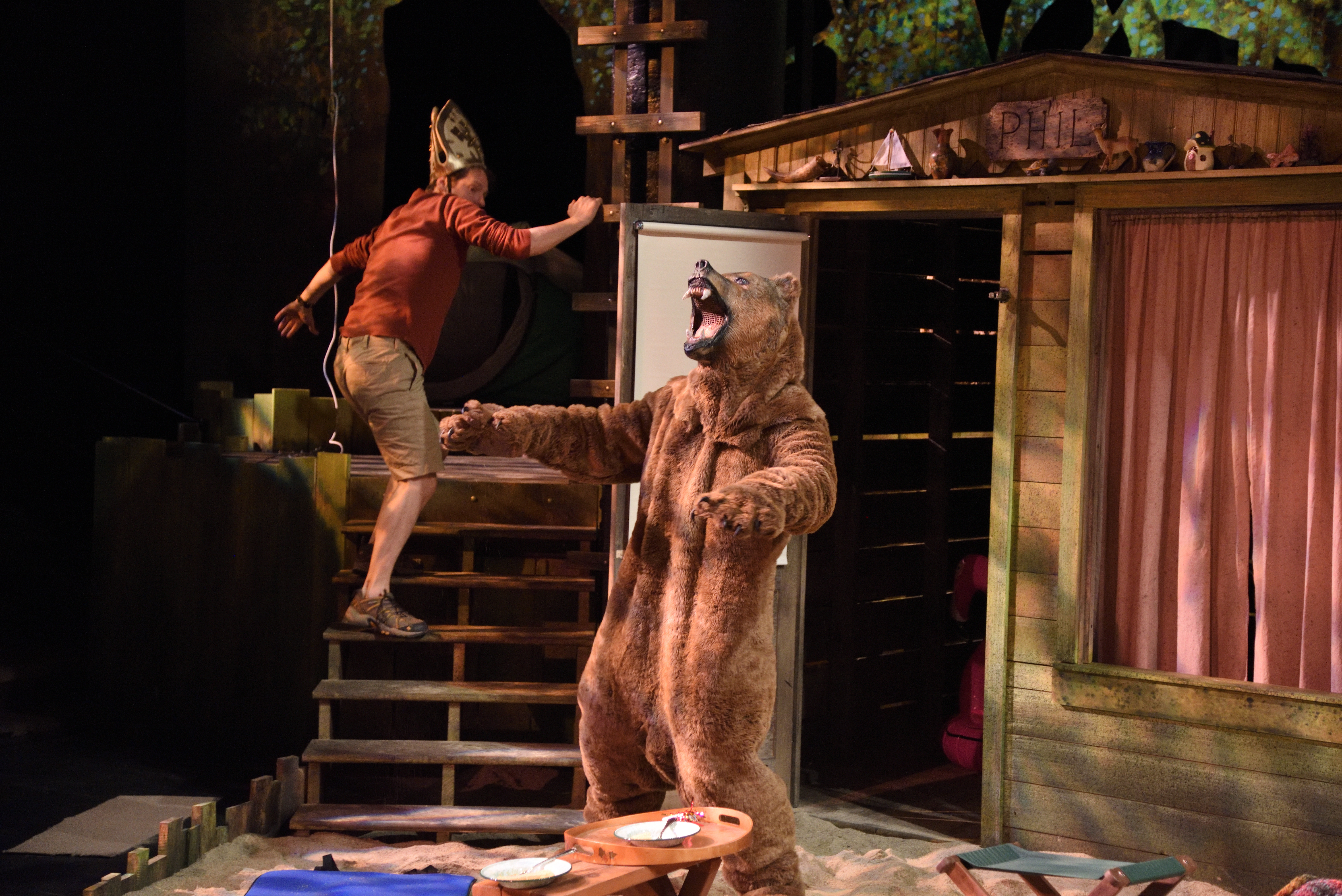 Before the audience can really start feeling bad for her unwitting husband Theo, he admits to Marion that he has taken fifty thousand dollars from the couple’s savings account.

Theo and Poppy spend the rest of the play trying to keep their betrayals from each other, but the arrival of Butsy at Sonoma, an improbable vial of nose spray that can supposedly cure infidelity, and big-mouthed Phil and Marion threaten to spoil the couple’s secrets.

It’s all as absurd, raunchy and as hilarious as you can imagine. I’ve never really considered myself a fan of raunchy humor, but the delivery and nuanced performance made potentially offensive humor offbeat and chuckle-worthy at the very least. Scurria may have been the highlight of the show: She played Marion perfectly, balancing the character’s matronly innocence with her rapacious sexuality. Hantman did a laudable job playing the vagrant pseudo-yogi Phil, whose childlike philosophizing, consistent misunderstandings and minor superpowers were consistently snort-inducing.

The characters make the show a nonstop laugh fest, but it in the end, it fell short in providing a deeper, more meaningful experience. Rather than interweaving moments of thematic seriousness throughout the rest of the show’s levity, playwright Deborah Salem Smith waits until very end to address the true gravity of infidelity. This approach felt incomplete, almost like an afterthought. But for some, the sudden unexpected shift in mood may heighten the potency of ending.

At the play’s conclusion, as Theo and Poppy discover each other’s betrayals, they consider what their future holds. In these last few minutes, there are no laughs. There’s little dialogue at all, mostly just poignant silence. Behind the comedy, we are seeing something serious: pain, disillusionment and fear. There’s depth beneath the characters’ cliché veneers.

The sun sets over the lake in the final moments. The dying light of day becomes the dark uncertainty of night, and the audience is left wondering whether there is room to forgive.