The Worst Snowstorm of All Time

It was a snowy February, though nothing compared to the winter of '78 – but what about the Great Snow of 1717?

It snowed and snowed and snowed again, in February 1717, from Boston to New York, till the drifts rose to second-floor windows, and single-story homes simply vanished beneath endless fields of white. The tale of the Great Snow, complete with "incidents and anecdotes, amusing and pathetic," can be found in an 1891 report on the Historic Storms of New England, by Sidney Perley, posted online. I first heard about the Great Snow from Susan Genett, a meteorologist based in Newport. Genett makes her living preparing forecasts for yachtsmen around the world, but came across the 1717 storm while looking for climate records to help out some local farmers. "There wasn't really much weather data kept back then," she says. "Thermometers weren't even invented yet, and barometers were just starting to be used on ships." So what we know about 18th-century weather depends mainly on random accounts from newspapers and letters. 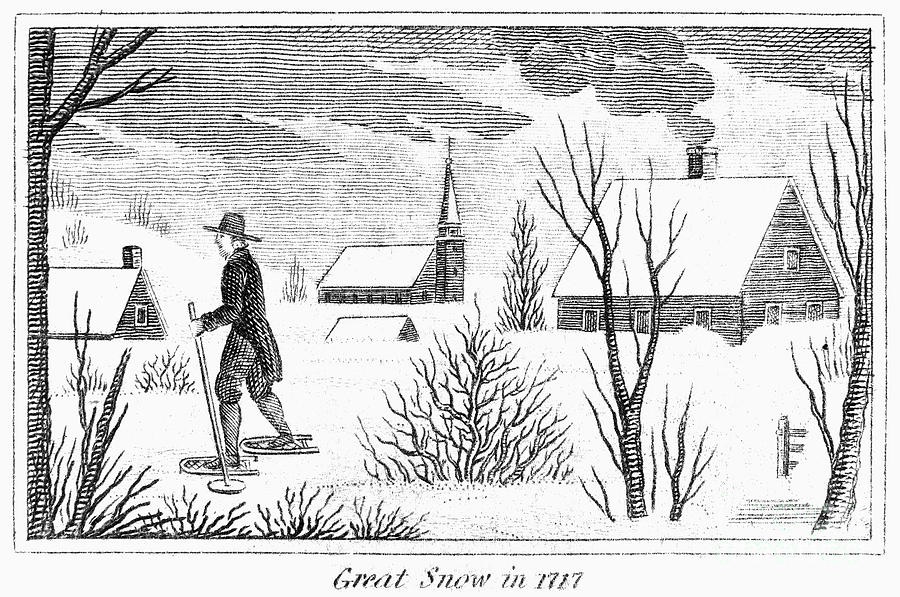 The 1717 snow buried the forests ten to fifteen feet deep, with drifts up to twenty feet high, according to Perley. Flocks of sheep and cattle stood their ground till they were smothered or starved to death. A widow and her three children, in a small house in Medford, Massachusetts, were dug out by neighbors several days after the storm, after they spied her chimney smoke "issuing from a snowbank." Up to 95 percent of the deer, an important source of meat for the populace, were dead by the time it was over. Even the oldest Narragansetts, keepers of local lore extending eons into the past, said they had never heard of such a storm. On Sunday, Feb. 24, "the storm was so fierce, and the snow came in such quantities, that no religious meetings were held throughout New England," Perley says. The post roads were lost beneath the snowpack well into March.

I suppose it's inevitable that we've forgotten the Great Snow. None of us were there to see it; and there are no photos, and no videos on YouTube, to remind us. No school buses were stuck in it, and running out of road salt wasn't a problem, since there were no snowplows, and no cars. People couldn't do much about it, other than hunker down and wait for Spring. And come to think of it, here in the 21st century, despite our weather satellites, freeways and four-wheel drive, that's still our best strategy.

Info on the above image, available for purchase as a print from fineartamerica.com.