We caught up with Helene Miller, Officer of Play for the Partnership for Providence Parks and curator of the “Unicorns in Residence: Providence” public art project, to dispel some of the mystery surrounding these curious pink creatures, currently housed inside the Providence Public Library.

How did “Unicorns in Residence” come to be?

It really started as street art project in New York City. This was in 2010. At first, the artist [Camomile Hixon] and scores of volunteers put “Missing Unicorn” flyers all over the city, and people would call a hotline on the flyer and leave voicemails. The search in New York went viral. Even mounted police in Central Park played along, with “Missing Unicorn” flyers affixed to their saddlebags. We started with the flyers, then we eventually placed two large-scale unicorns in Central Park.

This is a way for folks to use their imagination and pretend they see unicorns roaming around the city, right?

Exactly. The artist went on to travel to 120 different places all over the world and put flyers there. The hotline saw thousands and thousands of calls over time, with messages running the gamut, from the very philosophical and spiritual to the more whimsical. The public takes on the unicorn as its own.

How did the project come to Providence?

While I was living here, Camomile did a unicorn installation at the Lyman Allyn [Art Museum] in New London. I went to see it thinking that this is a great progression of her artistry. With my curator hat, I went to her and asked: What if we took the street flyers and the indoor installation — called the Unicorn Stampede — as well as the idea for galloping or outdoor unicorns a step further and made it happen all at once? And, boy, do I have a city for you! “Unicorns in Residence: Providence” has been a good two years in the making.

Where can people can see the unicorn installation in Providence?

The Unicorn Stampede was up at the Providence Public Library as of yesterday. It’s two groups of these beautiful seven-foot, pure glitter unicorns. The artist shades with glitter, which is quite a unique talent. She creates an allusion of depth and contour. 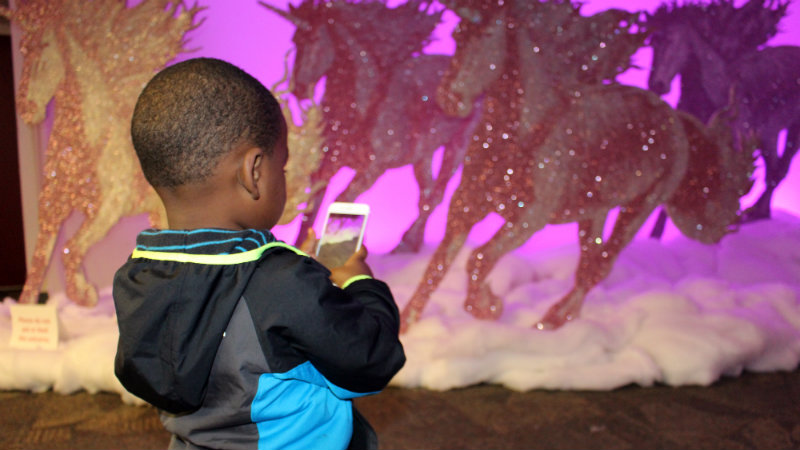 Why did you choose the Providence Public Library for the Unicorn Stampede?

When I first came to the state, Jack Martin explained to me that as the fairly new director of the Providence Public Library, he was really looking to bring lightness to the space. How often do you walk into a library space — in a very imposing, beautiful building, I might add — and get hit with sound and life and color and sparkle? The beauty of this location, too, is that the public can visit the installation anytime the library is open. It’ll be up through March 31, with a meet the artist reception hopefully on March 29.

How will the flyers and hotline come into play?

The “Friends” groups for the city neighborhoods — we spoke with about forty — will put up flyers in all the public parks. We intended to start putting up “Missing Unicorn” flyers in mid-February, but with the weather, the Parks Department deemed it unsafe. We’re hoping after this week’s thaw that the public will start seeing flyers in the parks soon.

In April, the Providence Children’s Museum will be hosting a giant glitter phone booth, or PlayPhone, where people can go and dial the Unicorn Hotline and leave a message. The artist will upload the messages to her website, missingunicorn.com. 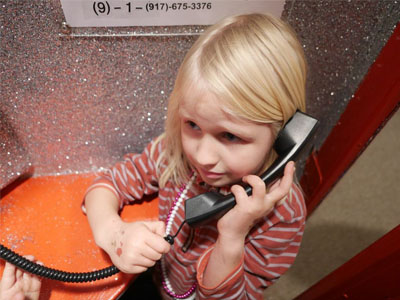 What other unicorn-related events are you planning?

Tomorrow [Wednesday, March 11, 4 p.m.] we’re having a unicorn colloquium at Brown University’s John Hay Library. Three professors at Brown will talk about the history of unicorns in art and science. At the John Hay, there will also be an exhibition of unicorn-related materials on view through July.

Where will the Unicorn Stampede go after it closes at the Providence Public Library?

The unicorns will make their way to various indoor sites — these are indoor unicorns — but there will also be galloping unicorn decals, digital images that can adhere to glass, wood and brick, which will appear on the side of buildings and public structures — wherever we can.

Will there be other unicorn art around the city?

There will be some other unicorn art, perhaps paintings of glittery unicorns. It’s a hope of ours to pay attention to places in Providence that aren’t as visible. We’re trying to be very mindful of all the different neighborhoods and the wide array of organizations in Providence. We’d like to get to as many places as possible.

We’ve also spoken with Trinity Rep and AS220, and they’re interested in having a unicorn presence. Providence is this incredibly art-friendly, creative place. Many great groups in the city have come aboard to make this happen. It’s very exciting because it feels like a testament to the power of the unicorn in a way that elevates us all. The unicorns have landed in the perfect place. 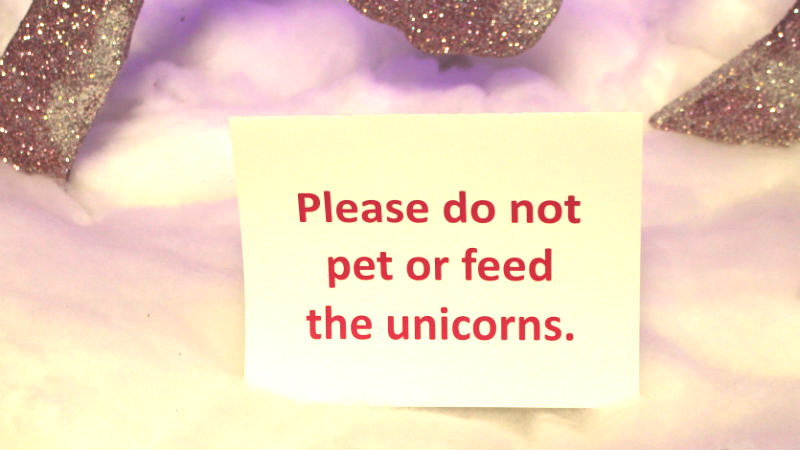 What do you hope the public takes from this project?

Our hope is to create a citywide dialogue to get people talking about public art and street art in a city such as ours — the Creative Capital. The project will evolve. It is a public art project; it belongs to the public. And we’re hoping, given all this terrible weather, that the unicorns begin to make everyone smile again.

For a full list of events, visit unicornsinresidence.com. Volunteers who would like to help hang “Missing Unicorn” flyers should call the Unicorn Hotline at 917-675-3376.