The Rush of a First Summer Crush

Ann Hood remembers the first summer she fell in love.

After two years of going steady, my high school boyfriend and I had broken up during rehearsals for our school play, Oliver!. I didn’t want to be tied down anymore, but when he flirted with the girl playing Nancy I was crushed. Or at least, that’s how I remember it now, all these years later. Like the pictures I so carefully pressed into photo albums, memories fade too. They blur around the edges, grow fuzzy with time.

I do know for sure that my first step into this new life, this unattached single girl summer, was a trip to Bermuda with a pal, paid for with my hard earned money working as a Marsha Jordan girl and part time salesperson at Jordan Marsh. My ninth grade French teacher was working as a travel agent at the other mall, and helped us book the trip. He showed us a brochure with pink sand beaches, palm trees and cars driving on the wrong side of the road. I had no idea where Bermuda was, but I eagerly plunked down the money for our flight — $99 roundtrip on Delta Airlines out of Logan — and a room at the Princess Hotel, breakfast included.

My father, a world traveler, gave me one piece of advice: As long as you can speak English, you won’t have any problems. Looking back, this advice really wasn’t that helpful. I’ve travelled the world now, and many times speaking English did not help. But luckily, Bermuda is a British territory and indeed when we landed in Hamilton I was able to ask how to get to the hotel, something no one had bothered to tell us, two sixteen-year-old girls, alone and far from home for the first time. But we made it to our hotel and, gobsmacked by its splendor, spent the next week having high tea and rum swizzles and soaking up the sun. I met a boy from Philadelphia whose family took us along on boat rides and out to dinner and who, on my final moonlit night, gave me a kiss (or two? Or many?) at last.

You would think that, with the pink sand and the moonlight, this might be the summer romance I want to tell you about. But no. He returned to Philadelphia and that was that. A sundrenched memory, photos in that album, a pleasant blur of a sixteen-year-old’s romance today. Back at home, I resumed my life at Jordan Marsh and Scarborough Beach. I went on dates. Lots of dates. In fact, I saw the movie Paper Moon three times that summer with three different boys. I felt worldly — I’d been to Bermuda, after all! — and free and on the verge of the rest of my life. Then one night I went to work the six-to-ten shift at Jordan Marsh and my world got turned upside down.

Beth and I had stayed late at the beach because it was such a perfect beach day. We ate a quick roast beef sandwich from Walt’s, then I had to shower and dress and get to the mall, fast. My grandmother, Mama Rose, grumbled at me. I had left sand in the bathtub. I was being rude by leaving so quickly. I was thoughtless, selfish, and on and on. Mama Rose grumbled a lot that summer. As soon as a boy brought me home from a date, her small figure appeared at the front screen door and if she saw us kiss, her voice in its broken English rang through the summer night air: Anna! Time to come inside! Now!

That night I slid behind the wheel of my parents’ enormous Ford LTD, white with maroon trim, and drove to the mall. I always got a slight thrill when I parked in the employee parking lot at the back of the store and entered through the employee entrance, like I was an adult, an employee. And then, right there at the employee entrance, a boy held the door open for me. Reader, this was no ordinary boy. This was an older boy, maybe even a college boy. He had on khaki pants, which no boy in my school wore, and a shirt the color of raspberry sherbet. He had on wire rimmed glasses. And he smiled. At me. Something like an electrical current ran through me. In fact, even writing this now my stomach did a little leap. He said something to me, something I don’t remember except that it was witty enough to let me know that this boy was also smart. 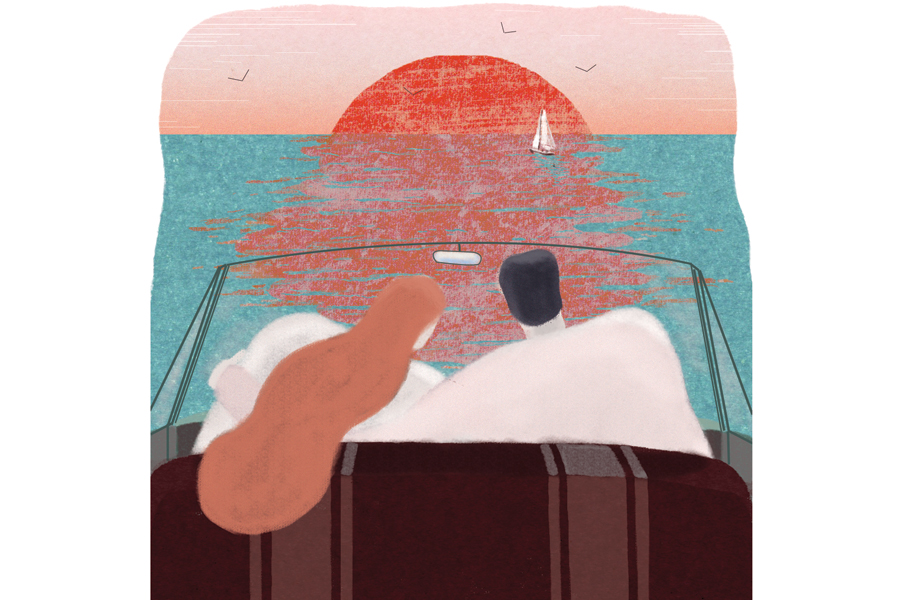 We walked together into the store, and up the escalator, parting at the linen department. How did I ever get through those next four hours? I couldn’t think straight. I couldn’t calm my stomach. I could only think of that boy. Finally ten o’clock came and the store closed. I cashed out my drawer, a laborious exacerbating process, and went to the spot where we all dropped off the money from the cash register. There, obviously waiting — for me! — he stood. “Finally!” he said with a combination of certainty and joy. We walked together back out to the employee parking lot where we stood and talked. And talked. And talked. He was a junior, nineteen years old, practically a man. He liked exactly everything I liked: poetry, the beach, movies. The giant lights that lit the parking lot went off and still we stood there talking. He had gone to a college I had never heard of (I hadn’t heard of any colleges, really) somewhere in the south, but was transferring to URI in September. Before I got back in my parents’ car, we had a date to see Camelot, which he was very excited had been reissued and which I had never heard of.

From that night on, all I could think about was him. We went to see Camelot and I pretended to know who Richard Harris was. He asked me out for the next night, and the next, and just like that the summer became a blur of hamburgers at the Ground Round and more movies and making out in his Fiat as the waves crashed on the beach in front of us. At the beach, if he went in the water and I stayed on the blanket, he would shake his wet hair on me when he returned, like a puppy. And I would squeal and tell him to stop when what I meant was Don’t stop. Ever. If we both went in the water he put me on his shoulders and carried me through the surf, his strong hands holding tight to my tanned ankles. I was in love. And I thought he was too. Did he tell me he loved me? I honestly don’t remember. But my heart does. My heart says: That boy loved you.

As the summer drew to an end, we made vague plans about weekends at URI. I schemed for hours trying to figure out a way to convince my super strict parents to let me go to visit a boy at college in his dorm room for a weekend. The nights grew chillier. “Maybe you can come down and see Roberta Flack’s concert?” he said vaguely the night before he left. Then we kissed until my lips felt bruised.

When he didn’t call that first week, I told myself it was because he was adjusting to life at a new school. But when I saw that the Roberta Flack concert was the following weekend, and he still hadn’t called, I felt my heart start to break. I mean, it felt like it was literally breaking. I summoned my courage and called his dorm, waiting for someone to answer the pay phone and then hear his beautiful name called down a hallway, his footsteps approaching, the phone booth door shutting, his voice — his voice! At last! — saying hello. What was said during that awful phone conversation? I have no idea. I know it was awkward. I know Roberta Flack was not mentioned, though later I cried myself to sleep listening to her sing “First Time Ever I Saw Your Face.”

Columbus Day weekend, still crying over this boy I loved, my mother agreed to drive me past his house, in the hopes that I might glimpse him one final time. There was his car in the driveway. There was his silhouette in a window, his head thrown back in laughter. I didn’t want my mother to drive away, but what was there to do there? I watched him until we turned the corner and he disappeared from sight. The leaves were starting to turn, glorious red and bright yellow. The air was crisp. And I knew that summer was over.