The How and the Why Unleashes Theories about Female Evolution

The female reproductive system is a complicated mystery that we still can’t figure out. In fact, none of us really understands why it works the way it does. 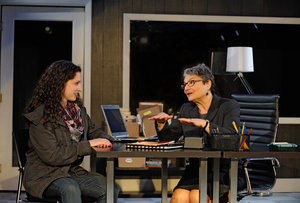 The news today of Kate Middleton’s pregnancy stirred many outbursts of “Finally!” or “It’s about time!” Prince William and Kate have been married since April 2011, and many wondered what took so long for the couple to have a baby on board. Some couples are waiting longer to have children, and some simply take longer than others to conceive, even when they’re ready. Maybe it’s because the female reproductive system is a complicated mystery that we still can’t figure out? In fact, none of us really understands why it works the way it does.

The How and the Why, directed by Shana Gozansky and written by writer and producer of HBO’s "In Treatment," Sarah Treem, who just delivered a baby of her own over the weekend, sheds some light  on this matter. The play, showing at Trinity Repertory Company's Dowling Theater through December 30, discusses scientific theories of female evolution, menstruation and menopause, and it brought forward fascinating hypotheses about the purpose of a woman’s time of the month. We know how a woman menstruates, but we still do not really know why.

Humans are one of the only mammals to go through menstruation, besides some primates, and we are the only species to go through menopause. Why is that? This play theorizes through spitfire New York University Evolutionary Biology graduate student Rachel Hardeman (Brown/Trinity MFA actress Barrie Kreinik) that human females are more sexually active than any other species, and that menstruation is a way for women to guard themselves from pathogens introduced to the female body through sperm during intercourse. She says that every month, the woman must shed her uterine lining in order to protect her body from infection.

The How and the Why takes us through the development of Rachel’s groundbreaking idea as it is presented to Professor Zelda Kahn (Trinity Rep resident acting company member Anne Scurria), an expert biologist with more than thirty years of experience in her field and multiple awards under her belt. The pair of women, one young, brilliant and eager, the other middle-aged and quite literally married to her work, battle out their theories in Kahn’s office. Kahn has theories of her own, including the “grandmother hypothesis,” which claims that older women undergo menopause in order to help care for grandchildren and gather food while their daughters were pregnant or nursing (which, during prehistoric times, was all the time).

The science discussed in the play is fascinating, and it had me thinking about why our bodies work the way they do. But if that’s too heavy for you, then focus on the complicated relationship between the two women. The first scene leaves you guessing why there’s such tension and hostility between Rachel and Zelda, but we soon learn that Zelda is Rachel’s birth mother, and it’s an incredulous coincidence that the two have both pursued evolutionary biology. What’s more is that Zelda gave Rachel up for adoption after she was only six days old, deciding to pursue her career over motherhood.

Kreinik is completely natural in her role as an ambitious student intent on shaking up the scientific world. Yet she also has a vulnerable side (her adoptive parents died), she smokes, she’s prone to panic attacks and she has latched onto her boyfriend, also a scientist who has yet to make a name for himself. She considers giving him half the credit for her hypothesis, because they continuously bounced ideas off one another. But if she’s to take credit for the whole project, will she lose him in the process? Meanwhile, Zelda has earned countless awards for her achievements, yet she’s unmarried and never had any other children. She spends her days peering into a microscope, yet there’s an overwhelming loneliness that may never dissipate. Scurria is fantastic in this role as the older and wiser female figure, yet we wonder if she has Rachel’s best interests at heart when it comes to giving advice. Her one-liners are gut-busting throughout the performance, so be sure to stay alert or you might miss some of the funniest moments.

Rachel and Zelda are both balancing personal lives with professional careers, and they’re learning that in order to have both love and success, some sacrifices need to be made. Whether or not they’re willing to make those sacrifices will determine their happiness, but could it already be too late for Zelda to find a happy medium?