The Hard-Pressed Cider Company Crafts a Taste of Fall

The hunt for the perfect cider doughnut led us to an unexpected corner of Jamestown.

I am a bit of a cider doughnut freak. One of my fondest memories as a child was going to Wilson’s Farm in Lexington, Massachusetts. Waxy pumpkins ballooned high over my three-year-old self, but the true attraction was always tucked under a tent with a massive line of people winding underneath: cider doughnuts. Each bite of freshly fried doughnut was like putting fall in your mouth and inhaling sharply. Cinnamon explosions, nutmeg nattering, clove collisions, apple attacks all happening at once, all tucked into a ring of dough sprinkled with spices and sugar, warm, comforting.

I have had many iterations of cider doughnuts throughout the years, from store-bought ones to my own attempt at making them (which ended in some burnt dough rings and patience equally frazzled). None compared to the wondrous ones at Wilson’s Farm. That is, until I paid a visit to the Hard-Pressed Cider Company in Jamestown.

Pulling into Weeden Lane to Windmist Farm was like driving into autumn-land, a place where the sun glints off a faraway lake, a cool breeze rustles the leaves, turkeys gobble and stone walls dissect the landscape. In a bright mood, I happily followed the signs all pointing me towards promises of fresh-made cider and cider doughnuts, though they were hardly necessary, what with the smell of cinnamon and apples wafting through the air.

I walked up to a large trailer humming with activity, and a stack of doughnuts sitting in a plastic tub on the counter. Not gonna lie, I was super tempted to run up, grab the container and make off with it in what would go down in history as the “great doughnut heist of ’16.”

I somehow managed to resist the temptation (probably the wiser decision) and instead spoke to Hard-Pressed Cider Company’s founder Rob Swanson about just how he got into making cider and doughnuts and what the process entails.

He first dipped his cup into the cider business when he was in college at the University of Rhode Island studying environmental science and management. 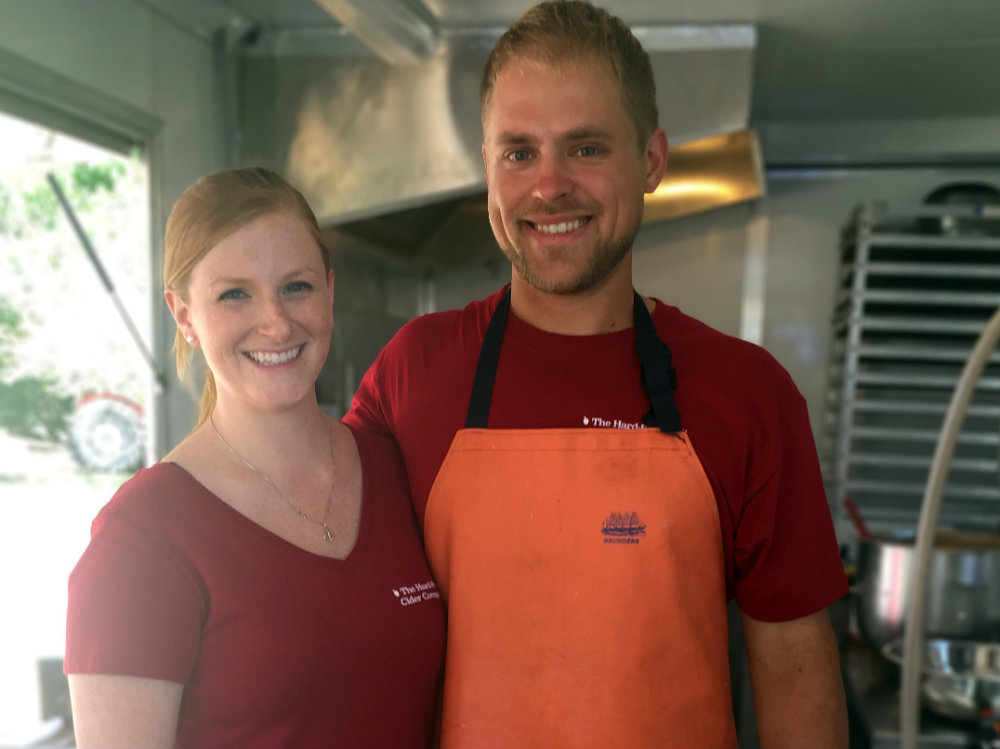 “One of my best friends started making hard cider in his dorm room at URI. Then my uncle had a cider press, so I started making cider on the weekends,” he says as he surveys the cider-making process, which trails its way outside the trailer.

“It kind of turned into a party gig, where people would ask us to come and press for their party,” he says. “From there, Roger Williams University approached us to press at their Eat Local challenge. They told us we needed a business name and at that point it was like, oh…business?”

He laughs, looking at the gaggle of people starting to line up to get their fresh-made doughnuts.

“I never expected to be making cider,” he says.

After being thrust into the business-world, Swanson applied for an SPA loan and purchased the trailer, equipment and his baby, the ultraviolet light machine — a contraption that sounds more like a progressive rock band name than what it really is, a pasteurizer.

“The ultraviolet light machine uses UV light to break down the DNA of any pathogens so they can’t reproduce. It makes the cider essentially sterile. It’s the same as pasteurization, just doesn’t use heat,” he explains.

Who knew cider making would entail breaking down DNA?

The other important part of making cider and cider doughnuts is, of course, the apples.

“We buy most of our apples from Pippin Orchard in Cranston and Harmony Farms in Scituate. All really good growers, I don’t have anything bad to say about any apple grower in the state,” Swanson says, gesturing to the tub of apples to the left of us. He smiles. “We try and keep everything local.”

Today’s apples are from Pippin Orchard and are a blend of Macintosh, Honeycrisp, Granny Smith and Paula Red.

“Generally you want to go for a blend. It’s kind of the orchard runt, these are the apples that are blemished or dented or didn’t get a full pollination,” he says. “You can take a look, our apples, everyone always asks: ‘Oh aren’t they full of worms?’ And it’s like no, we’re not using apples that are full of worms.” He laughs. “They’re just a little misshapen.” 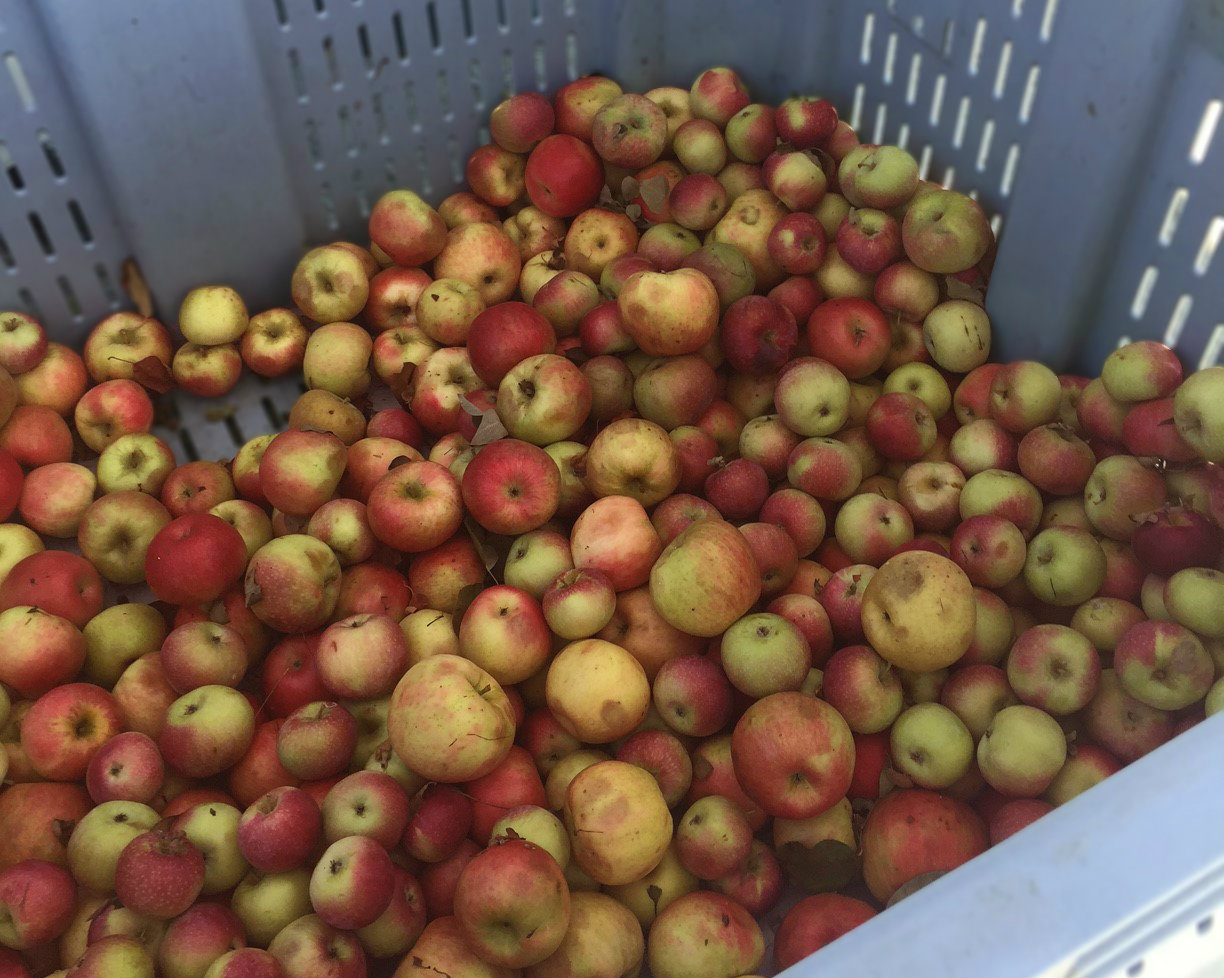 The process of making cider starts with a good washing, where the apples are loaded onto a conveyor belt that squirts them like a car wash, getting them good and clean.

They then feed up into the trailer, where they are mashed and crushed. The apple pulp is transferred to a squeezing machine, where it is pressed. The juice is then pumped over to the ultraviolet light machine (cue the intense electric guitar riff) and voila! Fresh pressed, no-sugar-added cider.

Swanson’s recipe includes cinnamon, nutmeg, cardamom, cider and a lot of fresh apple, which he says is the secret ingredient to a good cider doughnut.

“I wanted to make a cider doughnut that I liked, so we put a lot of apple in it,” he says.

Swanson strides into the back of the trailer, washing his wellies in tubs of water before clambering over to an odd-looking contraption in the far left corner — a giant mixing bowl filled with cider batter.

He turns a wheel on the machine, moving it over a huge vat of hot oil. Plop, plop, plop, the machine makes small popping noises as perfectly doughnut-shaped blobs of batter are dropped into the oil.

“Gotta grab the drumsticks,” he says after swinging the batter dispenser to the side. He grabs a pair of actual drumsticks and proceeds to flip the now-golden doughnuts.

He lifts them out using a wire grate, and explains that the final step is to coat them in cinnamon sugar.

I make my way out of the trailer and Swanson’s girlfriend, Jaclyn, who sells the goods, gives me a freshly made doughnut and a cup of cider. 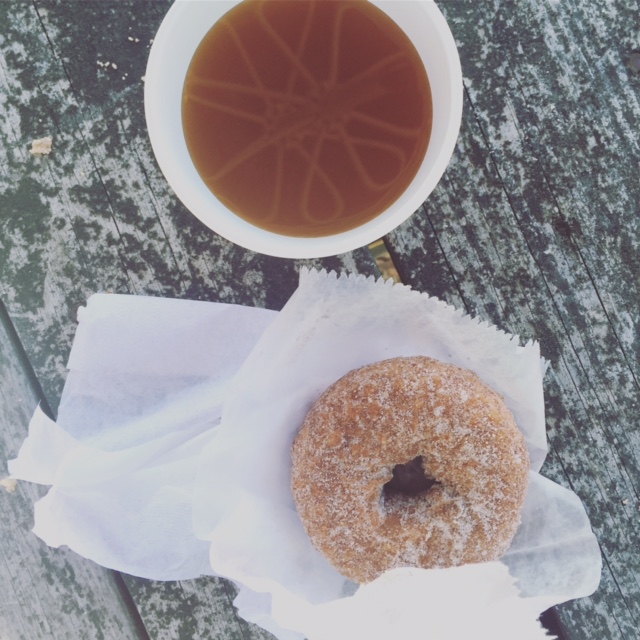 I take a bite into the doughnut and everything fades away, including my sense of time and space. The only thing that matters in this moment is the light, fluffy, rich, warm doughnut melting in my mouth.

I scarf it down and realize that this is seriously the best apple cider doughnut I’ve ever had. And that’s saying something.

Swanson is doing it right. While he may have fallen into cider and cider doughnut making unexpectedly, he sure knows how to make a person happy.

“Last year we kicked it off with Free Doughnut Day because I didn’t really know what I was doing, so I wasn’t comfortable charging anything,” he says sheepishly. “But people went kind of nuts over it.”

As did I, Robert Swanson, as did I.

You can get Hard-Pressed Cider Company’s cider and doughnuts at Windmist Farm, 71 Weeden Ln., Jamestown. Open Fridays, Saturdays and Sundays 10 a.m.–4 p.m. and Monday holidays from 10 a.m.–2 p.m. until Thanksgiving. After that, they will sell hot mulled cider and doughnuts at the Farmer’s Daughter cut-your-own Christmas tree stand, 1650 Broadrock Rd., South Kingstown, on weekends 10 a.m.-4 p.m.