The New Families of the Opioid Crisis

More and more infants are born exposed to opioids, and some experience severe withdrawals. But one family's success story could someday be the rule. 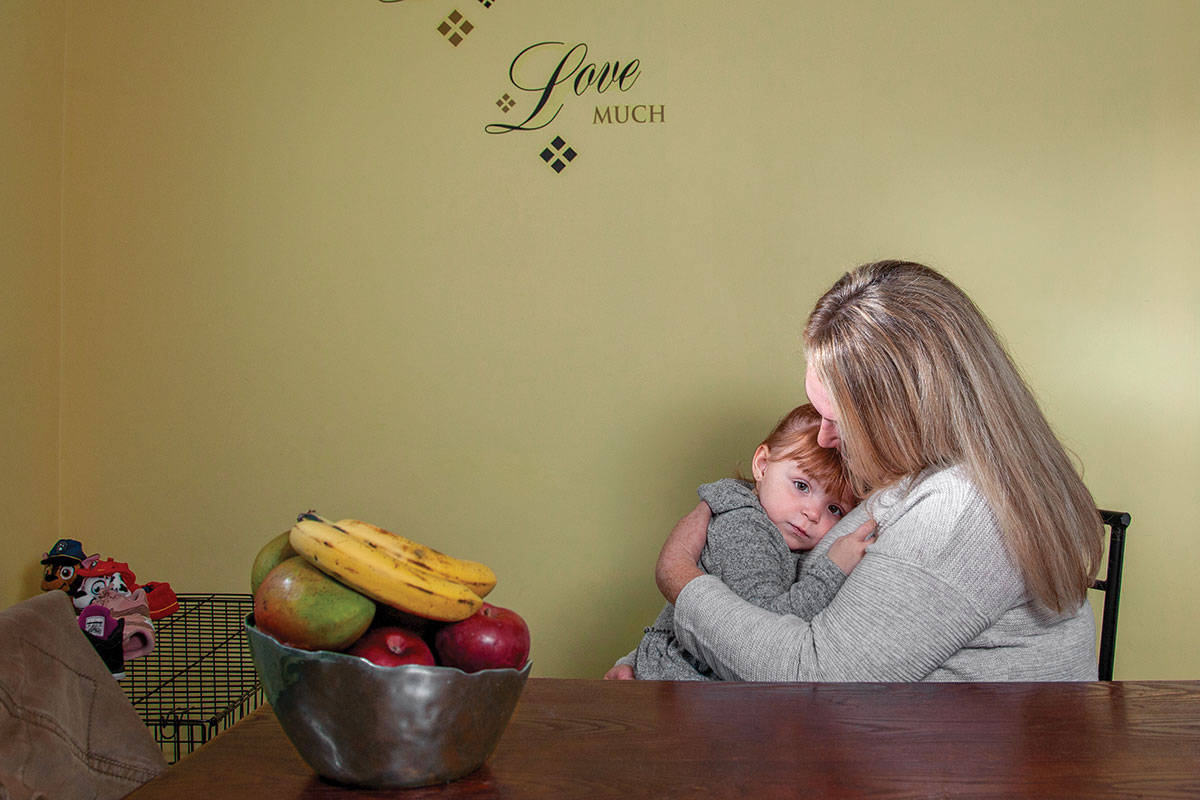 Katie Gonzalez sits with her two-year-old daughter, Alani, in their home in Central Falls. Photography by Dana Smith.

She understood the stakes: Throughout her pregnancy, the then-thirty-four-year-old Gonzalez would continue taking methadone, a medication-assisted treatment that would increase in dosage as her body, and her baby, grew. Methadone kept her from returning to the abandoned drug houses in search of a fix. It saved her life. But it also put her unborn child at risk.

Methadone is a synthetic opioid that reduces narcotics cravings and prevents agonizing withdrawal symptoms. If stopped abruptly, methadone itself induces withdrawal. Gonzalez’s unborn daughter would be exposed to methadone in utero and there was a good chance she’d experience withdrawal once the umbilical cord was cut. Infant opioid withdrawal — marked by convulsions, excessive crying and fever — is known as neonatal abstinence syndrome.

Her guilt was compounded by the way medical professionals treated her.

“My first prenatal appointment, one of the doctors I saw at Women and Infants was so mean to me,” she says. “People judge.”

Her family voiced concerns as well. Gonzalez’s husband, Carlos, who is also in long-term recovery and has custody of his four-year-old son due to his ex-girlfriend’s drug use, had trouble comprehending why she stayed on methadone despite the risks.

“My husband was so supportive throughout my whole pregnancy but even he didn’t understand,” she says. “He’s like: ‘Why can’t you just stop?’ You can’t just stop because there’s a risk you’ll miscarry the baby. It’s not that easy. People just don’t understand.”

Gonzalez’s mother also worried, for the baby and for her daughter, as well. She’d watched Gonzalez weave in and out of addiction. And she’d stepped in to help raise Gonzalez’s son, Kyle, who was born when Gonzalez was nineteen.

But Kyle was always safe with his grandmother at Gonzalez’s childhood home in Wrentham, even when his mother was squatting in drug dens or in jail.

This new baby would be born under different circumstances.

Parental drug use is considered neglect in Rhode Island. Gonzalez couldn’t slip up, not if she wanted to go home with her baby. Not if she wanted a second chance to do it right.

The stakes, and the stigma, had never been higher.