The Effects of Acupressure from Rhode Island Owned Product: Sea-Band 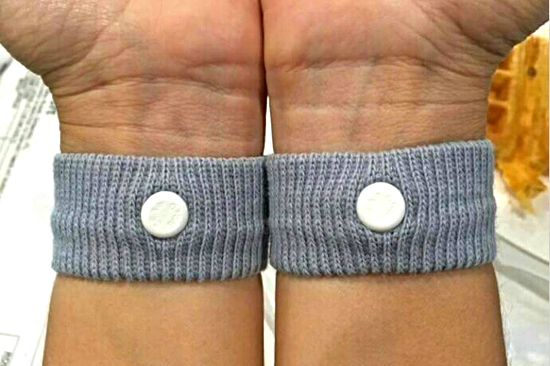 Say goodbye to sea sickness, morning sickness from pregnancy or travel nausea with Sea-Band. Plus, cancer patients undergoing chemotherapy and those suffering from post-operative nausea in hospitals can also slip on a Sea-Band for effective results, too.

These knitted elastic wrist bands look like sweat bands on the wrists but operate by applying pressure (by plastic button) on the Nei Kuan acupressure point. Because the bands do not use drugs, they do not cause any of the unpleasant side effects associated with typical anti-nausea drugs. Both children and adults alike can wear Sea-Bands on each wrist whenever nausea occurs.

The product was originally founded in the 1980s by Doctor Daniel Choy who was aboard a vessel with a seasick crew. He suggested using acupuncture to relieve their unpleasant symptoms by placing pressure on the inner wrist – the nausea and dizziness subsided. When Doctor Choy was preparing to participate in the Newport to Bermuda race, he created the Sea-Band product to relieve nausea for the crew and it worked immediately.

Since then, Sea-Band has been sold worldwide in more than sixty countries, but still maintains its Little Rhody roots – it is owned by Leonard Nihan, a local Rhode Islander who lives in Jamestown.

Plus, check out Sea-Band Heroes, a recognition of those who are suffering from cancer or another obstacle in which their brave actions and courage can inspire others. See their stories here.

Meet Patricia Franco DiPaolo – our latest Sea-Band Hero. Not even Breast Cancer could slow down the busy mother of five and full-time career woman. After a hard-fought battle, she has been Cancer free for ONE month and fights hard for others. To read her full story visit: http://www.sea-band.com/blog/2018/10/11/sea-band-heroes-patrica/ #breastcancerawareness #hero @alexandani @gloriagemmafoundation #breastcancersurvivor #cancer #motheroffive @danapaul13 #seaband #pinktober #womenshealth #findacure #alexandani #gloriagemma5k #gloriagemma #beatcancer