Seven Stars Bakery is bringing bread back to its roots, or more accurately, back to those long forgotten whole grains.

Owners Lynn and Jim Williams started Seven Stars fourteen years ago, creating a brand and breads that have enchanted many with golden crusts, airy pockets and a variety of flavors and textures. Now they are changing the game again with a small-scale side project they call Backdoor Bread featuring newly developed varieties using flours milled from whole ancient grains. The loaves are sold through the back door of their production facility at Hope Artiste Village during the Pawtucket Wintertime Farmers Market every Saturday from 9 a.m. to 1 p.m.

About ten months ago, Seven Stars purchased a small mill from Austria to grind all of the flour for its daily breads, a process that involves procuring whole grains then feeding them through the machine that grinds the grain. The results reap heartier, chewier and denser bread with more flavor than bread made with pre-processed flour.

“It’s all whole grain, meaning the entire grain is being used; nothing’s being sifted off,” Jim says. 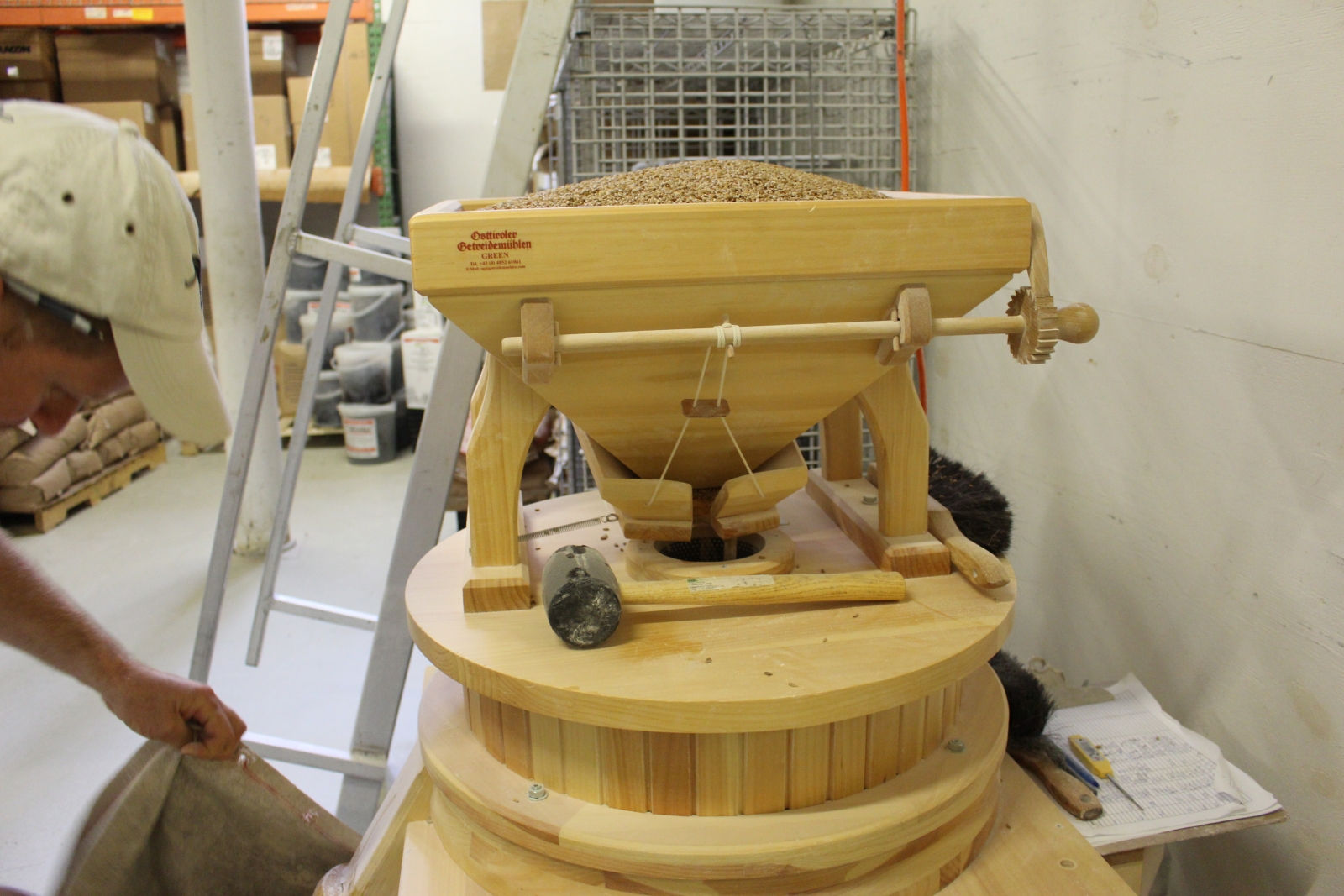 The mill, which grinds about 200 pounds of grain each day, opened a whole new world for the husband and wife team. It exposed them to the nuances of organic wheat varieties as well as organic ancient grains including spelt, kamut, emmer and even sprouted quinoa.

“Jim’s been making basically the same bread but with whole grains, and it’s actually really interesting how different they taste from each other,” Lynn says.

Within the category of wheat itself, there’s a new appreciation for ancient varieties reverberating through the grain industry. Jim Williams bakes breads that highlight these subtle differences in flavor.

“There are two colors of wheat, red and white, and then there are thousands of varieties within those two. So you can take two red wheats, same process, same recipe, same everything, and they taste very different,” he says. “Different aromas, different flavors, it’s really cool. That’s something we finally have access to, and it’s really opening our eyes.” 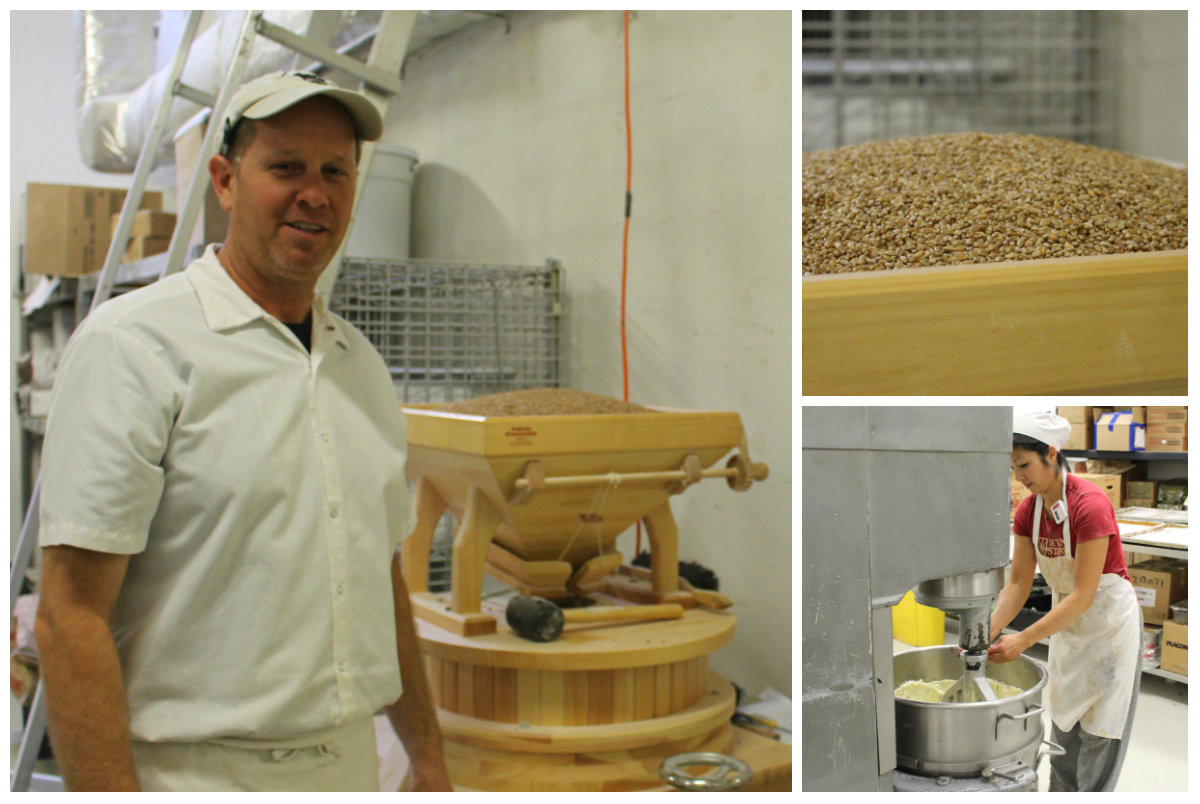 Milling grain is a lot like grinding coffee beans. “You grind it and let it sit for a day, it’s not going to be as good as the day of,” Jim says. “We were always taught as bakers that you wanted two to four weeks of aging on flour before you used it, and that’s probably true for white flour, but for the whole grain stuff, it just seems like the fresher, the better.”

Much of this whole grain and ancient grain experimentation would not have been possible even five years ago. “There’s an evolution in the growing and availability of the more interesting grains,” Lynn says.

“You could get something like kamut, but it was really hard to get and you’d have to scour the Internet and you might find a little one pound bag of it,” Jim explains. “A lot of that was just because there was no desire, no one really wanted it. But slowly, over the last eight or ten years, there’s been a little more of a demand and the farmers are starting to produce it.”

As Jim began experimenting with the Austrian mill and sourcing and supporting farmers who grow the more obscure grain varieties, they decided to start selling the results at the Saturday Wintertime Farmers Market.

“Last week was the first week and it went really well,” he says.

Lynn chimes in: “He sold out in less than two hours.”

As the project grew, it became evident that the small mill from Austria wouldn’t be able to keep up with demand.

“We’ve maxed it out already, so we ordered a bigger one. We’re sort of pushing it to the limit right now,” Jim says. “We’re going to have a whole new learning curve in another month or two when the new one comes.”

But even so, the little mill that could proved to be a stepping stone for crafting breads using whole grains in a way that could not have been done before. It opened a whole new door to the intricate world of bread-making: the back door.

The bread is available Saturdays from 9 a.m. to 1 p.m. at the Hope Artiste Village, 1005 Main St., Pawtucket, sevenstarsbakery.com.