The Dish: A Day in the Life of a Quahogger

Celebrate Quahog Week with special events and menu selections at local restaurants. Watch our video to learn about what it takes to get clams to plate in all seasons.

It’s a brisk March morning at thirty-eight degrees, and the water temperature is almost the same at 7:30 a.m. The sun retreats behind thick clouds and a gray shadow casts over the bay across from Barrington Beach. The wind blows, and it feels a lot colder. When the boat sways, I worry waves will splash over the side of the twenty-five-footer. This weather’s nothing to quahogger Jody King who is out on the open water all winter, close to sunrise, sometimes wearing only a T-shirt, turtleneck, sweatshirt and hat, but no gloves. 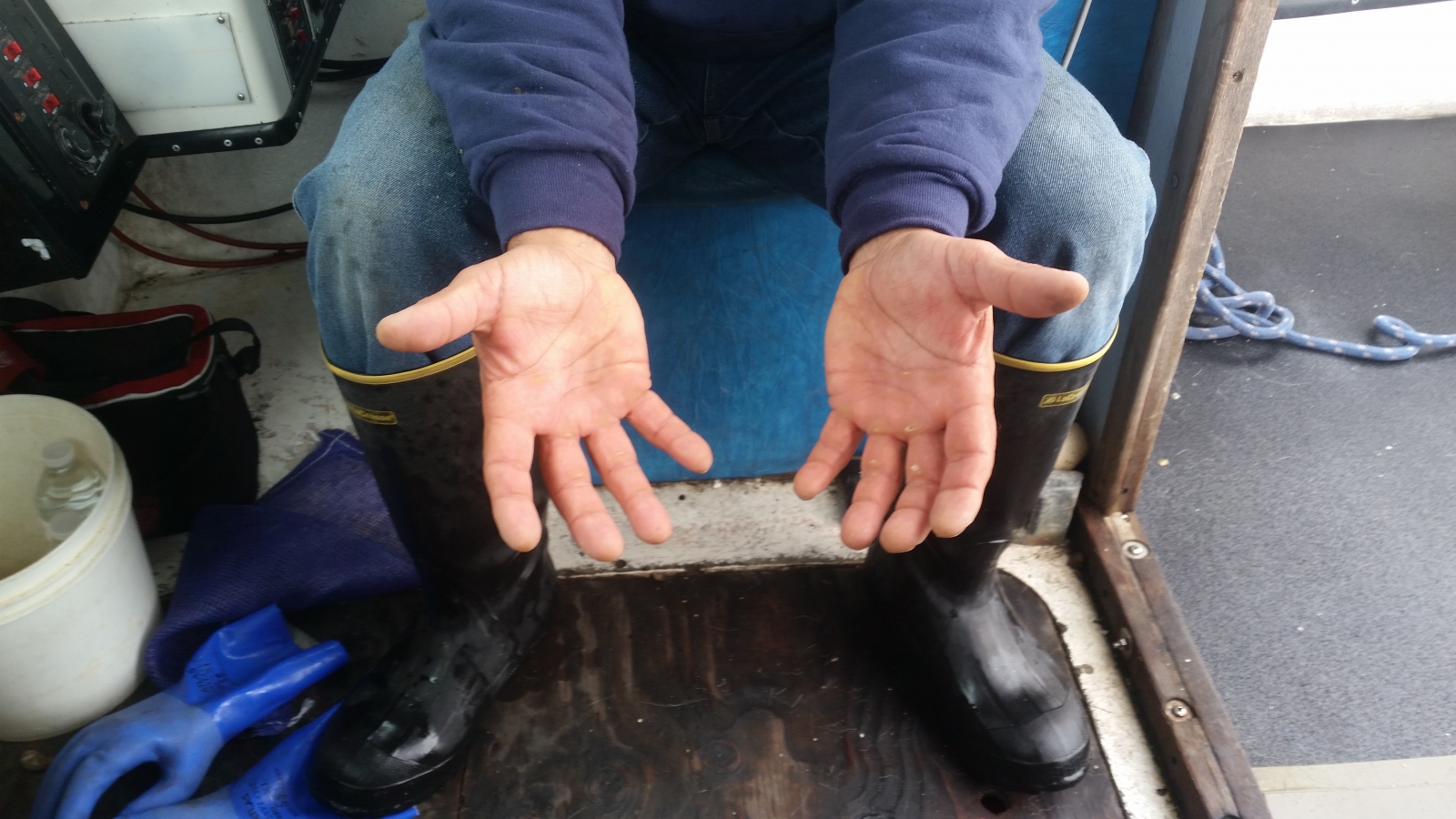 “Everything is cumbersome and inhibits you from working,” he says, explaining how he layers clothing to stay warm but avoids bulky jackets. Me: I’m in a parka, insulated ski mittens and a furry hat made for a sherpa. And I’m sitting in the sheltered cabin, observing, while a little heater keeps me somewhat warm.

As the boat rocks, waves lap the side and King tries to control both the bullrake and the boat. His dog, a German shepherd named Nosmo – an Indian name that also spells out “Nosmo King,” or “No Smoking” – brings me shells in her mouth in hopes I’ll play fetch.

At fifty-five years old, King grew up clamming but he’s been shellfishing as a career for more than twenty years, launching his boat from Warwick Cove Marina, a three-minute walk from where he lives. “I never expected I’d be doing this for a living, but circumstances happen and things fall into place and you find the job that was meant for you,” he says. “If I bleed, I bleed salt water.”

We’re out here today because March 21−27 is Quahog Restaurant Week in Rhode Island, an initiative to increase awareness of the quahog by the Department of Environmental Management, in partnership with the Rhode Island Seafood Marketing Collaborative and local restaurants. The website, seafoodri.com, lists participating restaurants and events throughout the week.

I wanted to see what the job is like when the weather isn’t always pleasurable. We were initially scheduled to go out during the February freeze, but ice blanketed the bay where King keeps his boat. March brought fairer temps. 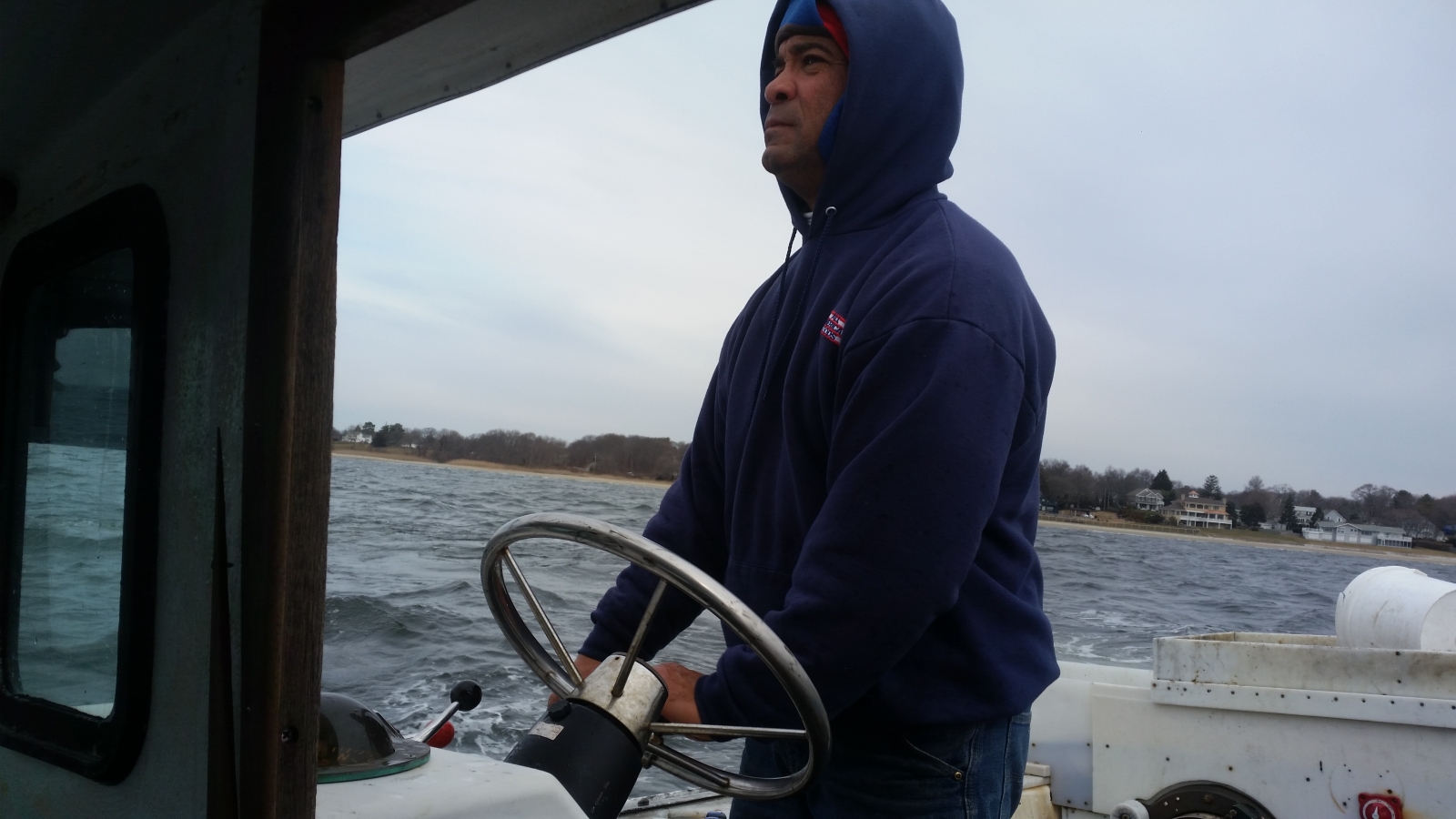 There’s a core group of 100 quahoggers – some are policemen and firemen working between schedules – who harvest through winter. Most are veterans who’ve done it for decades and very few young people take up the challenge. King explains that the group expands to 200 in summer, when teachers and others join the fray. King has two degrees from the University of Rhode Island, one in aquaculture and one in forestry, and he teaches a summer course to teens who visit Brown University, as well as a Clamming 101 course to the public through DEM.

King’s grasping the forty-four-foot bullrake, adjustable by lengthening or shortening sections of aluminum pipe called stales. He shakes it while the rake’s teeth dig into the ocean floor, trawling about eighteen feet below. “The rule of thumb is two to one, so if I have eighteen feet of water, I need at least thirty-six feet of pipe,” he says. “I am an odd ball. I go thirty-six plus eight, so I need forty-four feet.”

The rake can weigh up to 150 pounds when there’s shellfish in it, and he lifts it using a hauler to retrieve his catch up to forty times a day. He’s listening for the sound of hard, heavy shells settling inside the basket as he scours the sand for what he calls “black gold.” Black gold is clams. The shells are much darker and the meat fattier in winter, when they burrow deeper into the sand. Black Gold is also the name of his boat. “Black gold” means he gets paid.

Watch the video of a Day in the Life of a Rhode Island Quahogger.

“I collect everything on the bottom, not just clams. It's shells, it's garbage, it's crabs, it's rocks. I can tell within minutes what I have in my rake and how well I am doing, just by the sound…,” he says, listening to the clatter. “I want to hear this noise all day long. It's the only time you are making money.” 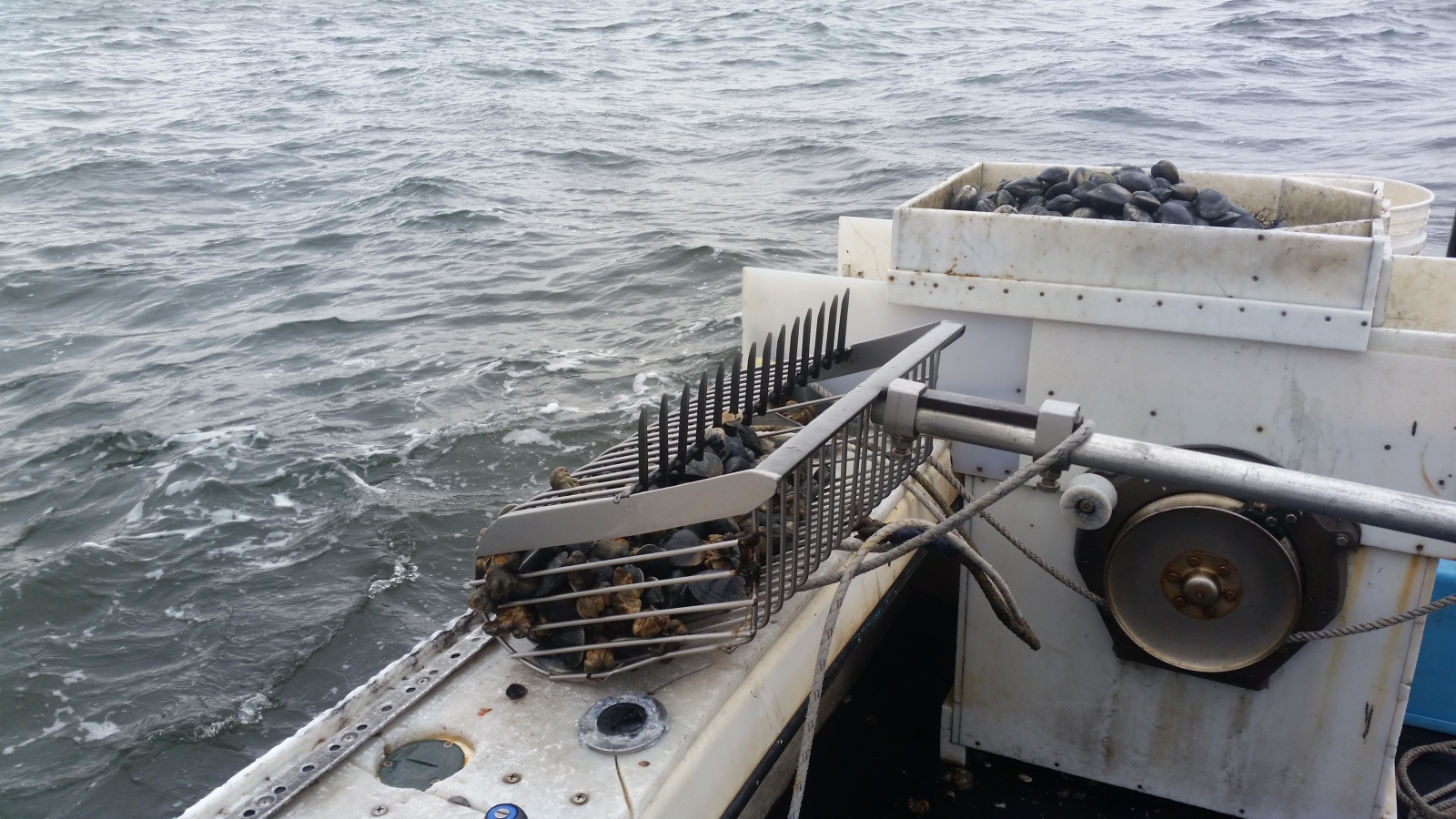 He compares his job to a gold miner, too. Clams like the edges of the sea floor. They only move about four feet in their lifetime once they settle on the bottom, searching for an eddy to bury themselves in. “I try to find these little edges. It's like a goldmine almost,” he says. “A goldminer looks for those eddies where the gold swirls; it's the same thing with clams.”

He lifts the rake on deck, pours the contents of the basket through a rack and the smallest clams fall through the bars to the bottom. He separates stackers (limpets that stick together), rocks and invasive rock crabs from the clams. The crabs get crushed by his fist, because they eat his clams.

“You’re letting nature take its course,” I say, surprised by such malice.

“I am just helping her along,” he says with a laugh, tossing a carcass into the bay.

The littlenecks are the prize, since he gets the most money for them, twenty-five cents each. Cherrystones might earn fifteen or sixteen cents while quahogs only pay thirteen. This stash delivers about twenty littlenecks, but there are lots of undersized ones he throws back.

After six or seven hauls, we’ve been out here for almost two hours. One by one, the group of seven quahog boats off Barrington Beach dwindles down to three or four as the waves kick up. Most of the other boats don’t have cabins, and they are much smaller vessels, between seventeen- to twenty-feet-long. King’s boat weighs around 6,000 pounds so it can handle the surf better.

“Yep, it’s a two anchor kind of day,” says King, dropping another anchor. He tells me how dangerous the job can be at times. He’s lost a few friends out here, one every few years. “If I fall in the water, who is going to throw me a life ring? That's part of the danger of this job,” he says. “You are by yourself and you are out here with the one female you don't want to mess with, and that's Mother Nature. She can kick your ass in a heartbeat and she has no conscience.” One cold April day, King did fall off the boat when the water was forty degrees. Thankfully, he caught himself on the side, his head never went under, and he was able to pull himself back in within seconds.

While harvesting on deck, King explains he can never bring home his clams. If he wants to eat clams, he needs to go to a restaurant to enjoy them. His wife is allergic to shellfish, and being close to the product can cause her throat to close up. They found out the hard way, out on the boat one day.

By 10:30 a.m., King is the last remaining boat in the group, and he’s ready to call it a day. It’s getting too choppy, and harder to handle both the boat and the rake. He did a lot better yesterday, gathering 600 littlenecks with ease. His goal is always 1,000 per day, but he understands there are good days and bad days. “It's all up to the guy upstairs,” he says. “I call it the switch flip, because there are times when the switch is off and you can't catch a damn thing to save your life, and other times he turns the switch on and you can't do anything wrong.”

Today, he’s collected about 300 or so clams to sell, worth about $70. Many of the shellfish he retrieved and threw back today were undersize, which is a good thing. “My favorite thing to see in the world is stuff falling through my rack,” he says. “How often do you go to your job and actually see the money that you're going to get six months from now? It's my bank account. When I see my babies, I can tell how well my stock is doing.” 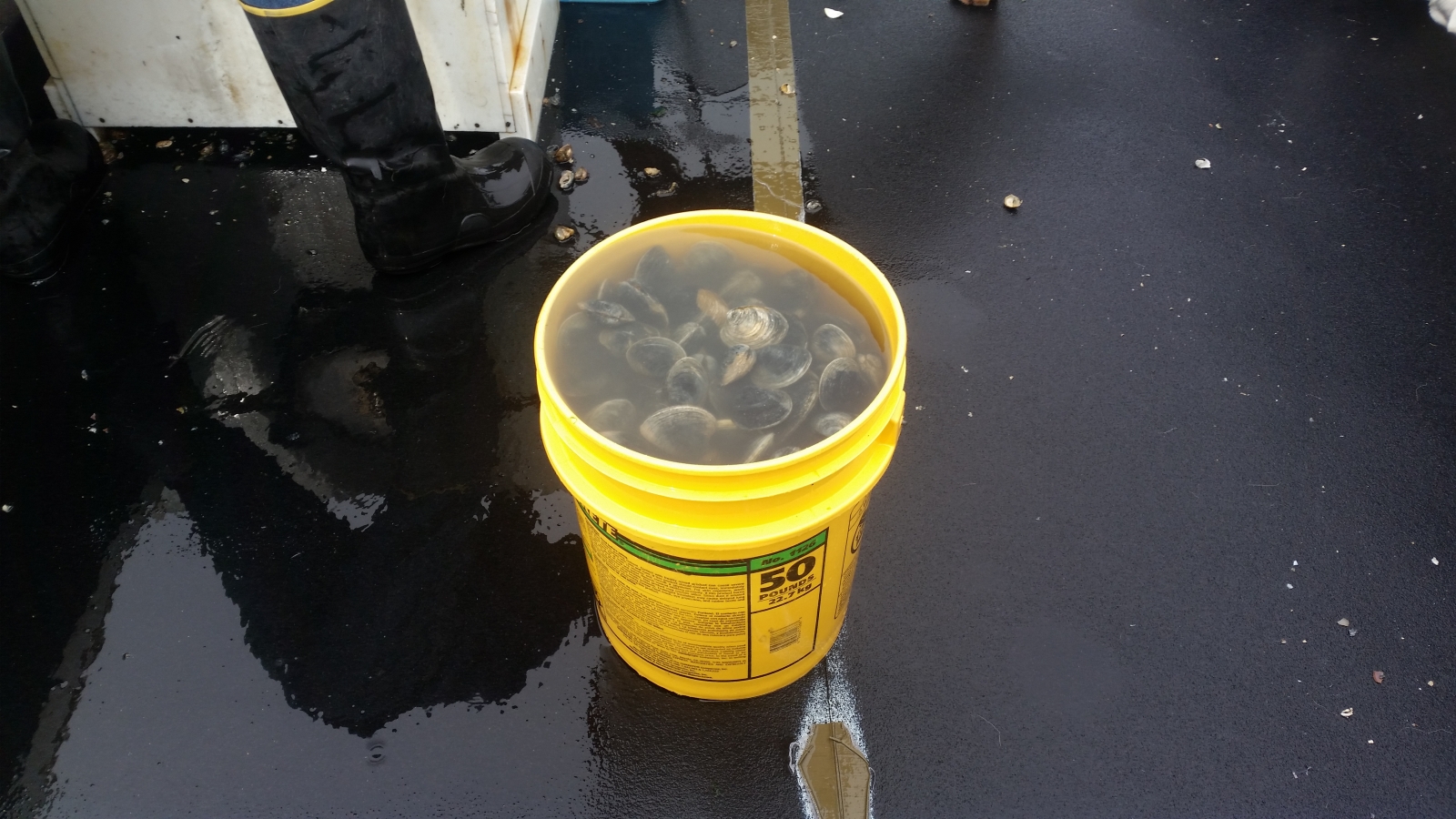