The Dish: 11 Local Beers for Celebrating the Holidays

Our local brewers have created everything from hazelnut and coffee stouts to an eggnog milk stout and a beer based on chocolate-covered bacon.

Bucket Brewery: Fireside Harvest Ale is a slightly sweet, spicy, dark ale based on traditional New England Indian pudding. Ingredients used in the brewing process include molasses, vanilla, cinnamon and ginger. The beer is only available at the brewery. When you visit, bring a non-perishable food item to be donated to the Rhode Island Community Food Bank and Bucket will give you a free pint of beer. The brewery's regular hours are Friday from 1 to 7:30 p.m. and Saturday from 11 a.m. to 5 p.m. Holiday hours can be found on Bucket's Facebook page. bucketbrewery.com 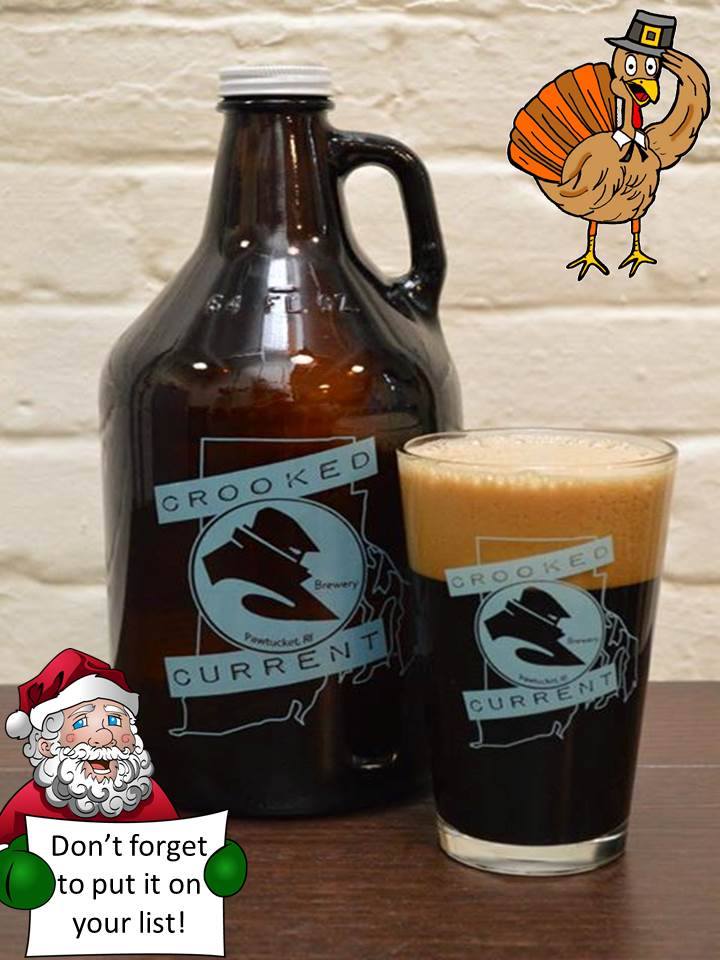 Crooked Current Brewery: Extortion Eggnog Milk Stout is sweetened with lactose and thickened up with a dose of flaked oats and flaked barley. Eggnog spices such as cinnamon stick, vanilla bean, whole clove and nutmeg are added to the boil to kick up the spice factor. The beer will be on tap at the brewery only through Christmas and then Crooked Current will introduce its next winter seasonal, the Hawaiian Robust Porter, with notes of chocolate, toasted coconut, pineapple and cold brewed coffee, which are all added after fermentation and before kegging. The brewery's regular hours are Thursday from 5 to 7 p.m., Friday from 5 to 8 p.m. (except Christmas) and Saturday from 1 to 5 p.m. crookedcurrentbrewery.com 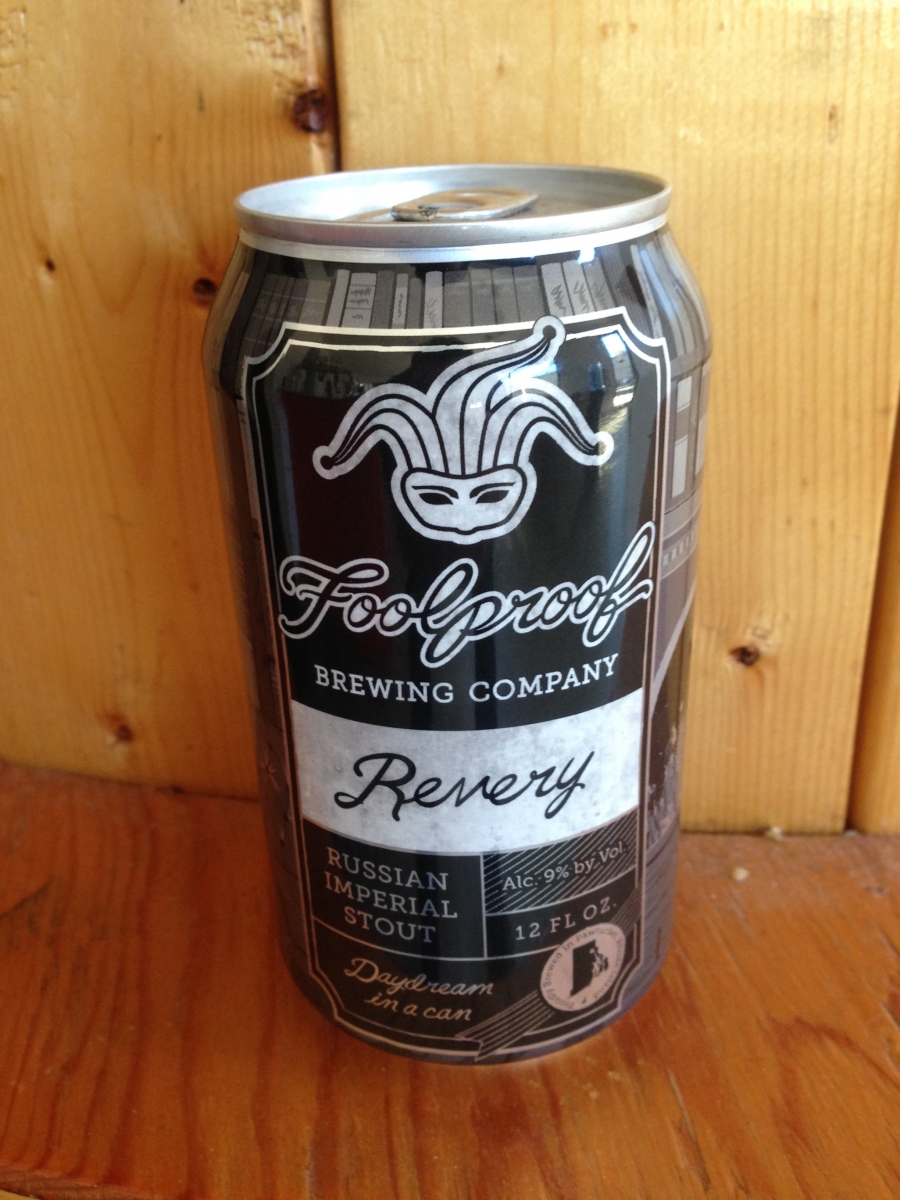 oolproof Brewing Company: Revery Russian Imperial Stout features English and American two-row malt, crystal 45, Carafa, roasted barley, chocolate malt and oats, combined with noble hops to make a smooth but rich stout. The beer is 9 percent ABV and can be purchased at local liquor stores, or you can pick up samples at the brewery during Foolproof’s regular hours on Friday from 5 to 7 p.m. (except Christmas) and Saturday from 1 to 5 p.m. Check the Facebook page soon for holiday hours. foolproofbrewing.com

Grey Sail Brewing of Rhode Island: Mary Ann's Ginger Spice or the Leaning Chimney Smoked Porter will be a hit at your holiday table. Mary Ann’s Ginger Spice has cinnamon notes followed by a jolt to the palate from gi 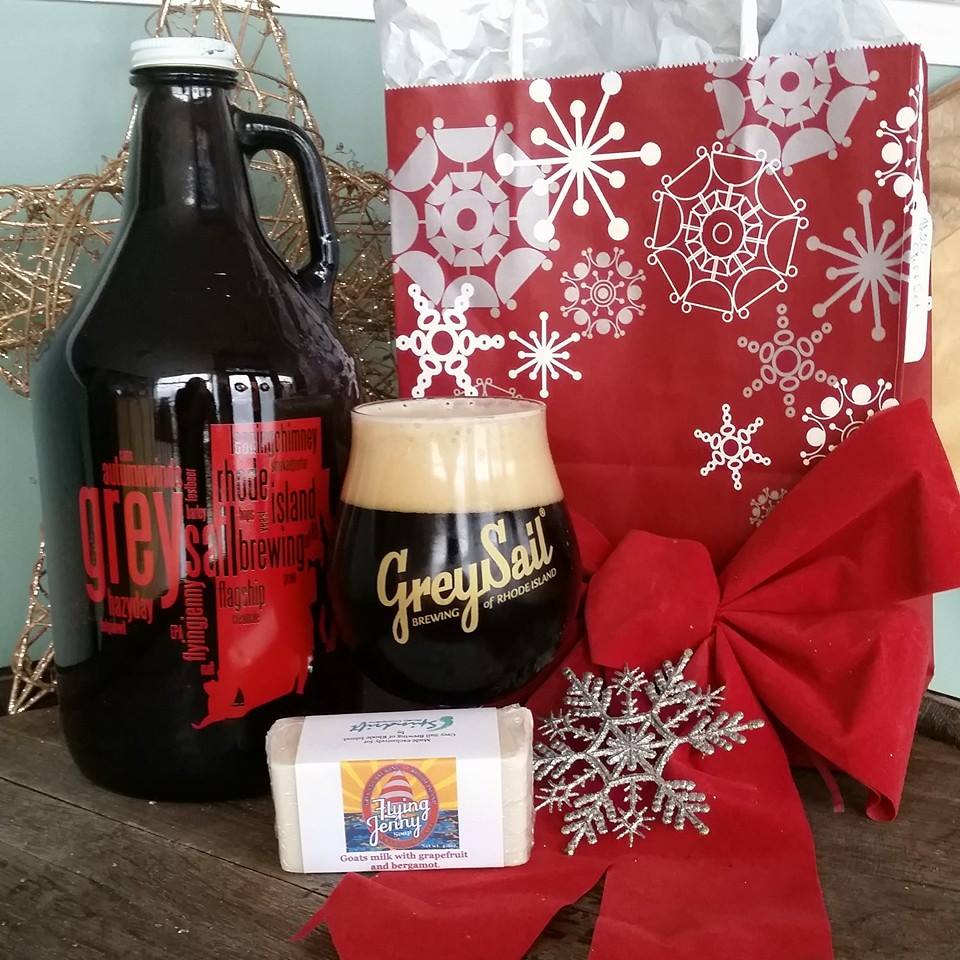 nger that is added in the brewing process along with vanilla bean and cinnamon stick. The Leaning Chimney Smoked Porter is brewed with peat smoked malt, dark malts and American hops creating a piney-resin flavor with a nice chocolate backbone and smooth finish. Ginger Spice is available at the brewery and the porter is available at the brewery and in six-packs of twelve-ounce cans at local liquor stores. Check the Facebook page for holiday hours. greysailbrewing.com 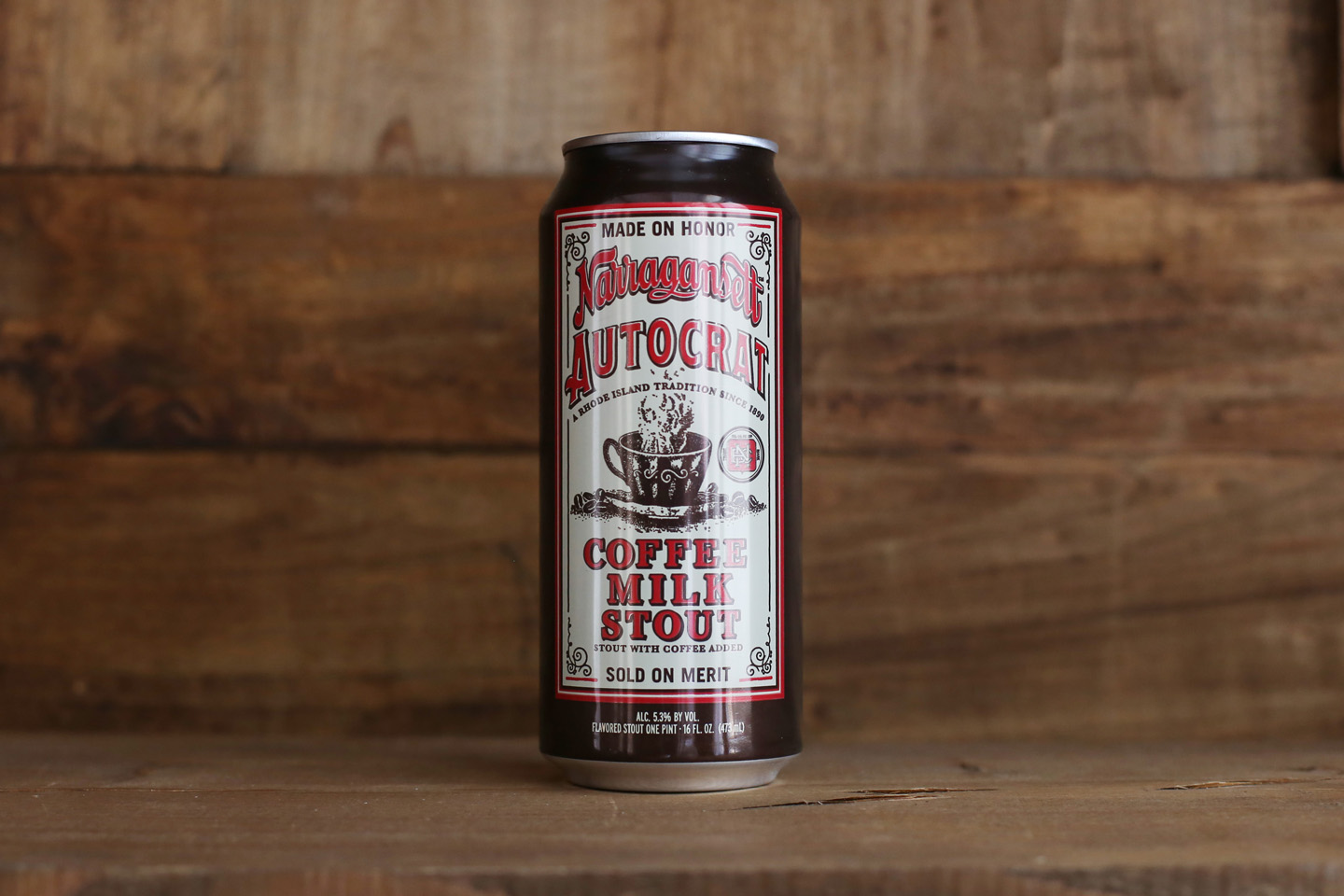 Narragansett Beer: Sweet and bitter notes are balanced in Narragansett's Autocrat Coffee Milk Stout, back for the third year in a row. The mash-up brew from two beloved companies is made with the robust flavor of Autocrat Coffee with notes of roasted barley, chocolate malt and rich crystal malt. You can pick up a six-pack of sixteen-ounce tall boy cans at your local liquor store. narragansettbeer.com

Newport Storm: The Annual Release ’15 is all about that bacon; no meat. It took almo

st two years of research to come up with the right malt to achieve the smoky flavor the brewers desired. Hardwood smoked barley achieves the bacon base while Baird’s chocolate malt delivers the finishing flavor to create a beer based on chocolate-covered bacon with 11 percent ABV. The brew is a limited release and only 3,000 bottles were produced and distributed to local liquor stores. Check the Facebook page for the brewery's holiday hours. newportstorm.com 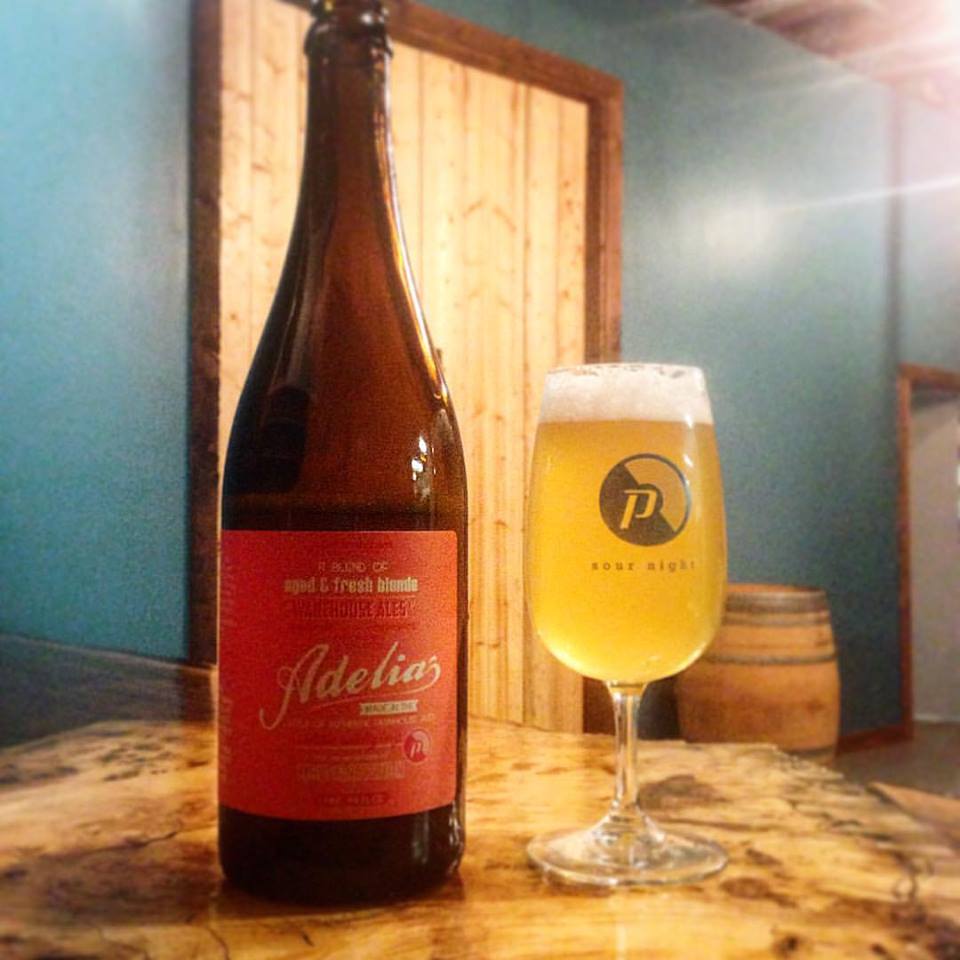 Proclamation Ale Company: Adelia wants to be a part of your holiday celebrations. She is an aged, tart blonde ale (kind of like Hillary but more fun!), fermented with a house culture of yeast and bacteria then blended with a fresh new batch of non-acidic, blonde ale that is dry hopped with styrian golding hops. It is a moderately tart, dry, drinkable beer with lemon/floral notes and  6.3 percent ABV. The beer is available in 750 milliliter bottles only at the brewery. Regular brewery hours are Thursday from 3:30 to 7 p.m., Friday from 3:30 to 8 p.m. (except Christmas), Saturday from noon to 7 p.m., and Sunday from noon to 5 p.m. Check the Facebook page soon for the brewery's holiday hours. proclamationaleco.com

Ravenous Brewing Company in Woonsocket was one of the first breweries to create a coffee milk stout. Brewer Dorian Rave and team created a riff on a Rhode Island favorite using roasted barley, black malt and oats brewed with a special coffee bean blend from New Harvest Coffee, finished with lactose. Go with the stout or try the Bienvenu Red Ale, Dolly Cole American Black Ale (named after the restless soul of alleged witch Dolly Cole from Foster), or the wildflower honey ale, brewed with local honey from the brewer's own beehives. The brewery's regular hours are Thursday from 4 to 7 p.m. and Saturday from 1 to 4 p.m. facebook.com/ravenousbrewco 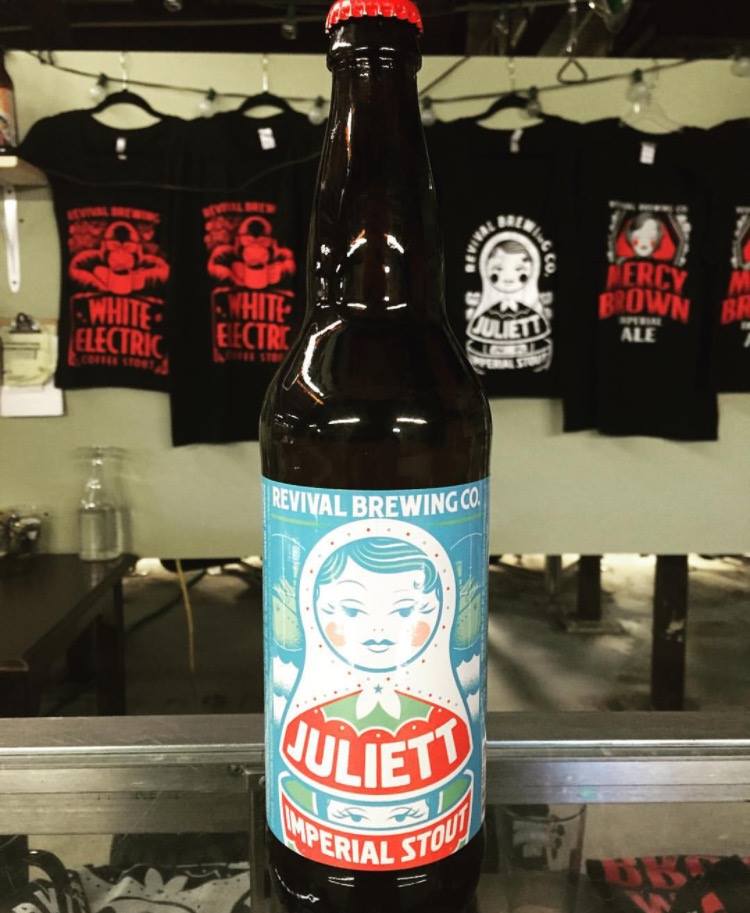 Revival Brewing Co.: Juliett 484 Imperial Stout is an American Double/ Imperial stout that was brewed with roasted barley, crystal malt, chocolate malt, caramalt and Azacca Hops. It has aromas of cocoa and roasted coffee with notes of caramel and chocolate and a bit of smoke. The beer is named after the infamous submarine that was retired and eventually sunk in the Providence Harbor. Visit brewer Sean Larkin at the newly launched brewery inside Brutopia at 505 Atwood Avenue in Cranston. Tasting room regular hours are Monday to Friday from noon to 8 p.m. and Saturday and Sunday from noon to 4 p.m. revivalbrewing.com 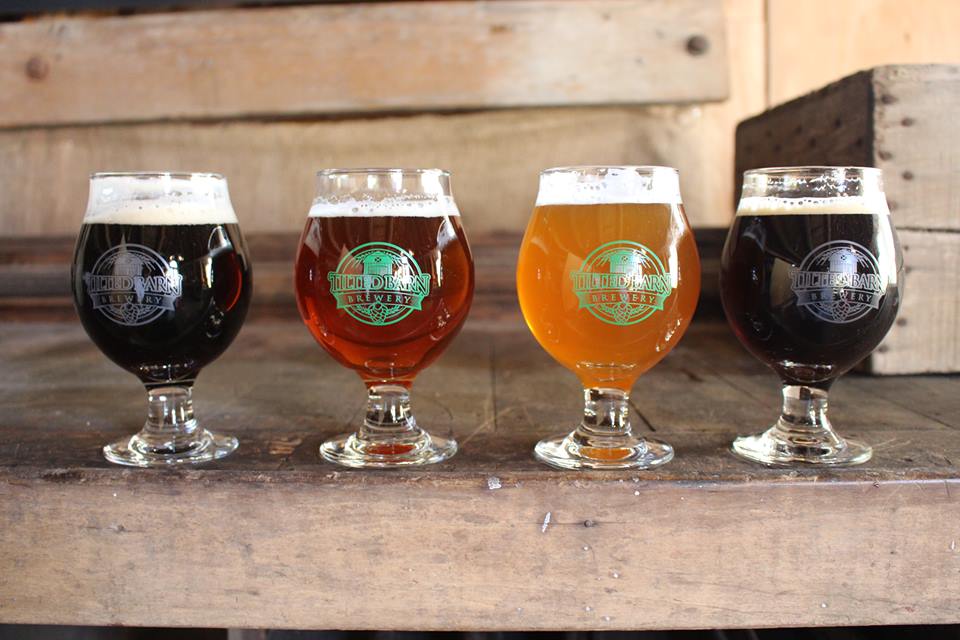 Tilted Barn Brewery: The brewery has a rotating schedule of three beers on tap at a time. Some of the offerings available on Wednesday evenings through Christmas from 5 to 8 p.m. may include: Raffi oatmeal stout brewed with locally roasted coffee for a smooth, slightly nutty flavor profile, and the Winter Sol, a combination of a brown ale and a porter that boasts notes of chocolate and vanilla. tiltedbarnbrewery.com 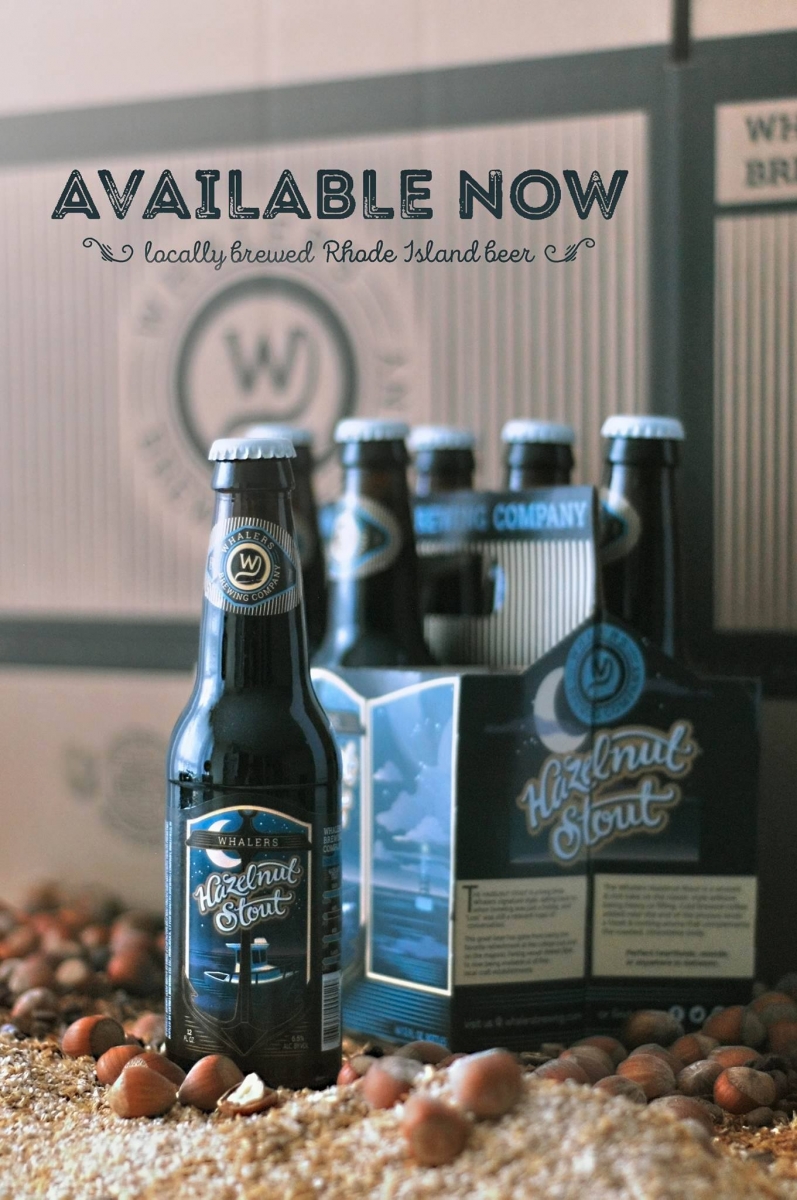 Whaler’s Brewing Company: The Hazelnut Stout is brewed with flaked oats, chocolate malt and roasted barley, and fresh brewed hazelnut coffee is added prior to kegging. It has a thick latte-hued head and notes of chocolate, hazelnut and coffee. The beer is available in six-packs at your local liquor stores and at the brewery while it lasts. Whaler’s regular hours are Thursday and Friday from 4 to 8 p.m. (except Christmas), Saturday from 1 to 7 p.m. and Sunday from 1 to 5 p.m. Check the Facebook page for the brewery's holiday hours. whalersbrewing.com