Flower Power at the Dahlia Shed in Middletown

We got the scoop on the Middletown flower stand, which stocks lush dahlias through summer and fall.

Dahlias are a finicky bunch. Perhaps that’s why Amy Rodrigues deems them “the diva of the field.”

“They need constant attention,” says the flower farmer, who has raised dahlias on a plot of land in Middletown for the last decade.

With too much water, dahlias are prone to tuber rot. Japanese beetles love to feast on their buds. They must be planted and plucked with care. At the end of the growing season, the tubers must be dug up, washed and stored. Despite the work, they’re drop-dead gorgeous, and Rodrigues says she can’t get enough of them. 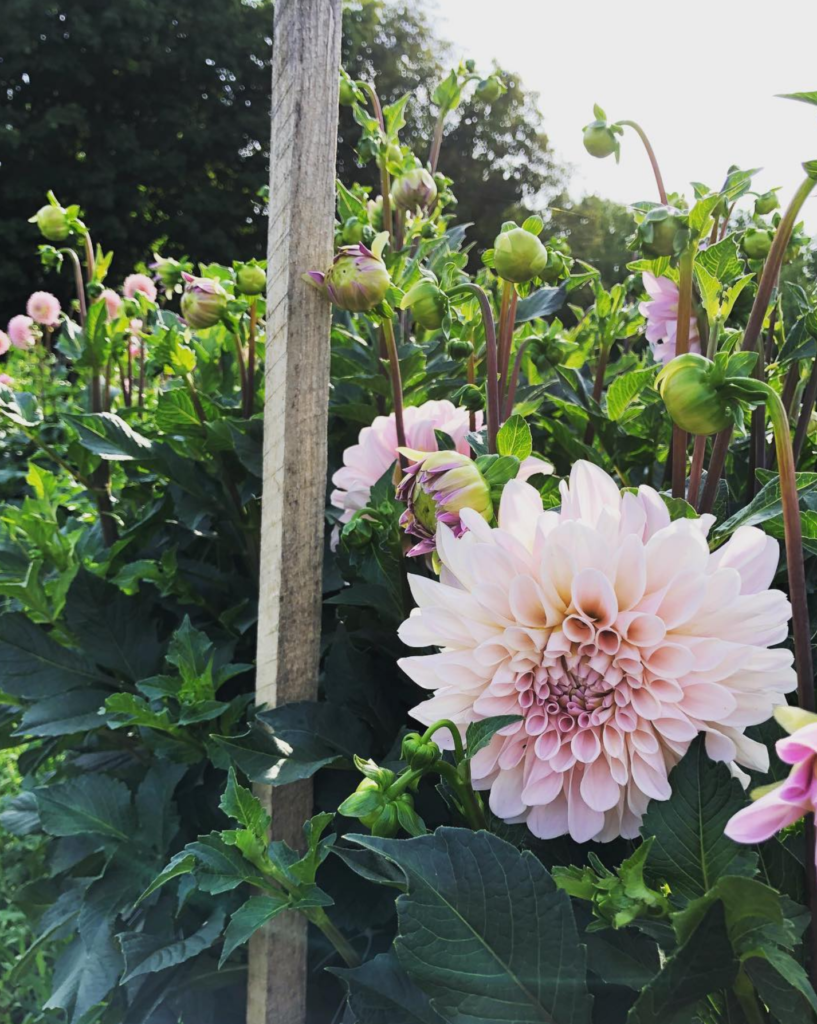 “It’s a real labor of love,” she says one temperate afternoon in July. “But now there’s a system to it and we just get better at it.”

Rodrigues grows her dahlias on about an acre of land leased from Rhode Island Nurseries, where her husband, Jesse, serves as general manager. Her commute to work consists of a few strides from her lovely shingled Colonial across a gravel driveway to dozens of neatly tended rows, each one bearing about 200 dahlia plants.

The climate on Aquidneck Island is ideal for dahlias, Rodrigues says. It’s cooler than mainland Rhode Island, with a later frost. It’s also moist and has a great cross-breeze that keeps most insects away. Barn cats, including an orange tabby named Zoe who likes to prowl through the dahlia rows, take care of the larger pests. 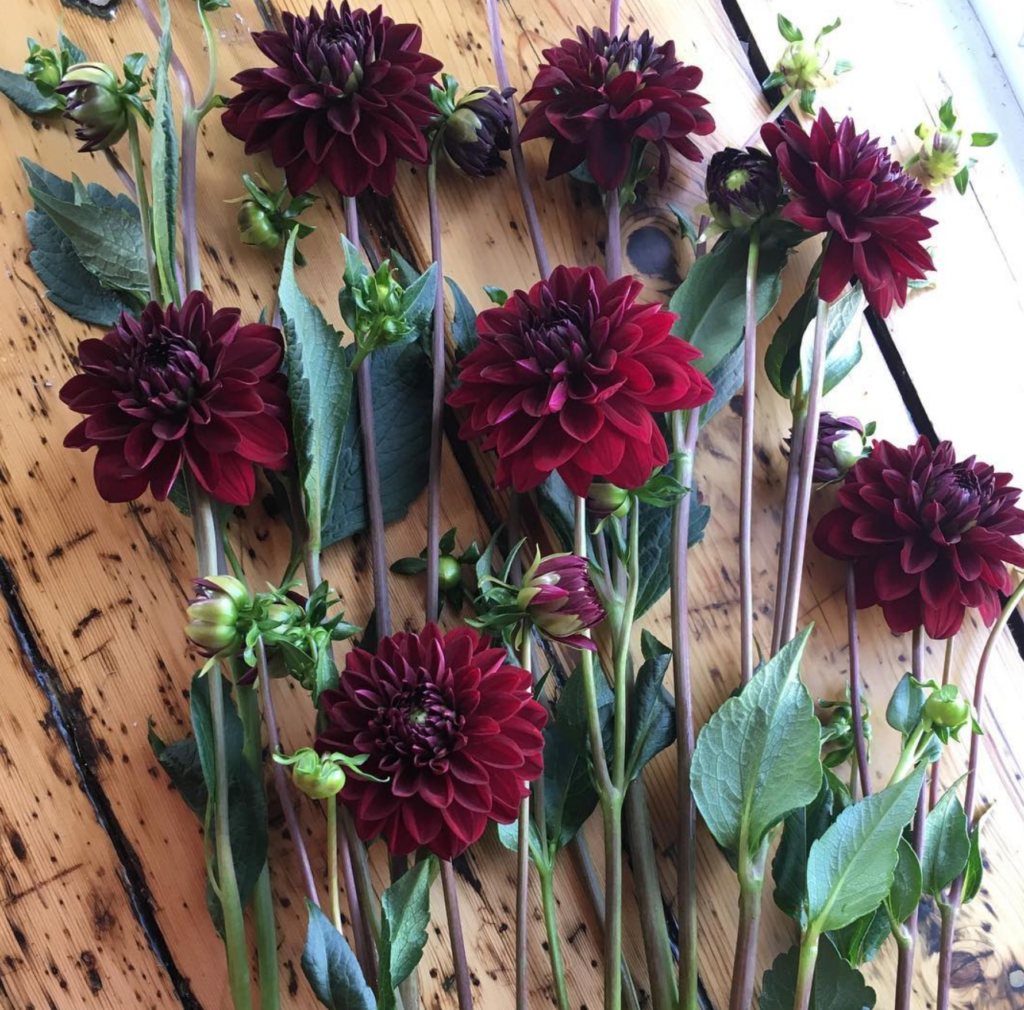 During the dahlia season, which runs July through October, Rodrigues harvests her blooms by hand and during odd hours. A dahlia plucked in the heat of the day wilts faster than one picked in the wee morning hours or late in the evening, when the sun isn’t scorching the land. While other flowers are primed for pick-your-own events, dahlias must be handled by the flower farmer.

“It’s not uncommon for me to be out there at 3 o’clock, 4 o’clock in the morning with a headlamp,” Rodrigues says.

The hours work well for the mother of three; Rodrigues — and oftentimes her husband and two employees — pick before the kids wake up in the morning and after dinner. During the day, Rodrigues makes lists of available and forthcoming varietals for event florists and shop owners. Retail florists include the Secret Garden in Jamestown, Flowers by Bert and Peg in North Kingstown and Chaves’ Gardens in Middletown. 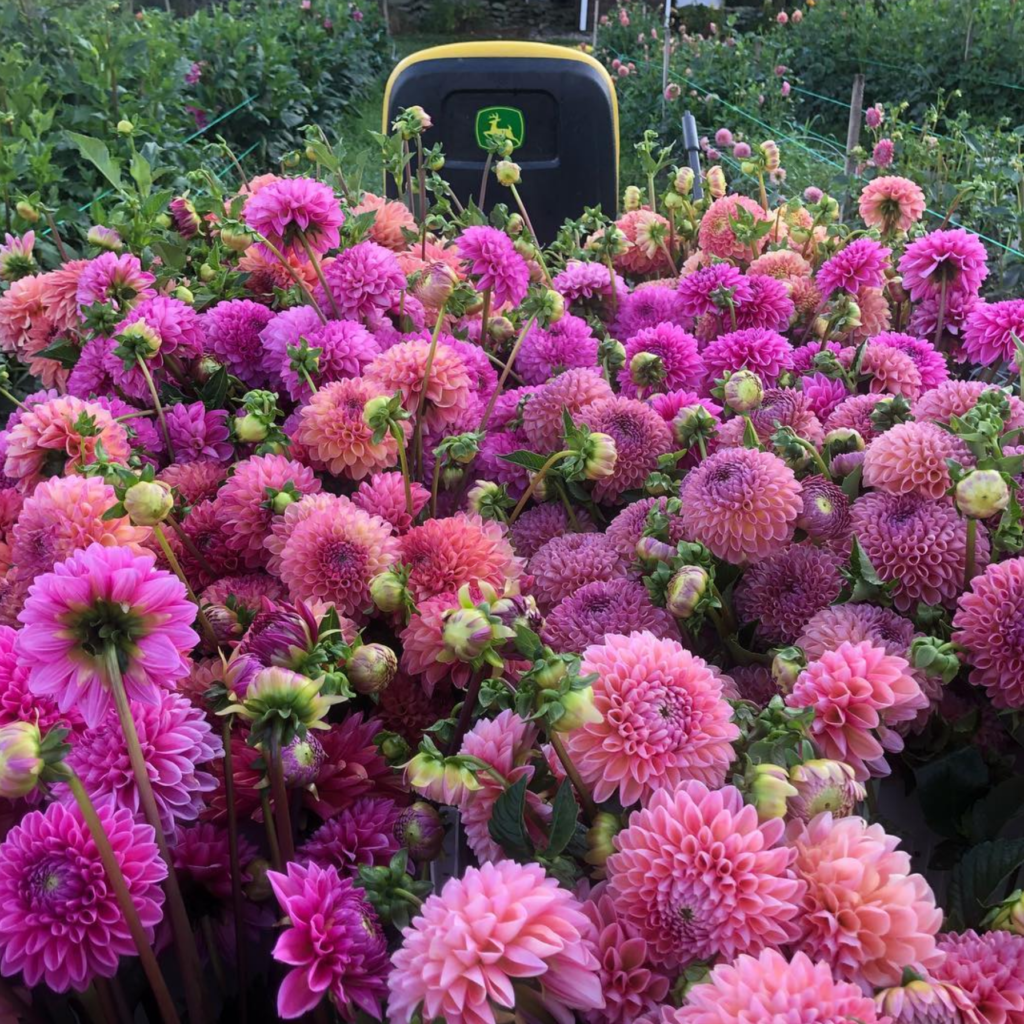 The kids also help out by cleaning out buckets and picking hardier farm flowers, including rebeccia, asters, zinnias and other seasonal blooms used in bouquets for sale in the Dahlia Shed, Rodrigues’s direct-to-consumer flower stand that sits in the gravel driveway between her home and her growing field.

Deeming the Dahlia Shed a “flower stand” sells it a bit short, though. It’s a magical little flower shop all on its own, without dyed roses, carnations or cheap fillers in the way of hardy local blooms. The Dahlia Shed is open from 9 a.m. to 7 p.m. every day. Dahlias are $2 a bloom and voluminous mixed bouquets are sold for $10 or $15, depending on the size. The other farm-grown flowers, including zinnias, can be purchased for $1 a stem. The Dahlia Shed is cash-only, with customers depositing exact change in a small black lock box inside the shed.

“We’re almost ready for an expansion,” Rodrigues says. “It’s been really neat to see. I don’t heavily advertise. Social media — that’s what’s sustaining us. Even customers who live two doors down tell us, ‘I never knew you were even here!’ ”

The dahlia bug on Aquidneck Island is catching on. Even Rodrigues’s daughter Brystol, who is eight, has fallen in love with the showy blooms and is entering her own flowers in a dahlia show this summer.

The work doesn’t end with the frost. Rodrigues and her family dig up, wash and store the dahlia tubers in the family’s root cellar. Any extras are sold to the public in an online tuber sale in January. Last year, Rodrigues says she sold “thousands and thousands” in the online sale to customers from coast to coast.

But if you didn’t plant your own tubers in spring, you can snap up some of Rodrigues’s picture-perfect dahlias now through October.