Brace yourself. David Gracer wants you to eat bugs. And his logic has legs: Protein-rich insects one day may be the key to our survival.

It’s time to try the giant water bug. David Gracer slides one—a slick, armored insect the size of my palm—from a vacuum-sealed bag and sets it on the lunch plate between us. We’re at his kitchen table. The aroma of pan-heated olive oil hangs cozily in the air. I’m chewing on a cricket, and lifting a sauteed cicada off this same plate with a pair of chopsticks.

I stop chewing. “Oh no,” I say to my host, who’s gently escorted me across several taboo-guarded gulfs and ushered me into entomophagy (eating insects) here on a sunny Providence morning. I’m not in Indonesia, going native with the Asmattan tribe and their traditional reliance on plump sago grubs. I’m not in Mexico, respecting the ritual consumption of jumiles, a local variety of stink bug. This is not a dare. I’m not drunk.

Oh no. I’m stone cold sober, and that’s a big bug on that plate.

“Don’t worry,” Gracer says, reaching for a paring knife. “This is a flying bug, so it’s got muscles.” And with the expedient dispatch of a butcher, he flips the dead water bug on its back and sets the knife blade to where its head and body meet. “Listen,” he says, and a soft but sharp crack announces that we’re dealing with this bug more like a lobster than a bar snack. He pries his thumbs into the gap and breaks the breast-plate open. There’s meat in there. I eat meat. Maybe I can do this.

Gracer picks out a tiny bit of water bug meat with his knife-tip and sets it out for me. It’s the size of a pea, the color of putty. I put down my cicada, wings, antennae, and all, and try the water bug. On my tongue, the brine it’s been preserved in announces itself, then yields to a perfumed sweetness that evokes tropicality. What is that flavor?

“Well, some have likened it to a weird Jolly Rancher,” Gracer says, popping his own tiny mouthful of giant water bug.

This is an informed opinion. For the past seven years, David Gracer has made a concerted study of entomophagy with the passion of a Victorian naturalist. Which means not only does he know a lot about eating bugs, but he’s eaten quite a few himself. An English instructor, Gracer spends his off hours networking with academics, from entomologists to anthropologists, collecting extensive writings on a practice that thrives in cultures worldwide. He travels to conferences, including a recent one in Southeast Asia, gathering more entomophagical ballast. He has ethnic markets acquiring foreign bugs for him. He’s working with locals to grow bugs for him. This past summer, he was on the road, doing demos in more than thirty Rhode Island libraries, as well as traveling the United States with a film crew from Animal Planet.

A sort of Anthony Bourdain of the bug circuit, Gracer will not only visit with insect harvesters and potential consumers, but he’ll maintain a diet of vegetables, grains and insects for a full month. The working title? Insectisize Me.

At the center of this hive of activity: Sunrise Land Shrimp, Gracer’s fledgling company that he hopes will become a commercial conduit linking providers and consumers who see the value in eating something with more than four legs. All from a guy who was a picky eater as a kid. “I used to tell people I was allergic to chicken,” he says, to avoid anything beyond hot dogs, grilled cheese, and butter and jelly sandwiches. But the young Gracer was also a nature nut, hanging out at a preserve near his home in Yorktown Heights, New York, where he volunteered and would talk animals with anyone who stood still long enough. This adventuresome streak got the upper hand, and after a post-collegiate introduction to sushi, Gracer got crazy for exotic fruits, then unusual meats such as alligator, ostrich, moose and bear. After moving to Providence in 1996, Gracer fell in with local mushroom hunters, learned a puffball from a shaggy mane, and became one of the harvesters who supply unusual fungi to the city’s best restaurants.

Once you find yourself rooting among decaying timber, can grubs be far behind?  Evidently not. On his birthday seven years ago, a friend gave Gracer a case of meal worms called, cutely, larvets. Gracer dug in. “They weren’t good,” he confesses about the beetle grubs in a box. “But something struck a chord in me.” 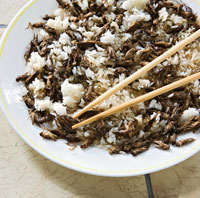 The chord Gracer hears is America chewing its way into disaster. Reliance on meats such as beef requires vast quantities of water and other resources to produce the millions of mouthfuls we consume each day. To look closer at a more efficient form of protein, one crawling around by the billions all over the planet (and easily raised in any basement, Gracer says), will not only expand our appreciation of what our fellow humans value and consume in other cultures, but will create greater awareness of how we might eat more harmoniously with our planet.

Think of insects as the culinary equivalent of bamboo. Or biofuel. Think of insects at all, in a way other than as a scourge to be avoided, or an enemy to be eliminated, and David Gracer feels like he’s put in a good day’s work. Now, if he could just get them to, well, taste a little better.

“If I get them to try a bug, most people say, ‘that’s not so bad,’ ” Gracer says. “I want to prepare them in a way that someone will say, ‘Oh my God!’ ” Admittedly, the dry roasted crickets and cicadas we’ve tried earlier are little more than tricky chewing and dull flavor (unless you count the savory dust they’ve picked up from being stored in a Mrs. Dash spice jar). But that sauteed cricket tastes, yes, like chicken. And a sauteed cicada has a smoky overtone that begs for a cold beer. After our cracked water bug, Gracer pulls a special bag out, much as a wine connoisseur reaches for a rare vintage. We share chapulines, Mexican grasshoppers roasted and dusted with what must be chipotle. Tasty in the moment, but would bugs stand up to standard appetizer fare? Can a chapuline whup an onion bloom?

Gracer has worked insects onto a few restaurant tables here in Providence: La Laiterie served insects at the bar last Halloween, and Blue Elephant has delicacies like silk worm chowder, cricket kebobs and Thai water bug creme brulee as a regular part of the menu. The hip Liberty Elm Diner in Elmwood has offered bread made with cricket flour, which is 100 percent dried, pulverized crickets. The bread is amazing; darkish like a rye, it’s nutty on the tongue and leaves a savory aftertaste like parmesan. Liberty Elm’s baker, Judy Gonsalves, plans more experiments with the cricket flour, from oatmeal cookies to carrot cake. “People hear about it and want to try it,” she says.

Which must mean David Gracer is slowly winning the hearts, minds and taste buds of traditional carnivores. Meanwhile, there’s more networking to do. Some entomology students in Chicago sent him some cicadas, he’s working a deal to score another harvest of Queen Leaf Cutter ants from a woman in southern Texas, and he’s keeping up a relationship with a park ranger in California who sent him kutsavi, or brine fly larvae. News stations call, and he takes off with bags of quarry to cook up a little something for the next curious adventurer. It’s a long battle, but David Gracer seems somehow just right for it.

After a trip to his basement to see a freezer stocked with frozen crickets, he pulls out another study in patience and perseverance: an epic poem he’s spent eleven years working on—now at 330 pages and 10,000 lines, single-spaced. In it, the main characters struggle to maintain themselves in a world diminished by their own voracious appetites.
They are, of course, termites.

For more information on Sunrise Land Shrimp, go to slshrimp.com.