How the Misquamicut community banded together in Superstorm Sandy’s wake.

Erin Swanson
It’s like a war zone,” says one onlooker as she shakes her head back and forth in quiet disbelief. “I was born and raised here. This beach is my whole life.” Standing in what feels like quicksand, I turn my eyes out to the sea; the howling wind is deafening and the waves slap viciously against the shore. Atlantic Avenue has disappeared, its pavement buried by nature’s wrath. The man to my right furrows his brow, surveying the damage. “This isn’t the Misquamicut I know,” he says. “What a shame.
The oceanfront community has been thrust into uncharted territory, forced to weather a storm of historic proportions. But for the occasional back-up alarm on a construction vehicle or the ping of a shovel hitting rock, an eerie silence looms in the streets in the first few days after Hurricane Sandy violently attacked the coast last October. In the weeks after the squall subsided, stillness is replaced by clamor as folks eager to help the affected property owners hoist cement blocks, shovel sand, unearth concealed stairways and fill dumpsters with debris.
I shiver and cross my arms a bit tighter, wondering how those around me could work in such freezing conditions without complaint. It is a stark contrast to my barefoot summers on the very same beach, enjoying seafood out back at the Andrea Hotel, sangria on the deck at Paddy’s Beach Restaurant and live music at the Windjammer Surf Bar’s patio. Sadly, all three of the seasonal hot spots are left covered in giant mounds of sand and reduced in parts to rubble.
Despite the reality of the situation, everyone I speak with on repeat visits to Misquamicut maintains a fire of determination. All eyes are on the prize, that one goal they share in common: to rebuild in time for the lucrative tourist and wedding season. But can it be done? The town is doing its best, but navigating the FEMA ropes is a learning process and the paperwork seems insurmountable. Without building permits, there isn’t much the business owners can do but hurry up and wait. Put simply, the heat is on. The rush is tangible.
Sally Sorensen manages the Windjammer Surf Bar at 321 Atlantic Avenue. Along with Atlantic Beach Park, Windjammer has been in her family for three generations since 1921. “I’ve worked here since I was twelve years old,” she says. “I grew up here and I’ve heard so many stories from so many people over the years about how this place has been a huge part of their childhood as well.” The Windjammer has survived quite a few hurricanes, including Carol in 1954. 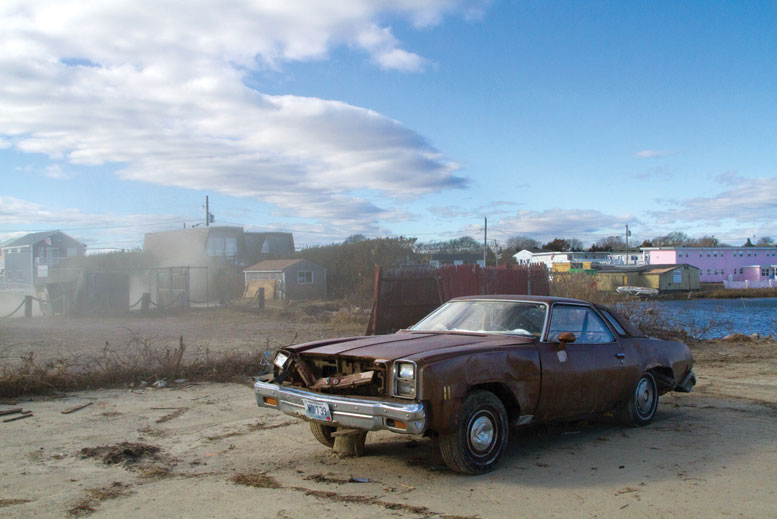 Inside the Windjammer, the disco ball still hangs from the ceiling; it has lost most of its shine. Two men in the front room operate power drills that intermittently drown out their portable radio. “No storm has ever moved that amount of sand,” Sorensen says, straining her voice above the din. “The storm broke up the cement patio on the ocean side of the building and water carried the cement pieces into and through the property. They acted like wrecking balls and blew through both sides, taking everything below four feet with it.”

To read more of this story please visit your nearest newsstand or click the link below.