The Alex and Ani Ladies Day fashion show and Champagne brunch at the International Tennis Hall of Fame in Newport featured beautiful summer styles by Fila, Brooks Brothers and Alex and Ani. 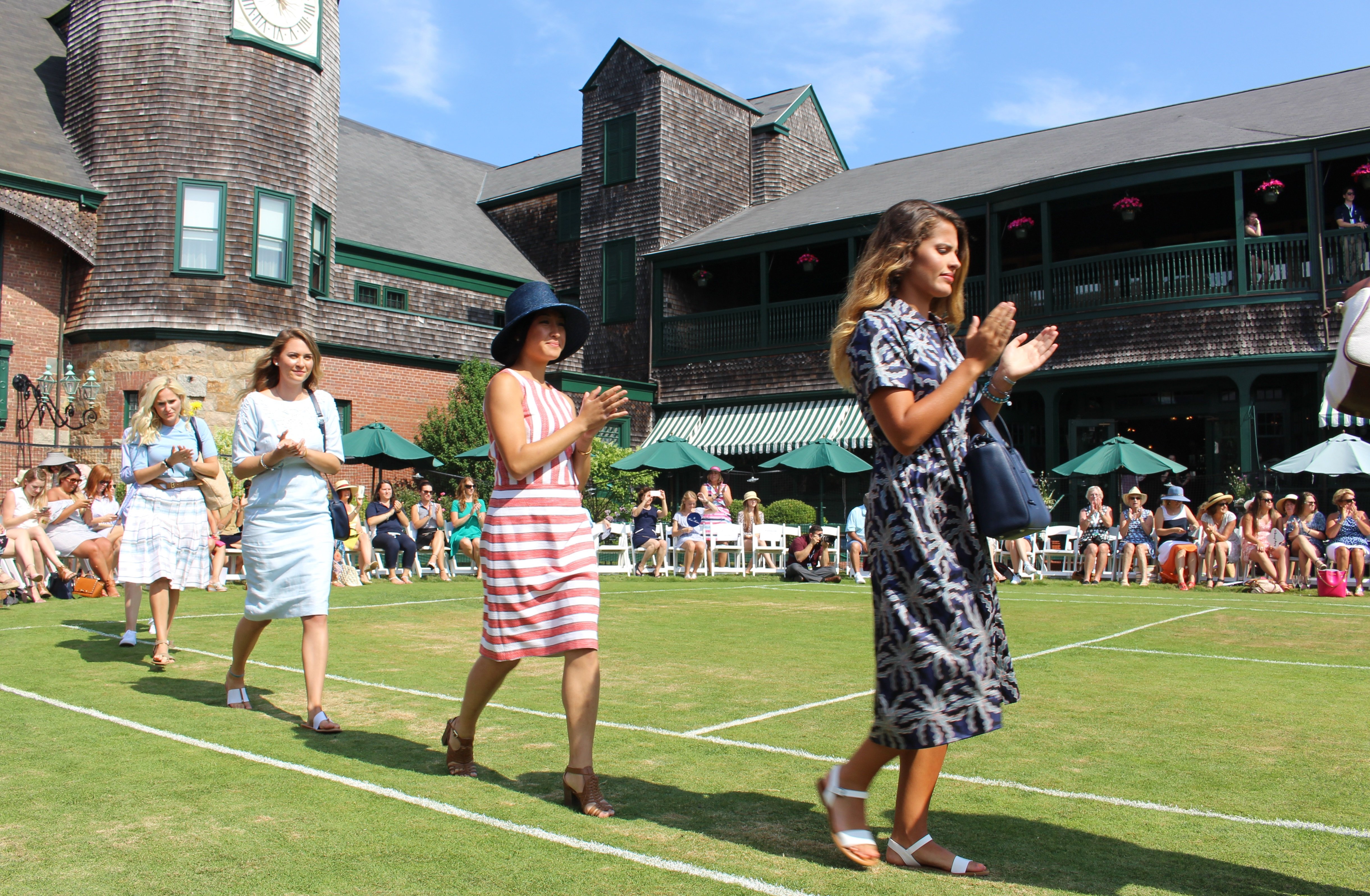 The annual Alex and Ani Ladies Day fashion show and Champagne brunch, held July 20 at the International Tennis Hall of Fame in Newport, featured beautiful summer styles by Fila, Brooks Brothers and Alex and Ani. Many of the looks are still available at neighboring stores in Newport or online.

The morning started off with a runway show on the Hall of Fame center grass court, where models wore tennis apparel and sportswear from Fila, followed by beautiful summer whites, dresses and other looks from Brooks Brothers. They also showed off bangles and other jewelry from Rhode Island-based Alex and Ani. Tennis celebrities such as Sam Groth, John Isner and former world number one, four-time Singles Champion and 2017 Hall of Fame inductee, Kim Clijsters, walked the runway.

The fashion show was followed by a Champagne brunch where guests mingled over drinks, quiche and fresh fruit, wearing their summertime best and big floppy hats. Alex and Ani Ladies Day was part of the week-long, Dell Technologies Hall of Fame Open event, which also included the International Tennis Hall of Fame Class of 2017 induction. That weekend, Clijsters was inducted along with several other tennis greats, including Andy Roddick, Monique Kalkman van den Bosch, Steve Flink and Vic Braden.

For the fashion show, Clijsters sported Fila’s special tennis apparel collection which was made to honor her induction. The outfit was adorned with hundreds of small decorative stars paying tribute to her stellar career. Four of the large stars featured the outline of a tennis ball to highlight her four Grand Slam singles titles. 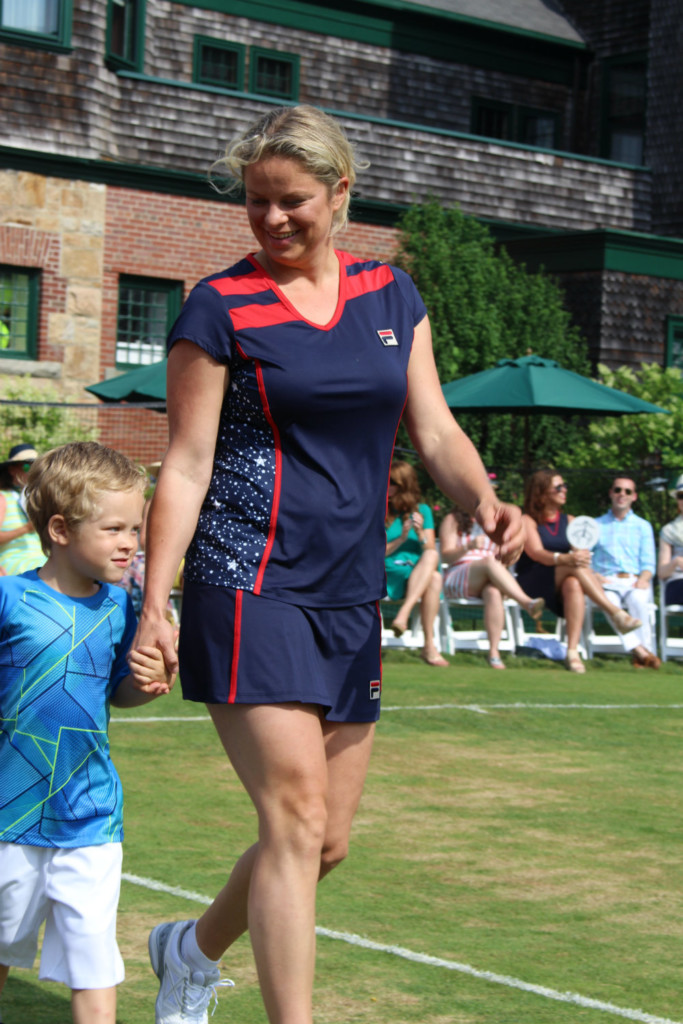 When speaking with Clijsters, she stated that she enjoyed the time spent in Newport with her family and she was looking forward to catching up with people, including the 2003 U.S. Open tennis star, Andy Roddick.

See below for some of our favorite photos from this year’s fashion show! 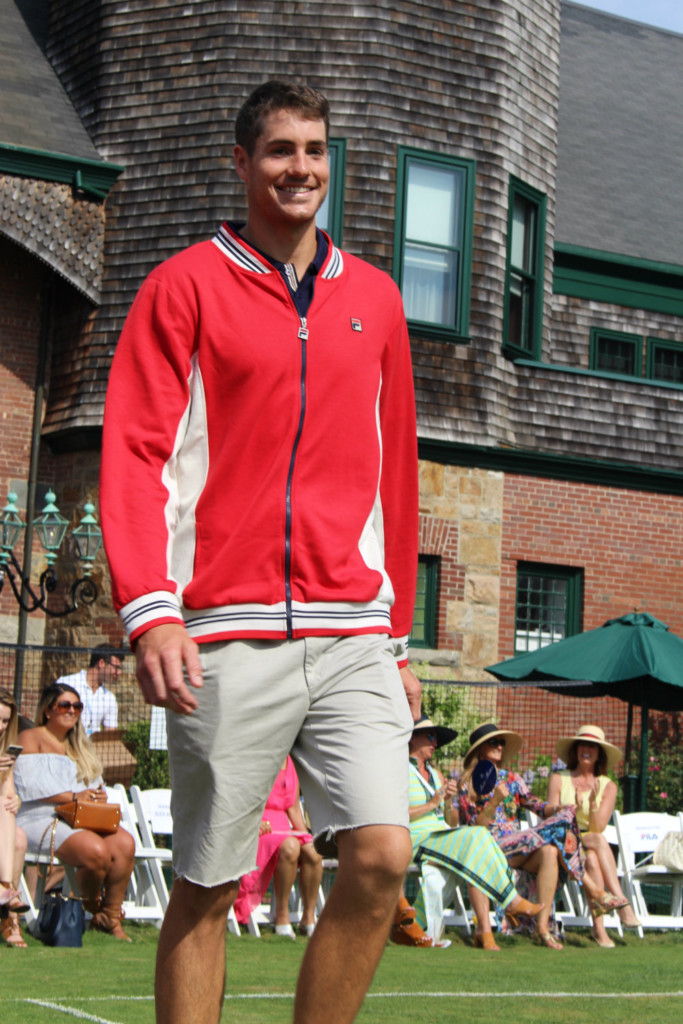 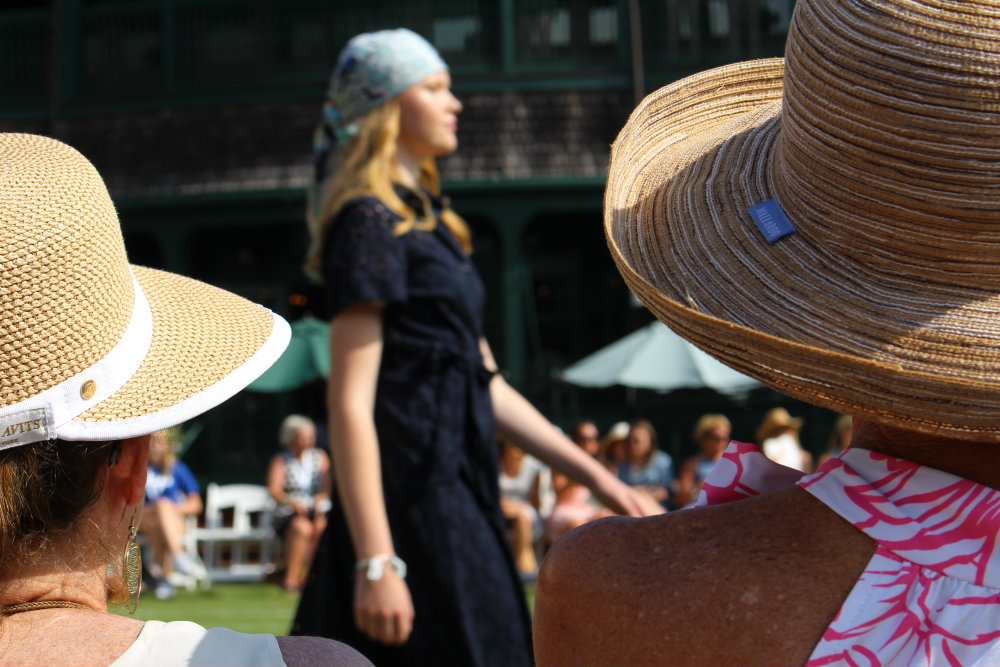 A model is seen wearing a navy dress and a head wrap from the Brooks Brothers summer collection. 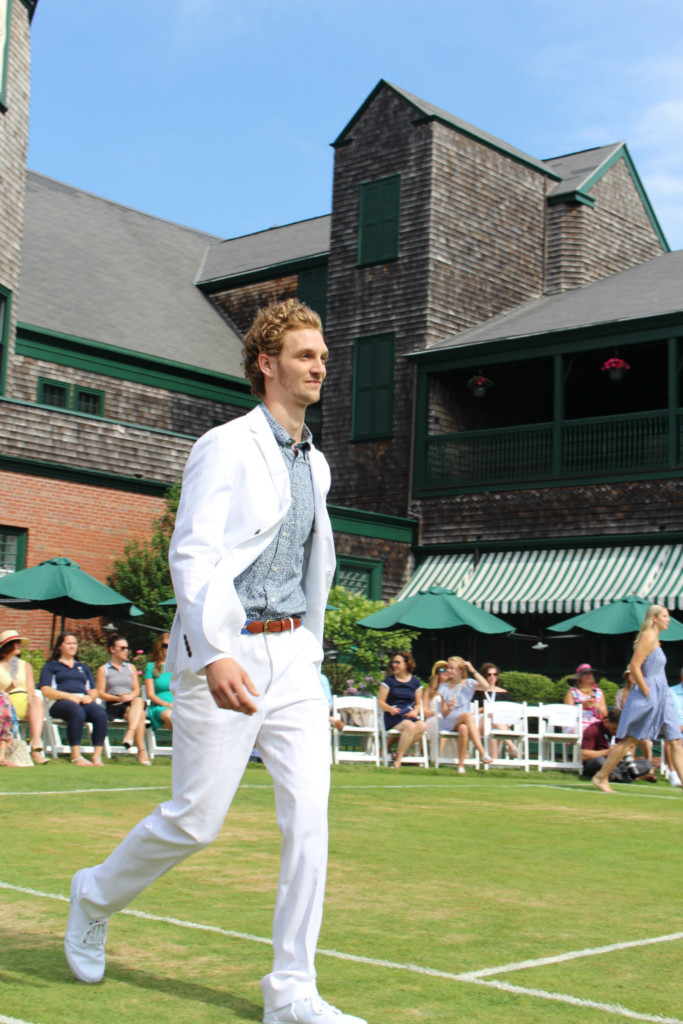 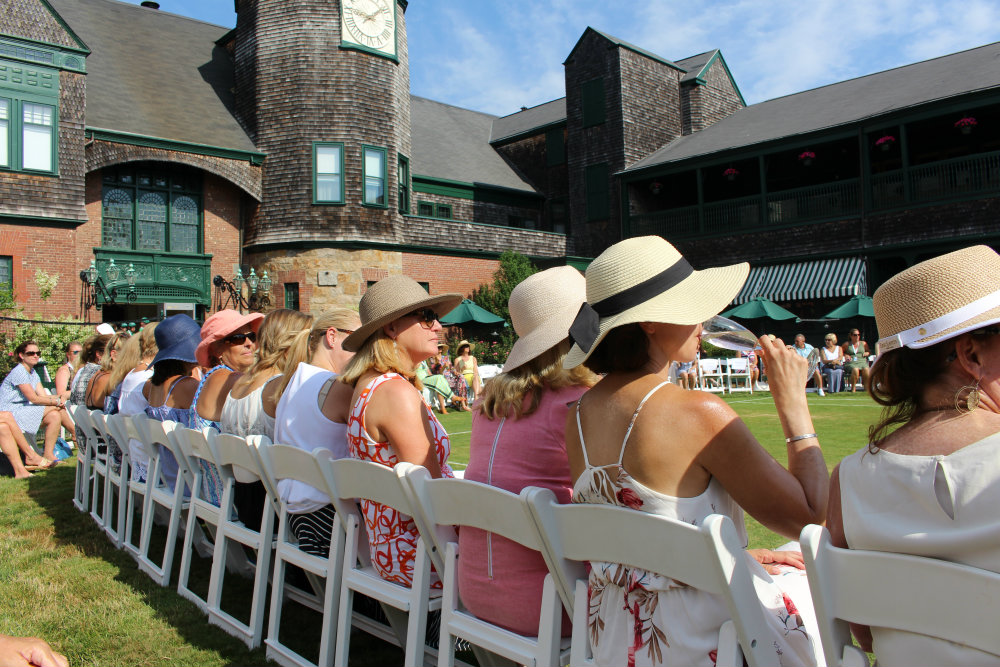 Women seated around the grass court wore floppy hats and sipped Champagne to stay cool during the fashion show. 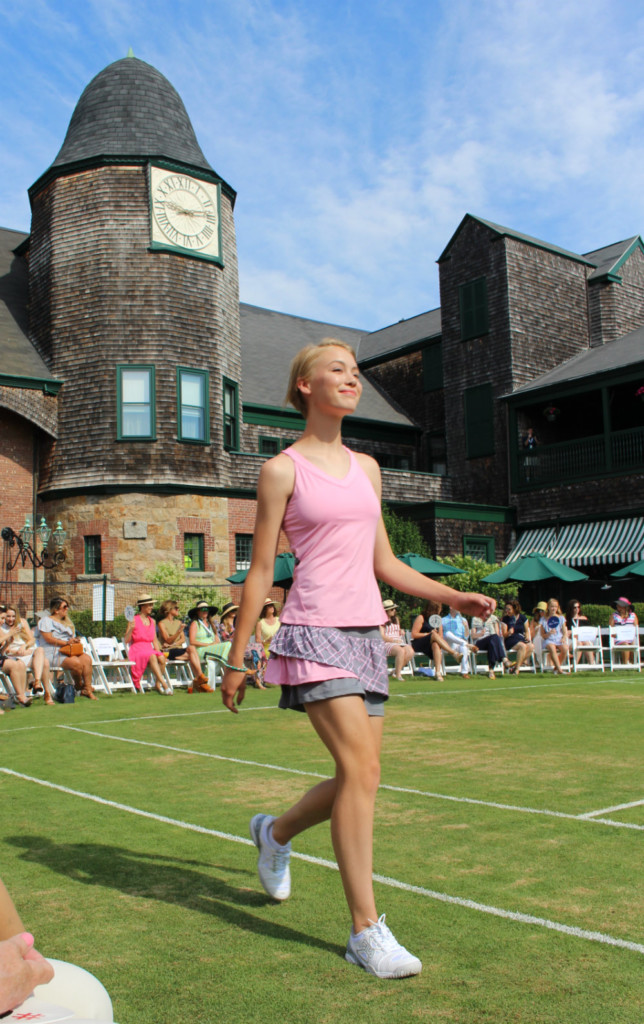 A model shows off pink and gray tennis apparel from Fila with Alex and Ani accessories to complete her look! 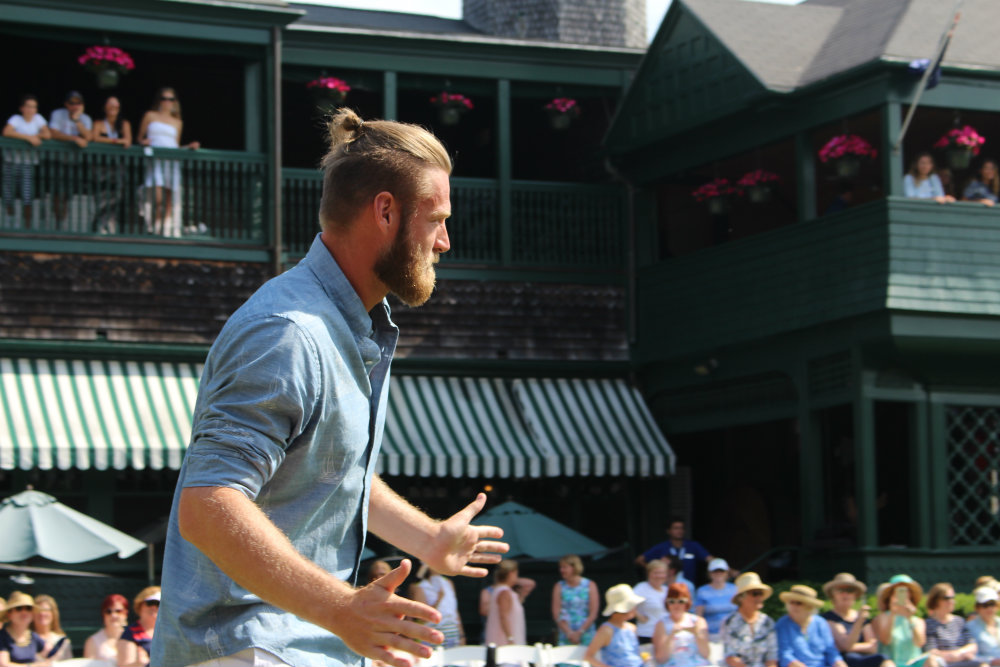 Tennis player Sam Groth breaks a dance move for the crowd as he makes his way around the court wearing Brooks Brothers clothing. 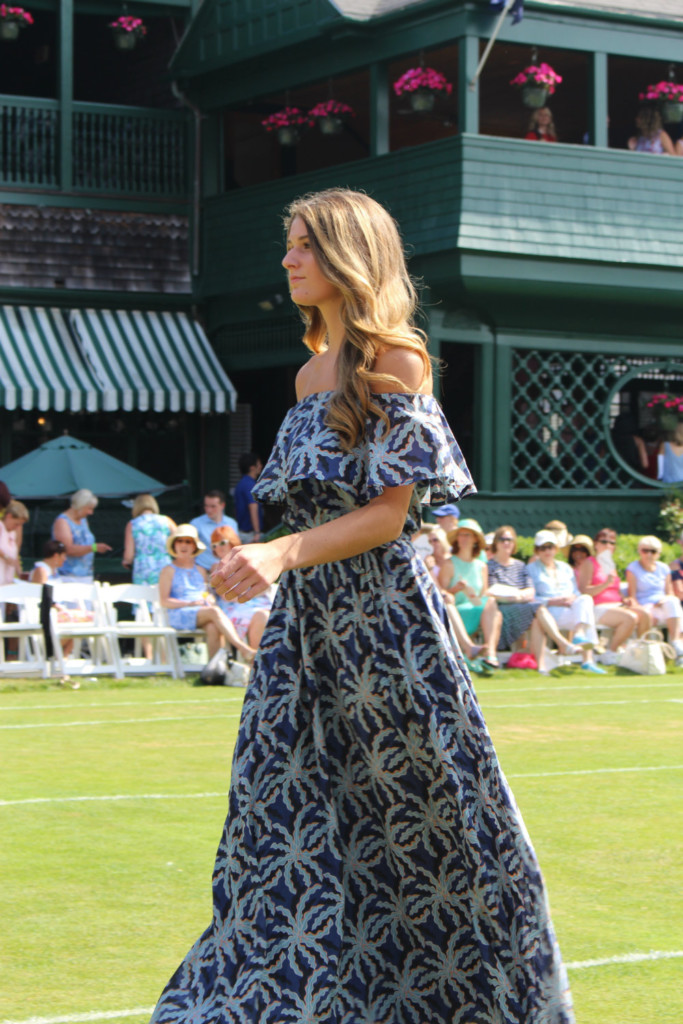 One of my favorite looks from the show was this long navy patterned maxi dress from Brooks Brothers. 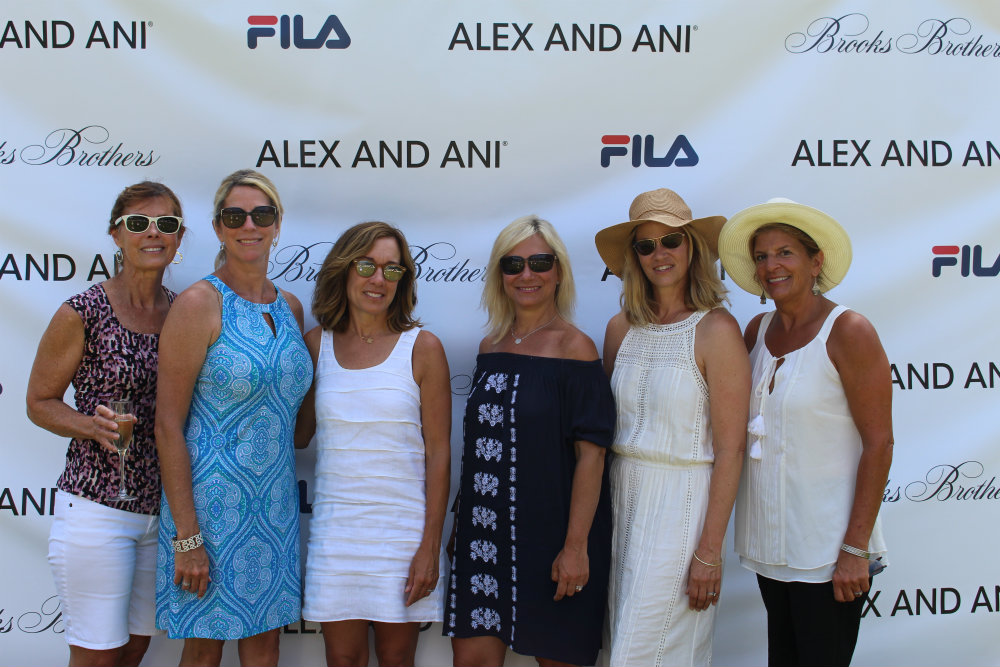 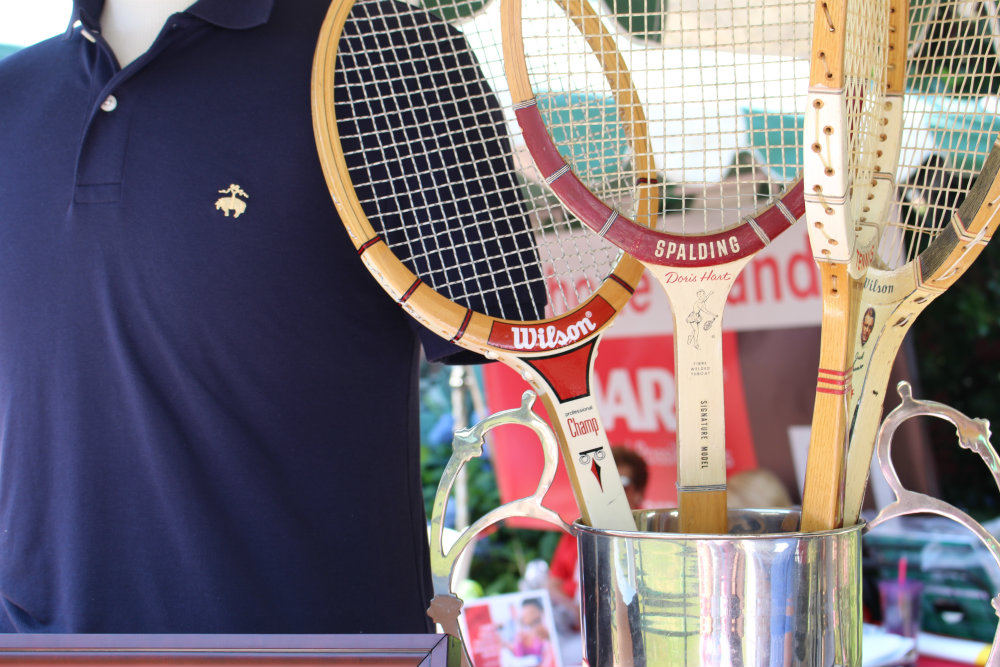 Brooks Brothers’ pop-up tent was decorated for the occasion with summer styles and tennis gear.