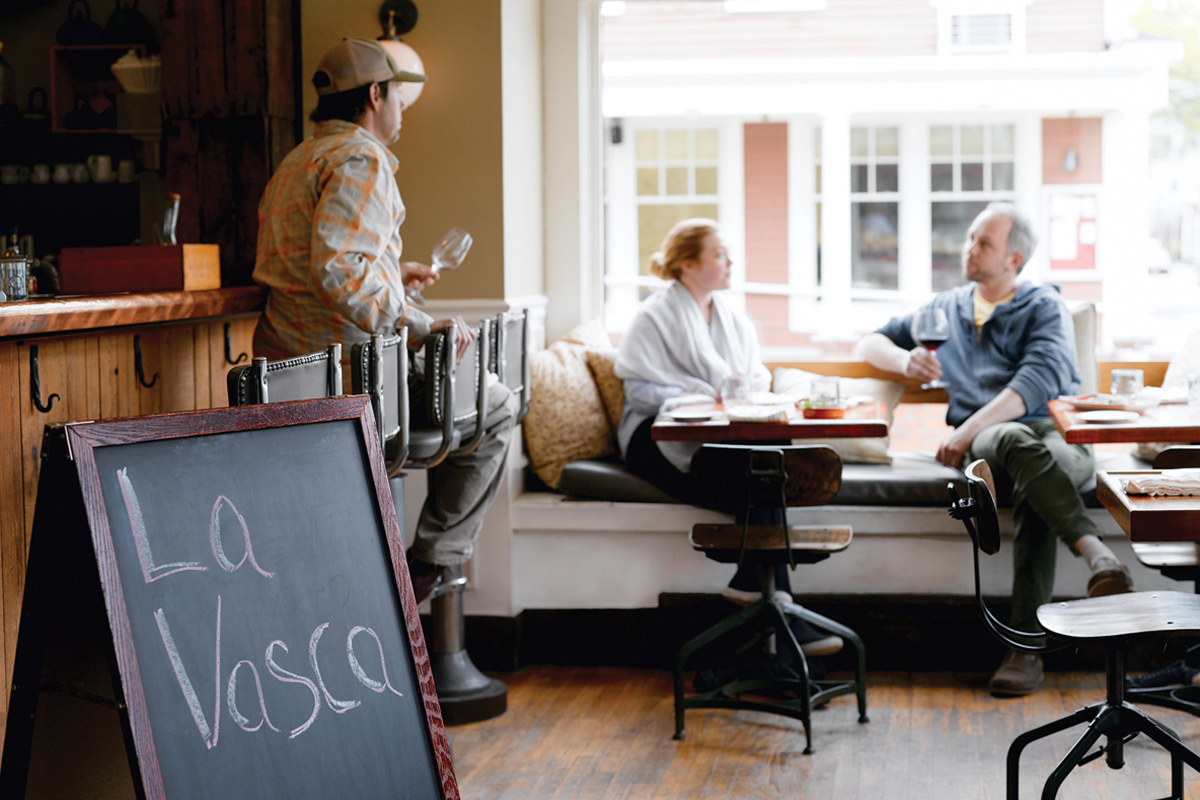 But how radical is the transformation? The interior, industrial shabby chic in hues of rose and sage, remains exactly as it was and key elements of the farm-based approach simply shift into more far-reaching geography.
The portions may be smaller and manchego may make a bigger mark, but La Vasca is still an artisan dining destination that transforms the experience of eating into euphoria.

In temperate weather, the door is kept open and the staff calls out to local residents and neighborhood pups by name. Service is not a practice here as much as the pull to create pockets of comfort in every corner.

La Vasca serves only wine and beer but the ice is still hand cracked and the sangria is poured in massive goblets full of cubes to break the summer heat. It’s curious to see eight people crowding the small open kitchen, but preparation is mindful and each diner is greeted with an amuse bouche in anticipation of a well-paced meal.

Dishes fall into two categories: the bright and the smoky. The former is manifested through a superb set of seafood dishes including flash-seared tuna with microgreens and a shower of charred shallots ($18), giant shrimp ($3.5) grilled and served with a lime-heavy Thai chili sauce, and scallop ceviche ($14) marinated in an equally citrus-heavy melange of peppers. It may be impossible not to clean your plate and equally challenging to leave even a speck of vivid sauce on the dish in closest proximity.

The flipside to La Vasca’s bright personality is in the earthy meats — Iberico, serrano, chorizo, each one showcasing curing that distills the pronounced flavor of salted pork.

Housemade chorizo is coarsely ground and paired with sweet peppers while beef and pork meatballs ($9) coated in smoked tomato sauce, beg for some toasted bread with olive oil.

Each version is a perfect foil for seafood, proving in each bite what makes Spanish food so exhilarating: the juxtaposition of land and water.

If tables are tucked tightly together, all the better to ogle the dishes delivered next door.

“We got the grilled sardines,” says a good-humored couple to several peering eyes as the scent moves across the room. “But we are willing to stab you with a fork if you try and steal them.” Fair enough.

Crowell often oversees the dining room throughout the evening, intent on making sure the sense of community that defined Stoneacre remains at La Vasca. He delivers coffee or citrus granite to cleanse the palate and recommends a bite of something sweet if there’s room.

The hazelnut pudding — a holdover from Stoneacre — remains a perennial favorite but it’s the gateau Basque that defines dessert. “It’s like a cross between cake and pie,” says one server.

But it’s more than that. Simple, classic and elevated, it’s exactly what La Vasca  is after — and enough for one diner to claim she is running off to the thin line between France and Spain and never coming back.

515 Thames St., Newport, 619-4899, lavascanewport.com
Wheelchair accessibility is negotiable but tight. Street parking.
Capacity Thirty plus.
Vibe The space is homey but the horizon expands on the plate.
Prices Tapas run $6–$18, platters of paella are $24–$36.