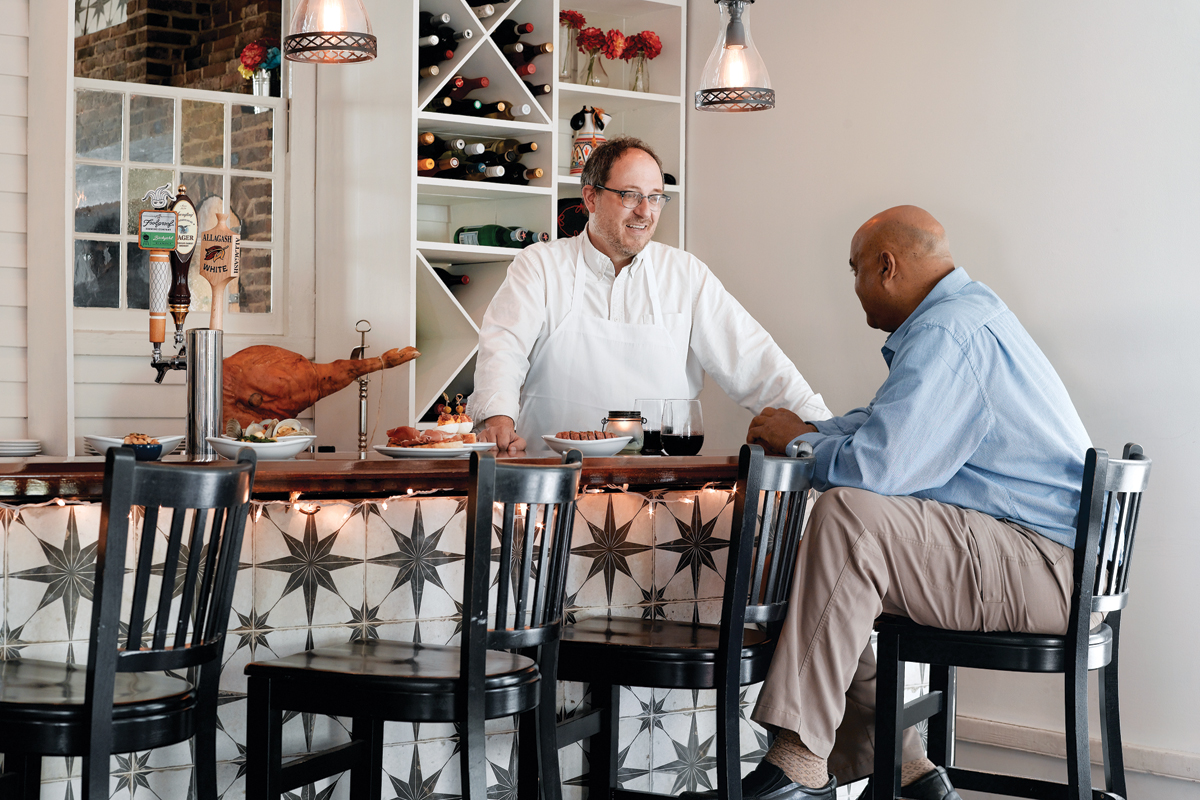 The streets of Rhode Island are lined with history. Clapboard, brick, stone and shingle all tell the centuries-old story of settlers building a new nation intent on forging its own identity. It’s perhaps surprising that an eighteenth-century Colonial that eventually became the Nathaniel Porter Inn, would house Merienda. (The founding fathers weren’t known for pushing a Spanish agenda.) But oddly, when the wide-planked floors, dark timber ceilings and interior windows are punctuated with string lights and candles, they take on a hacienda air — all relaxation and repose. Even the heavy wooden bar evokes Hemingway sitting in Cuba, trading stories over hours worth of drinks.

It’s a charming space, in certain corners irresistibly romantic, with candles dripping languidly in the fireplaces. Not a bad spot for an ode to garlic and ham, which is where Merienda’s affinities lie. Though there are some cicchetti (snacks) –— manchego and quince or fried almonds — the hot tapas are well suited for the moody space. Gambas al ajillo, a quartet of sauteed shrimp ($9), is a garlic bomb. (“We don’t do essence,” says one server. “We go big.”) But it pairs well with the mellow albondigas ($6), cinnamon spiced meatballs that one diner described as “the first thing Yankee Candle should serve if they open a restaurant.”

Nothing is complicated at Merienda, but everything evokes a sense of the past, of the dishes that were long ago new and now familiar favorites. Deviled eggs ($2) are piquant with strips of Spanish ham, brought to the table on wedges of bread that, chilled, are more for balance than consumption. But once those wedges are char-grilled and topped with crushed tomato and ham ($6) — or a chunky spread of tuna with peas ($5) — it typifies the style by which Europeans rule the sandwich world.

There are no grand platters at Merienda — no trays of paella or shellfish. In fact, the most memorable bites are the smallest. If the goal is simply to sit by the candlelight with a glass of Rioja, it’s imperative to chase the wine with a skewer of bacon wrapped dates ($6). Diminutive and cooked until candied, it’s the archetypal snack, a single bite of Spanish influence crossing the American border. That it landed in a 200-year-old house saturated with stories of expatriates is more cultural collision than conflict, and proof that European ethos is ready to be uncorked.

125 Water St., Warren, 310-0501, meriendawinebar.com
Wheelchair accessibility is a challenge in an eighteenth-century house. Lot parking.
Capacity Fifty seats in a spacious setting.
Vibe Benjamin Franklin tells the founding fathers what Europe is really like by feeding them a meal.
Prices $6–$9.