1. Clothes Horse Clothing is designed by Barrington native Bianca Jones, who earned her BFA in Ceramics and Art Education from Rhode Island College. This collection channeled the urban hippie in all of us using pastel yellow, pink, gray and white floral patterns in satin-like material coupled with furry pink, blue and gray vests and jackets. The designer focuses on sustainable, zero waste, vegan garments. 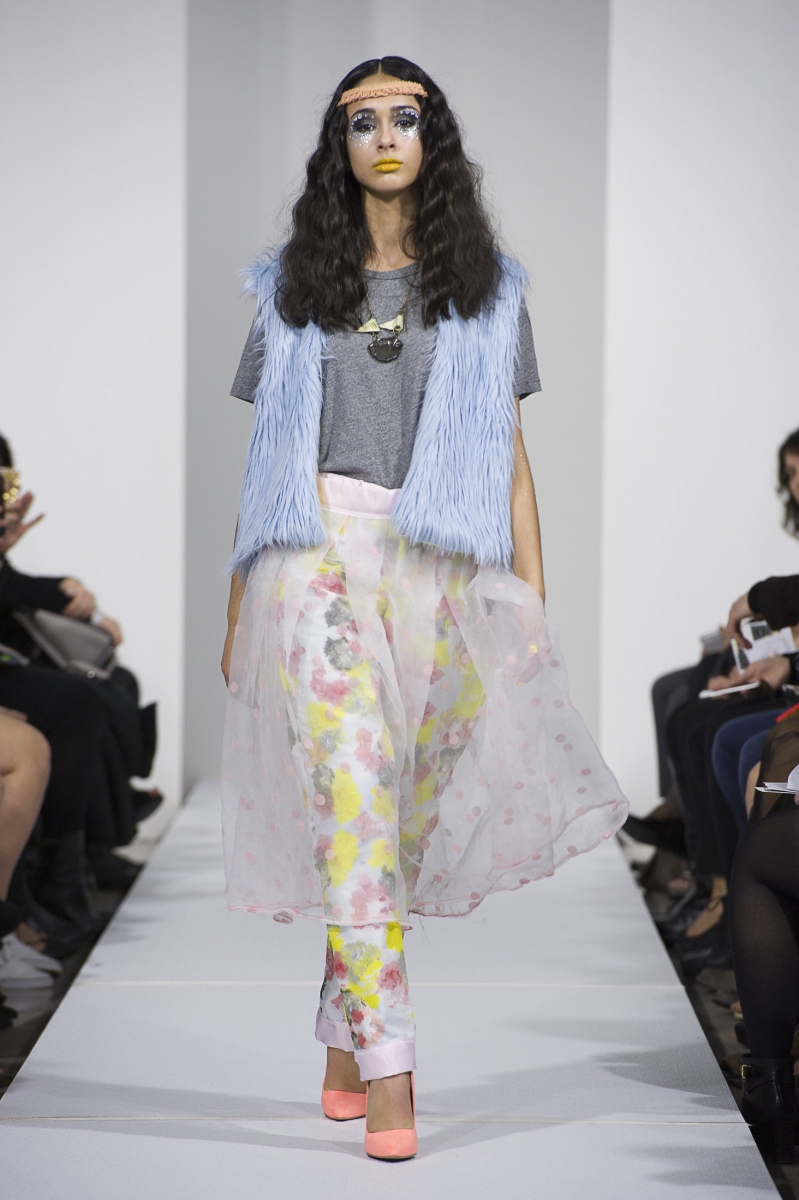 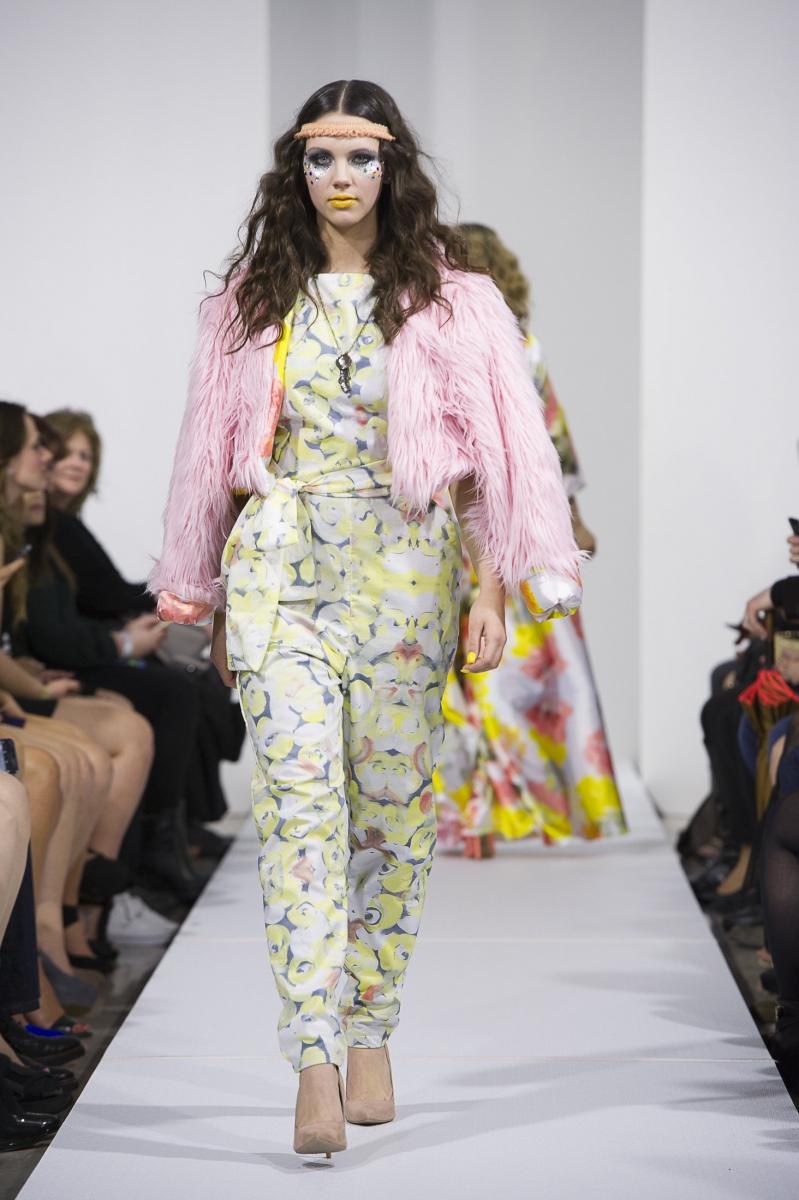 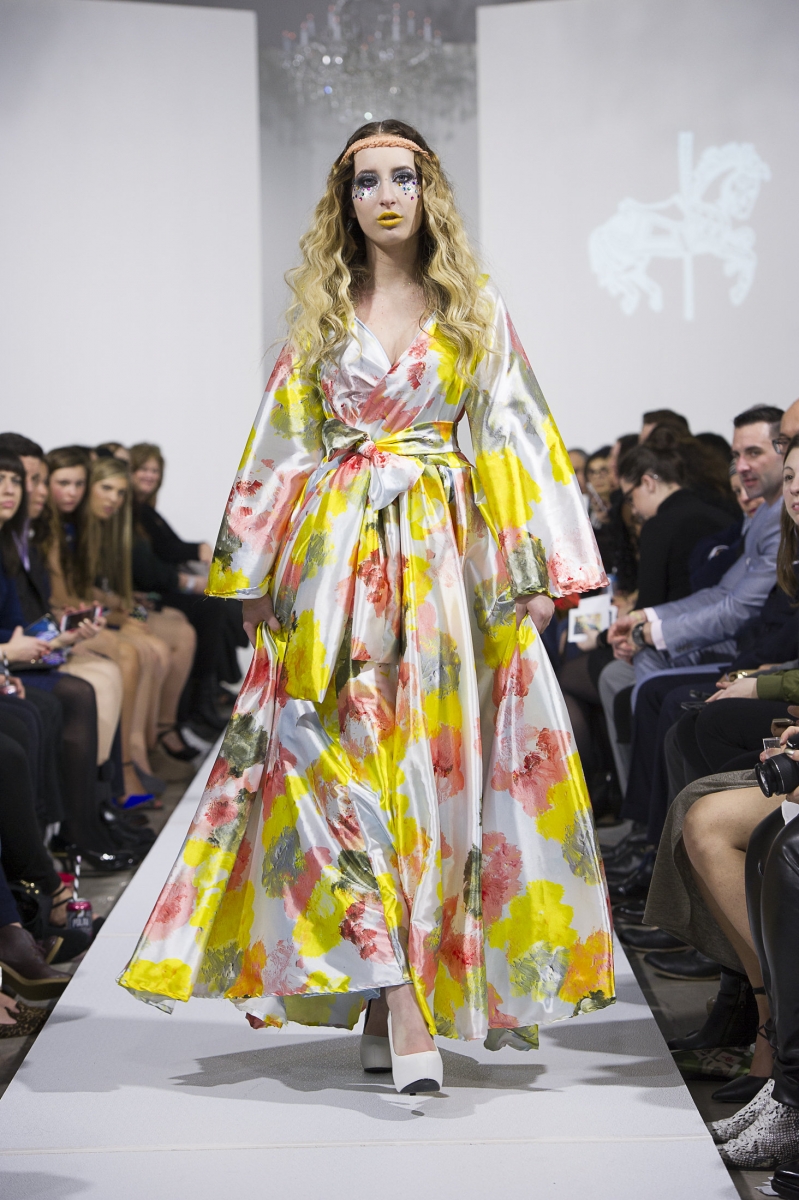 2. Tangoella by Ella Tang created beautiful cocktail attire that could be worn with a simple cardigan or jacket to go from work day to nightlife. We loved the brocade fabric and bright red lacy textures. Her designs are versatile and timeless but with an edgy side that shows you have style. Tang graduated from School of Fashion Design in Boston. 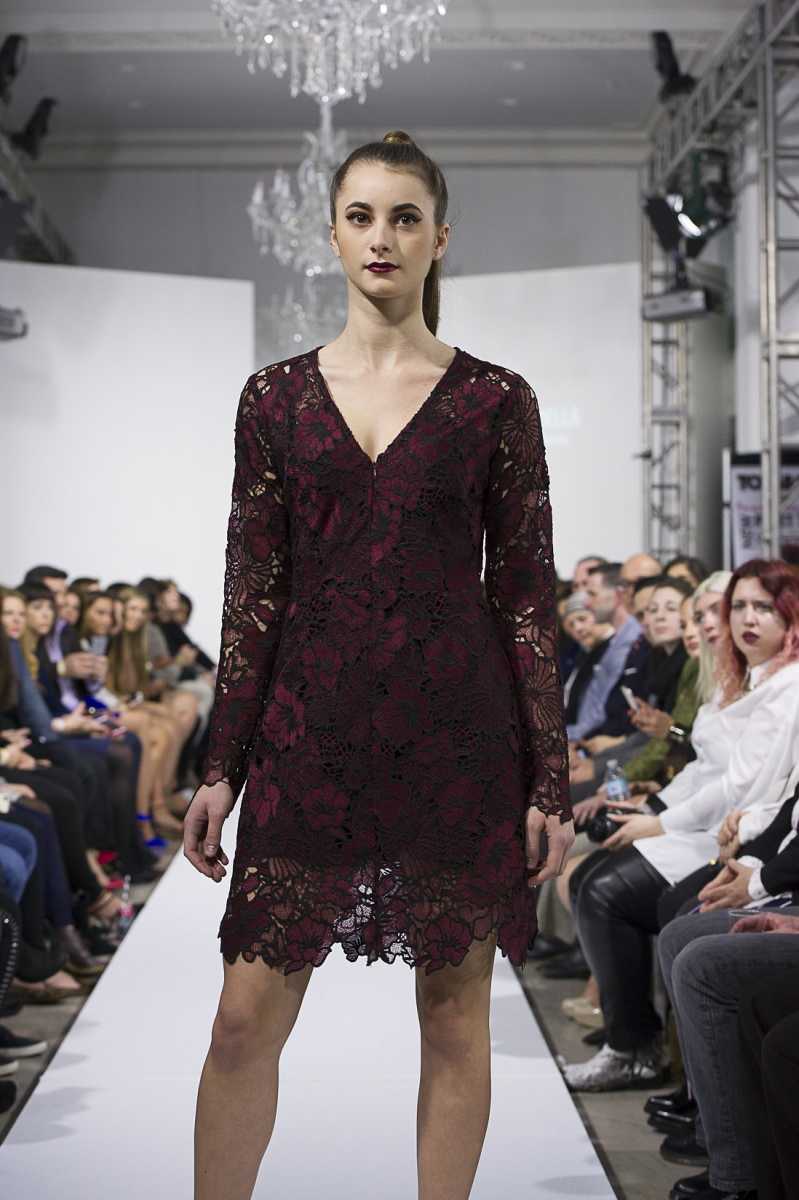 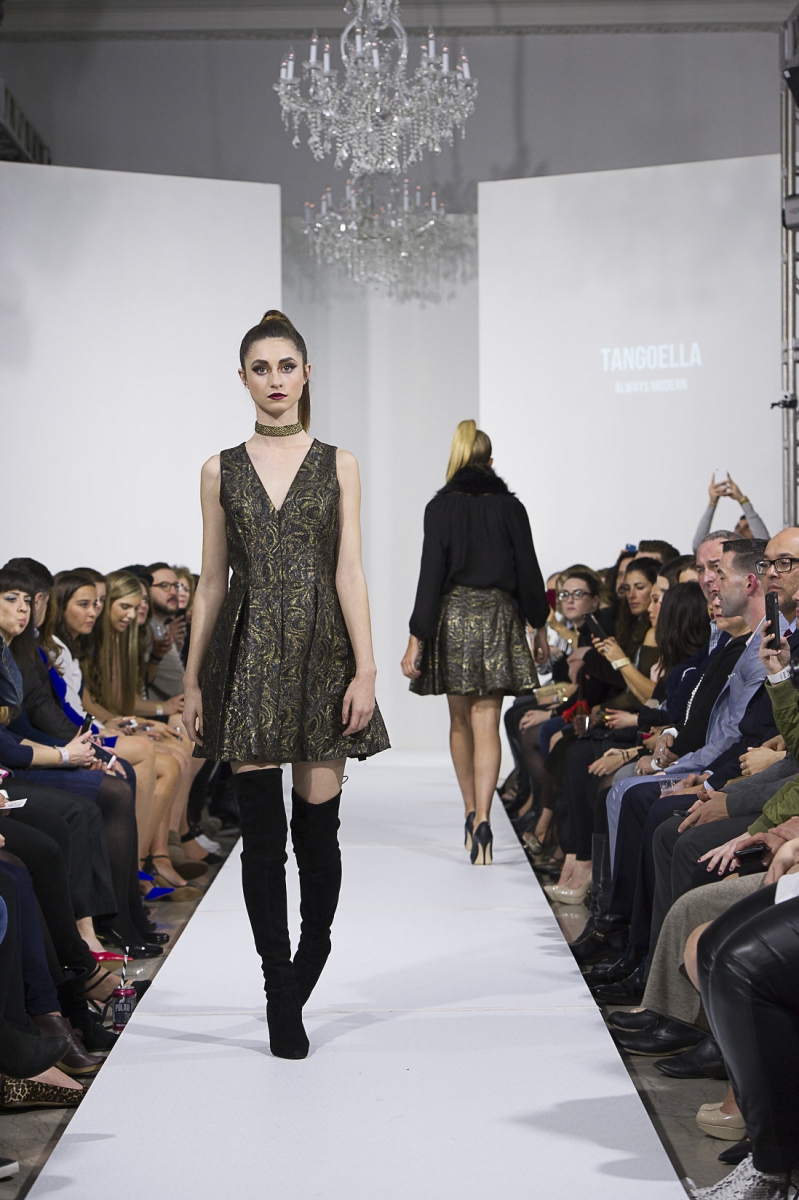 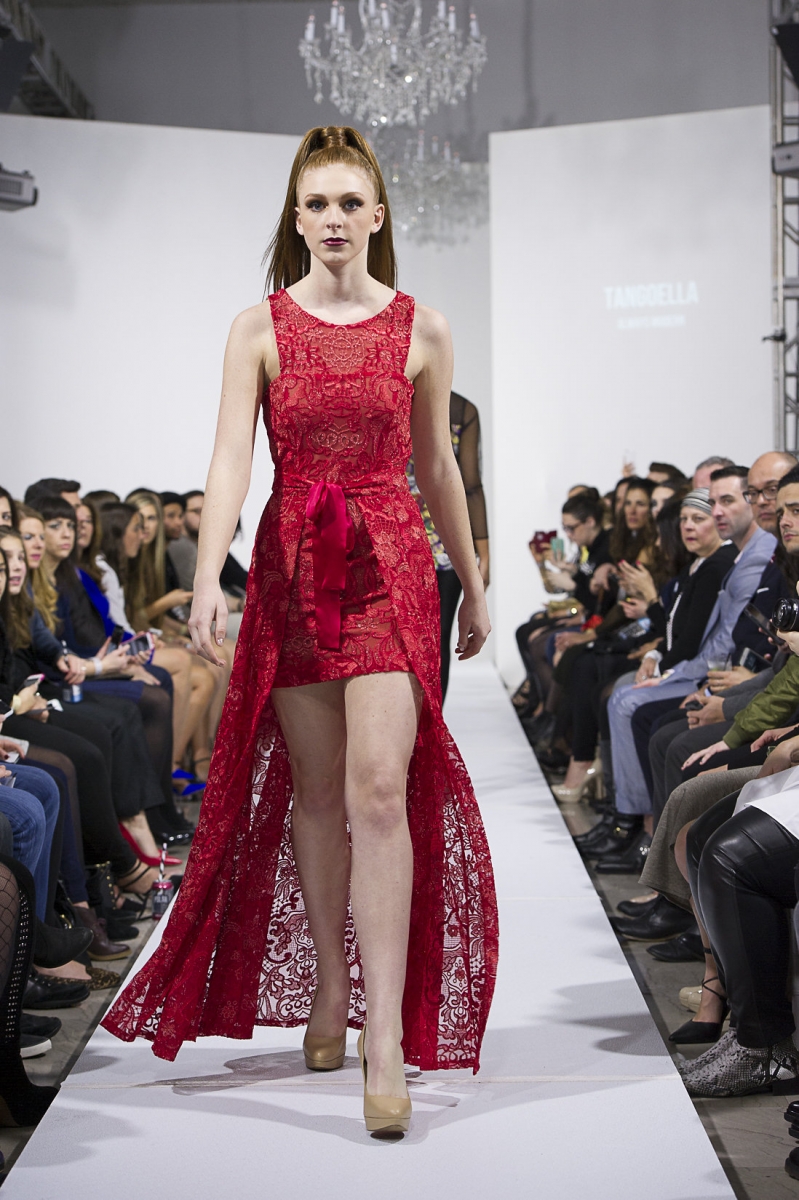 3. Devinto is an eco and ethically conscious label established in Montreal, Canada and relocated to Cape Cod, Massachusetts. The designer, Aiste Zitnikaite, is from Lithuania but moved to Canada and studied fashion design at LaSalle College in Montreal. Her collection was is designed and produced locally on Cape Cod using natural and eco-friendly fabrics featuring figure-hugging silhouettes in contrasting black and white. 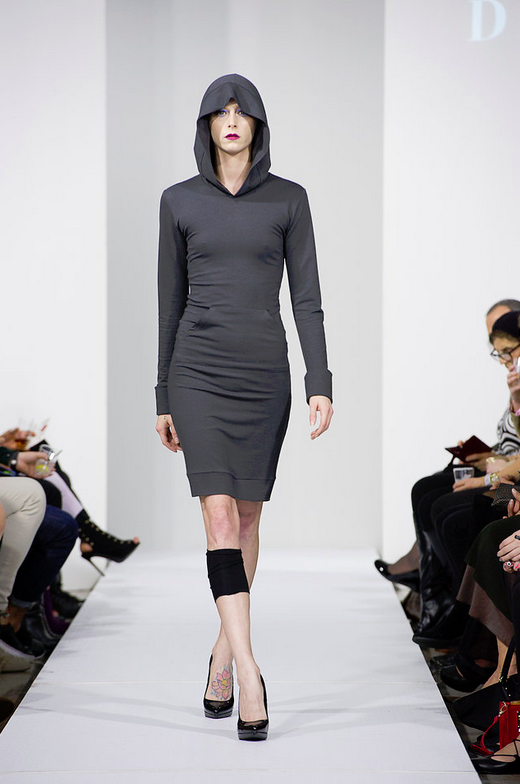 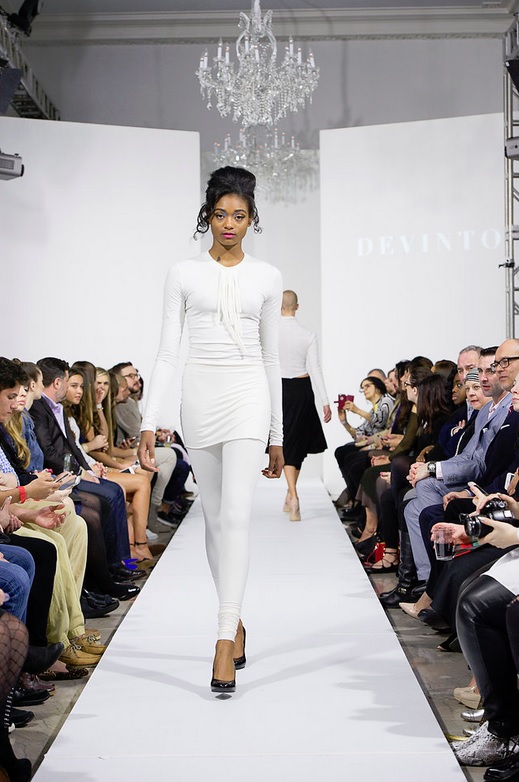 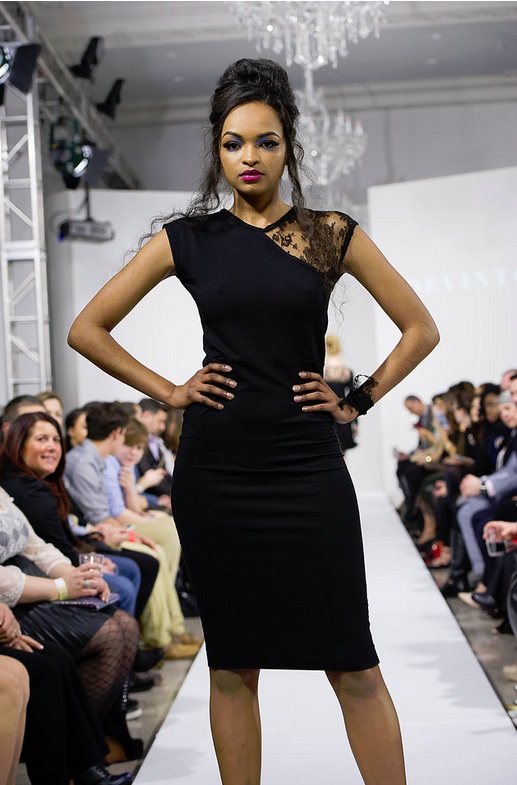 4. Colette Chrétien is the designer of La Fille Colette, based out of Boston. She graduated from Tufts University, and was dual-enrolled at the School of the Museum of Fine Arts, Boston. The La Fille Colette collection involved simple black and white cocktail dresses and full-length gowns with high slits and cut-out detailing around the shoulders and arms. She also used a bright green floral pattern that is worthy of daytime dressing. Her garments are made in the United States on Cape Cod, Massachusetts. 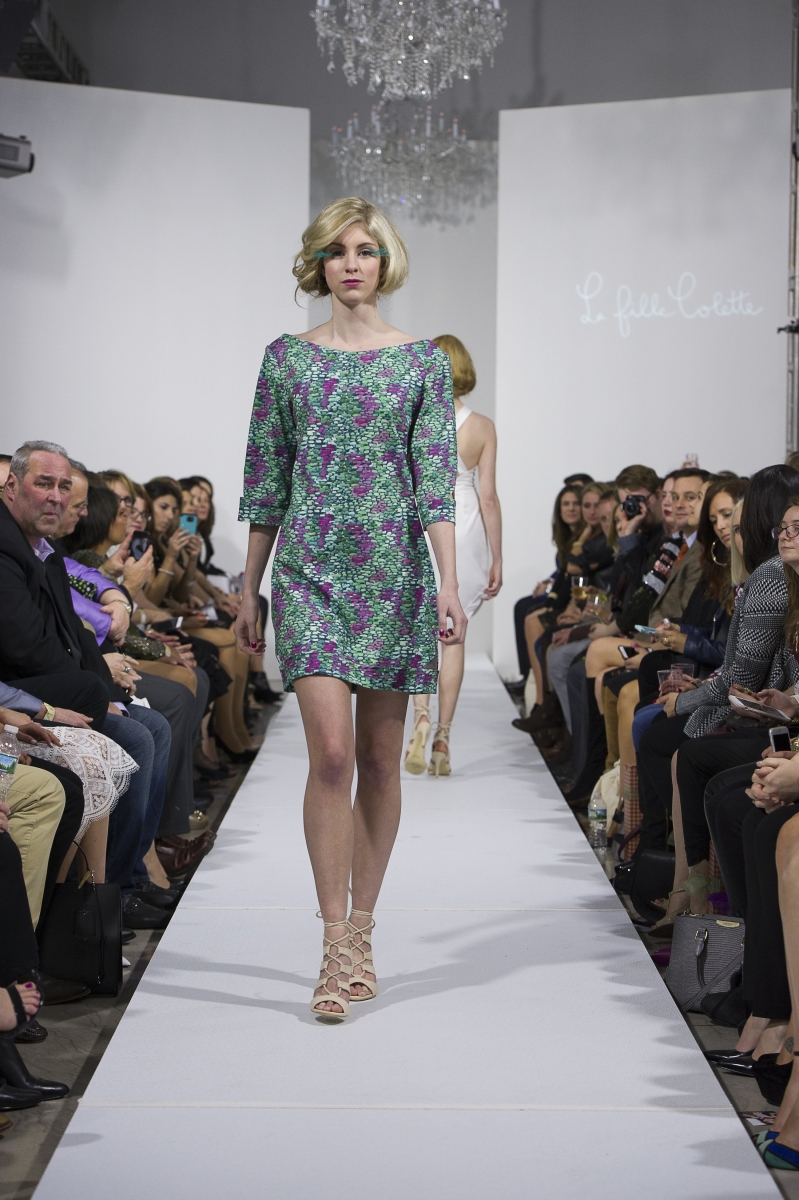 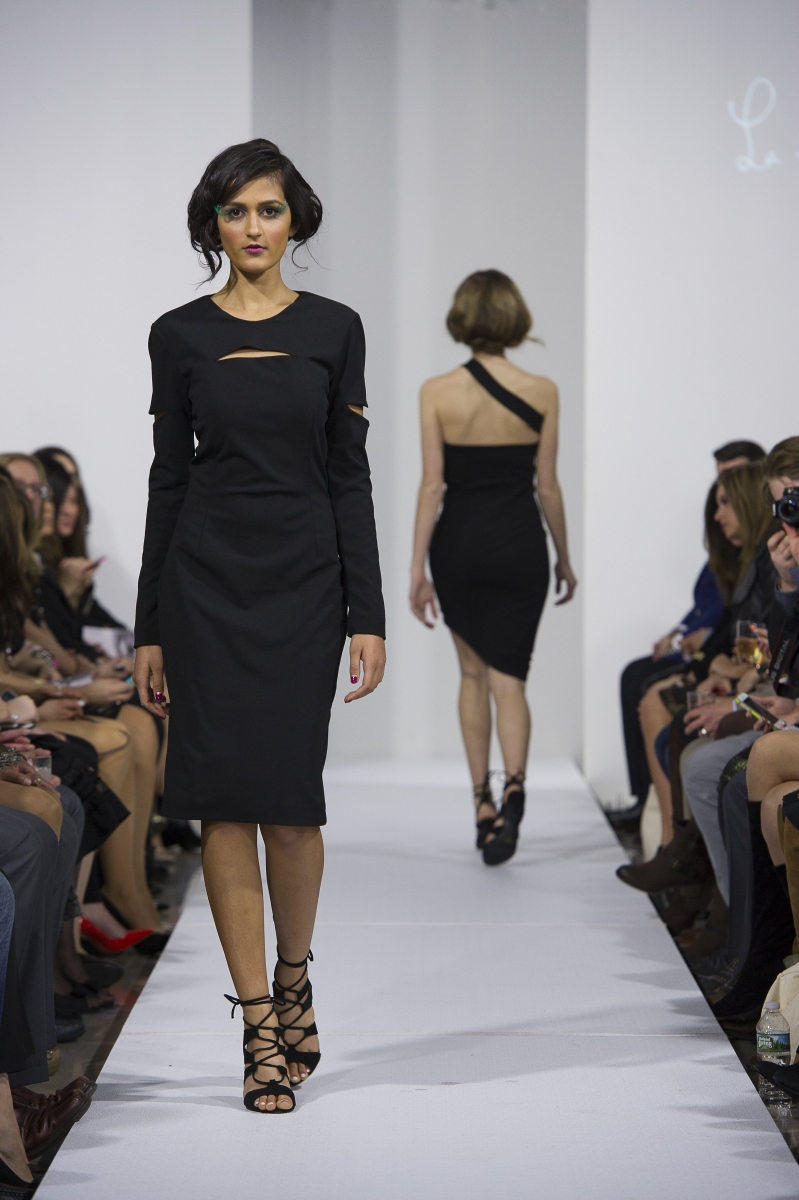 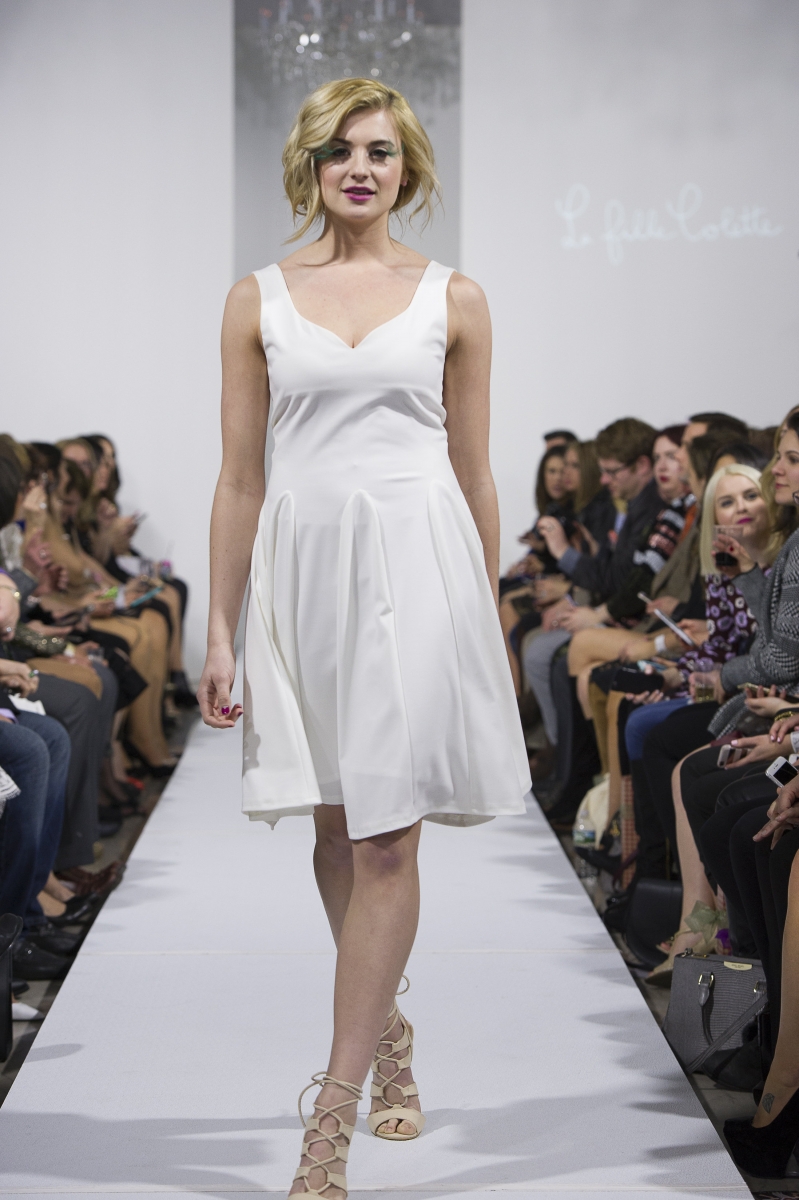 5. Angelica Timas had fun with patterns, lace and metallics in this collection, which included midriff-baring separates. The self-taught Boston-based designer launched Chikke in 2014. 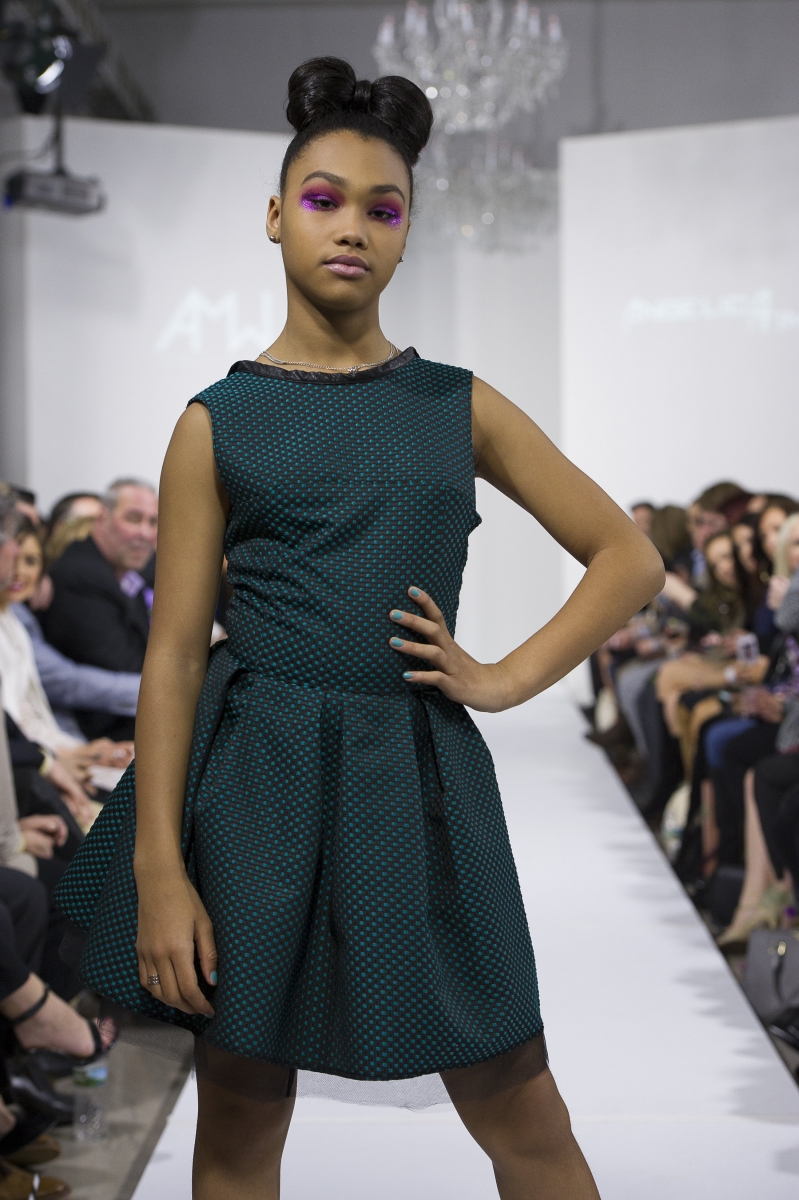 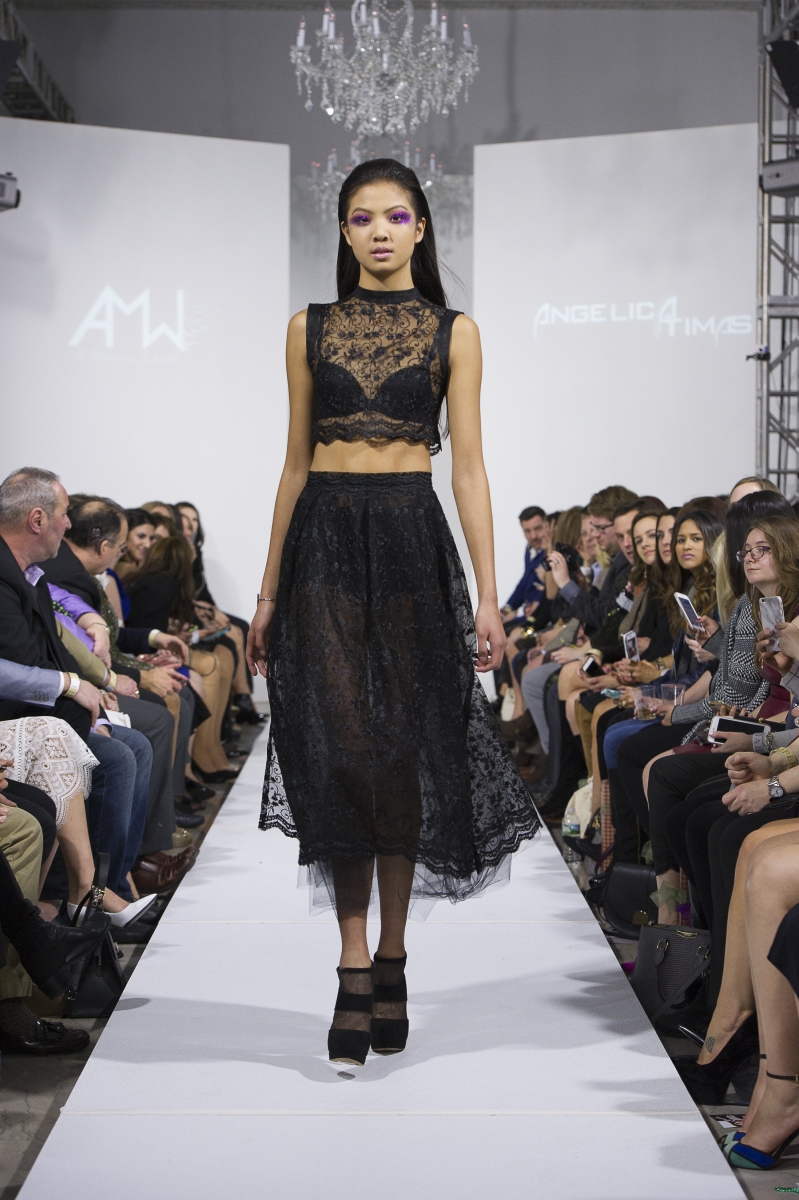 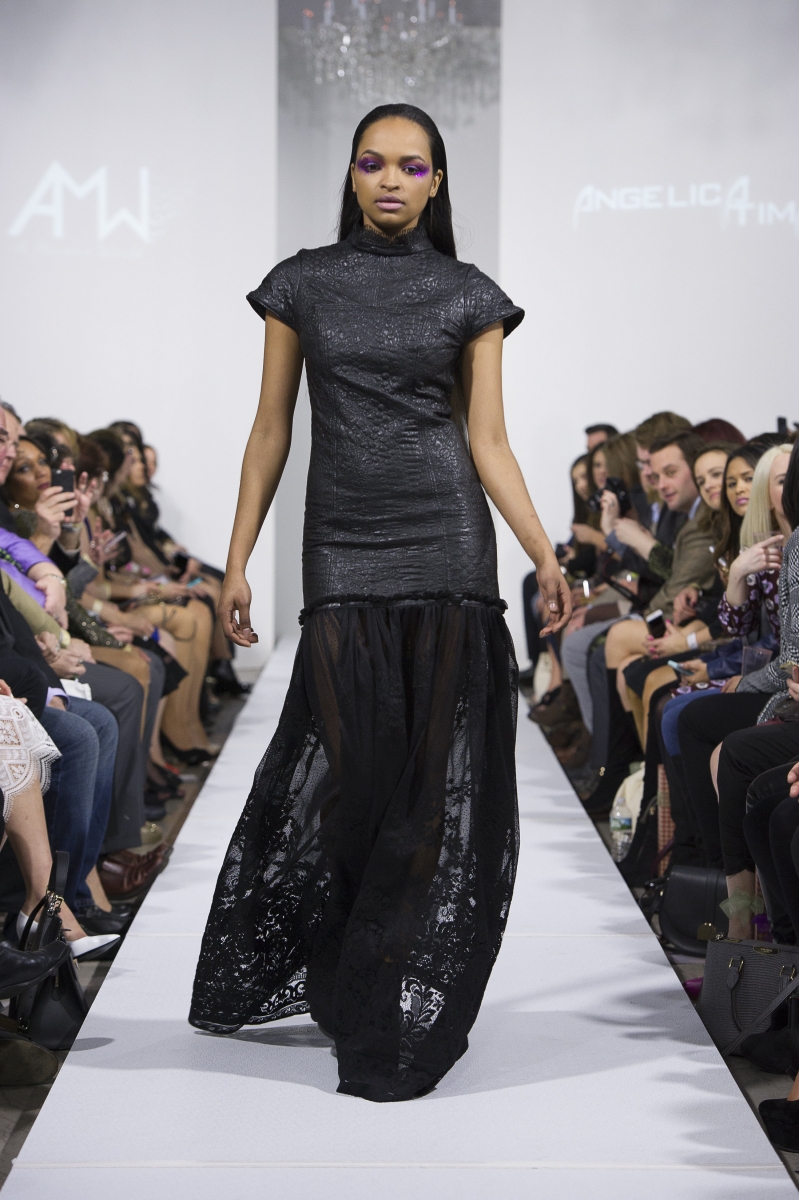 6. Alexandra Nam is a New York-based designer who attended Parsons Design School for a Fashion Design BFA. Her collection includes tailored full-length menswear jackets and pantsuits with sexy, feminine detailing and plunging necklines, but also flowy coats, like the light blue ruffled one recently worn by Lady Gaga. Several pieces in this collection make a statement, such as the abstract navy suit with white boning that frames the face and neckline, resembling a guillotine, and the structured tan leather shoulder holster paired with a light blue coat. It’s for the woman with an edge who is ready to take her career to the next level by wearing garments of another dimension. 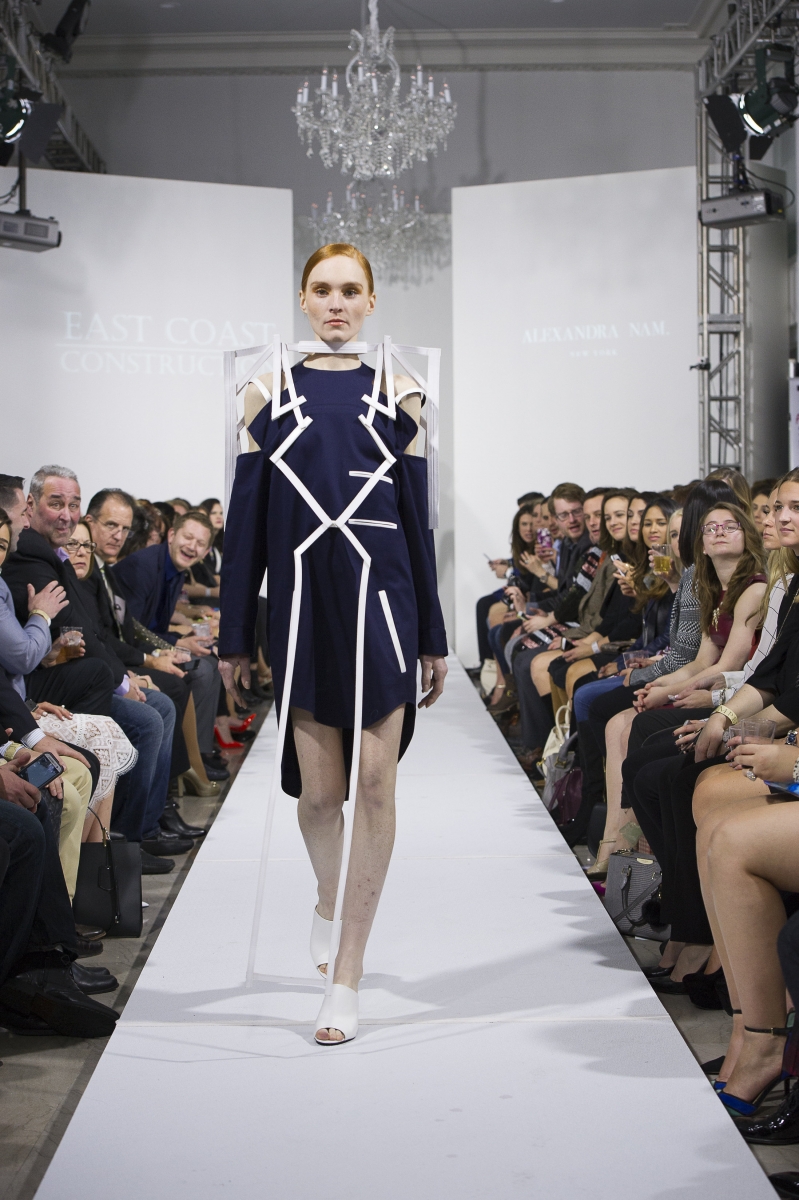 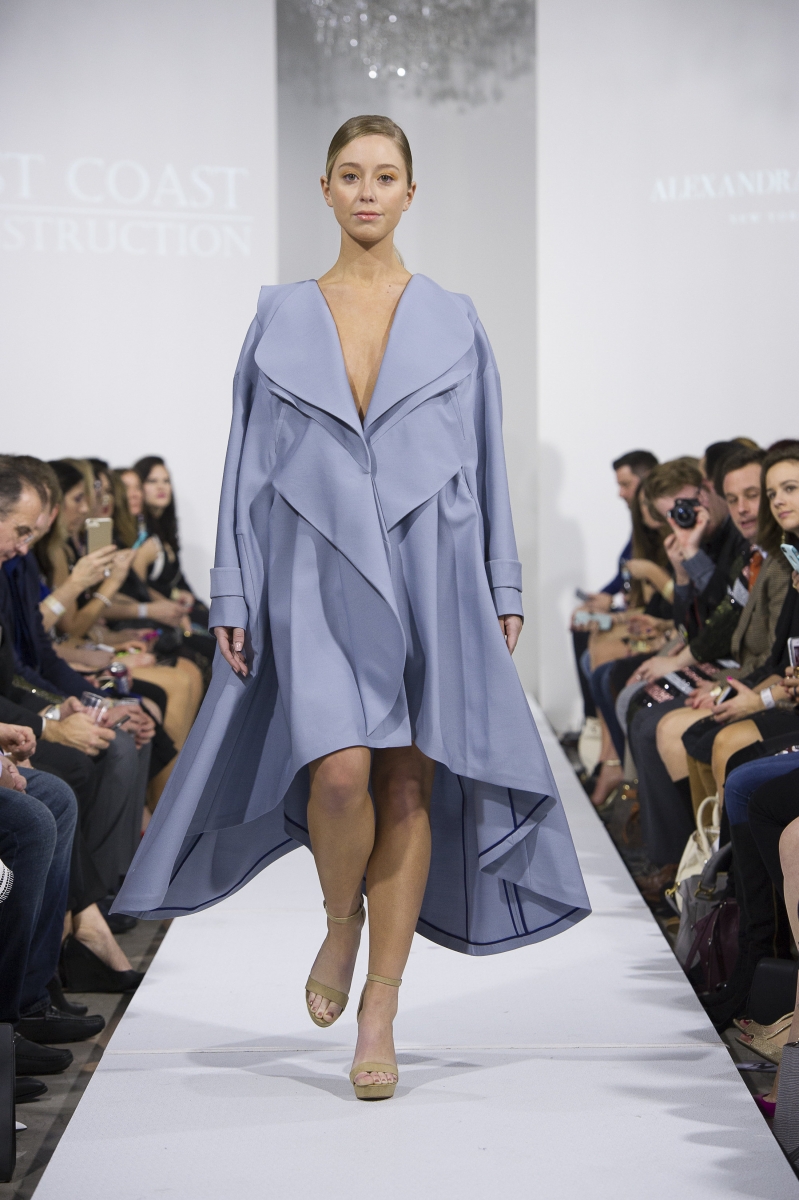 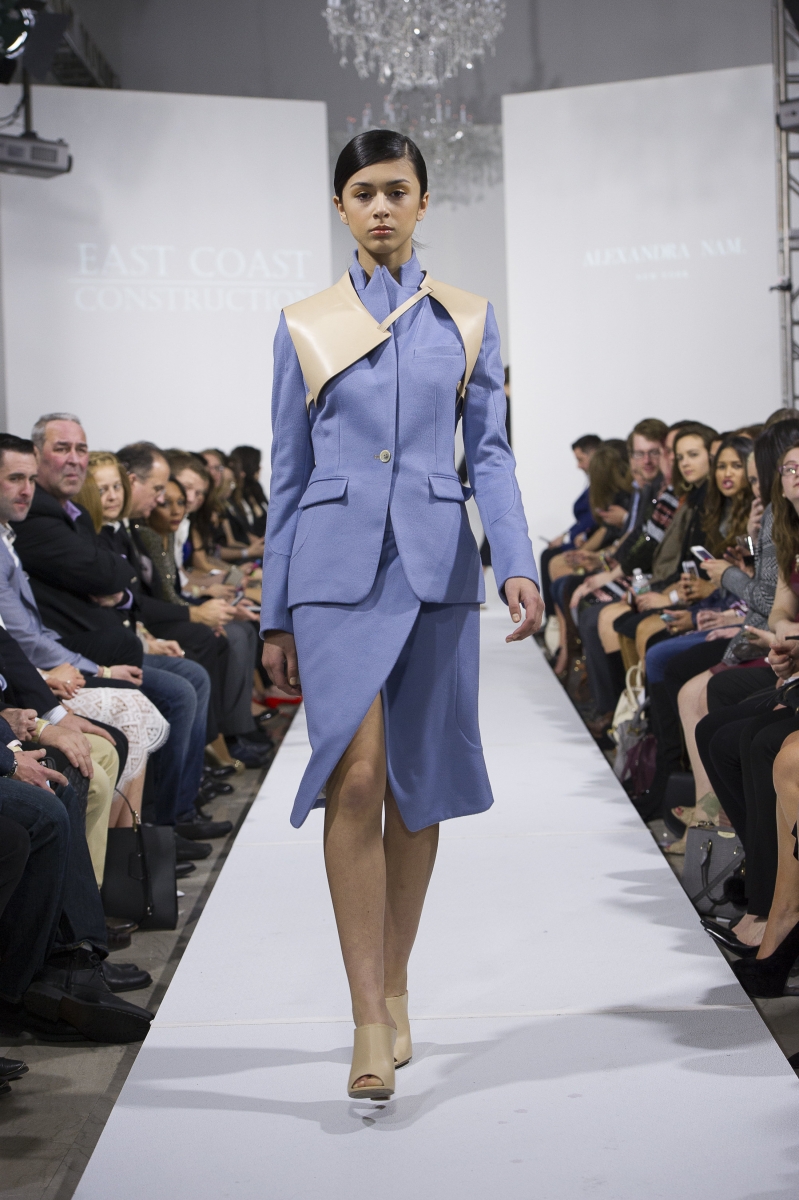 7. Pini by Nick Pini features thigh-skimming cocktail dresses in fabrics and textures that wow. We could see famous pop-stars like Gigi Hadid and Vanessa Hudgens in these dresses, and maybe even J Lo would dare to go there! The designs feature nude and black tones in sleek fabrics with ruching, and others with fur and intricate feather appliqué detailing. Although Pini is from Attleboro, Massachusetts, he is inspired by the California dream, and he launched his line in 2013. 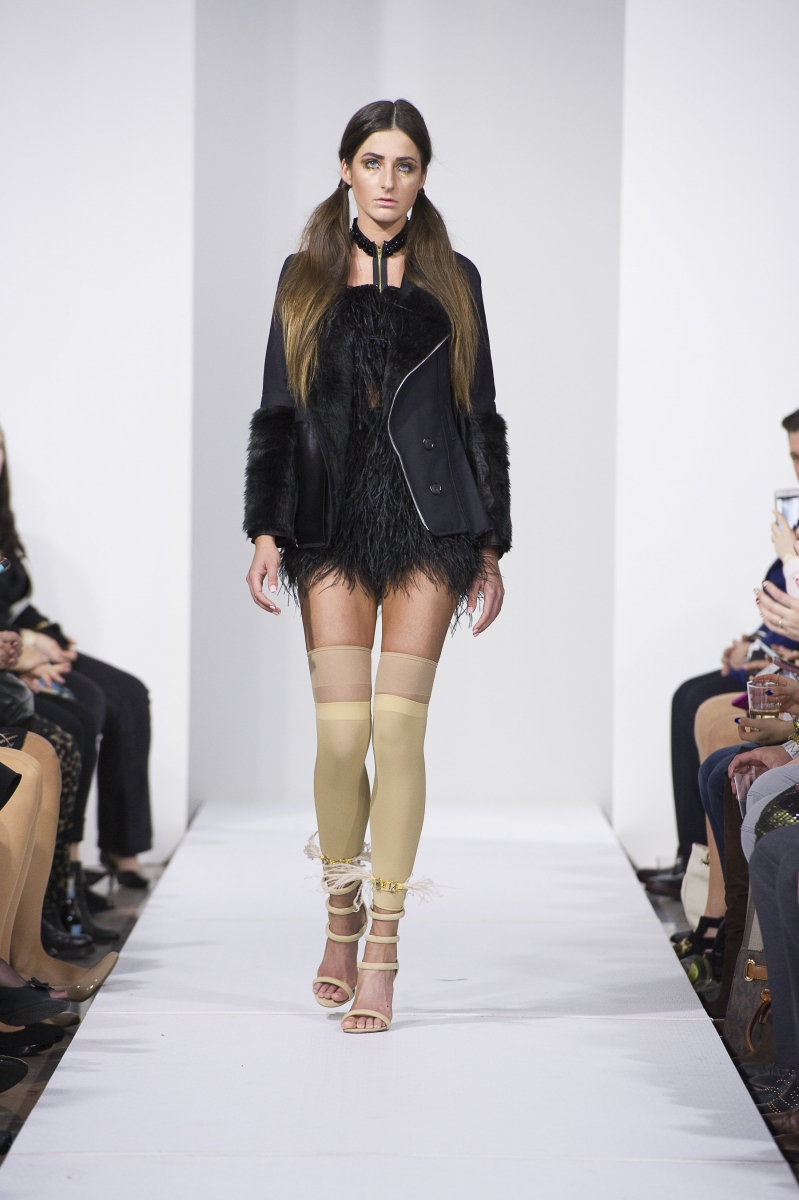 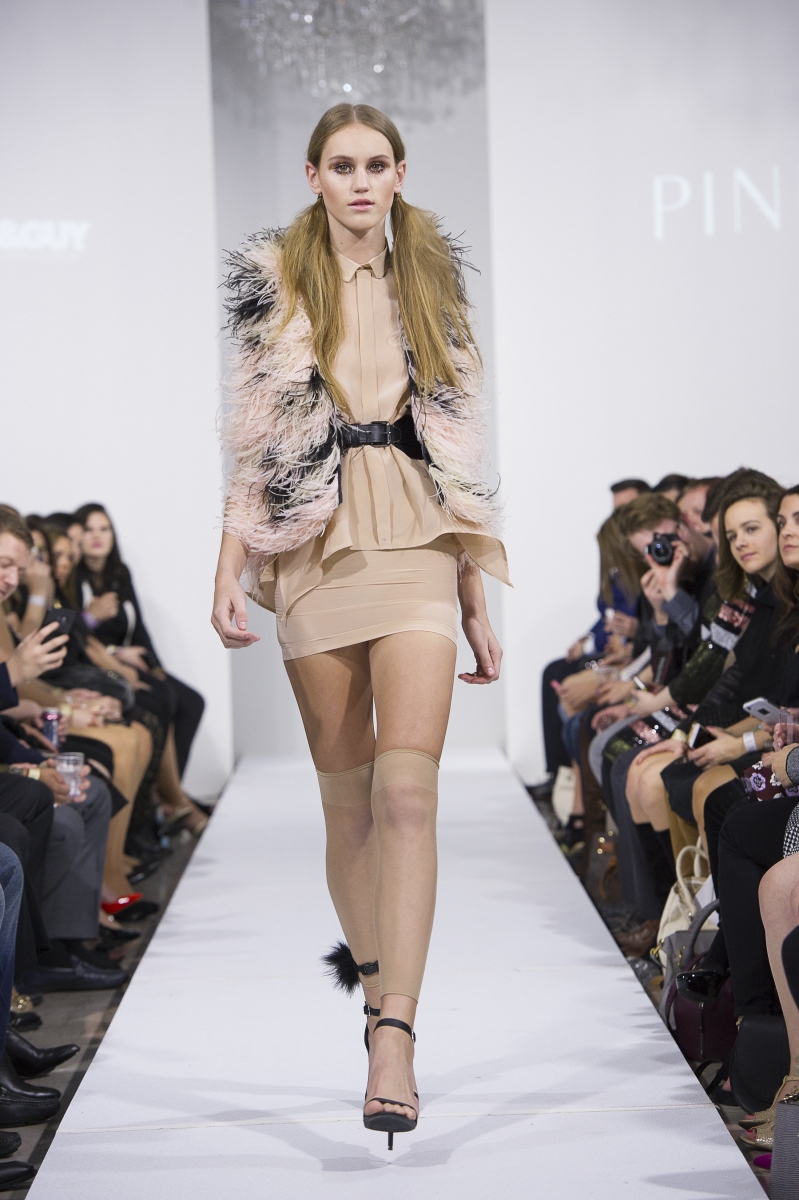 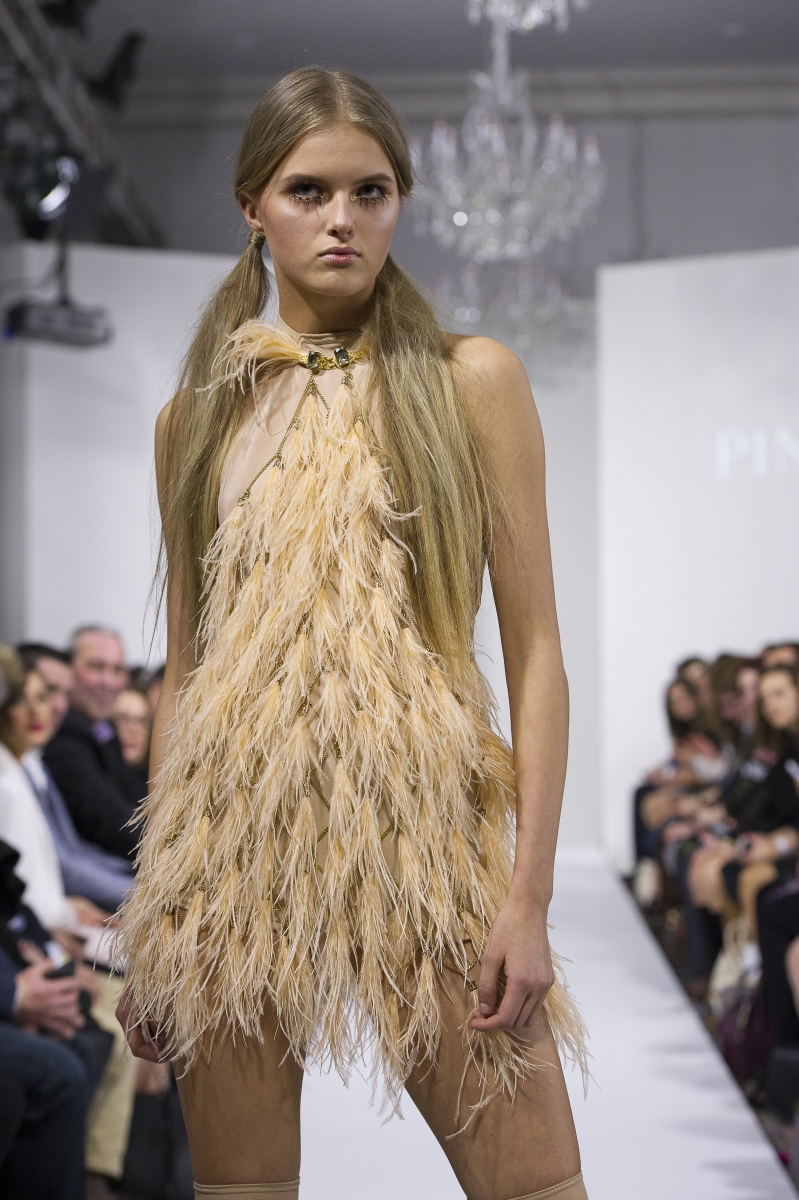 8. Amy Stetkiewicz’s talent as a designer shows in the structured fit of her trademark leather pants and form-fitting A-line skirts. Usually in metallic colors, in this show, the pants and skirts were paired with oversized sweaters in both subdued and bright colors. Highlights included a royal purple toned fur coat, a full-length black leather halter dress with fringe along the bottom and a metallic orange cocktail dress. She earned her education from the Parsons School of Design in New York City in the early 1990s. 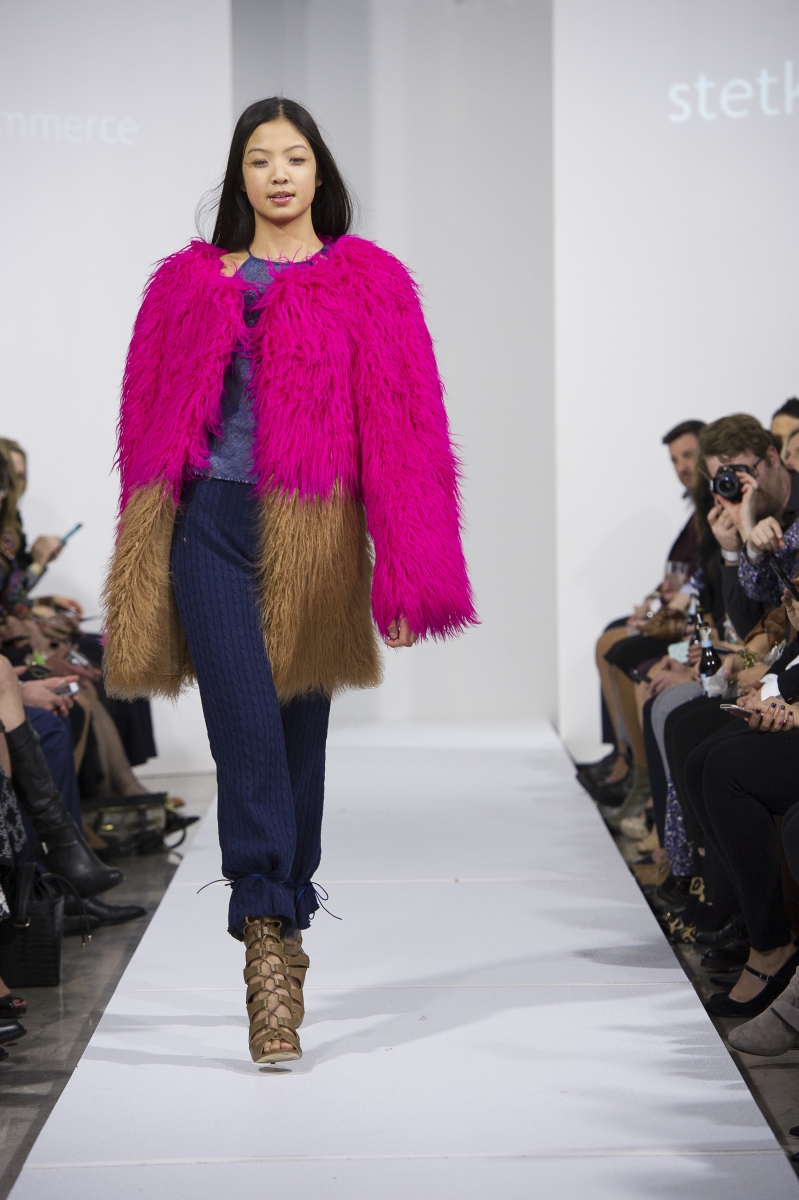 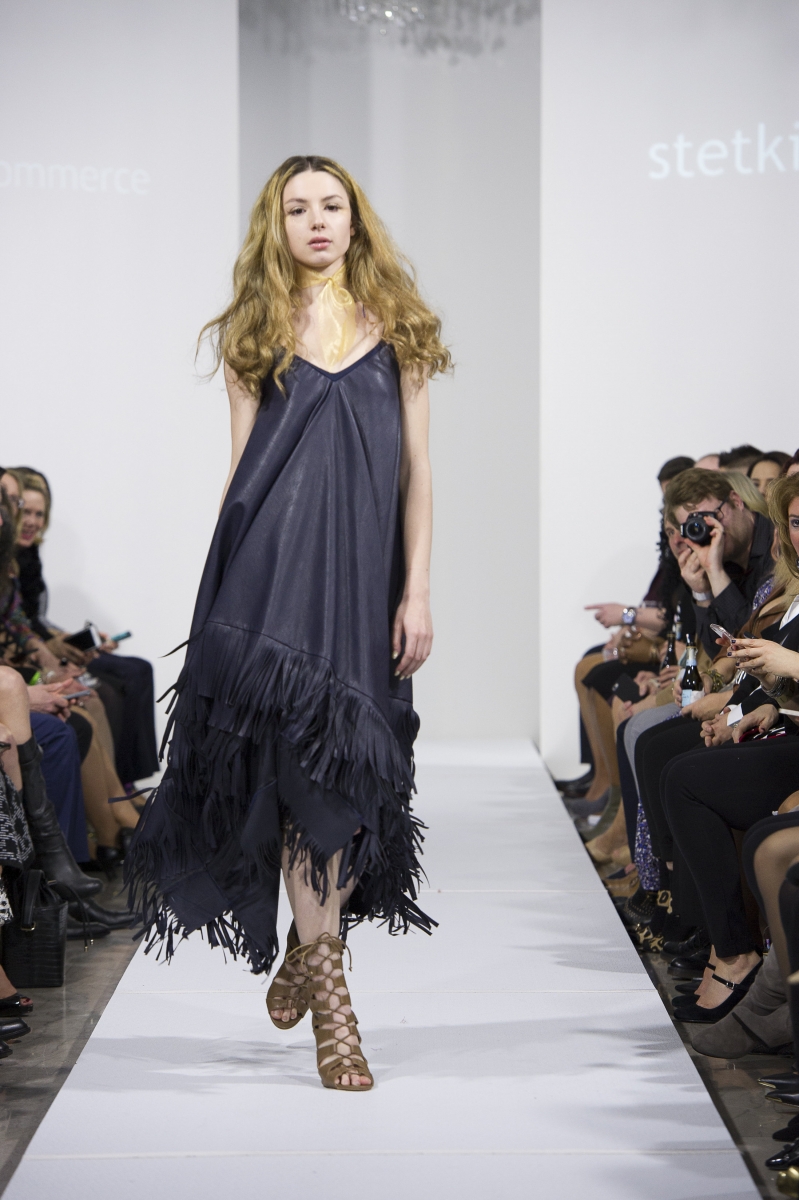 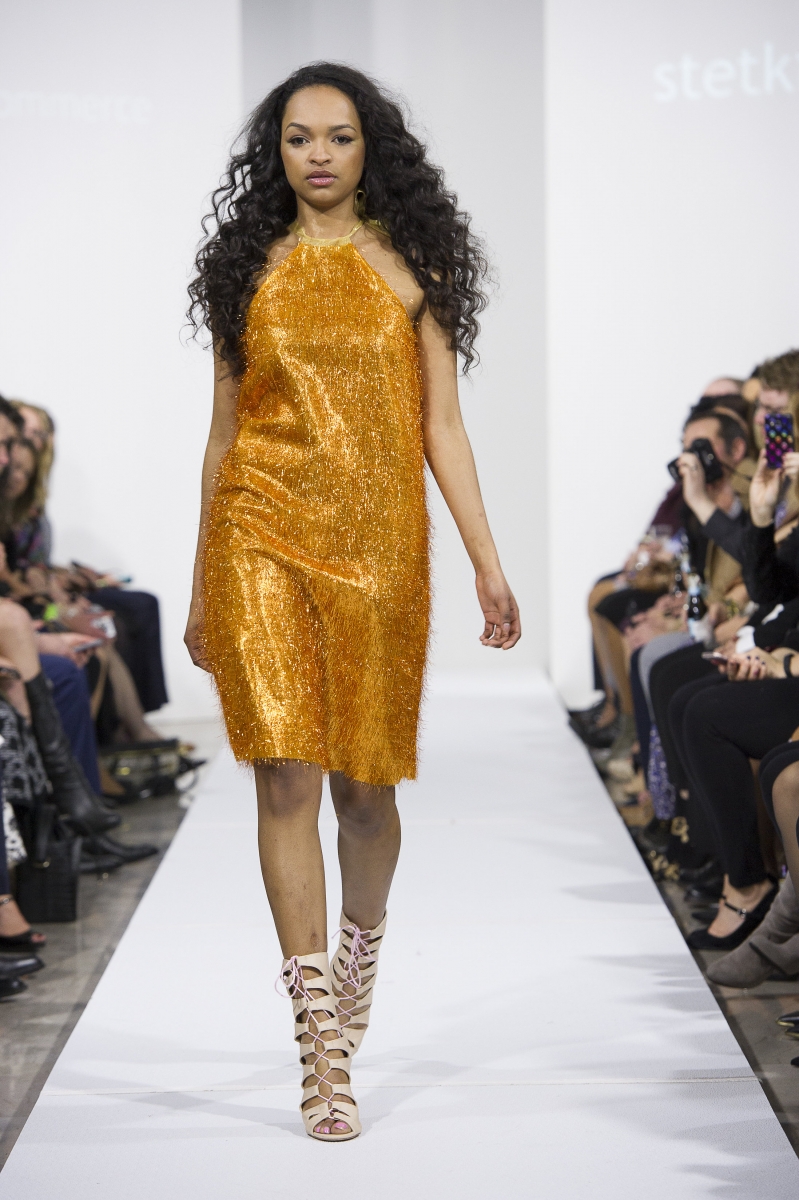 9. Jess Abernethy never ceases to amaze us with her varied, wearable collections. This time around, she relied on jewel tones, metallic fabrics, sequins and leather accents to create one unified collection. Favorites include a black and white dress with a lightning-like ombre pattern, a white jacket with turquoise leather sleeves and wide-legged trousers in a deep purple satin. Abernethy is a Providence-based designer who is a veteran of StyleWeek, participating since the very beginning. She received degrees in both Design and Pattern Making from the esteemed ESMOD University in Munich. 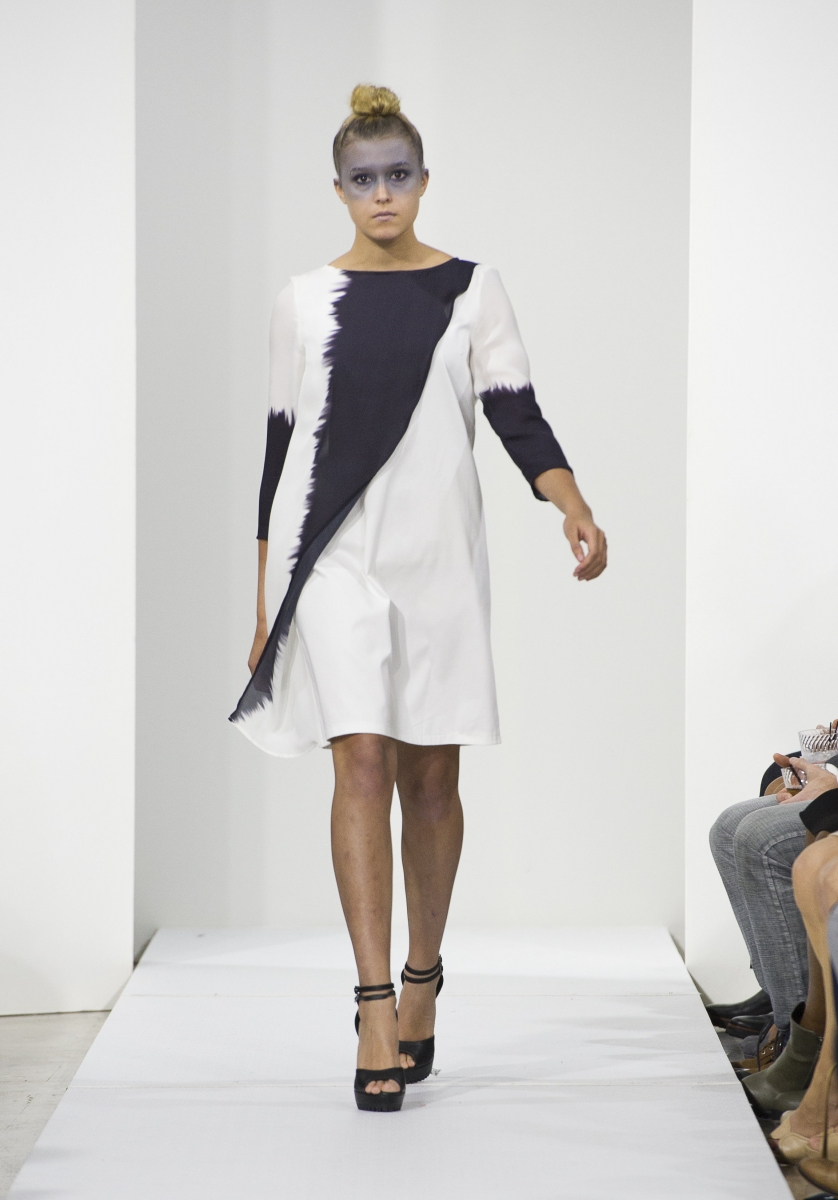 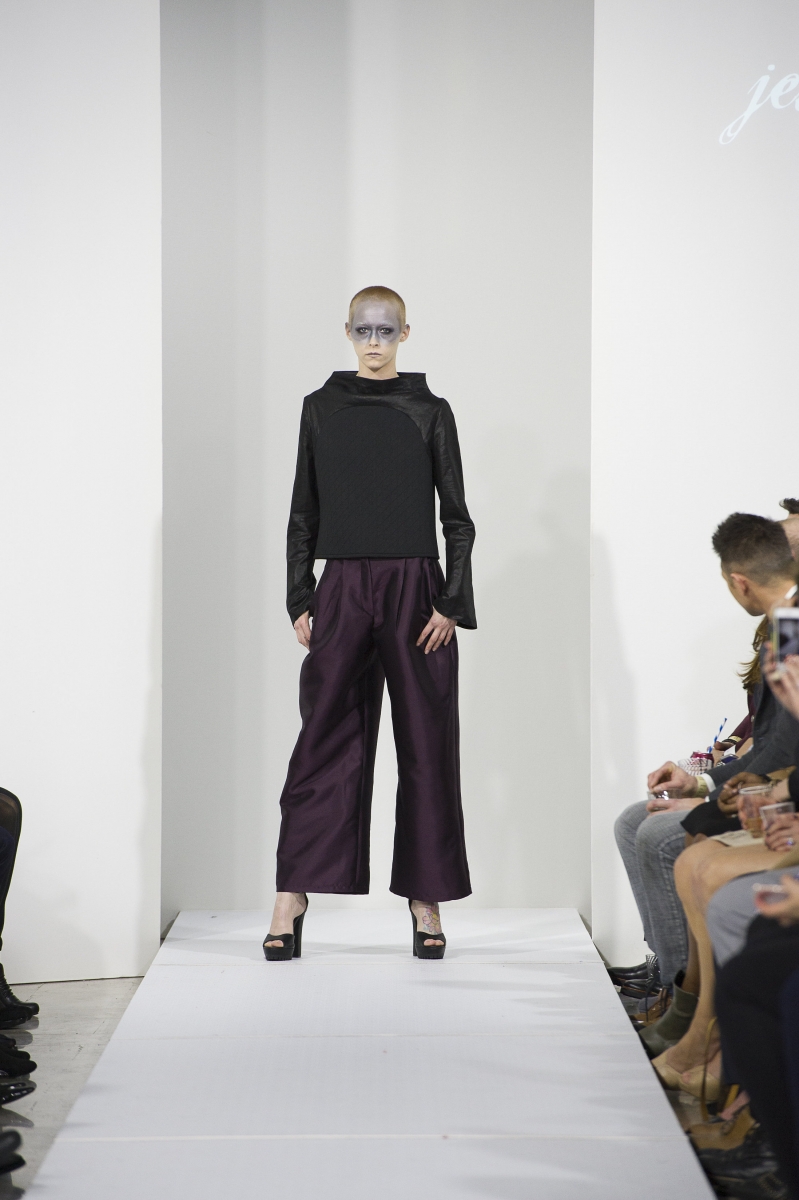 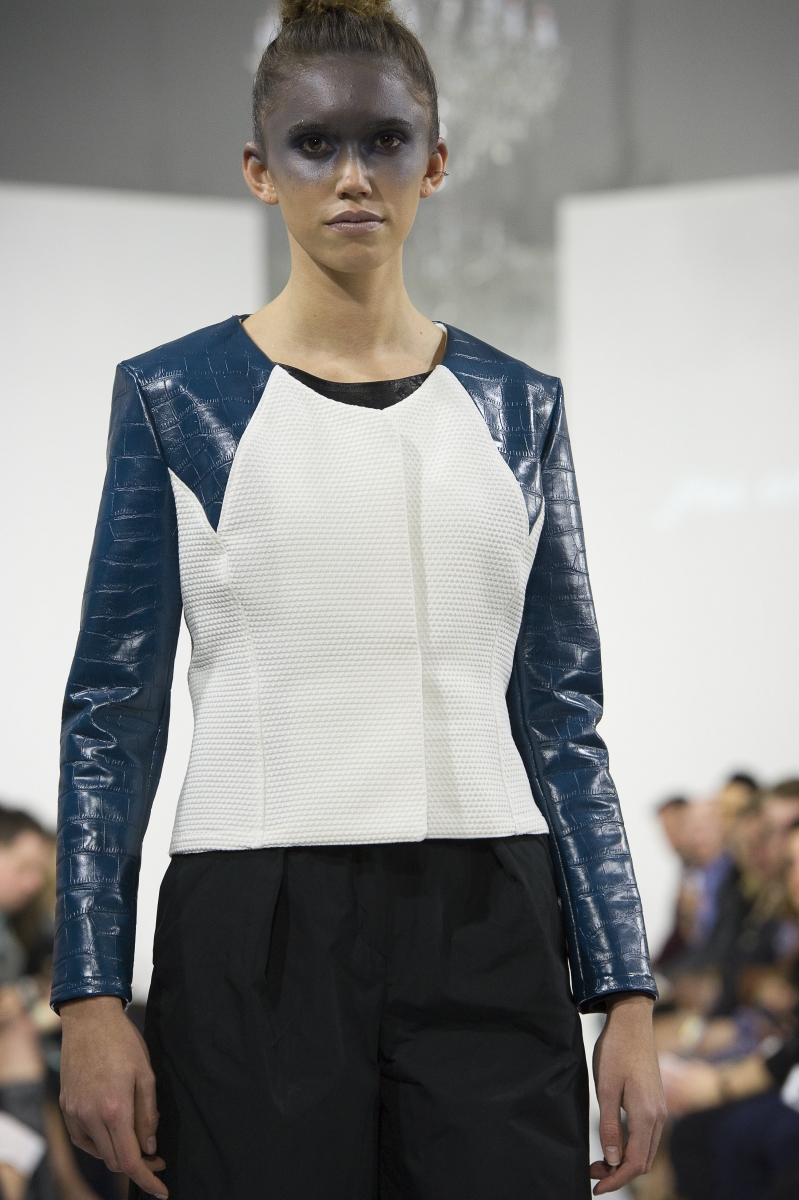 10. The renowned Jonathan Joseph Peters knows how to close a week’s worth of fashion. This time around, the Providence-based designer opened his show with a pair of lively drag queens, Payton St. James and Kira Stone, plus a hot pink feather boa and animal print-wearing rocker chick. After gearing the crowd up with a great lip-synced performance to "White Woman," the girls (reluctantly) retreated to let Jonathan’s collection take over the spotlight. The models, coined Deco Dollies, wore beautiful cocktail dresses, skirts and gowns in the most vivid reds, greens and purples in shiny fabrics. Luxe patterns took over the runway in elegant, unusual silhouettes including a beautiful pink beaded top paired with figure-flattering fuchsia A-line skirt. The jaw-dropper was a ruby red, off-the-shoulder gown reminiscent of Scarlett O’Hara in Gone with the Wind. We loved the night-after-a-Gatsby-affair hair, complete with tousled and messy updos and glitter everywhere. 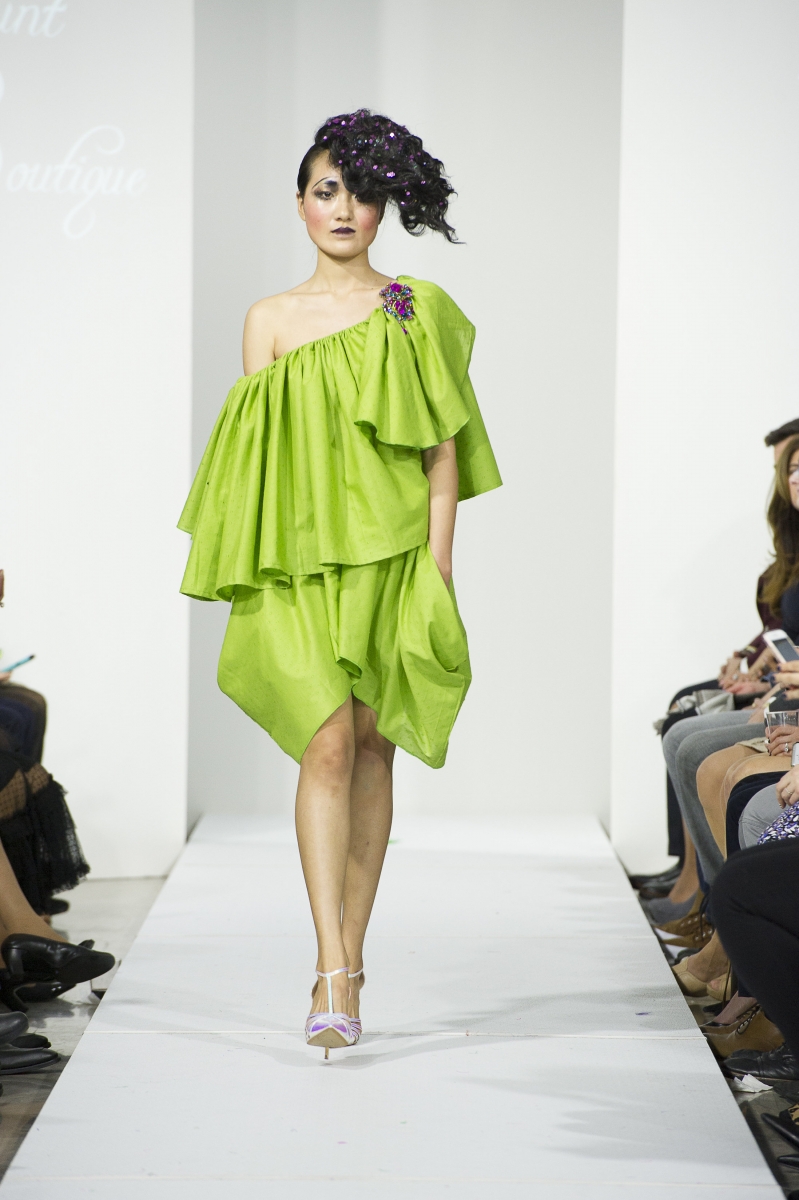 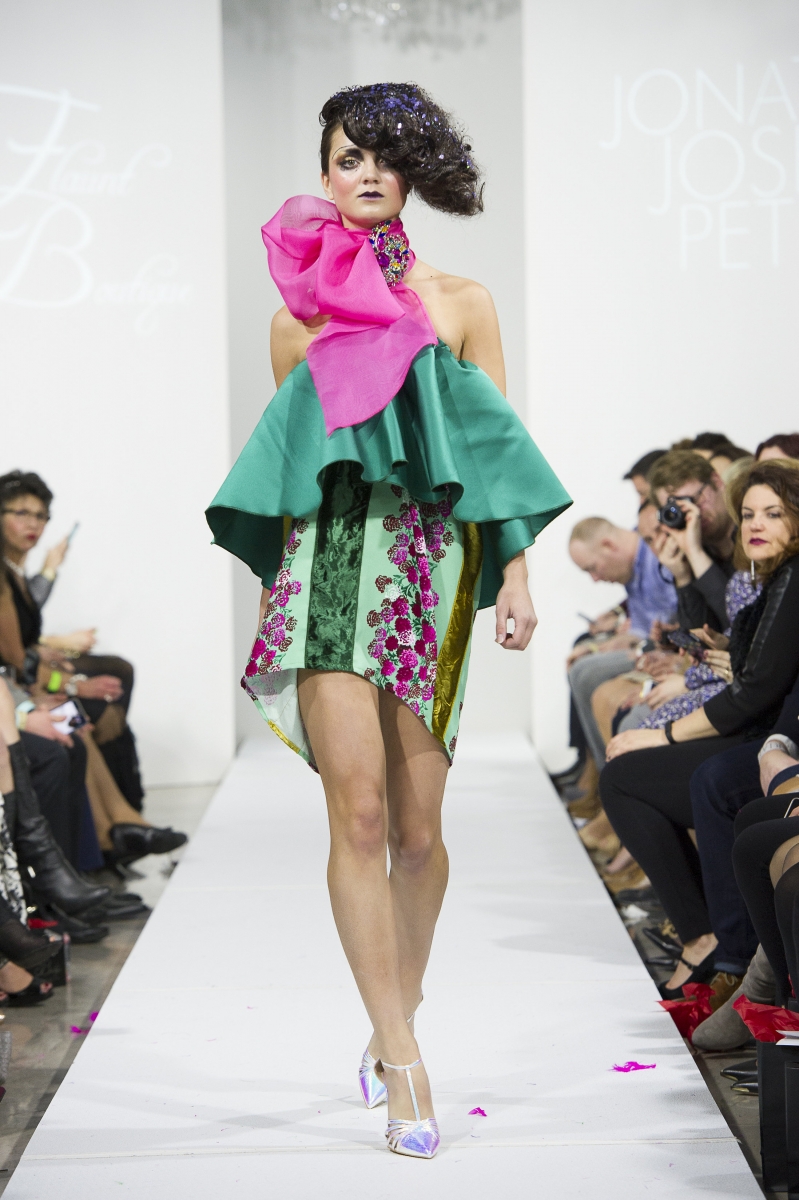 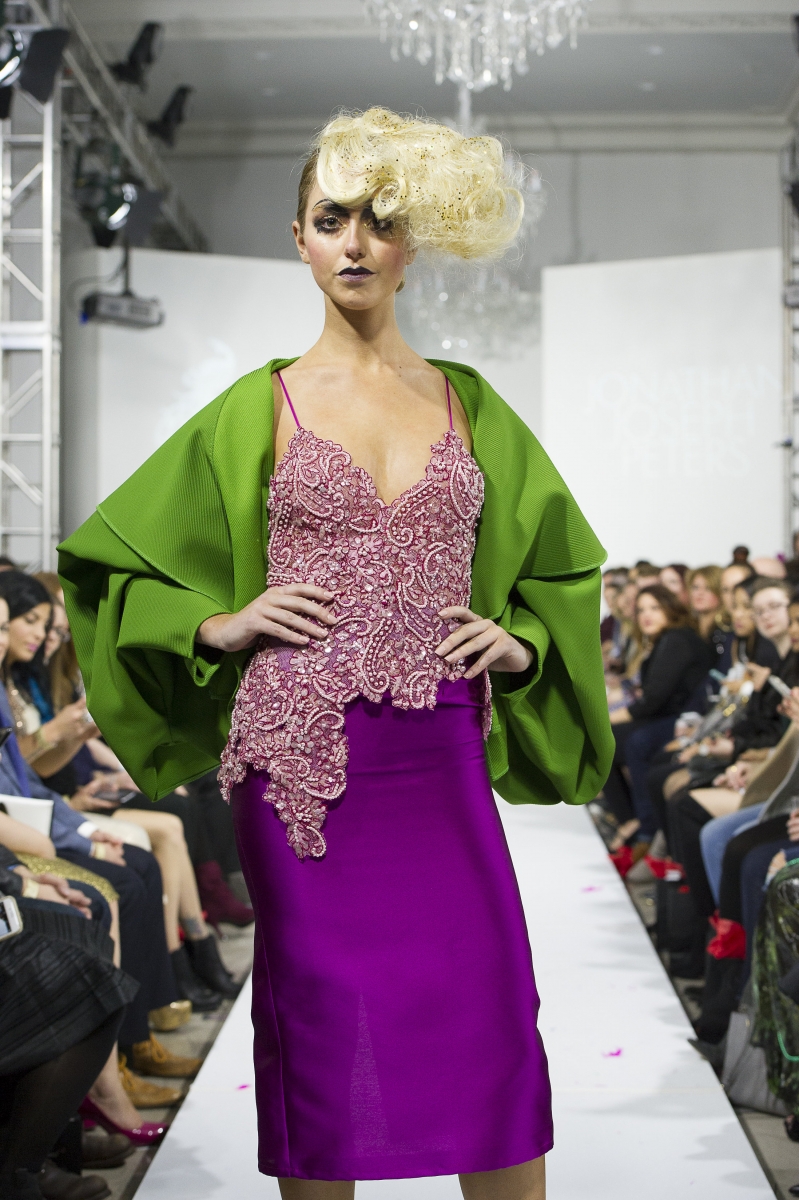 All photos by Myke Yeager Photography.