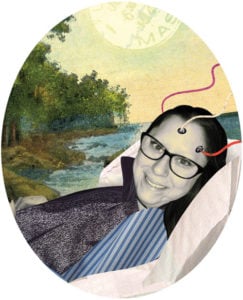 Jessica Bishop used to live in paralyzing fear of glass ketchup bottles. The shiny glass bottle often found at your friendly neighborhood diner was poison and would attack her — at least, that’s what her obsessive compulsive disorder and anxiety intuited. Bishop also suffered from bipolar disorder and severe depression, a slew of illnesses that resulted in self-harm and frequent hospital admission.

But today, Bishop, twenty-six, lives on her own in Woburn, Massachusetts, and is virtually depression-free. A little more than six months ago, this would not have been possible. Back then, she was often confined to a hospital bed.

“I ended up in a lot of inpatient units, back to back. I was super depressed, sleeping all the time, not being able to work consistently and I kept engaging in self-harm and had high anxiety,” she says, sitting in her apartment. “It got to the point where I talked to the doctors at one of the hospitals and they recommended ECT.”

ECT, short for electroconvulsive therapy, is a commonly used procedure for treatment resistant depression, with Rhode Island’s Butler Hospital performing around 2,000 treatments per year.
Dr. Linda Carpenter, a psychiatrist and specialist in ECT at Butler, says, “It’s something that all psychiatric hospitals and many general hospitals want to and have to offer for their patients because it’s lifesaving when nothing else works.”

But even though it is a standard-of-care treatment and a lifesaver, many still picture the unflattering portrait painted by popular culture, where it is portrayed like a form of torture where patients are pinned down against their will with a maniacal doctor electrocuting them.

This negative image in our collective imagination is far from the truth, but has its origins in ECT’s long, complex and stigmatized history.

“Observations about people having seizures and then coming out of their seizures and having better mental status are very old,” Carpenter explains.

Inducing seizures was seen as a way to bring relief from symptoms of mania, depression, psychosis and schizophrenia.

But, in the early 1900s, the methods of instigating them were primitive compared to today.

Seizures were often induced through insulin injections, causing hypoglycemia and with it, uncontrollable convulsions and coma states. It wasn’t until the late 1930s that electricity was considered.
Developed in Europe, this method of inducing seizures was mainly used to treat schizophrenia. Then, in 1941, its effectiveness in treating depression was first established.

“Modern ECT reflects the evolution of a medical procedure from primitive and barbaric things done nearly 100 years ago to a safe and highly standardized treatment in psychiatry,” Carpenter says.

But it still had a long way to go. As ECT was developed and its successes shown, its application still left much to be desired. Dr. Martin Furman, the chief of Butler’s ECT service, explains, “General anesthesia was only introduced for ECT in the 1960s and the regular use of a paralytic agent was introduced about a decade later.” Patients would often suffer broken teeth and fractured jaws due to the spasms that come with inducing a seizure.

Plus, ECT was sometimes misused as a way to control mentally ill patients rather than to cure them.

“Psychiatric medications were not available at the time when ECT was first developed, and patients with severe disorders were often confined in mental institutions with few humane treatment options,” Carpenter says.

In an NIH conference on ECT in 1985, it was stated that ECT’s “use as a means of managing unruly patients…contributed to the perception of ECT as an abusive instrument of behavioral control for patients in mental institutions for the chronically ill.”

As did one famous book.

“It might be said to do the work of the sleeping pill, the electric chair and the torture rack. It’s a clever little procedure, simple, quick, nearly painless it happens so fast, but no one ever wants another one. Ever.”

These are the words of one of the characters in Ken Kesey’s 1962 novel, One Flew Over the Cuckoo’s Nest. The book, as well as the subsequent 1975 film starring Jack Nicholson, proved to have a damning effect on ECT’s reputation. It was tarnished to the point that anti-ECT groups grew in strength and number and, coupled with the growth of pharmaceuticals to treat mental illness, its use declined. Furman says, “There were legal constraints on ECT as well, most notably a bill signed into law in the 1970s by the then-governor of California, Ronald Reagan, which restricted ECT in California.”

Ironically, it was during this time of great pushback that the administration of ECT was improving.

As anesthesia and paralytics agents became standard with ECT, in 1976 the FDA grandfathered ECT devices into regulation. The ECT machine was slotted in as a Class III device, making it “high risk”; it has remained in this class ever since.

While its reputation has recovered slightly due to FDA regulation, further research, proven efficacy and high profile cases of success like that of Kitty Dukakis, the fear of the treatment still exists. Side effects include memory loss and some anti-ECT advocates believe it deletes months (or even years) off of memory.

With a controversial past and advocacy groups’ anti-ECT rhetoric swirling through the ether, it is easy to see why people are hesitant to give it a go, even when it could save their lives.
Bishop admits that when a doctor first suggested she give it a try, she was hesitant.

“I was wary of it at first, I heard it isn’t good, but then I heard it is good, so I decided to figure out my own choices about it.”

She gave it a chance.

On August 17, 2016, her mom drove her to McLean Hospital in Belmont, Massachusetts, and she received her first treatment. “There’s a whole floor just for ECT. You go in, get settled in bed, they ask how you’ve been feeling, physically, emotionally, mentally,” she explains. “They get an IV ready and take your blood pressure, then they wheel you into the room where they actually do the ECT. I have to state my name and my birthday right before they put me to sleep.”

Then the anesthesia is administered and Bishop drifts off into nothingness. The doctor sticks electrodes to specific parts of her skull, and the electricity is administered. Her vitals and general well-being are closely monitored, and after waking up she finds a nurse or doctor by her side.

“They already have me out of the room with a little oxygen mask and one of the doctors or nurses sitting next to me,” she says. “Then, we go into the other room where we get to snack and wait to get picked up.”

She has had more than forty such treatments.

While she found that after treatments she would get headaches and her short term memory suffered, the effect on her depression was astounding.

“It’s really, really helped with the depression. I haven’t felt the depression since I’ve started it. Even my therapist noticed that I don’t have symptoms of depression anymore,” she says.

Her experience is a common one, with a nationwide success rate as high as 60 to 90 percent in some studies and with ECT considered a standard of care in certain psychiatric cases.

“I think it’s important to give it a try if it’s mentioned. To not be afraid of it,” she says. “I mean, I am more afraid of my depression than ECT.”