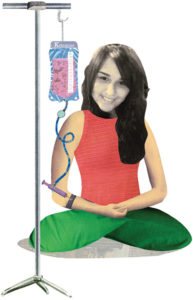 In October of 2012, nineteen-year-old Jessica Swift laid in a bed in a doctor’s office and rubbed her feet together. She had just received her first intravenous ketamine infusion, and as the pads of her toes touched the sides of her feet, she felt a rush of emotion; the last time she was able to do this was more than two years earlier, before the stabbing, icy hot pain in her legs got so bad that it made any touch, even the caress of a soft breeze, unbearable.

Swift has lived with this neuropathic pain, known as Complex Regional Pain Syndrome (CRPS), since 2008, though she wasn’t formally diagnosed until 2009. CRPS is ranked on the McGill Pain Scale as a pain worse than childbirth, worse than limb amputation. And ketamine is her only relief.

Ketamine is a drug that was first synthesized in the early ’60s as an anesthetic, for which it is still used today. But throughout the years, it has acquired somewhat of a Doctor Jekyll, Mr. Hyde identity.
Its Mr. Hyde reputation comes with its street use as a party drug. Special K. Cat Valium. Super Acid. You can almost hear an oompa loompa saying “Let’s take a dive down the K-Hole!” as he offers you a pixie stick filled with the pale yellow powder.

Ketamine’s street use, as described by a 2016 article in Frontiers in Human Neuroscience, can cause dissociative, out-of-body trips where people claim to see God and the beginning of the universe. One website warns (right before telling users to take it in a “safe environment”) to “be extremely careful how much ketamine you take; it’s stronger than the same amount of speed or coke and the more you wolf down, the stronger the effects.” According to the British Journal of Clinical Pharmacology it can cause severe schizophrenia-like symptoms and hallucinations that are completely separate from reality.

When Swift tells people that she gets monthly ketamine infusions, they are often quick to raise an eyebrow and immediately think of its street drug reputation.

But ketamine is mainly used for legitimate medical purposes, particularly as an anesthesia for high-risk patients and for animals. This use of ketamine is considered safe and is administered within closely monitored settings, prompting the FDA to classify it as a Schedule III non-narcotic, meaning it has “a potential for abuse less than substances in Schedules I or II and abuse may lead to moderate or low physical dependence or high psychological dependence.” It’s grouped with the stimulants benzaphetamine, phendimetrazine and anabolic steroids.

Swift receives her low-dose, sub-anesthetic ketamine infusion at the Interventional Pain Management Center of Rhode Island in Pawtucket from a certified anesthesiologist, a situation more akin to its use in hospitals than on the streets.

The use of ketamine to treat chronic pain is known as “off-label,” that is, for a use not approved by the FDA. Insurance does not cover it and treatments can cost upwards of thousands of dollars. But since it is administered by an anesthesiologist, a profession trained to use it, there are no legal issues.

Pradeep Chopra is one of the doctors at the Center. He has black hair, wire-rim glasses and knowing eyes. A Harvard-educated anesthesiologist by training, he is also a pain specialist and has the only practice in Rhode Island where off-label ketamine infusions are given. Most of the ten or so patients who come to him for ketamine are, like Swift, diagnosed with CRPS.

While using ketamine to treat CRPS is an off-label use of the drug, there is evidence as to why it helps.

“Because ketamine is a generic drug, there are not many pharmaceutical companies interested in funding the research. However, there are plenty of peer-reviewed papers on its use in CRPS and depression. We have very solid science on why it works for CRPS,” Chopra says.

What causes concern amongst some in the medical field is the lack of studies showing possible side effects of long term use, even within clinical settings. According to a 2014 paper published in the British Journal of Clinical Pharmacology, “ketamine administration should be restricted to patients with therapy-resistant severe neuropathic pain,” a last resort.

“When a patient comes in with CRPS, we try everything else that is out there first. If all that doesn’t work, then we give ketamine a try,” Chopra says.

He first gives his patients ketamine under the tongue to see how they react, and if the results are positive, he will suggest they have a ketamine infusion.

“Like all drugs, it doesn’t work on everyone. It works on most but not all. And because of its safety profile, it’s relatively safe to give to these patients under certain monitored conditions. The idea is that it gets them back to functioning, to a functional life.”

As it has for Swift.

The nurses bring Swift into a room, carefully put the IV in and she pulls out her music and coloring books. Four to five hours later, she is flushed with saline, packs up and her parents drive her back to Connecticut. While the effects are nothing like when ketamine is used on the streets, she will sometimes have minor side effects like seeing “psychedelic colors and shapes” when she closes her eyes. But these side effects are nothing compared to the pain that drove her to seek this treatment.

Swift’s journey to using ketamine began with a freak accident when she was nine years old. She was carrying a vacuum down carpeted stairs when she slipped, dropping the vacuum and causing a framed picture to crash.

“A large piece of glass shot up and almost sliced my ankle clean off,” she says. “I severed two tendons, sliced a muscle, sliced everything down to the bone. It wasn’t bleeding at all it was so deep. I wound up needing 350 stitches.”

While she was able to walk again after months of rehab, her now bum ankle would roll at the slightest provocation. Still, life went on as it had before, but the calm was not to last.

One day, when she was twelve, her family and friends gathered to support her sister at a state championship softball game. Swift and her friends ran around in flip flops, tossing a rubber duck between them. The grass was wet from the previous day’s rain, and their flip flops squelched as they played. Then it happened — bam. Swift slipped and her right leg collapsed beneath her, shattering it below the knee. She lay on the wet grass, her foot facing the wrong direction, pain coursing through her.

Once again she was in the hospital and, once again, after successful surgery and rehabilitation, she was able to walk a year later. But her ankle continued to roll.

“I twisted my ankle a million times,” she says. “It got to the point where I eventually developed a locking and popping in my ankle joint. When it locked up it would hurt so bad. Little did I know that there was worse pain in the world!”

Swift went to a surgeon to stabilize her ankle.

“She said, ‘We are gonna tighten all this up, anchor it to your ankle, this, this and this.’ And she sounded so well educated that I was like yeah, let’s do it!” But during the surgeries, the doctor nicked some nerves in her ankle and Swift’s life with CRPS began.

She had some success with a spinal cord stimulator, but during a summer job at a local amusement park, she was attacked by a drunk guest, ferociously beaten and choked, and her stimulator battery damaged. After a slew of botched surgeries trying to replace it, one of which left her with a full body staph infection, she was left unable to walk, bathe or clothe herself, and in a state of near constant pain.

She spent two years in and out of the hospital for stretches of forty days at a time and with her body pumped up on narcotic opioids to dull the pain. This lifestyle, underscored by frequent pain and an inability to live a functional life, left her contemplating suicide.

“I was at the point where I contemplated suicide constantly, especially in the hospitals. I was heavily sedated for months at a time,” she says. “I lost time; there are weeks when I don’t remember anything, people came to visit me and I have no recollection of it.”

In October of 2012, a twist of fate and a last ditch grasp at hope led her to the Interventional Pain Management Center of Rhode Island and her first four-hour IV ketamine infusion.
On that cool fall day in Pawtucket, everything changed.

When the infusion dribbled its last drops, she rubbed her feet together. Her mother came in and started crying.

Five years and fifty-six infusions later, she is still convinced ketamine is the only thing that helps her live a functional, normal life. For her, the benefits far outweigh any known or unknown risks, side effects or the raised eyebrows she gets when people hear that her medicine is ketamine.