It was her last resort. After twelve years of her son in and out of hospitals, having more than 500 seizures a day and with seventeen-plus prescriptions that left him lethargic and with fuzzy memory, Crystal Repose had enough. She pulled the marijuana tincture out and gave some to her son. Later that day, he had a deep belly laugh for the first time in his life. Repose’s story is a common one: someone driven to finding a cure she would never have considered, for a chance at living a functional life. The search for normality leads people down roads they never thought they would set foot on, towards treatments that they might never have even heard of. Many of these treatments are riddled with stigma, plastered with misinformation or simply raise more questions than answers. But for many, they are a last ditch chance for relief, for hope. Medical marijuana is the taboo treatment that gets the most press, including here in Rhode Island where it is legal. But other once-taboo (or perhaps still struggling against a taboo mentality) treatments for chronic ailments are also being used in the Ocean State. Ketamine, an anesthetic mostly used for high-risk patients and animals, gets its stigma from its street use as “Special K,” a dissociative party drug that causes out-of-body experiences. But, in its clinical form, it is used in Rhode Island as an alternative treatment for severe, chronic pain and depression. Then, there is electroconvulsive therapy (ECT), an FDA-approved and commonly used procedure for treating severe depression that has had a bad rap from early years of misuse and the infamous portrayal of it in One Flew Over the Cuckoo’s Nest. But for many today, it is a last resort, a lifesaver. These three treatments, while wildly different, all provoke divided perceptions and opinions surrounding their use. 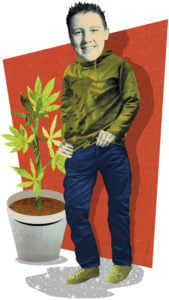 A few months after Kaleb was born, he had his first seizure. It was barely noticeable — his eyelids fluttered — but in reality, there was much more going on. As he grew, he would have between 500 and 1,000 small seizures per day and at least one grand mal per week. After years of using pharmaceutical medicine to try to control them, which his parents believe made his condition worse, today Kaleb’s medicine is marijuana.

Marijuana is, at time of writing, a Schedule I drug, a federal classification that means it has no currently accepted medical use and a high potential for abuse. It is grouped with heroin, LSD, ecstasy, methaqualone and peyote. It is often perceived as a drug of young counter-culturists who spend their days floating from job to job and smoking a bowl to relax.

But cannabis is much more than just a leafy plant with hallucinogenic properties. It is an enigma, a challenge to conventional drug regulation practices that place it into a murky sphere of legality.
It is federally illegal, yet individual states have the power to legalize it for medicinal use, as Rhode Island has. Although it is legal in certain states, because of its federal status it is difficult for medical researchers to obtain for large-scale clinical trials. Plus, as Dr. Linda Carpenter of Butler Hospital has observed as a member of the medical community, no pharmaceutical company is willing to fund a billion-dollar medical marijuana study.

“I think there are quality studies of cannabis that can be done, but in order to do a study like that, there has to be a very rich pharma sponsor; these studies cost lots of money,” she says. “When something has existed in the recreational realm like marijuana has, it’s tricky for a pharma company to just say, okay, we own this new medicinal marijuana product and we will spend billions of dollars to do a trial, because if they do make and distribute it, it’s not like somebody will buy their drug. Everyone will just go out and get their marijuana.”

With a federal status of “illegal” and no one funding large-scale research, there have been no quality, double-blind studies on cannabis and thus, there is little concrete knowledge about its efficacy, treatment abilities and potential side effects.

But even with a variety of unknowns, as of 2015 Rhode Island had estimated 11,620 registered medical marijuana users — and Kaleb is one of them.

Kaleb is now fifteen. He lives with his family in western Coventry, across the street from an old Colonial church and away from the hustle and bustle of urban Rhode Island. Outside their house, the smell of marijuana wafts lightly in the air. Inside, a family of five bustles about. Two kittens slither between legs and poke their heads into shoes while two terriers skitter along the dark wood floors. Kaleb emerges from his room, his eyes tired. His mother, Crystal Repose, keeps busy. Her face is framed by big, purple glasses and as she pours some coffee and talks, a hint of a Texas accent drawls through.
“Kaleb was six months old when I noticed he was having seizures,” she says, stirring her coffee. “ I didn’t know they were seizures, I just noticed the eye-fluttering.”

He would also hurl out bloodcurdling screams when he was taken from the car to the house, the blinding sunlight triggering seizures.

Kaleb suffers from epilepsy, a condition characterized by a sudden surge of electric activity in the brain that causes seizures. His episodes range from petit mal (brief loss of consciousness, eyelid fluttering) to full-blown grand mal (loss of consciousness and violent muscle spasms) and are triggered by many things: images on the TV, sunlight flickering through the trees, the feeling of corduroy pants against his legs.

“This morning, he thought he could go and turn on the TV because he was feeling good,” Repose says. “We woke up to his brother saying, ‘Kaleb, Kaleb, Kaleb!’ because he was seizing from the television. We were like honey, for the five millionth time, you can’t.”

Kaleb doesn’t remember what happens during his seizures and he still doesn’t fully understand them. But his family knows them intimately.

Before moving to Rhode Island, Kaleb lived with his mother in Oklahoma until he was thirteen, dealing with his epilepsy through traditional means. Frequent hospital visits and piles of prescriptions left him lethargic, save for rage fits that were side effects of the medicine.

After seventeen different types of medicine with side effects that Kaleb often experienced, he was put on a new one, Onfi. And then everything got worse.

It was a normal, low-key day and Kaleb and his siblings were playing in their bedrooms. All of a sudden, Repose heard a huge roar followed by a loud, jarring bang.

“Kaleb was in the bathroom and he said that there was a bad man coming through the door and he was gonna kill everyone; so he was trying to grab him. He hit the door and it made him hallucinate,” Repose says. “He seized, hit the tub and the toilet, both sides of his head, and proceeded to convulse. He almost died. He lost his bowels, bladder. He vomited, he was choking on it, not breathing. We almost lost him.”

After a hospital visit where doctors wanted to put him on more medicine, to which Repose refused, he was brought home and, soon after, his treatment with medical marijuana began.

“We already had the medicine in the cabinet from an acquaintance. We had been given it on the Fourth of July, but we were too afraid to give it to him because of the state he was in. We didn’t know how he would react,” Repose says, curling up on the couch. Kaleb sits on the adjacent couch, elbows resting on his knees, quiet and still.

Driven to desperation and disenchanted with the medical establishment, Repose pulled the cannabis from her cabinet a few months later.

A few months later, in 2014, they moved from Oklahoma, where medical marijuana was illegal at the time, to Rhode Island.

Kaleb saw Dr. Frederick John Jaccarino at Medical Cannabis Consultants and was given a medical marijuana license, with Repose as his caregiver.
He’s been using marijuana ever since.

Repose pulls out a thimble-sized purple frankincense oil roller and a bottle filled with a coconut oil-based marijuana tincture: Kaleb’s medicine, which he takes twice a day and as needed. They grow their own marijuana in the basement, giving them control over the ratio of cannabidiols (CBD, a compound in cannabis that is not psychoactive) to tetrahydrocannabinols (THC, the psychoactive compound). Plus, the stuff sold at compassion centers in Rhode Island has prohibitively steep price tags, with some users paying between $250 to $450 per ounce, and with little information regarding dosage or what works best for treating what.

The only other treatment he receives is from his Vagus nerve stimulator, an implant in his chest that sends magnetic pulses into his brain when swiped with a magnet.
With these combined treatments, his petit mal seizures have reduced from 500 to 1000 per day to twenty-five to 100, and the grand mals are increasingly rare.
“He’s gone 260 days without one. Before, he used to have one to two a week.”

Bill Cotton of B and B Consulting in Warwick, a center that helps patients get their medical marijuana licenses, sees people of all ages and backgrounds.

“There’s this perception that it was going to be twenty-year-old kids coming to get licenses,” he says. “But what we saw is that the majority of patients are between forty and eighty years old. There’s a scope of personality.”

Then, as with Kaleb, there are very young patients (usually with epilepsy) whose parents are driven to marijuana as a last resort.

“We have had some children in the medical marijuana program, not necessarily through us, most of them with epilepsy. One of the best things is to see a child go from having seizures fifty times a day to three. Before that, with every drug they used, they didn’t have a positive outcome,” Cotton says. “There is one woman who saw her daughter go from having so many seizures a day to three a day. I saw her daughter have a seizure, I saw her give her daughter the tincture and I saw the patient become seizure free and almost like nothing happened.”

There is no concrete reason why marijuana could help with epilepsy. A 2001 article from Epilepsia Journal states somewhat indecisively, “Animal and human research on the effects of marijuana on seizure activity are inconclusive. There is currently insufficient data to determine whether occasional or chronic marijuana use influences seizure frequency. Some evidence suggests that marijuana and its active cannabinoids have antiepileptic effects, but these may be specific to partial or tonic-clonic seizures. Further study of the pharmacologic effects is warranted.”

This language of “uncontrolled studies inconclusive” and “further study is warranted” is rampant in scientific journals, and will most likely continue to be the stance taken by the majority of the medical community unless there are drastic changes in marijuana’s legality, policy and availability for further research.

He will keep taking it because, as Repose says, “If you ask him about all the medicine he’s ever taken, which one made him feel the best, there’s only one answer he is gonna give you.”

Can You Spot All the Newport Locales in "The Gilded Age"?