We got an exclusive tour of the gorgeous new Idea House on Narragansett Pier. 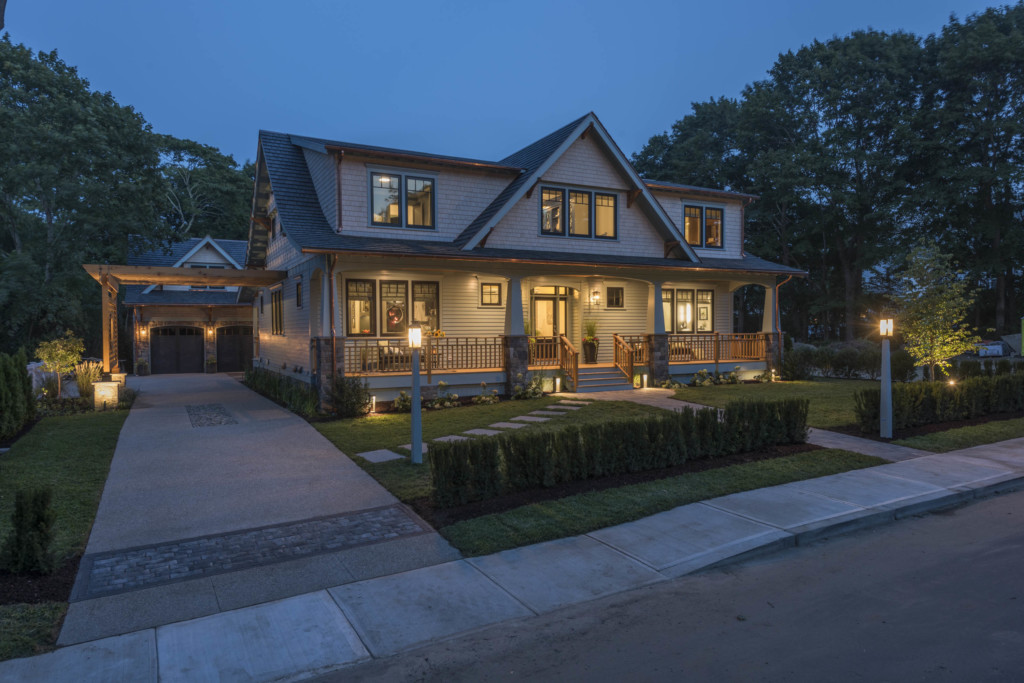 Rack your brain and your Pinterest feed for every home-related bell and whistle you can conjure, big or small. Open kitchen shelving, two-story living room, local artwork, exposed beams, secret book nooks, a sauna, an expansive front porch, top-and-bottom laundry, a teepee in the kids’ room: The 2018 Idea House in Narragansett, a new spec project from home improvement brand This Old House, Union Studio Architecture and Community Design, Sweenor Builders, Graceke Interiors and Landscape Creations of Rhode Island, has it all — right down to the funky ceiling wallpaper in the first-floor powder room.

Gardner is giving me a tour of the 2018 Idea House in advance of the grand opening celebration this Saturday, September 8, when the public is invited to visit the Narragansett Pier home, chat with the This Old House team, feast on clam shack fare from Monahan’s and jot down ideas for their own fall sprucing.

This is the second Idea House that Sweenor has constructed for This Old House — last year’s home was in East Matunuck — and the brand’s fourth in total. A segment will air for national audiences on PBS’s “This Old House” in October, plus a preview story in This Old House magazine in October and a sixteen-page story in the October/November issue.

During my visit, the shingled Craftsman-style house is buzzing with the final-hour push. Carpenters are finishing the front steps, landscapers are laying sod, and mounds of very fashionable decor — sourced from Idea House national sponsors including Article and Hayneedle, as well as local contributors Cabot House Furniture in West Warwick and O and G Studio in Warren — are islands in a sea of workers getting the job done.

Gardner says the team broke ground on the house, sited in a residential neighborhood five blocks from the waterfront, in late January. The foundation was made from energy-efficient insulated concrete panels from Superior Walls by Weaver.

The theme for the home, which will be sold after the grand opening celebration, is about “creating a small house that lives large,” Gardner tells me. When you enter the 2,700-foot main house (not small by most standards, but compact for the Pier), you step into a two-story living room with stone veneer fireplace and walnut bookshelves. The kitchen, with trendy open shelving and graphite custom cabinetry, is open to the main living space but also offers a tucked-away butler’s pantry with a stacked washer-dryer. The dining room, off the main living space, is like an upgraded breezeway: Its massive windows overlook the back stone patio and yard, complete with a Soake Pools plunge pool.

Also on the first floor is one of two master en-suites, which during my visit are yet to be fully staged but hint at gender-neutral color schemes. The second level features an open balcony adjacent to a workspace with a window seat and a very chic built-in bookcase made in Sweenor’s cabinetry and millwork shop in Narragansett. Gardner tells me that built-ins are Sweenor’s calling card. The team’s talent for creative use of small space is also on display in the very cute kids’ room. In addition to the aforementioned teepee, a bunk bed and a textured wallpaper mural, the room also features a cubbie/closet with build-in shelving — a dream hideaway for the young book worm.

Gardner then shows me to the ground level with a small Finlandia sauna, workout room and media room. We then head outside beneath a covered walkway to the guest quarters above the garage. The star feature of the space is a Zoom-Room Murphy Bed — a retractable Murphy bed on steroids that, with a touch of a button, descends from behind a permanent wall with a mounted flat-screen television. As we poke around the space, Sweenor’s president and CEO, Jeff Sweenor, is putting the finishing touches on the millwork.

Gardner points out a colorful work of art above the staircase in the guest quarters: a photograph of a peony printed on aluminum by Rhode Island-based artist, Victoria Mele. The artwork throughout the main house and guest quarters, Gardner tells me, is curated by Newport’s Jessica Hagen Fine Art and will be up for sale at the grand opening celebration this Saturday.

Here’s a sneak peek around the Idea House:

To see the big reveal for yourself, head to Narragansett this Saturday, September 8 from noon to 4 p.m. for a free tour during the Grand Opening Celebration. Guests are encouraged to take the free shuttle service from Pier Middle School at 35 South Pier Road, Narragansett, to the Idea House on Robinson Street. To learn more about the project, visit thisoldhouse.com or sweenorbuilders.com.