This Little Compton estate grew from a few clippings into a lush, colorful paradise. 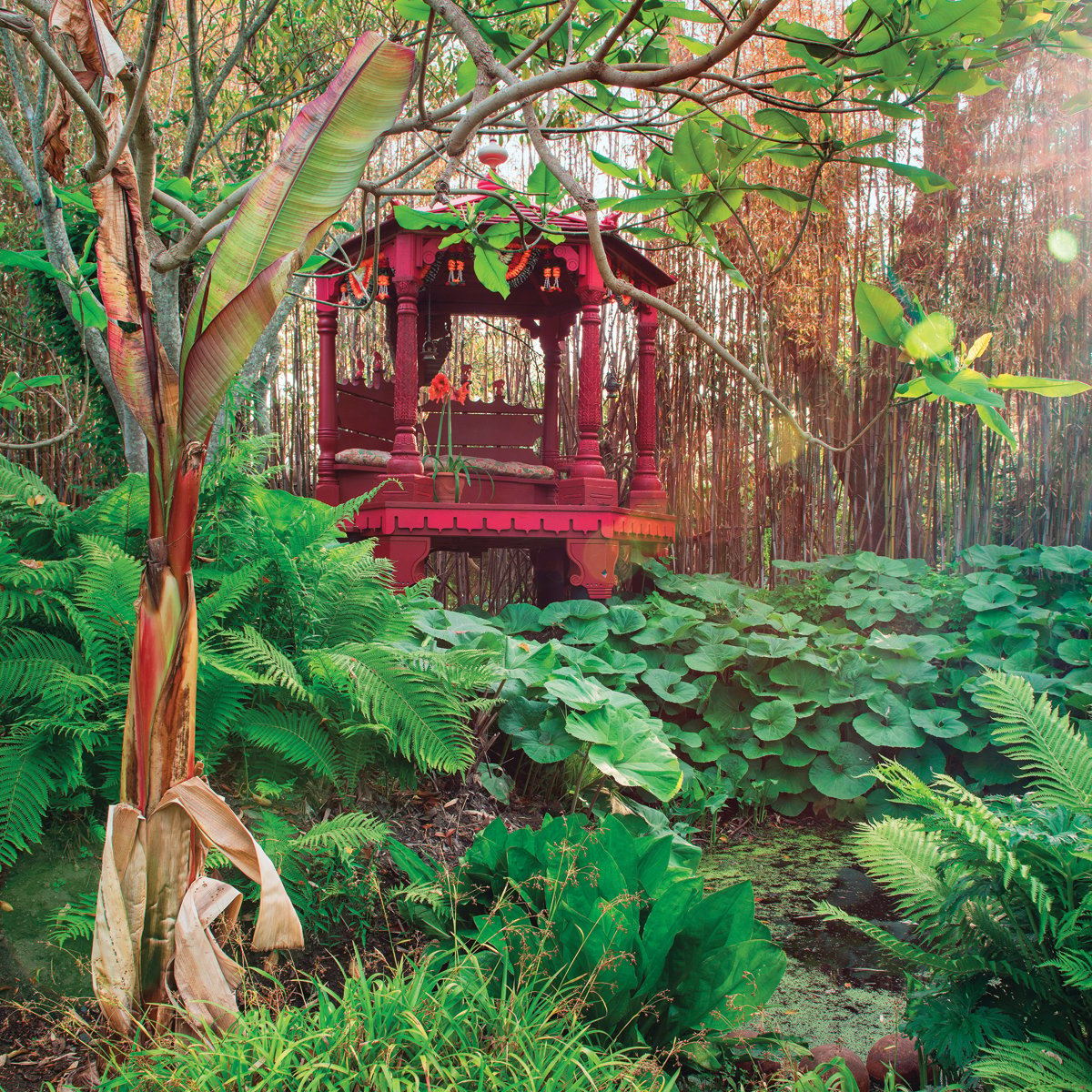 A teahouse imported from India is the centerpiece of the Subtropics area and provides a view of multiple topographies within the garden. Photography by Nat Rea

Strolling through the Sakonnet Garden on an early summer morning, it’s nearly impossible to imagine that the acre-plus labyrinth of lush lawn and overflowing beds started with just a few four-inch cuttings some forty years ago. Back then, owner John Gwynne was a budding landscape architect in New York who made a hobby out of collecting plants that weren’t available locally. He would acquire plants through organizations like the Massachusetts chapter of the American Rhododendron Society and from as far away as sellers in England, bringing his finds to his family’s summer home in Little Compton, where he spent weekends nurturing them.

“I never intended to create a garden, just a nursery to experiment with growing plants that no one was trying to grow in Rhode Island. But then, as many of them grew, we needed a place to put them,” Gwynne recalls.

He and his partner, Mikel Folcarelli, turned their attention to a large thicket on the property and began clearing space, as needed, for the collection.

“Little by little, we began to create a garden, and then expanded north and south a little bit and then a little bit to the east and west,” Gwynne says.

The garden evolved organically. Although both men were working in design-related fields at the time — Gwynne created displays for the Bronx Zoo while Folcarelli designed retail displays in NYC — they never approached the garden with a grand plan in mind. Instead, as they introduced more plants, they cleared pathways from one bed to the next, moving trees and rearranging groupings as they went.

It wasn’t long before the two found themselves fully immersed in the project. In the car on the way back to the city each Sunday they would excitedly discuss which plants were their favorites that week and what they wanted to work on next.

“We had all week to think about the garden. That was our go-to fantasy place, commuting back and forth, so it developed more slowly but more thoughtfully,” Gwynne says.

The look of the garden grew as much out of necessity as aesthetic design.

Wind, they found, was a constant threat to their beloved collections of plants like rhododendrons and camellias. So they began to build walls to protect them, partitioning the former thicket so that little “rooms” began to take shape. It was a practice in determination and patience. One stone wall took Gwynne fifteen years to complete, while a ten-foot-high boxwood hedge that started as rooted cuttings grew over a span of almost forty years.

Within each room, themes began to emerge. Some, like the Subtropics area filled with exotic ferns, a forty-foot-high grove of bamboo and a banana plant that is brought inside each winter, were born out of Gwynne’s experience creating animal environments at the Bronx Zoo and Roger Williams Park. Others, like the Yellow Garden, with its yellow rhododendrons, Welsh poppies and orchids, and the Punch Bowl, a circular spread brimming with rhododendrons in varying red and pink hues, stick to a monochromatic color scheme.

Around every corner is something new to see, some unexpected tableau that gives visitors the sense of being transported to a new place where every detail has been carefully considered.

Entering the garden, visitors are greeted by a scene plucked right from a woodland fairytale: a carpet of moss and ferns divided by a pea stone path and shaded by a cluster of crabapple trees, the last remnants of the area’s original thicket.

Further in, a low-lying bog — cleverly lined with plastic underneath to trap the moisture — is home to water-loving Alaskan skunk cabbage that gives the space a swamp-like effect.
The shaded area lies in stark contrast to more refined spaces, like that of a tapestry hedge made of various types of plants clipped together, or a row of Black Swan beeches trained over metal hoops. In the summer, the rare plants turn a nearly midnight hue, making the passage underneath them all the more dramatic.

Details like fencing made out of garden hoses, a watering can hidden inside a stone wall and shovel handles used to mark an area’s entrance give the garden
a whimsical feel.

As complete as the garden may look to the untrained eye, Gwynne and Focarelli say it’s a constant work in progress to make sure there’s the right balance. Sometimes mature plants that are making too much shade have to go and smaller varieties are brought in.

“We are always looking at how to keep it fresh,” Gwynne says.

The two are constantly trying new things, too, like the topiary Rhode Island Reds made of slow-growing barberry that they have coaxed into shape for the past few summers.

It’s been easier to work on such projects since Gwynne and Folcarelli made the decision to move to Little Compton full-time a few years ago. They now have more time to devote to the garden, which requires work year-round, even in the off-season.

“Winter is actually a great time to get in there and prune when you aren’t stepping over flower beds,” Folcarelli says.

This past winter, their task list included removing a few forty-year-old trees that were creating too much shade.

According to Folcarelli, now that the garden is mature, the workload is less than one might think.

“It’s knowing when to do what. Every plant has its own schedule, so it’s not as daunting as it seems because we created it so we know what needs to be done.”

Still, it’s nice to have help when you can get it. Each spring a large group of volunteers, mainly family and friends, descends on the garden to whip it into shape ahead of its open weekend, when Gwynne and Folcarelli invite the community to come and walk through. Opening up the garden is a way for the two to not only share the otherwise hidden gem with their Rhode Island neighbors, but is also an opportunity for them to pause amidst the constant upkeep and appreciate their labor of love, Folcarelli says.

“People often ask ‘Do you bring a glass of wine outside and enjoy the garden?’ and the answer is no. It would be like eating lunch at your desk. The time when we really get to enjoy it is when we are giving a tour. That’s when we really look at things with pride. People always come out with a big smile on their face and that is a real accomplishment.”

Sakonnet Garden, with the Garden Conservancy, is open to the public May 20–21. Details with entrance fee info are at sakonnetgarden.com.