Saying Goodbye to the Bounty

The memorial began at the Fall River Marine Museum, with a gathering to remember the life of the ship and those who were lost. 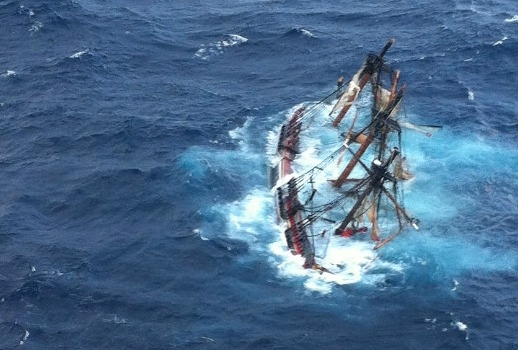 On a cold December morning, with snowflakes drifting down from the gray sky, the fact that we live on the edge of a wide, wild sea is far from the thoughts of most Rhode Islanders. We're used to thinking of the ocean as beach blankets, boogie boards and breakers, a summertime thing. But for those who've gone adventuring far from shore, the sea takes on a bigger, richer persona — more exciting, more real and more dangerous.

A few hundred folks were reminded of that on Saturday morning, as we gathered on the bow of the huge battleship Massachusetts, hard below the towering Braga Bridge, to drop three wreaths into Mount Hope Bay. Dozens of those on deck had served as crew aboard the tall ship Bounty, lost at sea on October 29. They knew that ship, from stem to stern. They knew the exhilaration and the anxiety of climbing up the rigging and out upon the yards to set the sails, and the weariness and wonder of days and nights on deck watch. They knew the special friendships forged in close quarters where each must depend on the other, and they knew the strange sensation of sleeping in a narrow bunk in a small ship steering across an endless sea.

Some of those on the bow were aboard the Bounty when she sank. Most of the crew was rescued by the Coast Guard, but Claudene Christian died and Captain Robin Walbridge was never found. The ship had sailed from New London bound for her home port of St. Petersburg. But off the coast of North Carolina, about ninety miles out to sea, the ship took on water, the engines failed, and the wind and waves of Hurricane Sandy drove her down. 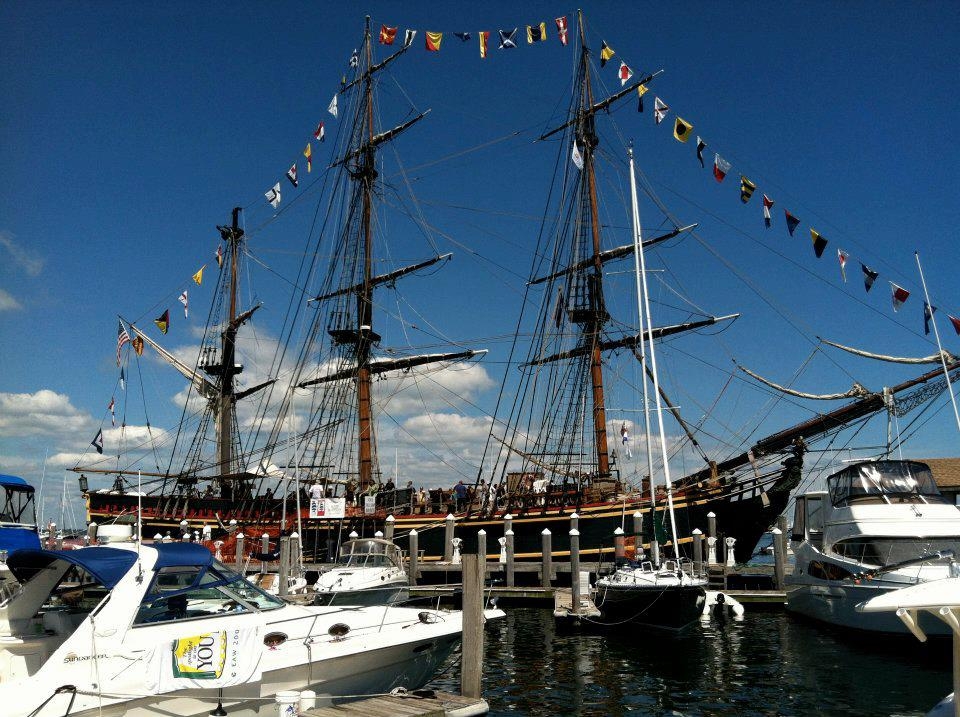 The memorial began at the Fall River Marine Museum, with a gathering to remember the life of the ship and those who were lost. Tales were told, poems were read, songs were sung, laughs were shared, tears were shed. Many former sailors wore crew sweatshirts, rubber boots and caps with the Bounty logo from their days on deck. Others dressed in traditional, formal uniforms of navies past. A few wore the dress blues of today's Coast Guard.

The Bounty lived in Fall River from 1993 to 2001, and was often seen in Newport. She was there last summer, sailing up the coast in company with the barkentine Gazela, a sail-training ship carrying a half dozen Rhode Island teachers who embarked in Philadelphia. The crews played pranks on each other, laughed and sailed together, and celebrated at the end of their voyage. They shared the experience of life at sea, where you learn how it feels to ride a rocking ship over rolling waves, and you discover that the ocean is deeper and broader and more mysterious than you ever imagined from shore.

We all fell in behind a marching band from the Colonial Navy of Massachusetts for the short walk in the falling snow to the docks, then crossed the wide teak deck of the massive warship. After a final song and a prayer or two, friend of the ship Joe Perreira found a high spot to stand on and spoke in a booming voice that carried in the cold damp air. "Three souls were lost that day," he said, as the crowd stood silent. "The captain, Claudene, and the Bounty herself."

From beneath the Braga Bridge, we watched the three wreaths drift off on the steel-gray waters of the Bay. And we all were reminded that while the sea and sky go on forever, our time on Earth is short. That's a truth that all sailors must face, and on this ancient spinning planet, all of us are sailors.

Photos courtesy of the U.S. Coast Guard and the Bounty facebook page.