Saving Superman, One Tour at a Time

A look inside Providence's most iconic — and controversial — vacant building.

He towers above us all, providing a watchful eye on the goings-on on Westminster Street, peeking out towards Narragansett Bay, even glimpsing wisps of steam from somewhere in Johnston.

Providence’s Superman is the former Industrial Trust Bank building, a domineering presence in our skyline. It is called the Superman building for its resemblance to the Daily Planet building in the "Superman" comic, and the nickname is pretty much used by every Rhode Islander I’ve ever met.

Its Art Deco style was built upwards, inwards, upwards, and its umbilical cord was cut in 1928, a year before the 1929 stock market crash. The building burst into the world on the back of a bear.

It survived recessions, floods, hurricanes and snowstorms, but today it faces its biggest challenge yet: uncertainty. Bank of America, which inhabited the space, left in 2013 and now the building sits vacant.

Just what will become of Superman?

The debates are heated, with some believing it is a drain on taxpayer dollars, others wanting it to be restored and turned into apartments, while still others think it should be saved, but not with tax money.

A dedicated crew of history lovers have banded together to help “Save Superman,” and their weapon of choice is not super-human strength or flying capabilities, but guided tours led by members of the Providence Preservation Society. 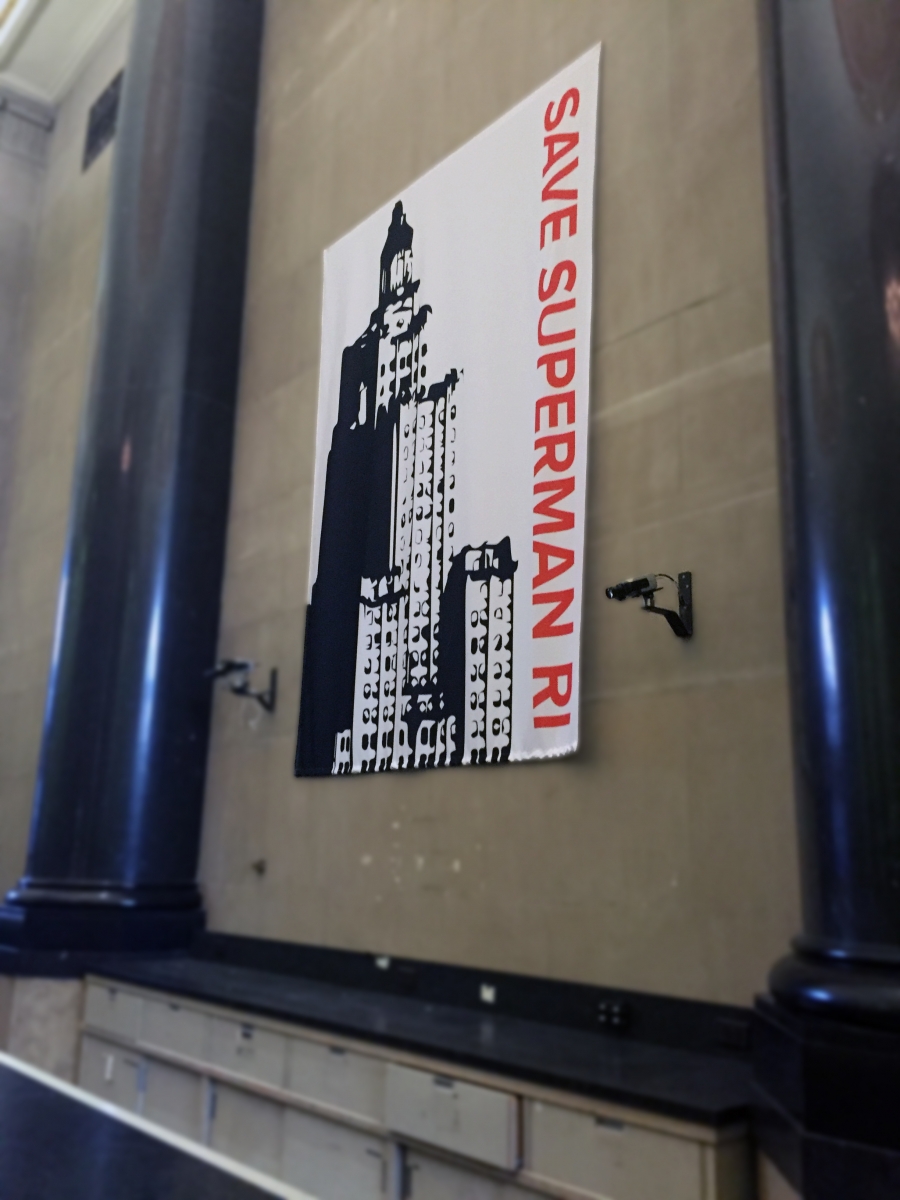 To see just what they were up to (and okay, to sneak a peek inside arguably one of the most iconic buildings in Providence), I took one for the team and on an extraordinarily hot August evening, found myself sitting in Au Bon Pain at 100 Westminster. The tours began at 6 p.m. sharp and the anticipation was so great that even at 5:45, time ticked by slowly, dribbling along like the sweat tracing a line down my spine.

I munched on my sad excuse for a vegan wrap and puzzled over my life choices. Wait, it was 5:50! Better get moving. I shoved the rest of my wrap into my bulging bag, fished out a pen and pad of paper and high-tailed it all 100 feet to Superman.

I flashed my business card at a guy in pink plaid bermudas, who I later found out was just a regular dude, and entered the building. The tours begin near the elevators, where participants sign in and receive a colored card that puts them into one of the tour groups.

I was on tour with Jenn and Brendon, two smiley and extraordinarily patient guides, and as they waited for the rest of our group, I milled around the stunning but desolate grand lobby, arguably the heart of the building’s past activity.

Blind security cameras lined the walls, clock hands stayed pinned to times past, and on the tables with pens for signing checks, the date is frozen in white letters: Fri. Apr. 12. 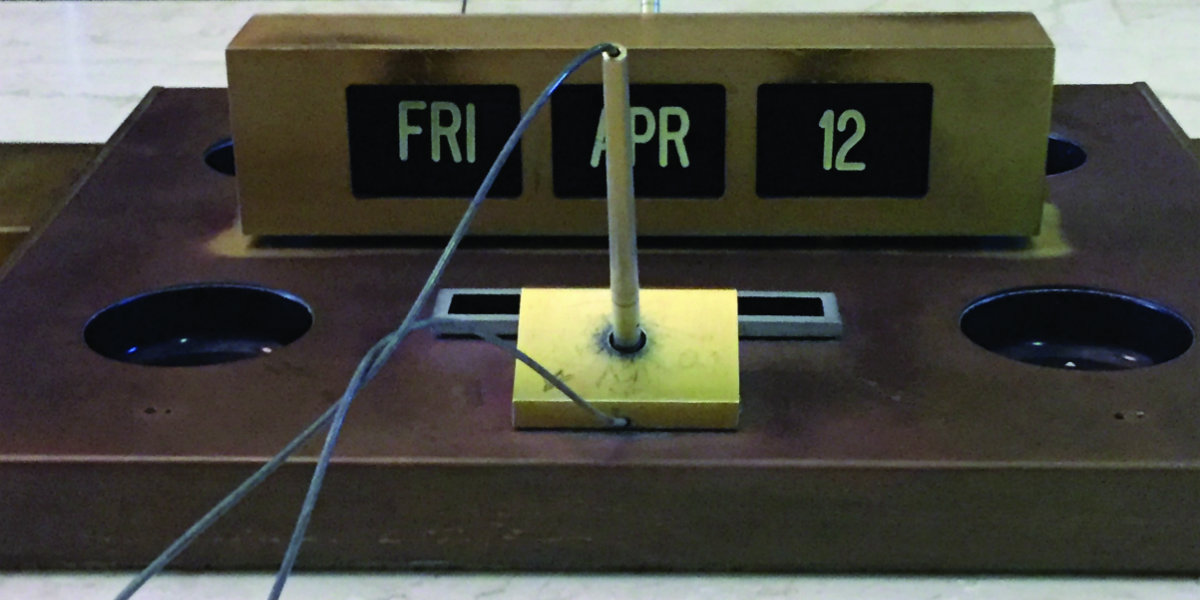 Time has stopped. A post-apocalyptic quiet fills the interior, with paint peeling from the ceilings, wires sprouting from the floors and teller tables vacant, dusty. But it was not always this way.

It was during this period of prosperity that banks sprouted like weeds, with four other banks built in a two-to-three block radius.

I imagine the debonair bankers of the '20s sitting behind desks with horn-rimmed glasses and shiny black vests, while ladies in caps and stockings sashayed in to fund their latest pair of earrings.

“At one point, the bank had $6 billion worth of items, including costume jewelry, cash and goods stored in the many safety deposit boxes,” Brendon tells us. He leads the group downstairs to the vault where the $6 billion resided.

We walk across a carpeted room with vanilla decor lifted from the '90s, down a set of stairs and through a metal gate with a clock set overhead.

Through the gate is the vault, guarded by a massive, seventeen-ton door and an odd metal tube protruding from the right side of the opening.

“This vault has never been robbed, and was advertised as ‘impregnable,’ ” Brendon says. Unlike Superman, it has no kryptonite.

The only way to open it was to look through the metal tube, adjust a series of lenses to see the lock, and enter the combination by turning the knob on the outside of it all. In short, no one could watch and memorize the lock code.

Today it is splayed open, papers litter the floor and safety deposit boxes bare their interiors. 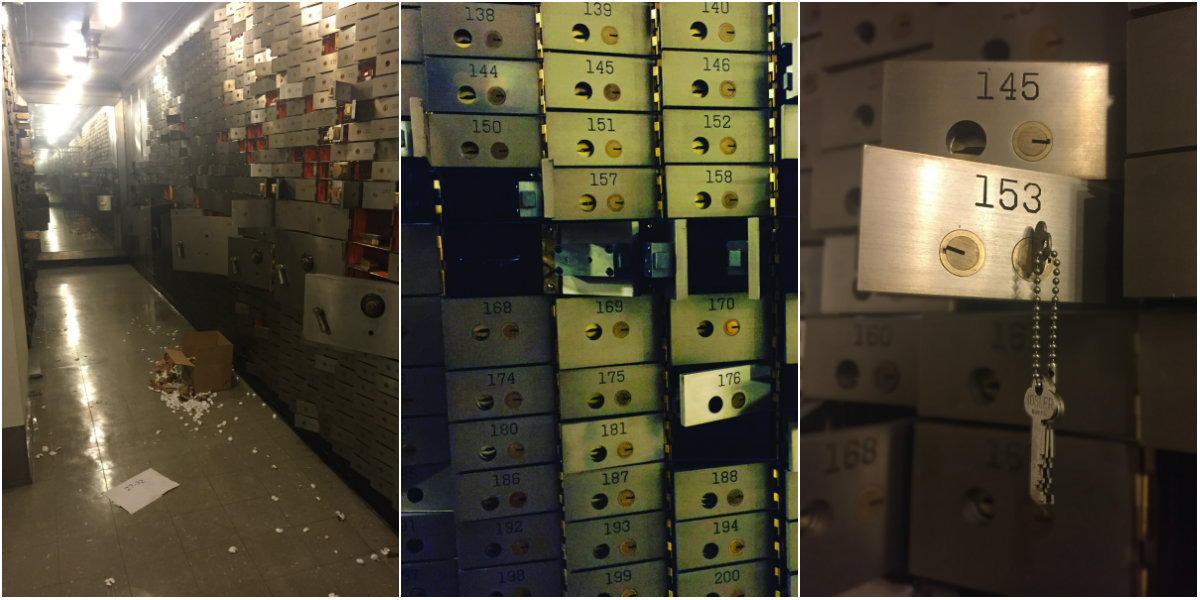 Murmurs of “I feel like I’m in Gringotts” and “This is like Harry Potter!” abound as we explore the gutted vault. We are in the bowels of the building, the metal-lined intestine chamber where money flushed through like, well, maybe that analogy is best left unsaid. I prod at old safety deposit boxes and catch sight of someone who looks eerily like me — oh wait, it is me. Large mirrors line the walls, built-in security so anyone accessing their bundle of dough could see over their shoulder without any effort. Paranoia was encouraged here.

“When Bank of America left, there was $3 million worth of cash and goods left unclaimed,” Brandon says. Unfortunately for us, the money is no longer here, but no one seems to know just what happened to it. This doesn’t stop a few hopeful souls from pulling open safety deposit boxes and scanning the room with hungry eyes. I admit, the idea of pulling open a creaky metal box and finding a $10 bill was mildly thrilling.

But it’s not all money and power for Superman. Emerging from the vault, through the vanilla room and up the stairs, you are hit with a gorgeous display of artistry. Braided metalwork embroiders heavy black marble, while three sets of ceiling murals display the zodiac, the days of the week and the four winds and seasons. 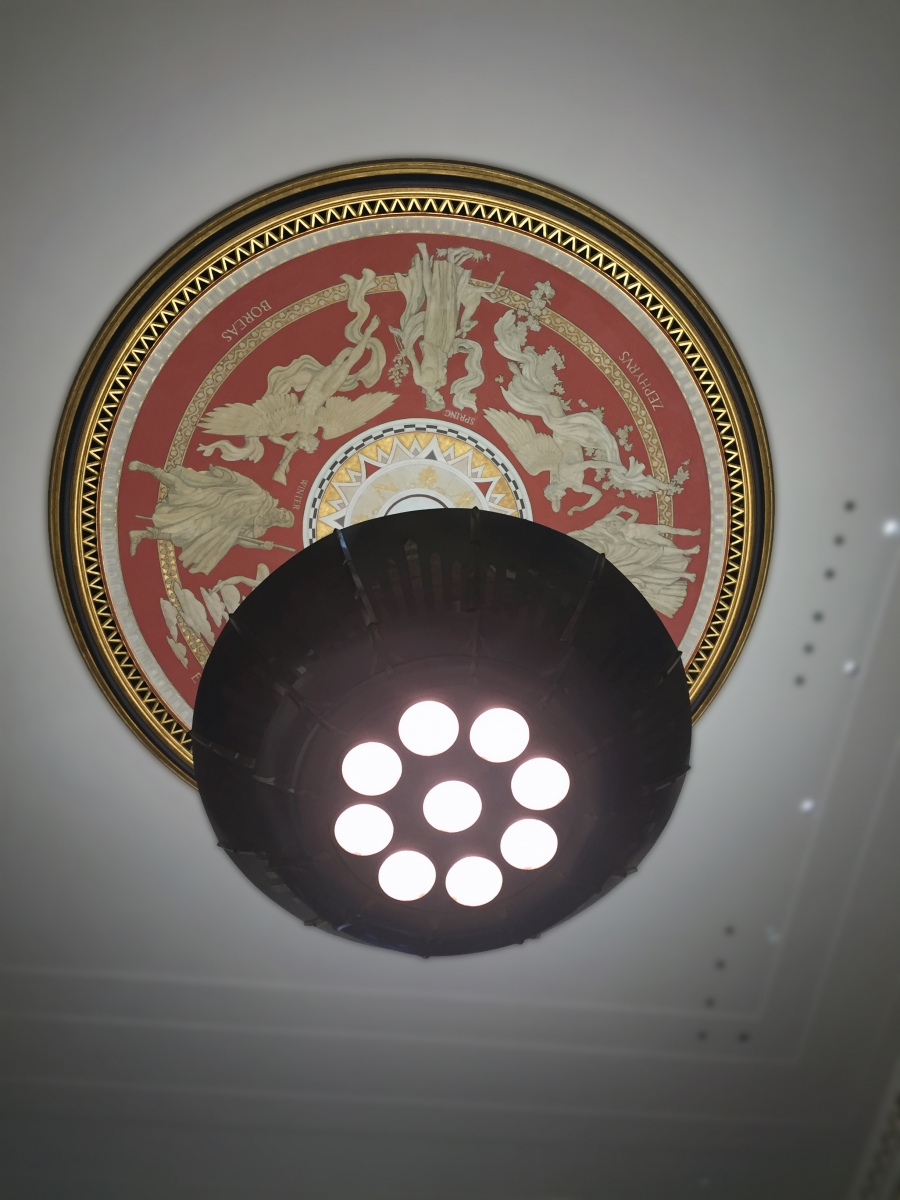 After loading up on water bottles that the lovely tour guides have stashed in a cooler, we wipe the sweat from our brows and head outside.

The top of the building disappears from view as we make our way to the former entrance, which is guarded by magnificent bronze doors. Carved murals of industry are etched above, with utopian and almost Soviet-like figures building cannons, running a steam mill, bolting together automobiles and spinning fabric. Industry and banking were kings.

We file back indoors, where it is surprisingly cooler due to the massive quantities of marble, and grab more water bottles. Jenn and Brandon warn us that our next stop, the twenty-fifth floor, is hotter than hell on a summer day. “We’re gonna look like we’ve been on a safari in a tropical place,” Brandon says, grinning. I grab another water bottle, just in case.

We pile into small, gilded elevators with Art Deco details and are thrust upwards at 800 feet per minute, climbing to the twenty-fifth floor in thirty seconds.

Emerging into the foyer was like entering a sauna, sweat temporarily blinding me and my shirt unexpectedly covered in ink. Turns out every time I scribbled down a fascinating fact, ink spurted onto my shirt, cementing my role as crazed journalist in an urban jungle. Looking like a heathen, I strode across the room, towards a window and towards the eye of Superman.

My sorry state melted away from my consciousness. Seeing through the eye of Superman was breathtaking. The view cuts across the river downtown, the Providence River Bridge swarming with cars and the faint trace of Fall River visible in the background. People the size of ants mill around below, blissfully unaware that their every movement is visible from this high peak. 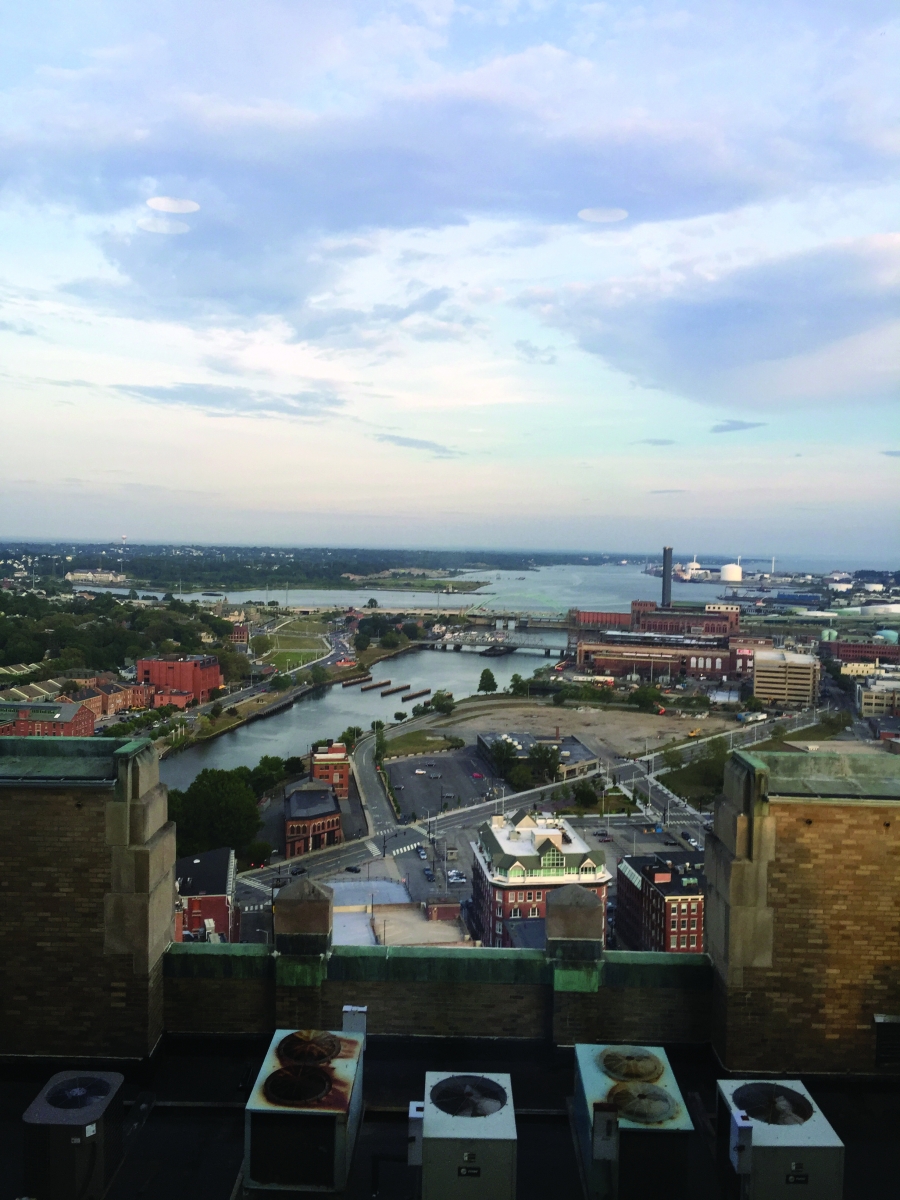 “Wow,” is the only word that comes to mind, as evidenced by my ink splattered notes.

Light-headed, sweating and giddy with my new set of eyes, I have a brief moment of clarity about why we are on this tour, why people want to "Save Superman." It turns out saving Superman isn’t about making apartments, relocating tax dollars or even breathing new life into an old building. It’s about preserving a slice of history, a view into times past that forever looks on time present. Meta.

I spiral back down from my cloud, onto the elevator, down to the first floor and stumble into the waxing evening, Superman watching all the while.

Take your own tour and see through the eye of Superman by visiting savesupermanri.org. Tours are free, but you must sign up in advance.