Satisfy Your Need for Speed at R1 Indoor Karting

The 90,000-square-foot karting complex is the largest facility of its kind in the United States.

I am in a red go-kart on the track at the newly opened R1 Indoor Karting center in Lincoln, Rhode Island. The first time around the roadway, the vehicle is on the lowest speed to help me get my bearings around the tight, slick turns; slick enough to drift around the corners and float over the soft, porous black track. The steering wheel is firm, and for the first couple turns, I have to pull hard to make the swing. The last turn brings me to a straightaway. I gun the engine.

The kick of acceleration into the next turn rips a laugh from me.

The 90,000-square-foot karting complex was converted from the former Dean Warehouse, and it’s the largest facility of its kind in the United States. The joint venture between Michael Bromley, the owner of the building, and Michael Hezemens, a Formula One racing champion, introduces a European-style karting experience to the area. 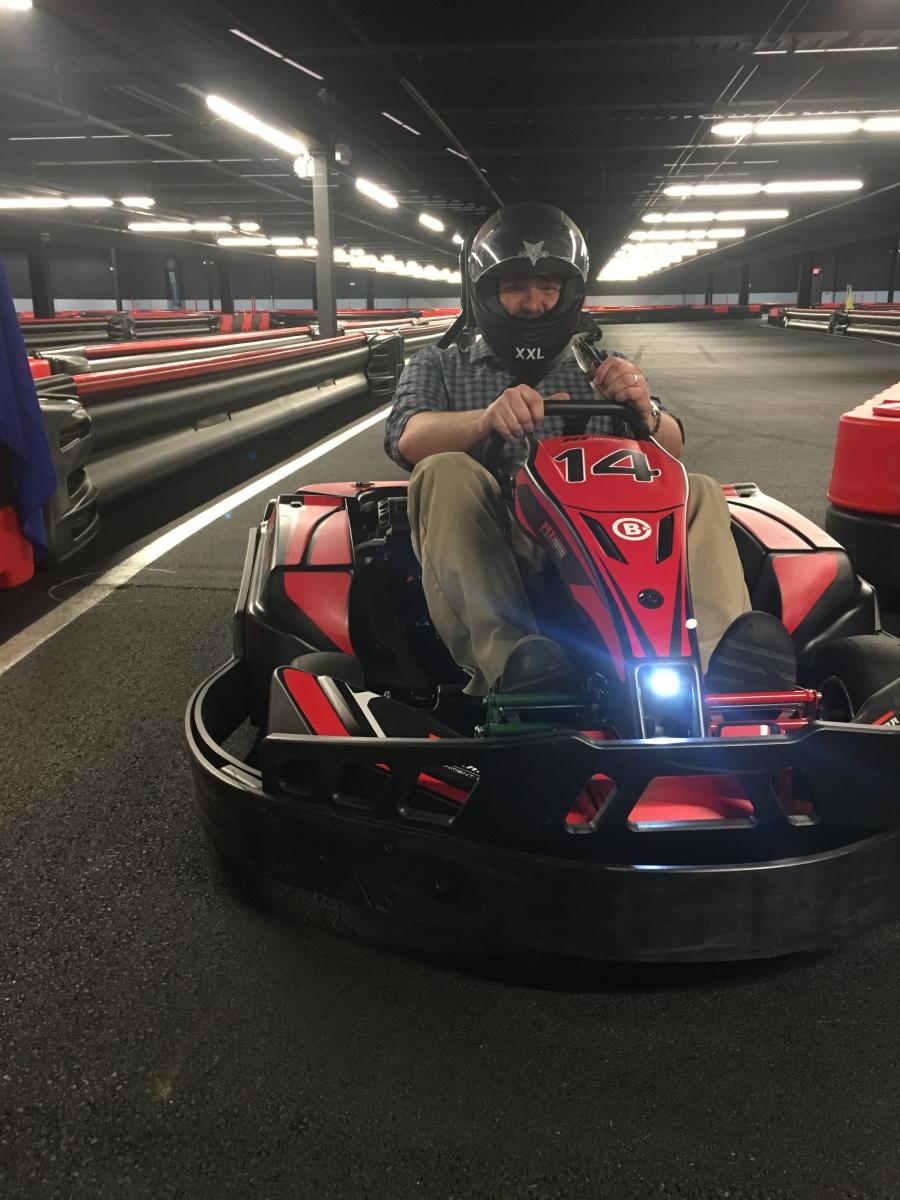 It is the hope that it will serve as a destination for tourists and families from all over New England and beyond. It is also the hope that this will serve as a revitalizing enterprise, one that needed no government assistance in order to build. The center has already established 200 construction jobs, and it’s planning to bring in seventy-five-plus part-time and full-time jobs, once completed. Hope is in the asphalt that the tires of my kart squeal on as I speed.

On the third lap, I get the feel for the turn. I drift to a corner in the middle of the building and get my first whiff of the rubber burning beneath me. It is harsh and sweet at the same time. The track has been expanded and rerouted slightly. I am on what is normally the children’s track, where kids up to age twelve can get a slower, simpler feel of R1’s karting, under the supervision of employees.

Above this area is a proposed restaurant, which will have a racing theme, an open-air kitchen and a rotating Pavesi brick oven for making pizza. Next to that will be a bowling alley. Permit-pending, they will also create a rope-line course, but that’s not definite yet. There is a balcony lookout where parents will be able to watch their kids race while enjoying a drink or a freshly made pizza.

R1 Indoor Karting is bringing "extraordinary ideas and things that Rhode Island hasn’t seen yet," says Joe Lembo, the marketing consultant who led me on the tour.

What is European style? The karts are low to the ground, with Tesla-inspired engines and design, and they are obsessively engineered with green technology. The rapid recharge stations sit like tiny gas pumps along the pit area. "Not like what you’d get at Rocky Point," says Lembo. I remember happy summers amongst the fried clams, deafening bumper cars and ricketing roller coasters with rust on the rails, but I see what he means. The raceway as a whole is clean and sleek and fast.

Also, the safety video specifically forbids scarves on the drivers, which strikes me as very European indeed.

R1 mechanic Curtis Aric set up my test run. He’s been involved in manufacturing and blacksmithing, running his own shop at times. He has worked at the Steel Yard as an artist. He’s excited to talk about R1. "I've taught no less than a dozen kids to drive," he says. They’ve been open for only six days. He says he gets on top of the kart and gives them a small test. By the time they are on the second lap, they’re driving on their own. "It’s like driver’s ed!" he says.

"When you do hit a wall, don’t get nervous," says Aric. "The karts and the walls are very strong."

"Can’t wait to see that written up!" he says with a laugh.

It’s the final time around the track that it happens. Thunk. I hit one wall. BAM. Then I rebound into the opposite wall. It barely registers. The screech is muffled by the helmet on my head. My hands are gripping the wheel with everything I have. My body is on fire with acceleration and exhilaration.

Curtis waves me down at the end with a yellow and black checkered flag. He asks how I feel. He put me up to top speed at the end, level four. He opens the engine for me. He speaks like a kid in a candy shop. He points to the brakes, turned blue from use. He makes me feel the heat from the tires, like a frying pan set to cool for just a minute.