The K-9 captured our hearts and a Rhode Islander of the Year award. 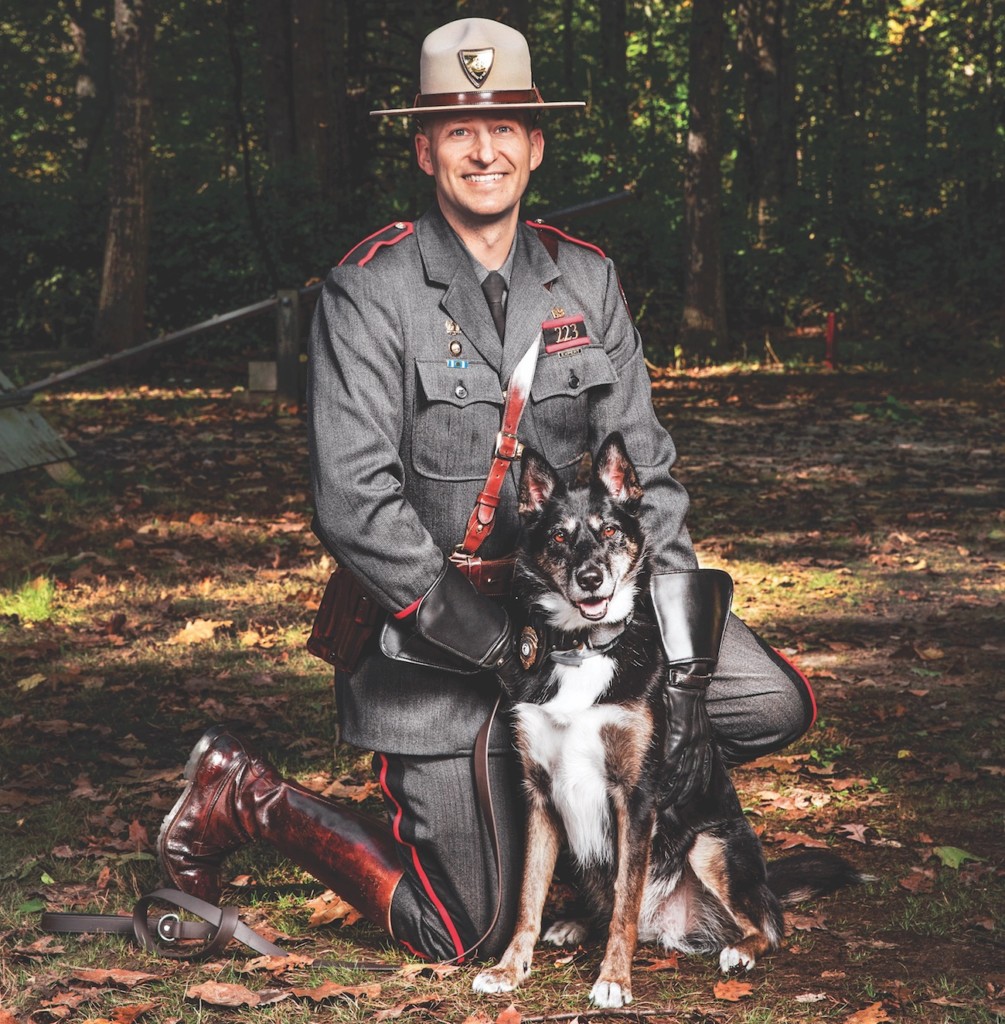 Trooper Daniel O’Neil and Ruby pose for our “Rhode Islanders of the Year” cover story. (Photo by Alex Gagne)

There’s a reason why people jump into action on social media when a dog goes missing. Most of us know what it feels like to lose our best friend and fear she’ll never come back. And Ruby — well, she was a best friend to all of us.

The rescue dog-turned-rescuer, who made the cover of our annual Rhode Islanders of the Year awards with her handler, state trooper Daniel O’Neil, took off on Monday morning at Goddard Park in Warwick, according to a Facebook post by the Rhode Island State Police that was shared more than 3,600 times in just a few hours.

Some commenters wondered how a trained search and rescue dog could take off like that. Ruby can’t explain herself, but it’s easy to speculate: She’s a little rascal; always has been.

Early in her life, Ruby was returned to the Rhode Island Society for the Prevention of Cruelty to Animals not once, not twice, but five times for unmanageable behavior. She was destined for euthanization. But the RISPCA and the state police saw something in her and, after a year and a half of faithful training, Ruby proved to be a damn good police dog, tracking down criminals and lost loved ones like it was second nature. She even earned a national Hero Dog Award this summer for her search and rescue efforts, walking the red carpet in Hollywood and appearing on the “Today” show. In between, she sat very still and posed for a cover photo for our annual “Rhode Islanders of the Year” issue, on newsstands now. (Pick up your copy to read the full story.)

We should’ve known. Ruby’s a down-home girl, not a Hollywood celeb. She’s a mutt in a sea of highly trained police dogs, nipping at the hands of her ever-patient handler. She made it when, time and time again, us humans told her she couldn’t. She represents something true and beautiful: We can achieve great things, no matter where we started out in life. We don’t have to lose ourselves in pursuit of greatness. We can still be a little wild. Watch this clip from the “Today” show and see what I mean:

But sometimes being ourselves means getting into trouble and, no doubt, Ruby’s escape on Monday scared the hell out of O’Neil, who not only trained Ruby from the very beginning but welcomed her into his family. “Ruby had such an unstable and chaotic first eight months of her life,” O’Neil told me in our “Rhode Islanders of the Year” interview. “She was bouncing around like a foster child. She was lashing out. She didn’t know who would show her love.” O’Neil showed her love, and she flourished.

Ruby gets this, and it’s clear she loves O’Neil right back. After fifteen hours on the lam, Ruby found her way home — well, almost. Early this morning, around 1 a.m., according to a report in the Providence Journal, Ruby was discovered in O’Neil’s neighborhood. A highly trained police dog might’ve gone home, sure, but that’s just not our Ruby. She couldn’t resist a little more mischief. In the middle of the night, Ruby bounded up a neighbor’s porch and barked at the door, prompting the family to call the police. O’Neil was alerted and brought his rug rat home. A state police corporal told the Journal, “We can all rest easy now.”

Sorry to say, Ruby, but the vacation’s over. Hopefully you won’t have to get on an airplane, pose for photos or get scolded by talk show hosts anytime soon. But if you do, we won’t blame you for taking some time to let loose and be free. We’ll love you either way.