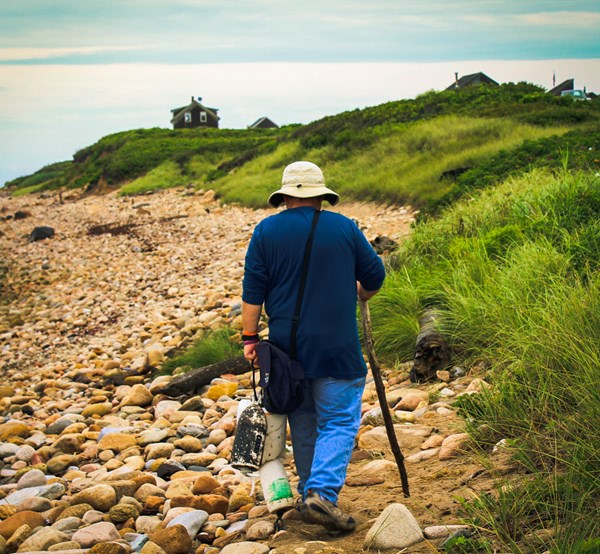 A first taste of Del’s Lemonade at Brenton Point; Newport’s illuminated, orange skies at sunset; and clams beautifully sprawled against the East Matunuck shoreline were just a few of Rhode Island Monthly’s Summer Photo Contest entries that captured the magic of a Rhode Island summer. However, Sara Schmidt’s winning photo, “My Dad’s Love for Life,” reveals not only a captivating shot of the Block Island shoreline, but a beautiful story.

Sara Schmidt felt inclined to photograph her father that day on the beach. “Something in my head and heart told me to take photos of my dad,” she says. “I felt like that was going to be the last family vacation on the island.”

Her father later died on April 3, 2018, after a long battle of Multiple Myeloma, a bone marrow cancer. The photo symbolizes their last walk on the beach together; her father is shown walking ahead, holding the buoys that he collected from the day. The vibrant greenery contrasts with the cool, toned stones that her father walks steadily over, all set underneath a calm, blue sky. For Sara, the photo illustrates their cherished father-daughter walks and her father’s love for nature and collecting the buoys that washed along the shore.

The photo tells a story that many viewers can relate to, Sara explains. “I feel like my photo told a story, a story that entails what it’s like going through life with a family member with cancer and how family trips are really important.” At the time, Sara’s father was undergoing chemo treatment, but he continued to walk the Block Island shoreline, and Sara continued to take shots that captured their time together.

“When I took that photo that day, I knew it would have sentimental value in the future,” she says. “It shows a true warrior, a man, who despite three relapses of cancer and then another one, pushed himself through and kept a positive attitude despite what was thrown at him. My dad was a true warrior and I wanted people to recognize what a true warrior and fighter looked like.”

For Sara, winning the prize to Ballard’s on Block Island is priceless. It’s no coincidence that Block Island is a place of great significance for her and her family. “I also believe that this was a sign from my dad,” she says, “telling me that I can enjoy a vacation on Block Island and that he will be there with me every step of the way.”

12 Tips for a Happier, Healthier You