Amy and Larry Dressler sit inside their office trailer testing out the next flavor for CrunchLina’s snackforce. They already have original, maple and apple-flavored snack clusters, which include nuts, raisins and seeds bound together with the spirulina, rather than using sugar or agave syrup. They are non-GMO, gluten free, no sugar added, paleo, vegan and keto.

Two bags on the table contain the next flavor possibility.

“This is pumpkin spice,” says Amy, who works on producing new recipes for the brand. “Each one has a different formula in terms of the ratio of pumpkin.”

Bag one has a much more pronounced spiciness, while batch two has a faint pumpkin flavor, but not as much spice. The spicier example appears to be the winner.

“We’re joining the bandwagon of every other food company,” Dressler says with a laugh. agcoretech.net; sunfreshproteins.net 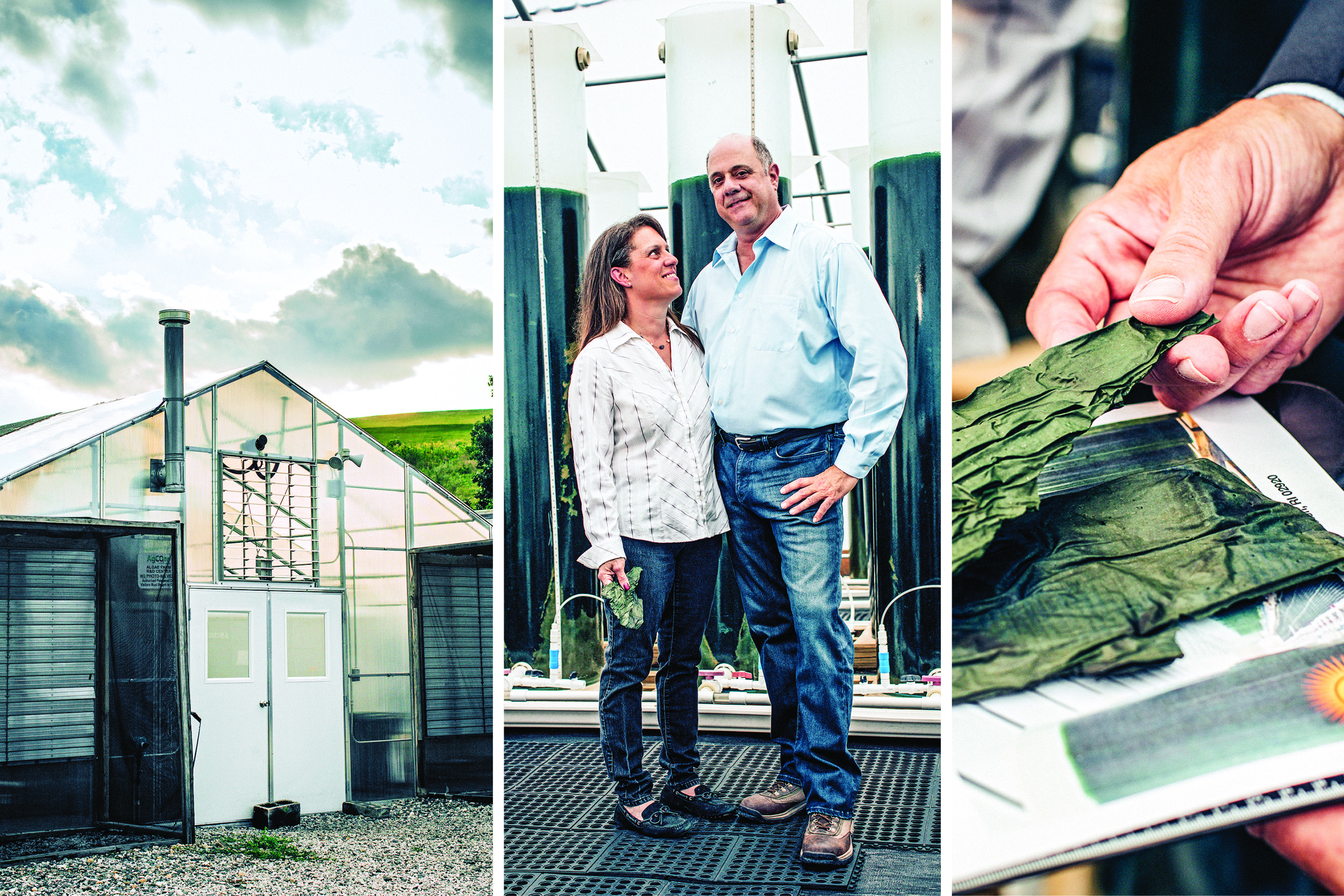 Left: The Agcore greenhouses are located near the Cranston landfill. Middle: Amy and Larry Dressler at Agcore Technologies. Right: Algae is dehydrated before being transformed into powder. Photography by Jesse Burke

Business is mushrooming at RI Mushroom Company. Based in West Kingston, the certified organic indoor mushroom grower and distributor sells 40,000 to 50,000 pounds of exotic fungi each week to 110 Whole Foods stores and acclaimed restaurants from New Jersey to Maine, as well as locally to Dave’s Marketplace and farmers markets.

The company’s chief executive officer, Mike Hallock, and chief operating officer, Bob DiPietro, started RI Mushroom Company five years ago in an eight-by-eight-foot room in the basement of Sweet Berry Farm in Middletown. They expanded to the 10,000-square-foot space where they now function out of three growrooms in a warehouse located next to a lumber yard and a craft brewery. Their sophisticated front offices are brightly decorated with mushroom photography, art and stylish furniture, and the mushroom farmers wear sport coats and dress shirts, instead of a farmer’s trademark overalls.

RI Mushroom Company works with growers, retailers and restaurants across the country, and its branded trucks ship mushrooms daily to New York City and back and forth from Pennsylvania. They package and distribute various growers’ harvests for retail buyers, growing only about 10 percent of their own product, including high-end exotics like golden oyster, shitake and lion’s mane. Mushrooms are shipped in from a large Pennsylvania grower and from all over the United States and even internationally; truffles are flown in from around the world.

The partners are currently awaiting the approval of a $11.5 million request of a $20 million bond from the state to build a $115 million, two-and-a-half-million-square-foot Agricultural Innovation Campus at the University of Rhode Island. They are working with American Ag Energy, Verinomics and URI to bring indoor agriculture technology to the Northeast for growing their mushrooms, as well as other crops like lettuce, tomatoes and cucumbers that could be harvested year-round. “So, we’re potentially going from sixty-four square feet to two-and-a-half million,” Hallock says. “That’s pretty wild.”

Hallock is also a musician who worked for Columbia Records in the international tour marketing department and handled Sony’s international business affiliates in more than twenty countries by managing tours for Beyoncé, Bruce Springsteen, John Legend and more. He says his previous marketing and art experience helped with building connections with other mushroom farms, recruiting retailers to carry their products and creating bright branding for their business.

Hallock and DiPietro met at a farmers market when Hallock was working for another indoor agriculture business where he was growing microgreens and mushrooms. DiPietro, a former chef, brought him on board for the pilot program he started at Sweet Berry Farm.

“There’s a lot of third-generation farms that have been successful and know how to grow product, but one of the things they are struggling with, and one of the reasons I think RI Mushroom Company has been so successful, is because they haven’t changed with the times from a marketing perspective,” Hallock says. “They aren’t doing a great job with design and presentation. We brought that to them and they see value in it.”

Inside the highly controlled, certified organic growrooms are shelves of golden oyster mushrooms growing out of plastic bags that are filled with sawdust and
inoculated grain, sitting on top of slabs of hemlock. Bulging yellow masses that look like giant buttered popcorn kernels creep out of pinholes in alien-like formations. The rooms are steamy and set to a very specific 63 degrees with humidity between 90 and 95 percent. The exhaust and fresh-air intake system prevent a buildup of carbon dioxide, which mushrooms give off as they grow. At the pending Agricultural Innovation Campus, they plan to build natural gas-fired power plants that produce their own power and heat.

For Hallock and DiPietro, the mushroom is certainly a symbol of their growth. “We double in size yearly, so we’ve been trying to slow that down at some level because it’s just insane,” Hallock says. “We started in a closet and I never thought I’d walk into Whole Foods in Columbus Circle in New York City and be like, ‘Wow there’s all our mushrooms.’ ” rimushrooms.com 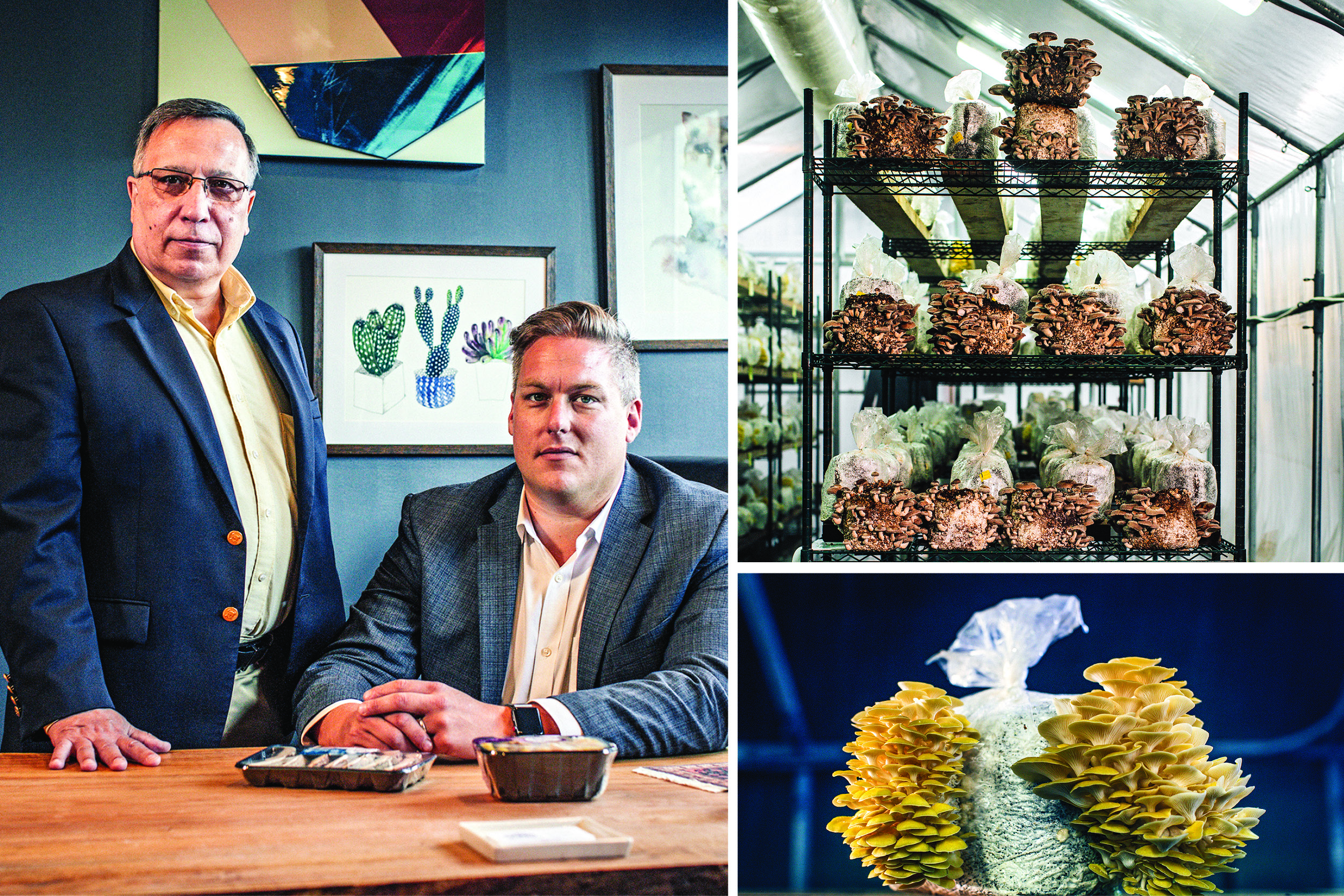