A work-share spot is coveted. One participant says he’s thankful he’s had the chance to sneak in on the waitlist. He holds up a yellow round patty pan squash, which is his favorite. “When you serve good ingredients, it’s less what you do to them, and just letting them sing,” he says.

The biggest challenges to farming have been the weather, wildlife and the physical labor. Goldsmith begins her days around seven in the morning, and finishes up by 6 p.m. “I didn’t know how tired I would be,” she says. “I knew it would be hard. But there are days I fall asleep at eight because it’s so exhausting.”

They had to build an eight-foot-tall fence around their crops to keep the deer out, and every day, there’s another “fire” to put out. On this day, the hose exploded because the water was left on overnight, and the fixtures rusted together, so they couldn’t disconnect the hoses. It took awhile to get the water back up and running again for necessary irrigation on a hot summer day. It’s a lot of work for the one-woman operation.

“Jordan is the bulk of our labor at this point. There are a lot of goals that are just really challenging with it just being
Jordan,” says Denmark. “But it feeds into what our future looks like and being able to hire staff to help us.”

The couple embraces the change of scenery — from the inside of a windowless kitchen to the outdoors — as they make plans for the future, which will involve moving to a new location at some point. They’ve made it easier on themselves to pack up when it’s time to go. The shelter is transferable, and they purchased a portable trailer cooler through a LASA grant, where they store produce for delivery. “We tried not to invest much in the property itself, in buildings or
infrastructure; that way when we do find our own spot we can transfer our investments,” Goldsmith says.

They just might be the first mobile farm in Rhode Island. moonrosefarm.com 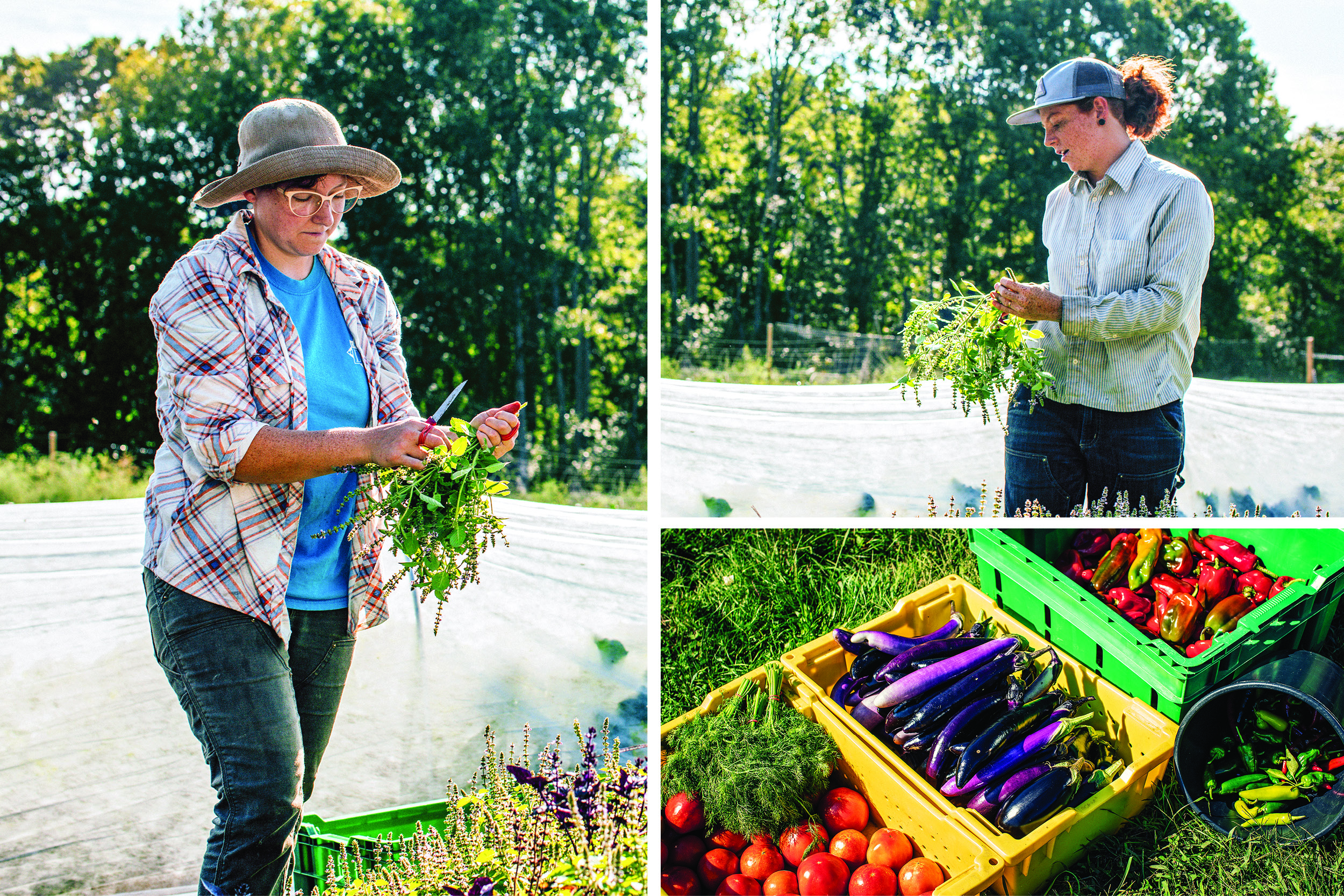 Feta cheese platters appear in front of each guest at the Chef Challenge at Yoleni’s Greek restaurant in Providence. The dinner is part of a farm dining series where guests experience a five-course meal made with mystery foods from local farms, and they won’t find out what they are eating until the meal is served. This particular dish is plated like abstract art with finely chopped pieces of cucumber, watermelon and olives intertwined with swirls of balsamic reduction. One block of feta cheese is dusted with a surreptitious forest green powder.

“What is it? Does anyone know?” asks someone at a neighboring table eyeing the green crust. It could be a form of mold on the cheese, but it is much too pretty with its brilliant green hue. The feta is tangy and salty with a bit of earthiness from the mystery ingredient.

After empty plates are hustled away by servers, guests find out it is spirulina, a form of blue-green algae that’s been dehydrated and transformed into powder by a local company, Agcore Technologies in Cranston. The powder was also blended into dough for the ravioli course, and it appeared as a crumbled topping on a crudite plate of eggplant puree and carrots. Agcore is a greenhouse farm that produces the SunFresh Proteins brand of food products, including spirulina powders for blending into juices, smoothies, teas and more, and the CrunchLina line of algae-accented nut, raisin and seed snack clusters.

Spirulina has anti-inflammatory benefits and contains antioxidants, plus it has more protein in it than steak: It contains 58 to 63 percent plant-based protein as opposed to beef’s 25 to 27 percent.

To get to the spirulina farm, drive through Cranston’s corporate complex where Pepsi and Ross Simons are located, then go off-roading down an unmarked bumpy dirt road that ends in front of two large greenhouses and a trailer, with the Cranston landfill looming in the background. Inside the two greenhouses are 425 tall, cylindrical tanks bubbling with blue-green algae and water inside of them. It looks like a science experiment gone wild, but it’s a modern-day, vertically integrated farm that doesn’t require expensive farmland to grow food. Agcore Technologies founder and owner Larry Dressler and team can harvest four or five times a week, all year long, including winter, and water is repurposed for the next batch, which continuously regenerates.

Dressler and his wife, Amy, explain how they hope to make spirulina the next superfood because of its nutritional benefits. Tom Brady incorporates spirulina into his special TB12 diet, although it may not be their specific brand.

“I’ve been told that one gram of spirulina is equivalent to 1,000 grams of conventional vegetables,” says Dressler, adding that they sell the products at two local farmers markets in Charlestown and Casey Farm in Saunderstown, as well as at more than 100 retail locations in the New England area and Florida, where their son lives and promotes it. “Mothers at the farmers market whisper to us that they mix it in with their kids’ pancakes,” he says.

The unconventional plant-based protein source has been used in research by NASA, and it could be the future of food. Here’s some food for thought: One day, the Earth will be home to more than nine billion people, and it will be challenging to have enough resources to feed the world’s population. “We need to find new types of products that don’t damage the environment, and speaking on behalf of algae, I can grow in fresh, salt or brackish water,” Dressler says. “I don’t need farmland, so I am not using soil, I just use flatland with access to sunlight. We could be putting them on landfills as long as they don’t sink.”