Polyface is similar to her own story in that owner Joel Salatin had inherited the land from his father and brought it back to life. “He loves the land, and that’s how I feel about it. I just love it,” says Steere, nearly tearing up when she talks about it.

“Pig, pig, pig,” she says, as her pigs take a break from chomping wild blackberries to greet her. She no longer names her animals because she says she grows too attached to them.

The Polyface experience formed her future path, even though her father, who saw the farm go out of business as a teenager, was hesitant to let her give the farm a second chance. “I felt the community and connection to the farm and all the animals, and I just knew it was the right thing,” she says. “I came back here and jumped right in. I bought chickens and cows before I even got home, which was probably good, because after a few months in, I realized how hard it was.”

Once she made the choice, her dad was the first one to call and tell her just how much farmers were getting per pound for locally raised, grass-fed beef. She knew it could be successful, but didn’t anticipate some of the losses along the way.

Steere started out with 200 laying hens, but lost many of them to coyotes, not realizing just how aggressive wildlife can be. “[At Polyface], they had thirty years of wildlife control, and really good livestock guardian dogs,” she says, “while there were no chickens here for 100 years and suddenly there were 200 tasty chickens for the coyotes.” She has a dog named Odin, an Antolian Shepherd rescue, who isn’t a guard dog and is mostly a “needy baby” that keeps her company. She’s since invested in better fencing and a chicken coop that locks up at night.

It’s been a learning experience as she determines the best sales tactics to make her farm more profitable. Last winter, she worked four jobs just to be able to manage financially. She was a horse farm sitter, a sales associate at REI and she worked for the Northeast Organic Farming Association, in addition to operating her farm. “Hopefully I won’t have to do that again this winter,” she says with a laugh.

Selling directly to customers through the onsite farm store has been most successful for her. She’s able to make double on eggs she sells at retail rather than wholesale. “I think it’s the only way small farms can survive, especially meat farms, where the margins are so low,” she says. She offers an add-on option for her locally raised meat as part of nearby Hocus Pocus Farm’s CSA, and she visits two seasonal farmers markets including Armory Park in Providence and the Wintertime Farmers Market at Hope Artiste Village in Pawtucket. She also started offering her products on the WhatsGood app for pickup at local breweries or for home delivery. “This year I realized I have the luxury of figuring out what the best sales channels are for me, and taking my time with that,” she says.

Steere hopes to one day be able to host classes and events — perhaps even farm dinners — on the property, and to leave the land in better condition for the next generation. She’s also a member of the Young Farmer Network and she testifies at the Rhode Island State House for farmland preservation.

“Almost everyone who comes here has a story from their childhood about a farm,” she says. “If we don’t save the farms, our kids and grandkids won’t have those stories.” deeprootsfarm.org 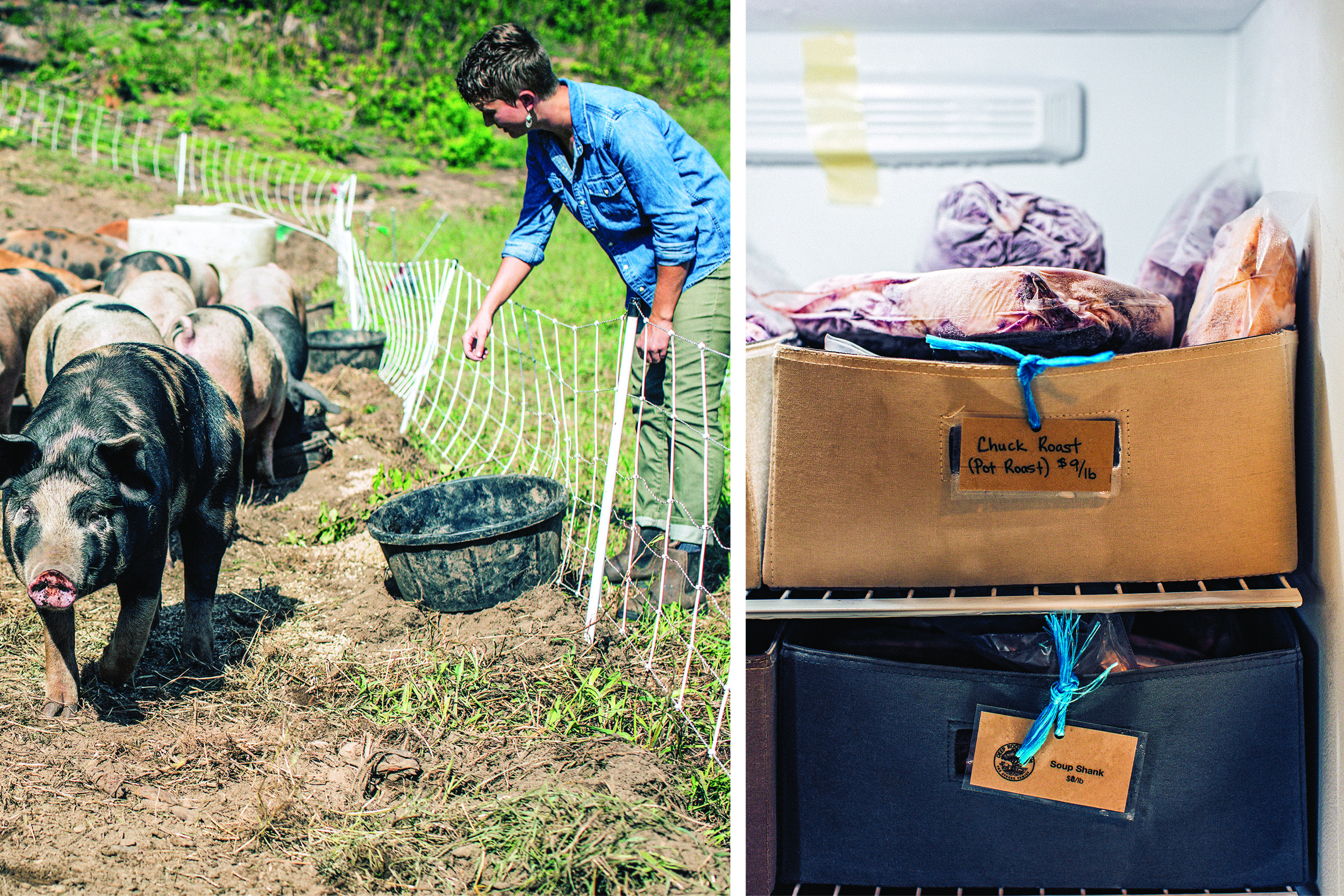 The vegetables are about to take a bath at Moonrose Farm in Cranston. An antique pink and white bathtub sits outdoors under a popup shelter next to a greenhouse. As it’s filled with water, vibrant green zucchini and yellow summer squash bob just below the surface. Former full-time chef turned farmer Jordan Goldsmith and Gracie’s executive pastry chef and part-time farmer Melissa Denmark wash veggies in large batches for their CSA members.

The married couple and farm co-owners are on year two of a five-year lease for the three acres of pristine land that they’re cultivating at Hurricane Hill in Cranston, fifteen minutes outside Providence. They practice organic farming, though they are not certified, and they turned the non-agricultural soil on which their farm is located into fertile farmland almost by hand, relying on expertise from farming mentors. “We may lose some of our yields to pests but choose to avoid chemicals because we want our food to be as nourishing as possible to the community,” Denmark says.

One day they hope to own their own farmland and open a cafe serving breakfast and lunch on site. It’s been hard to find land they can afford to purchase right away because Rhode Island has the priciest farmland in the United States. While they’re working on the leased land, they’re thinking about permanent property, and hoping to take advantage of USDA grants and loans geared toward helping new farmers.

Goldsmith, twenty-eight, and Denmark, twenty-nine, forayed into farming after Goldsmith left the restaurant business for greener pastures. She still cooks at Eli’s Kitchen in Warren in the winter months when she’s not farming, but she says she’s happier spending her days outdoors, alongside industry people who participate in work-shares and volunteers. Her eight-year-old Scottish terrier, Jaxon, explores the area around the popup shelter while a group of three work-share helpers wash out bins and sort the vegetables.

“We always daydreamed about having a farm eatery, so that’s our end goal,” says Goldsmith. After leaving restaurants, she apprenticed at Scratch Farm for two and a half seasons to learn the growing basics before striking out on her own with Denmark. Denmark still works full-time at Gracie’s and comes to the farm to work on her days off. She’ll often gather herbs and flowers for desserts at the restaurant and Ellie’s Bakery.

The farm leases the land from Drake Patten, owner of Hurricane Hill and Cluck home and garden store, located down the street from where Moonrose’s acreage is planted. “We wanted to do the farming part first to gain enough capital so that we can purchase land somewhere,” says Goldsmith, adding that she is thankful to Patten for making their business plan even possible.

As a human-powered farm, they sow and harvest all on their own, growing tomatoes, eggplant, cucumbers, lettuce, squash, green beans, peppers and more, plus a field of flowers for bouquet sales at local bakeries including PVDonuts, Rebelle Bagels and Ellie’s. They also have an apiary on site for harvesting honey. Moonrose Farm shares the greenhouse with Lucayda Farm, which grows transplants, and Radia Herbs, which cultivates herbs for medicinal and skincare purposes. Inside their greenhouse section are hundreds of garlic bulbs laid out to dry for storage.

Moonrose Farm forgoes farmers markets for its CSA. Shares sold out the past two years, feeding sixty members for the whole season, and they added another ten for July and August because of the surplus of veggies during those months. “It’s predictable, because everyone pays at the beginning, so we know what our budget is going to be for the season,” Goldsmith says. She only advertises the CSA through Facebook and Instagram, and it quickly sells out by word of mouth. They might expand the CSA to Providence or sell at farmers markets next year, but for now — with the farm profits and Denmark’s restaurant income — this is a financially sound plan for them.

Moonrose Farm also has several restaurant clients who can order produce online through a partnership website, New Roots, which combines their offerings with Hocus Pocus Farm in Chepachet, for easier bulk ordering.

Goldsmith is the primary worker on the farm, but there are about twelve work-share participants who chip in by providing four hours of work each week in exchange for a free CSA share. “We stress that it’s like a job and everyone is expected to make up their shift if they can’t make it, because that’s like us hiring a part-time person,” says Goldsmith. “Most people are in the industry and work in a restaurant.”