This sunny abode in Wakefield takes going green to a whole new level.

The board and batten siding is Eastern white pine, a renewable material. A rain screen behind the siding increases the pine’s longevity and reduces the risk of leaks. Photography by Ben Jacobsen.

When people use the term “energy efficient” to describe home building, images of solar panels and low-flow showerheads come to mind. But there’s another method growing in popularity that takes the concept several steps further. Called passive building, it follows rigorous standards starting at the design phase to create a building that has a significantly reduced ecological footprint. “It’s not about adding products to a house to make it better. It’s a fundamental change in the approach to how you’re building houses,” says Stephen DeMetrick, the state’s only certified passive house builder, who constructed Rhode Island’s first passive home, completed in 2016. Although new to the Ocean State, the concept has been around for several decades. Developed in Germany in the 1970s, the first passive house in the United States was built in 2003. There are now around 180 single-family passive houses in the country. “Getting more people to build passive homes just takes a simple paradigm shift. It’s as simple as putting your pants on starting with the left leg instead of the right,” DeMetrick says 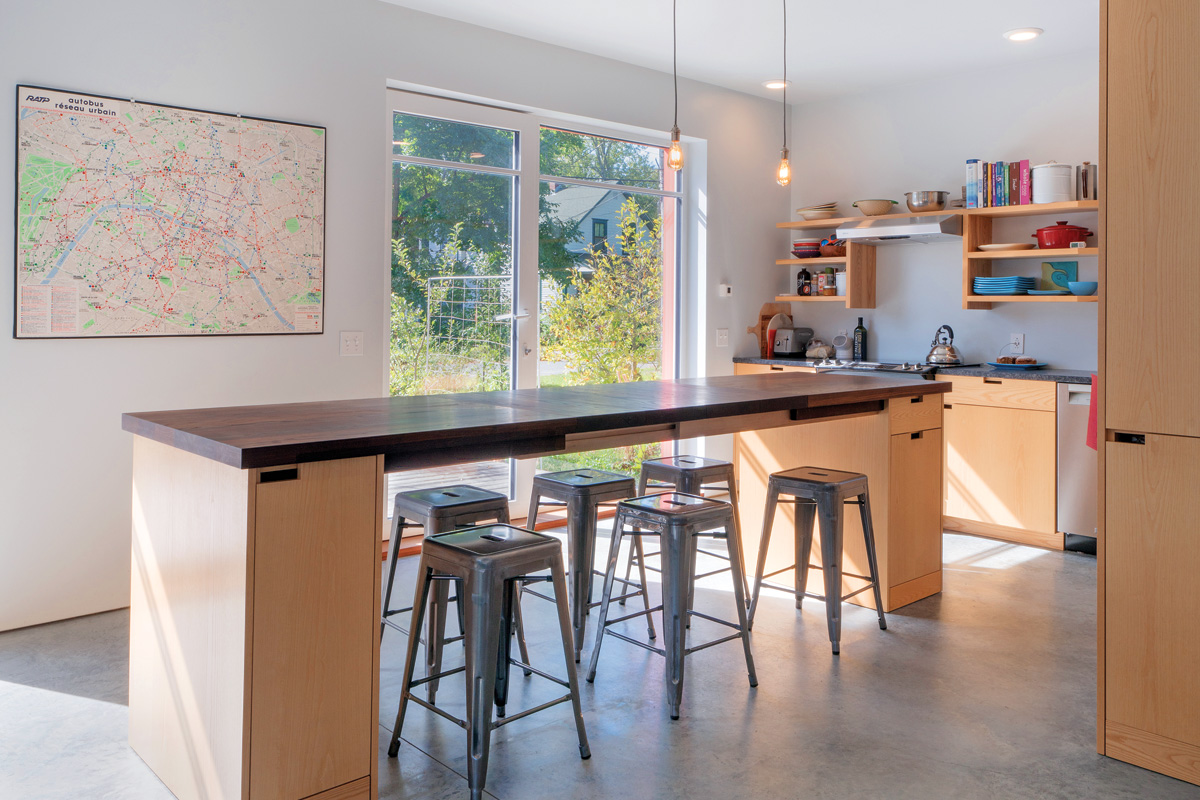 The kitchen island expands to accommodate up to twenty people, while the top is made from thermally modified ash that resembles more expensive walnut. Photography by Ben Jacobsen.

Passive home building values quality over aesthetics, DeMetrick explains. In traditional house building, the focus is often on the look of the home, resulting in the use of inferior materials and a final product that can be drafty and leaky, no matter the size or cost. “Creating a passive home is really about building the highest quality home you can build,” DeMetrick says. That means an airtight design using materials that minimize heat loss, a generous layer of insulation and minimal mechanical systems. In the state’s first passive house, located in Wakefield, the infrastructure consists of a single mini-split system that heats and cools the entire 1,800-square-foot, three-bedroom building, an electric heat pump hot water heater and an energy recovery ventilation system. The ventilation system replaces the home’s air with fresh, filtered outdoor air approximately three times an hour. Not only is maintenance minimal, but heat stays in during the winter and out during the summer. As a result, the family of four is not only living more comfortably, but also with fewer expenses.

The owners saved on elements like the upcycled bathroom vanity, while putting more money into high quality, energy-efficient windows and mahogany sills. Photography by Ben Jacobsen.

While quality comes first when building a passive house, DeMetrick is quick to point out that aesthetics needn’t be sacrificed. For this house, “we used all normal construction techniques and all the materials came from a traditional lumberyard with the exception of the windows and ventilation system,” he explains. Demetrick, working with architect Steve Baczek, designed a structure that not only reflects the owners’ preference for a simple, modern look but stayed within their budget. The board and batten siding, made of Eastern white pine, has a rain screen behind it to promote ventilation and inhibit mold and rot, while the upper floor’s fiber concrete board and batten siding is equally sturdy. Inexpensive concrete floors on the first floor fit the owners’ aesthetic, as does the streamlined kitchen with expandable island. Recycled materials, like the tub and bathroom vanity, were used when possible. In keeping with passive house certification requirements, all finishes are low and zero-VOC and water fixtures are EPA Water Sense certified. 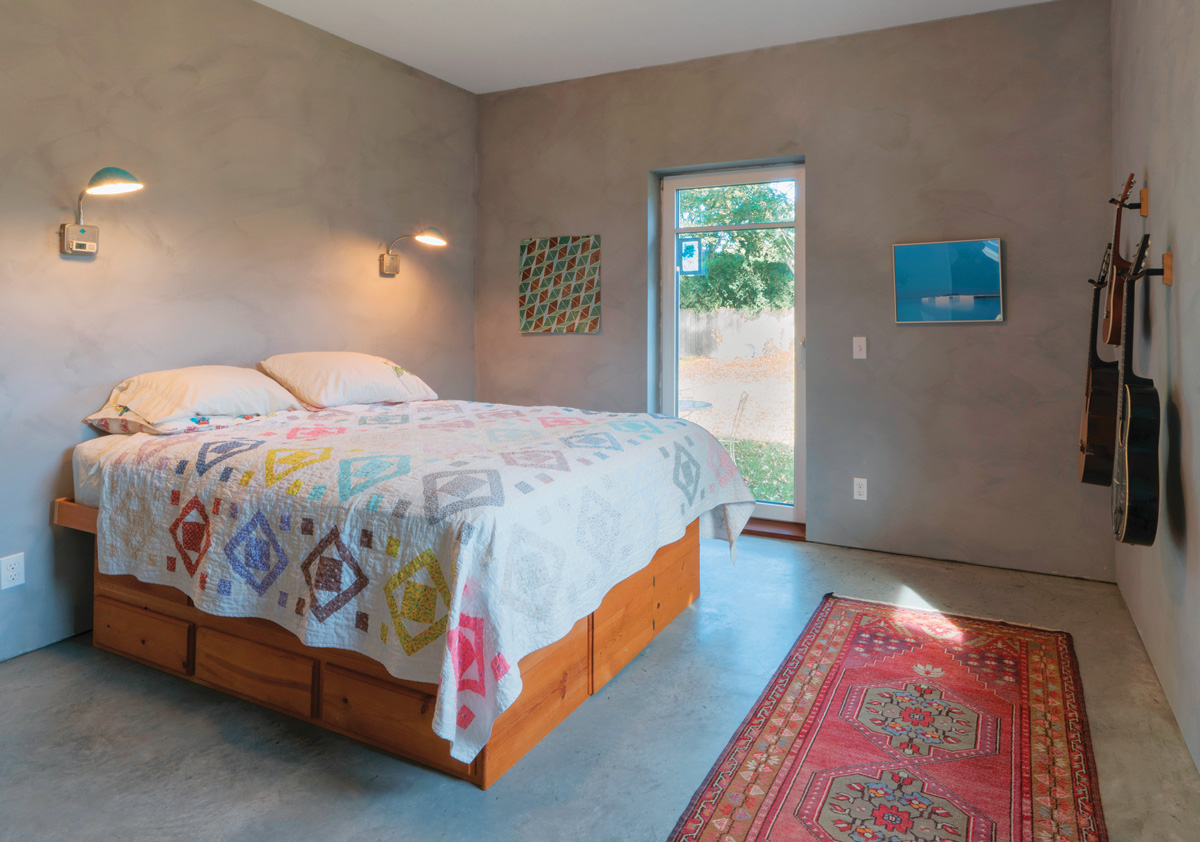 The requirements for passive house certification — which are set by the Passive House Institute U.S. — are strict. The lack of gray area is what DeMetrick likes best about the process. “Certification forces you to engineer the house before you start: You look at the site, conduct a solar analysis and calculate heating and cooling loads based on the design,” he says. “Based on the results, you may have to make the windows bigger, or shift the house 5 or 10 degrees. If that’s driving your design then you can get there very cost effectively. But if you design the house first and then try to add the program in, it doesn’t work.” DeMetrick says the concept is catching on in Rhode Island. Since building his first passive house, he’s completed another one. The key, he says, is getting consumers and contractors onboard so there is both supply and demand for the product. Once people see the benefits of this building method, DeMetrick is confident it will be an easy sell. “There are so many choices to make when building and when making the correct choices, it can have a tremendous effect on your impact on the Earth.”