Ross McCurdy has set up an experiment to fly this airplane with a blend of 50/50 biofuel – that is, the fuel is 50 percent the standard Jet-A fuel that the airplane normally uses, and 50 percent SkyNRG biofuel. 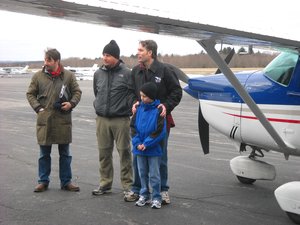 On a freezing Saturday morning at the end of February, the last thing I expect to see is a crowd on the ramp of North Central Airport, in Smithfield. Most Rhode Islanders are surprised to learn that we have six little airports scattered around the state, besides our well-known T.F. Green, and if you visit North Central, even on a weekend, it's generally pretty quiet. But this is a diehard crowd, comprised mainly of flying-club members, high-school kids and the media. Ross McCurdy, a science teacher at Ponaganset High School, did a great job of getting the word out about his interesting flying experiment.

McCurdy is a tinkering kind of guy, and he's worked hard to inspire students who like to get involved and make things. He's put them to work on solar-energy projects and drove across the country with them in a truck fueled by recycled cooking oil, to make sure his kids learn something about technology, the environment and science. On Saturday, he's teaching them another lesson – that the future will be what we make it to be.

His vehicle for this is a shiny blue-and-white Cessna 182, a little four-seat airplane with a beefy diesel engine. With his partners from the Paramus Flying Club, based in New Jersey, McCurdy has set up an experiment to fly this airplane with a blend of 50/50 biofuel – that is, the fuel is 50 percent the standard Jet-A fuel that the airplane normally uses, and 50 percent SkyNRG biofuel, made in the Netherlands from recycled cooking oil. This will be the first flight for this kind of fuel in this kind of airplane.

When I arrive, Ross and Chris Howitt, president of the flying club, are in the cockpit, running the engine up to flying speed, and checking that all systems are go. Then, back on the ramp, they take a few minutes to explain to the crowd what this flight is all about. They're planning to fly to Kitty Hawk, North Carolina, about 500 miles away, spend the night, and fly back the next day. They want to show that little airplanes like this can fly very efficiently, with very low emissions, using renewable fuel. They want to prove that this new biofuel is safe and practical for this kind of engine.

With all the interviews done, and the preflight checks complete, Ross and his crew – including his nine-year-old son, Aidan – climb into the Cessna and taxi to the runway. Everyone waits until we see them lift off and climb into the winter sky, their engine roaring, their bright wings glinting, headed to the place where aviation was born. They leave us with a message that there are new horizons yet to explore, and maybe a little airplane and a big imagination can help us to get there.

For more technical details about the flight, you can read Mary Grady's story posted on AVweb.com, an aviation news site, and listen to her podcast interview with Ross McCurdy.